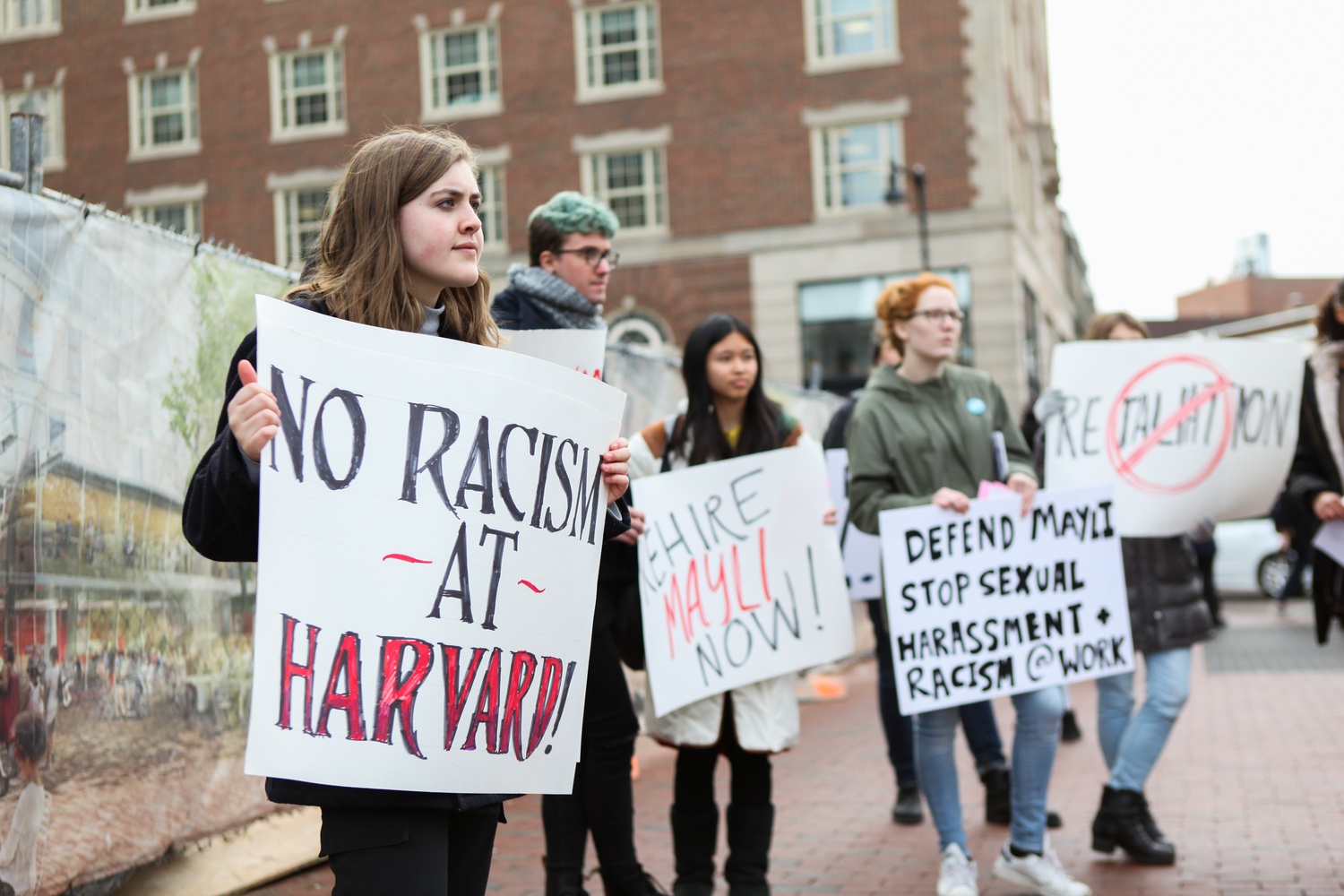 A group of about 30 students, Harvard union affiliates, and others crowded the sidewalk outside the Smith Campus Center Tuesday evening to protest the termination of former University Health Services employee Mayli Shing.

The picket marked the second demonstration in support of Shing since she was fired on Feb. 6 and is part of an ongoing campaign calling on the University to rehire her. As she did during the last picket, Shing claimed she was fired in retaliation after she made allegations of workplace racism and sexual harassment.

According to her termination letter, Shing was fired because of “insubordinate conduct in repeatedly disregarding instructions.” The letter specifically cites an incident in which Shing arrived at work 30 minutes before her shift began on Feb. 6, despite having been warned not to do so.

Geoffrey Carens, Shing’s union representative from the Harvard Union of Clerical and Technical Workers, said two of Shing’s work evaluations, though, commended her for arriving before her regular hours. Carens said the evaluations called her “extremely reliable.”

“It shows how incredibly arbitrary this whole situation was,” Carens said.

At the picket, Shing’s supporters marched in circles, chanting statements like “Survivors deserve justice,” and “No racism at Harvard.” Carens and other organizers distributed noisemakers and signs, and a few crowd members, including Shing herself, gave short speeches.

Since the first event, two new groups have decided to endorse their efforts: the Transgender Task Force, a student group dedicated to supporting transgender people and allies, and Our Harvard Can Do Better, a student group focused on combating sexual assault on campus.

“This is a group of people who are passionate and committed to seeing this through and making sure that Mayli gets rehired,” said Graduate School of Arts and Sciences student Andrew Keefe.

Lauren G. Fadiman ’21, a representative of SLAM, said in a speech to the crowd that she hoped the protest would have a broader effect on how Harvard workers are treated.

“Hopefully with a lot of work and a lot of shouting today on the street we can really see change in Mayli’s circumstances but also a change in Harvard’s workplace culture overall,” Fadiman said.

University spokesperson Tania deLuzuriaga did not offer comment beyond an earlier emailed statement after the first protest in February.

“As a matter of policy, we do not comment on individual personnel matters, but all complaints of discrimination and sexual harassment are investigated thoroughly and fairly,” deLuzuriaga wrote in February. “Harvard is committed to maintaining a safe, comfortable, and diverse working environment for all of its employees.”

In a speech at the conclusion of the picket, Carens said the groups plan to continue protesting until they achieve their goal to “get justice for Mayli.”

As they left the scene, demonstrators chanted in unison, “We’ll be back, we’ll be back.”