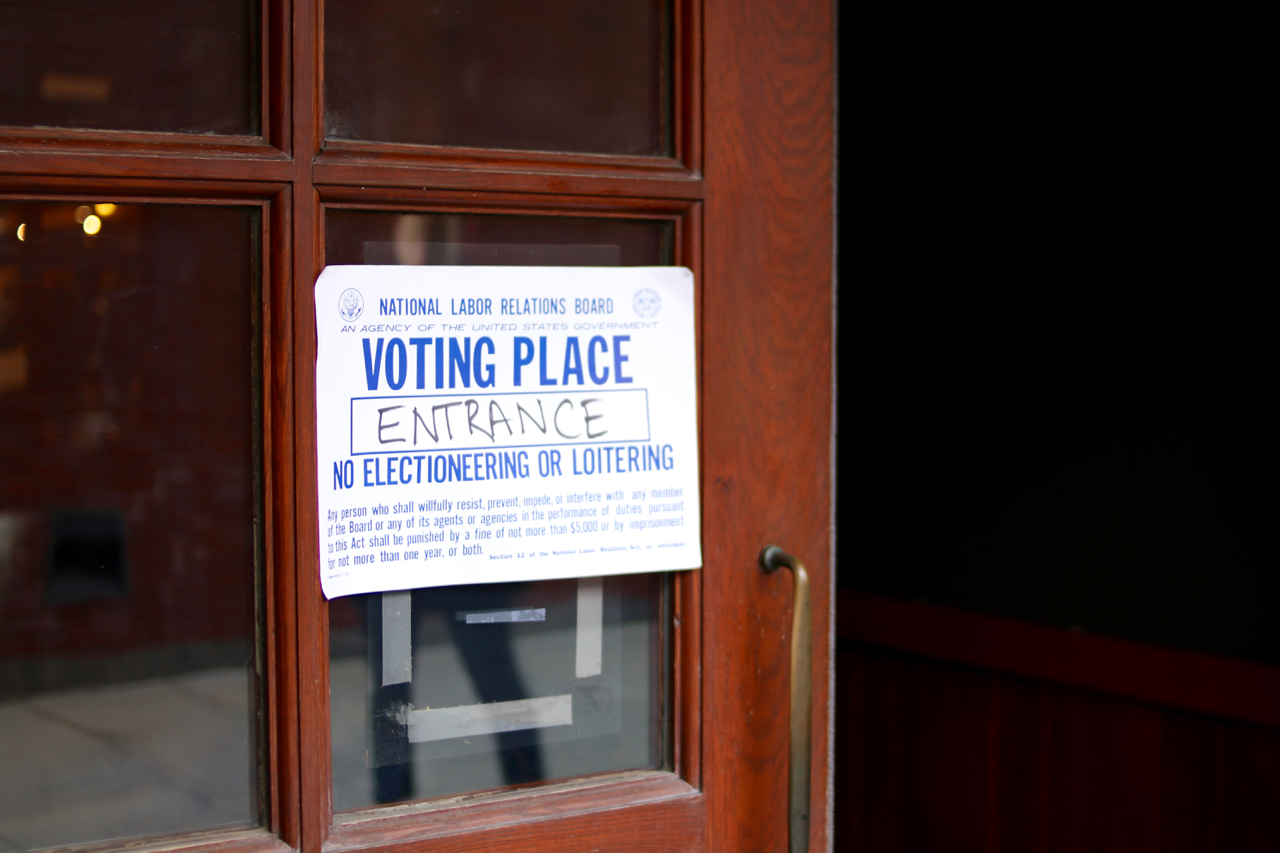 A sign marks the entrance to a voting site during the historic April 2018 election that saw a majority of eligible students cast their ballots in favor of unionization. By Amy Y. Li
By Shera S. Avi-Yonah and Molly C. McCafferty, Crimson Staff Writers

A Harvard representative repeatedly declined to answer a question asking whether the University will begin to collectively bargain with student employees following a vote by eligible teaching and research assistants to unionize last week.

Over the course of a two-day election held April 18 and 19, eligible graduate and undergraduate teaching and research assistants voted to approve Harvard Graduate Students Union-United Automobile Workers’ proposal to collectively bargain on their behalf with the University.

The final vote count showed 1,931 ballots cast in favor of unionization and 1,523 against.

Under NLRB procedures, both Harvard and the union have seven days to raise objections to the election with the agency’s regional office.

Following Harvard’s first unionization election, held in Nov. 2016, both HGSU-UAW and the University filed separate objections to the vote. In their briefs, the union’s attorneys argued the University-generated eligible voter list was inadequate and incomplete, calling on the NLRB to overturn the Nov. 2016 election. University representatives also brought their own objections, contending NLRB officials had improperly invalidated a ballot that had writing on it. Following over a year of legal back-and-forth that saw two separate appeals and three NLRB decisions, the labor agency ruled to overturn the 2016 vote, mandating a second election.

If the University chooses to challenge the results of the 2018 election, the school could allege inappropriate conduct during the vote—or it could challenge the legitimacy of graduate unionization more broadly, Gould said. The precedent governing graduate students’ ability to unionize, which the NLRB has affirmed and overturned before, was most recently affirmed in 2016 when the agency permitted a unionization election at Columbia University to proceed.

Labor experts and observers widely believe the board, which is currently majority Republican, will overturn the Columbia precedent if it gets the chance to hear a case on the matter. Any objection—regardless of its scope—that reaches the national board, according to Gould, could ultimately result in a board decision that reconsiders the validity of graduate student unions.

“[The University] could take that route, or, without taking objections, they could simply refuse to bargain on the theory that Columbia University is not good law,” Gould said. “If they don't want to bargain, I would think they'd be in the driver's seat given the composition of the Board.”

Because the legal language governing employers’ duty to bargain is “not especially onerous,” Rogers said, the most likely path forward—should Harvard want to avoid negotiations—would comprise refusing to bargain with HGSU-UAW.

“It’s very common that, when a union first organizes, they have a great deal of difficulty getting to a first contract,” Rogers said. “They do it as a way of challenging the election results.”

Graduate students at Columbia University voted a week ago to authorize a strike following the administration’s refusal to bargain with the campus union, Graduate Workers of Columbia-United Automobile Workers. Columbia graduate students have separately filed an unfair labor practices claim with the NLRB. This method forms the most common path of recourse for unions seeking to protect their bargaining positions, Gould said.

Gould added Harvard could also agree to recognize the union and participate in negotiations. Union organizers have previously said they consider the University’s assent to holding an election as equivalent to a commitment to bargain.

“Harvard has agreed to bargain. They have said they will not challenge our eligibility as student workers,” union organizer Abraham J. Waldman said in an interview after the NLRB vote count.