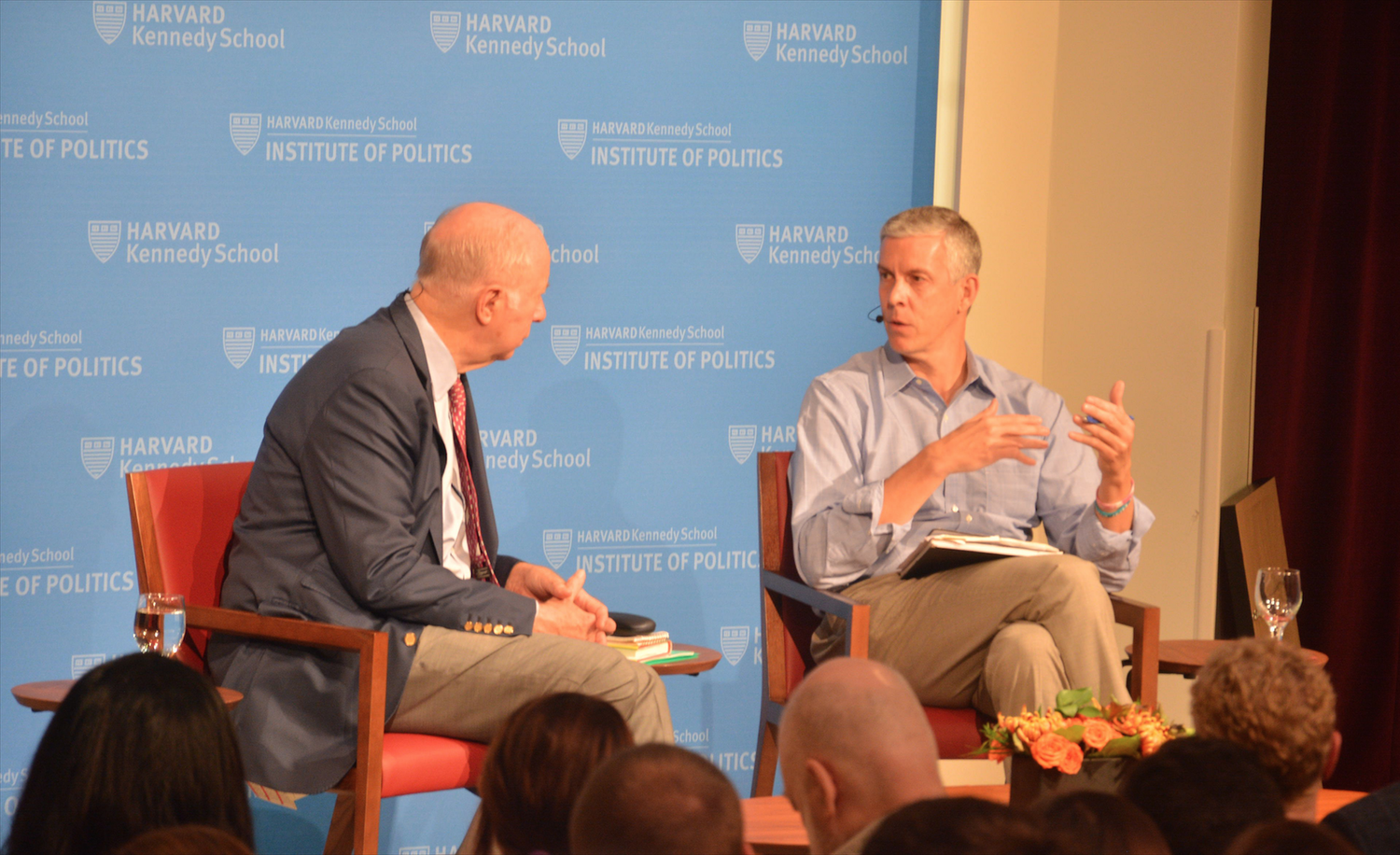 Arne S. Duncan ’87, former secretary of education and Harvard Basketball alumnus, took the stage Tuesday evening at the Harvard Kennedy School to share his insights about the present state of American education and reflect on his career in public service.

The event, titled “Education and the State of Affairs in Washington,” was held at the Institute of Politics and was co-sponsored by Harvard Men’s Basketball. Duncan was accompanied by moderator David Gergen, a professor of public leadership at the Kennedy School and former White House adviser.

Duncan discussed his perspectives on the current state of K–12 education and the persistent inequality in educational opportunities in American schools. The former secretary criticized the administration of current U.S. Secretary of Education Betsy DeVos under President Donald Trump.

Duncan delivered a blunt assessment of the educational philosophy of the Trump administration, claiming that officials' silence and inactivity on K–12 education reform are deliberate.

He was also critical of the state of teacher training in America, referencing a survey that stated that two-thirds of education school graduates felt that they were not prepared to enter the teaching profession.

“If two-thirds of doctors said they were unprepared to practice medicine, we would have a revolution in this country,” Duncan said. “But we don’t value teachers. We don’t value education.”

Duncan argued that the issue of education is not salient in elections and public policy debates. He cited stagnation in multiple areas of student achievement, including math scores and college completion rates, as factors contributing to the decline in America’s standing as a world leader in education.

When pressed about several policy decisions he made as former President Barack Obama’s education secretary from 2009 to 2015, including the introduction of Common Core and the controversial federal grant program Race to the Top, Duncan mostly defended his record of advocating for “higher” content standards and greater teacher accountability.

The former secretary of education concluded the discussion by commenting on gun violence and its effect on urban schools, reflecting on his own childhood experiences in Chicago and his current non-profit work. He emphasized the importance of youth advocacy in the wake of the shooting at Stoneman Douglas High School in Parkland, Fla. and said it has stirred public activism despite relative inactivity following several previous school shootings.

Currently, Duncan is a managing partner at Emerson Collective, an organization focused on initiatives in education, social justice, immigration, and the environment.