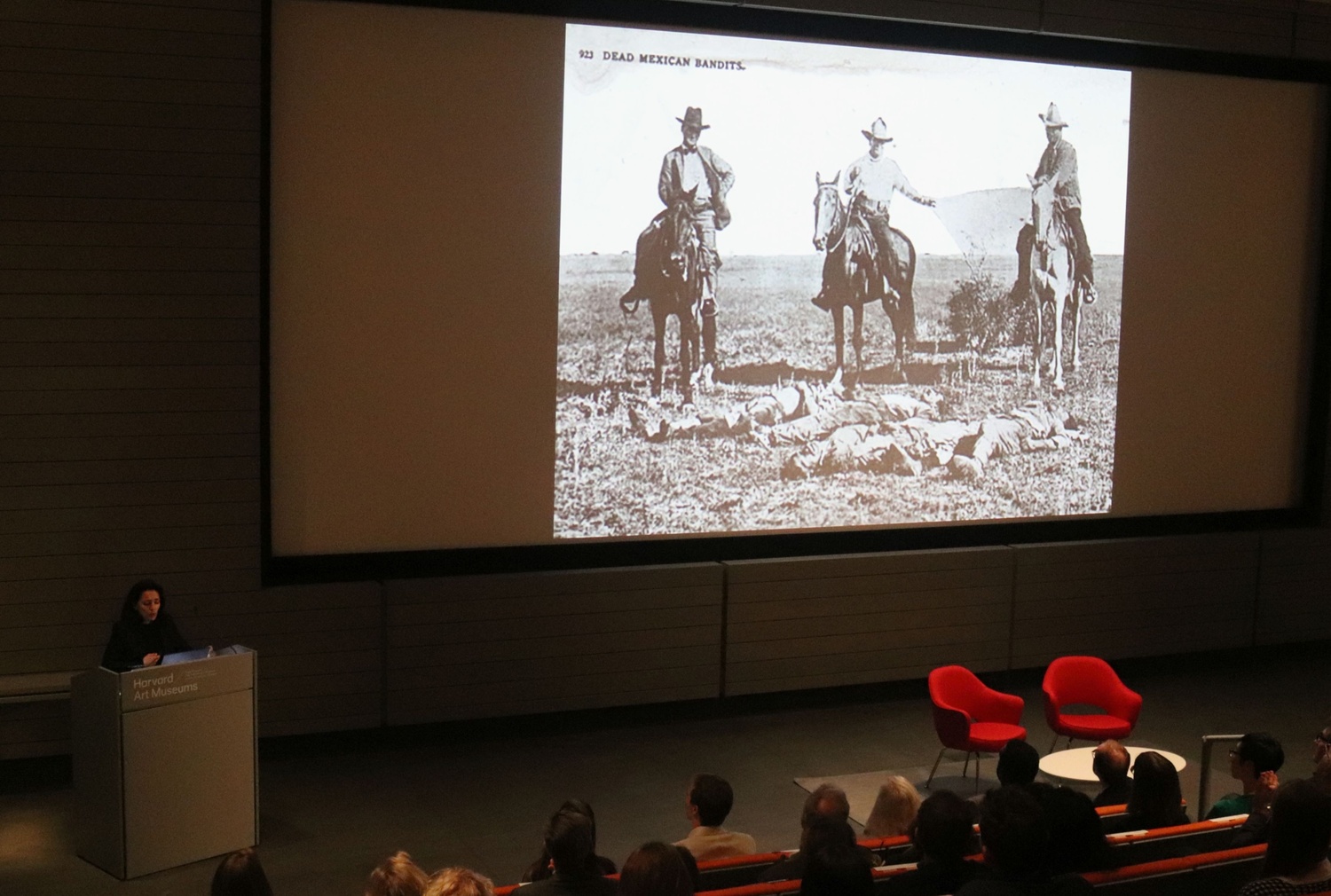 Artist Teresita Fernández discusses her work in connection to her art instillation Autumn (... Nothing Personal) during a lecture at the Harvard Art Museum on Thursday. By Kathryn S. Kuhar
By Aurelia S. Han, Contributing Writer

As Teresita Fernández’s temporary art installation “Autumn (...Nothing Personal)” enters its last days in Tercentenary Theatre before it is taken down on Oct. 1, Harvard has some final events planned with the artist. Fernández herself has been involved in many of these events, including a lecture called “Teresita Fernández: Wayfinding” at Harvard Art Museums on Sept. 20.

In a talk planned through a collaboration between the Harvard University Committee on the Arts and the Harvard Art Museums, Fernández shared many of her past works, her inspiration behind the installation, and her thoughts on how the public has utilized the piece. Then President Barack Obama appointed Fernández to the U.S. Commission of Fine Arts in 2011, and she is known worldwide especially for her work with public sculptures and art pieces dealing with natural phenomena.

Throughout its time in the hotspot of Harvard Yard, the installation has been the space for many events, including dance performances, poetry citations, and readings of the James Baldwin essay that inspired the piece.

Fernández said it’s also been inspiring to see how both small and large organized groups of people have found the installation as a space to gather on campus. Some of these groups that usually don’t have a space on campus, she said, can now come together and create.

“The idea is that if you can think of ‘public’ as really just being made up of many unique individuals functioning together, you can create a sense of public intimacy,” Fernández said. “That has always been the ultimate goal of the piece.”

During the talk, Fernández introduced many of her past works scattered around the world including “Fata Morgana” in Madison Square Park and “Blind Blue Landscape” at the Bennesee Art site in Naoshima, Japan. Using these pieces, she discussed the importance of the landscape of an installation. She urged people to not think of landscape as something passive, but rather as a way to have a larger conversation about place.

She then introduced to the audience the question of “Where Am I?” For decades, this question has driven her thought process before starting any piece, especially site-specific works, with understanding landscapes.

“I ask myself this question culturally, racially, socially, historically, geographically, politically, visually, architecturally, psychologically, demographically, legally, economically, environmentally, etymologically, and conceptually,” Fernández said. “It’s not just the physical coordinates, but it’s more about how does this place exist in our imagination and how we construct a narrative on who we are based on where we are.”

Dean of Arts and Humanities Robin Kelsey joined Fernández later on in the lecture for a conversation and question-and-answer session with audience members on “Autumn (...Nothing Personal).” Kelsey also serves as co-chair of the Harvard University Committee on the Arts, the organization that commissioned Fernández.

“What’s extraordinary about the question ‘Where Am I?’ is that it brings together questions of geography, history, identity, economics, and politics,” Kelsey said. “She is asking this question, but she is also inviting us to all ask that. By doing so, she is locating us at the intersection of a bewildering array of forces.”

Associate Professor of Landscape Architecture at the Graduate School of Design Rosetta Elkin, who attended the Sept. 20 lecture, said she has often had conversations with Fernández about the things that relate to their respective works and have found common ground in the elements concealed in pieces.

“Despite the ambiance and color the installation brings to the Yard, it provides public seating, which is usually not there,” Elkin said. “There is a social context for inhibiting seating, and her piece questions this quietly, but it’s worth considering.”

When choosing the location for the installation, Fernández said she was drawn to Tercentenary Theatre not only because of its iconic role in Harvard tradition. She said she deliberately wanted the landscape to create a physical, visually alluring structure where people would sit, gather, and linger, but also to create a space with less obvious social structure.

This public intimacy exemplifies itself to Fernández as individuals, groups, and organizations both off and on campus engage in activities, especially the readings of Baldwin’s essay.

“You can really see this in palpable ways when the essay is read aloud in the center of the circle,” Fernández said. “It’s a very private act to read, and there’s something very vulnerable and human about listening to someone who may have an entirely different relationship with the text read it aloud in a very exposed, public space.”

Kelsey also particularly enjoys the public intimacy of the different landscape elements working together with the art.

“I love the dialogue between the polycarbonate tubes, the trees surrounding the installation, and the people that go through or stop in it everyday,” Kelsey said. “There is something so beautiful about the invocation of time and seasons.”

Before the installation closes on Oct. 1, there are several more events, including a Baldwin Reading on Sept. 29.

“With the time left of the installation, there is something bittersweet and a little somber, but that ephemeral quality deliberately relates to autumn and to the title of the piece,” Fernández said. “It prompts an introspective mood that also relates to the social aspects of the project. As the weeks progress, it feels like the piece is really being embraced in the way that I intended — but it has also been used in ways that I could have never imagined.”