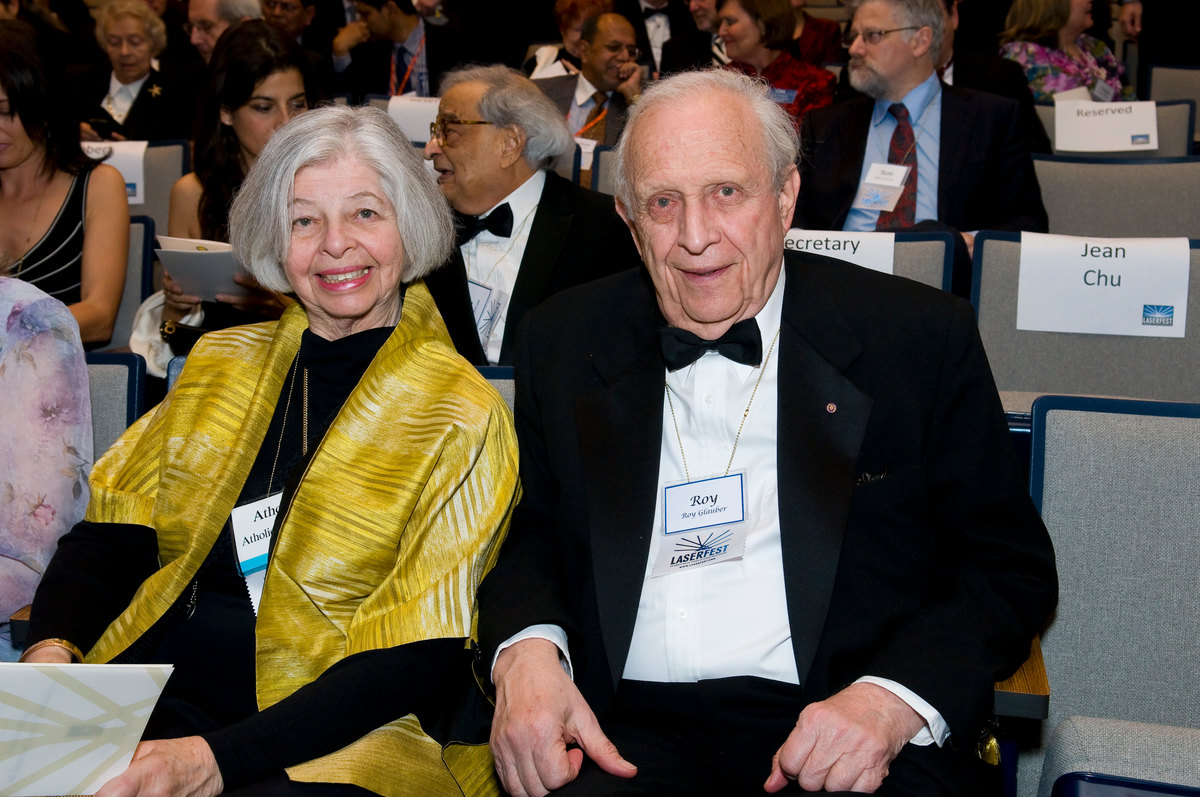 Harvard Physics Professor Emeritus Roy J. Glauber ’46, whose pioneering work in the field of quantum optics earned him a Nobel Prize in 2005, died on Dec. 26. He was 93.

Glauber’s work expanded physicists’ understanding of the behavior of light as a particle, or photon, by combining the study of optics with the study of quantum physics, which describes how matter behaves on atomic and subatomic levels.

Glauber got an early start to his physics career when he left college in 1943 at the age of 18 to work in the Theory Division of the Manhattan Project at Los Alamos National Laboratories in New Mexico. There, he joined dominant figures like J. Robert Oppenheimer and future Nobel-laureate Richard P. Feynman in determining the critical mass of the atomic bomb.

Long-time friend and colleague Sir Peter Knight said Glauber described his experience at Los Alamos as one that presented an “appalling, serious problem,” but a “fantastic nursery for understanding how physics is seriously done by the most talented of people.”

Glauber was one of the last living scientists to have witnessed the original tests of the atomic bomb in 1945.

After the war, Glauber returned to Harvard to finish his undergraduate degree and earn his Ph.D. After graduate school, Oppenheimer invited Glauber to conduct research at Princeton and subsequently arranged for him to replace Feynman in a teaching position at the California Institute of Technology.

Glauber returned to Harvard in 1952 and began ascending the academic ranks there, ultimately becoming a tenured physics professor. The development of the laser during that time laid the foundation for Glauber’s prizing-winning theory on the “quantum theory of optical coherence.”

This theory explains how the quantum structure of a laser beam’s “coherent light,” which has one frequency and phase, differs from the “incoherent light” emitted by a hot object, like an electric light bulb. It accounts for the behavior of the particles of light in the beam, thus providing a more comprehensive explanation of light’s dual properties as both a particle and a wave.

Glauber received one half of the 2005 Nobel Prize for combining the field of optics with quantum physics, and John L. Hall and Theodor W. Hänsch earned the other half of the prize for their work on precision spectroscopy.

Knight, a professor emeritus of physics at Imperial College London, said he believed the Nobel committee’s recognition of Glauber’s work was belated.

But because Glauber’s work was theoretical, the full force of its impact has taken many years to unfold.

“He had to wait for activity in quantum optics to catch up with him,” Joseph H. Eberly, a professor of physics at the University of Rochester, said.

“His level of career scientific activity was actually rather small if measured in numbers of published papers,” Eberly said. “But those papers were and still are enormous in terms of influence.”

Following his Nobel recognition, Glauber spent time traveling to conferences and workshops. He was an active participant in events hosted by the Optical Society of America, which made him an honorary member in 2008.

“That’s one of the highest achievements that we can give someone from our community,” OSA CEO Liz A. Rogan said. “He was incredibly generous with his time and with his interest in giving back to the field.”

Glauber also served on the Advisory Board of the Max Planck Institute of Light in Erlangen, Germany. Knight, who chaired the board, said he and Glauber visited laboratories together, where Glauber would engage with students.

“The fact that he was this big Nobel Prize winner might have been a bit frightening to new graduate students, but he put everybody at their ease,” Knight said. “He was an extremely witty man, charming, full of insight, and would tease people quite a lot just to make them laugh.”

He recalled watching Glauber’s antics at the annual satirical Ig Nobel Prize ceremonies, where Glauber would appear as the “Keeper of the Broom” to sweep up the paper airplanes traditionally thrown by audience members.

Knight described the Ig Nobels as an event dedicated to “deflating the preposterous,” something Glauber readily participated in.

“It didn’t detract whatsoever from the way that he was utterly serious about how he regarded physics,” Knight said. “He was absolutely devoted to physics.”

Glauber was born on September 1, 1925 and grew up in New York City during the Great Depression. His mother was trained as a school-teacher and his father was a traveling salesman, so Glauber spent the early years of his life on the road, taking apart hotel-room radios and electrical wires to see how they worked. He quickly developed an interest in science, building a reflecting telescope and a spectroscope before starting college in 1941.

He later married Cynthia Rich ’56 in 1960, but the two divorced in 1975. At the time of Glauber’s death, Atholie Rosett was his long-standing partner.

Glauber raised his and Rich’s school-aged children, Jeffrey M. Glauber and Valerie Glauber Fleishman '92, on his own, a responsibility he has stated he would not have sacrificed for “some number of papers I never got to write as a result.”

“Both Jeff and Val have families of their own now and are busy raising my grandchildren,” he wrote in his Nobel autobiography. “I envy them that privilege, and wish I had the opportunity to be raising them all myself.”

A previous version of this article incorrectly spelled the name of Atholie Rosett.

A previous version of this article incorrectly stated that President Donald Trump signed a bill into law that allocates $1.2 million over the next five years for advancing quantum information science. In fact, the bill allocates $1.2 billion.