Bryce Dallas Howard Paraded, Roasted, and Honored by the Pudding 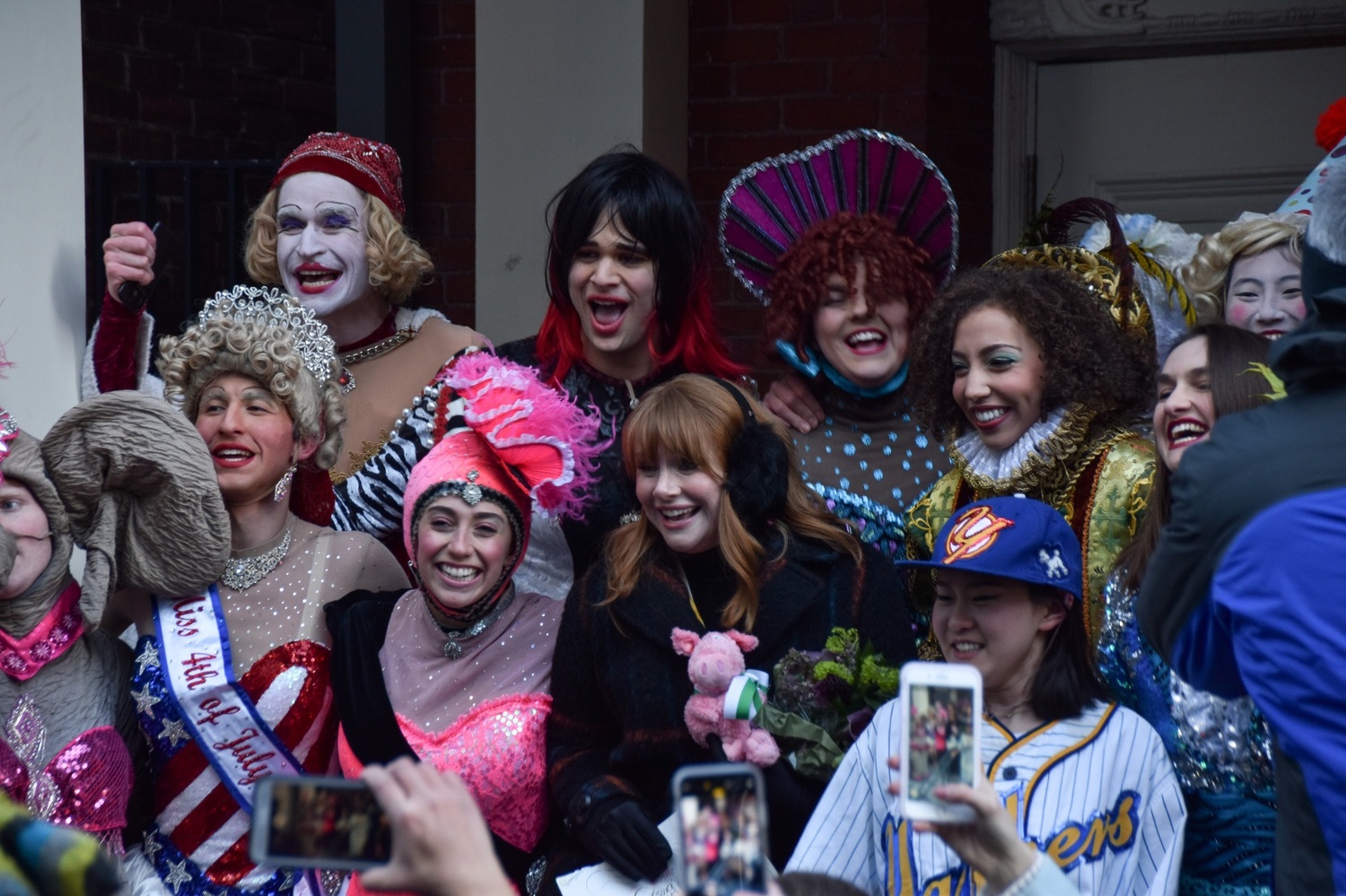 The Hasty Pudding named actor Bryce Dallas Howard as their 68th Woman of the Year. Howard paraded down Massachusetts Avenue Thursday alongside the Pudding's first mixed-gender cast since it began putting on an annual production in 1844. By Quinn G. Perini
By Isabel L. Isselbacher, Crimson Staff Writer

Keeping with decades of tradition, the Hasty Pudding paraded, roasted, and honored Bryce Dallas Howard, its 2019 Woman of the Year, Thursday afternoon.

But for the first time in the group’s history, six women stood among the colorfully costumed Hasty Pudding Theatricals performers as they — and Howard — made their way down Massachusetts Avenue and into Farkas Hall.

The theater troupe made headlines at last year’s festivities when it announced that it would begin accepting women into its cast. Since 1844, the Hasty Pudding Theatricals has put on a drag show every year with only male actors. Women were allowed to hold positions on the group’s business, tech, and design boards, but until this year were never given the opportunity to perform onstage.

Asked for her thoughts on the historic nature of this year’s co-ed production at a press conference Thursday, Howard said, “It’s about time.”

“I’m really, really grateful to be here, in general, and especially this year — it’s a huge honor,” she said.

The events kicked off with a parade that wound its way through the streets around Harvard Square. Undeterred by the 14 degree cold, the lively procession featured Howard waving and smiling atop a Black Bentley, flanked by Hasty Pudding President Grace C. Ramsey ’19 and Cast Vice President David J. Lynch ’20. Pudding members dressed in eccentric attire — including a Shakespearean doublet, a cactus suit, and an inflatable dinosaur costume — danced alongside the car.

Preceding the roast in Farkas Hall, Chairman of the Hasty Pudding Institute Andrew L. Farkas ’82 made a short speech reflecting on the historic nature of the occasion.

“How fun to be here on what is the most important day, perhaps, of our 200-year history,” he said. “I want to congratulate all 200 years, all the alunni members of this organization — alive, past, and all those to come — for having done what it is that every organization should do, which is welcoming women into our cast and turning the entirety of Hasty Pudding 100 percent co-ed.”

Following Farkas’s introduction, Ramsey and Lynch led the celebratory roast of Howard. Before receiving the Pudding Pot — the award given to the organization’s Woman of the Year and Man of the Year honorees — the actress was made to face off against a dinosaur in a game of basketball, produce fake tears before the audience, and pie a student in the face.

At the conclusion of the roast, Howard joked, “For some of probably the smartest people on the planet, [Harvard students] are totally bananas.”

“I’ll never forget this for as long as I live — and please accept my children into Harvard,” she added, to laughter from the audience.