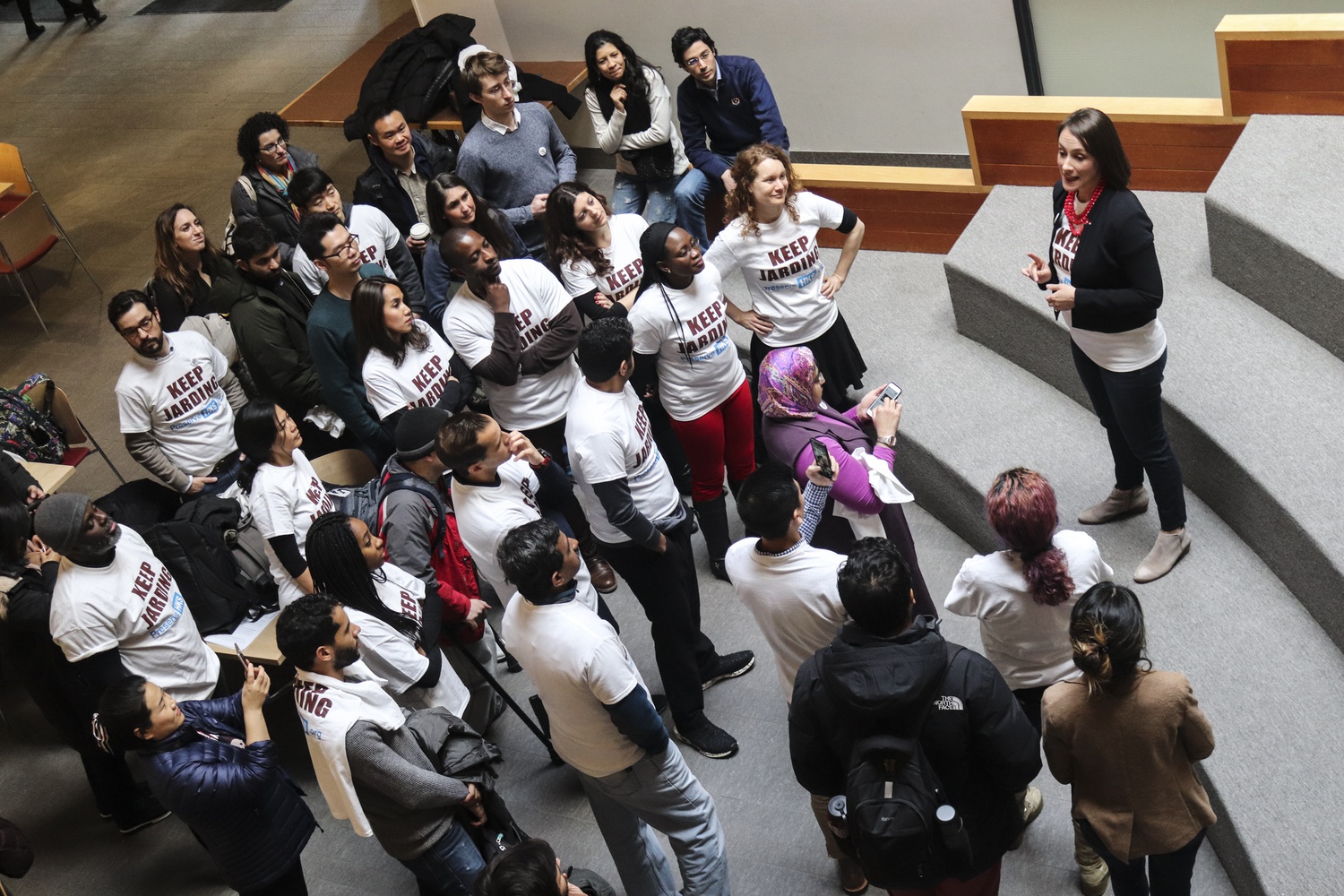 Elizabeth G. Gibbons, one of the student organizers of the rally and a student of lecturer Steve Jarding, gives a short speech calling for the University to allow Jarding to continue to teach at the Kennedy School. By Kathryn S. Kuhar
By Alexis K. Bolner and Jania J. Tumey, Crimson Staff Writers

Students at the Harvard Kennedy School gathered to protest the impending termination of Lecturer Steve Jarding — who teaches one of the school’s most popular courses — at the John F. Kennedy Jr. forum Thursday.

In December, Kennedy School Dean Douglas W. Elmendorf confirmed that Jarding could only hold his lectureship through May 2020, according to emails provided by Jarding. This sparked outcry from Kennedy School students and alumni who felt they had benefited from Jarding’s teaching. Organizing efforts since then culminated in Thursday’s rally, at which organizers handed out t-shirts emblazoned with the words “Keep Jarding” and encouraged students to sign a petition in protest.

A spokesperson for Elmendorf declined to comment Thursday, saying that Elmendorf was on vacation until this week, and did not respond to a further request for comment Friday.

Jarding is well-known for leading Democracy, Politics, and Institutions 890: “The Making of a Politician,” in which students are taught communication skills for public speaking, interviews, and debates. Students at the rally said Jarding’s course stands out among the hundreds offered at the Kennedy School.

“When I was applying to the Harvard Kennedy School, I wrote in my application that I wanted to take the class,” said Elizabeth G. Gibbons, a current student of Jarding’s who gave a speech at the rally. “There is no other class on this campus that is so personally tailored to making you a better writer, communicator, someone who can deliver a speech well — there’s nothing like it.”

Jarding — who has taught at the Kennedy School for 16 years — said he was reviewed for a promotion to senior lecturer in 2017. As part of that process, he was considered by two committees, the first of which voted him forward, and the second of which voted not to advance him to the new role. Jarding said someone “slipped the [first committee’s] report under my door.” The second committee is not known to have produced a report summarizing its findings, and therefore it is unclear why they voted that way.

Typically, if people are not voted in favor of a promotion, they are terminated from their existing lectureship, Jarding said. In his case, Elmendorf created a special designation that would allow him to remain as a lecturer for a renewed three-year period without a guarantee of promotion review at the end.

In December 2018, however, Jarding said Elmendorf asked him to depart at the conclusion of the 2019 academic year. Follow-up emails provided by Jarding indicate that he reminded Elmendorf of his allowance to stay through 2020, which Elmendorf confirmed as Jarding’s latest possible departure time and agreed to honor. Elmendorf wrote to Jarding that he would not be eligible for another review in 2020.

Jarding said that his termination was untimely, considering the high interest in his course.

“I probably get 50 to 60 students a year who come to me and say, ‘I am here because of you, I came to this school because of you,’” Jarding said. “It’s weird, at a time when there is more demand for this course than ever.”

The Kennedy School uses a bidding system for overenrolled courses. Each student is allotted 1000 bidding points per year that they may use toward classes where the enrollment is above capacity. 986 bidding points were required to enter Jarding’s class this semester, Jarding said. He indicated that this puts the course at one of the highest bid levels for any course at the school.

“I turn away a couple hundred students per semester from it, I take 56,” Jarding said of the popularity of his course.

At Thursday’s rally, Kennedy School student Kojo Frempong talked about the positive impact Jarding has had on him.

Jarding came to Harvard in spring 2004 as an IOP Fellow before accepting a lectureship that fall. In addition to teaching, Jarding does general campaign consulting and media training with politicians in the United States and around the world.

“The saddest part is that I love this place,” Jarding said. “I have nothing but praise for wanting to do what’s right by this school, and the students here are fabulous.”

—Staff writer Jania J. Tumey can be reached at jania.tumey@thecrimson.com.