‘Owning the Space That You’re In’: ‘Kim’s Convenience’ and ‘Fresh Off the Boat’ Cast Members Talk Asian Representation 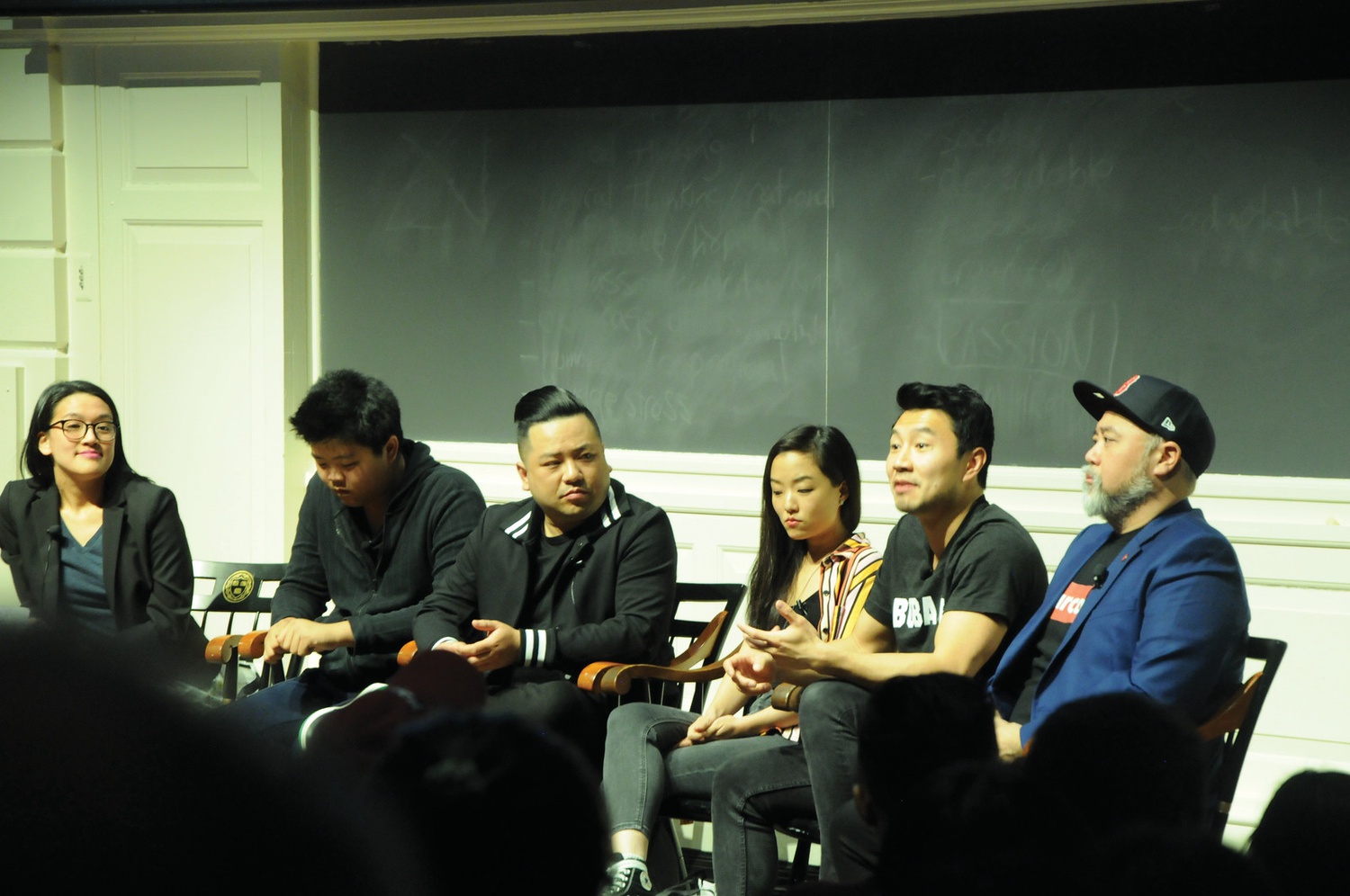 At the start of filming Season One of “Kim’s Convenience,” Paul Sun-Hyung Lee took the entire cast out to dinner and the movies.

“He sat us all down and he said, ‘If we work really hard, and we care about each other, we can have this for a long time,’” Andrew Phung, who plays Kimchee on the show, said.

Cast members from both shows — Lee and Phung, along with their “Kim’s Convenience” castmates Andrea Bang and Simu Liu and “Fresh Off the Boat”’s Hudson Yang — spoke at a panel at the Harvard Graduate School of Education on March 25. The panel, titled “Reimagine ‘Asian’: Defying Stereotypes and Celebrating Identity in Media and Popular Culture,” was organized by Woojin Kim and jointly co-sponsored by the Office of Student Affairs, the Pan-Asian Coalition for Education at HGSE, the Harvard Asia Center, and the Harvard Pan-Asian Graduate Student Alliance.

Based on the 2011 play by Ins Choi, “Kim’s Convenience” chronicles a Korean-Canadian family who runs a convenience store in Toronto.

“What Ins wanted to create was real people,” Lee, who plays Appa on the show, said in an interview with The Crimson. “He wrote the play as a love letter to his parents. And when I first read the play, it was like a love letter to my parents. We continue to strive for that.”

Following a landmark year for heightened Asian representation in film and television, the actors acknowledged that both sitcoms carry a special weight in the media landscape.

“This is definitely a lasting movement,” Yang said. “Immediately after ‘Crazy Rich Asians’ became such a huge success, people who are high up saw that this is a huge market.”

“We’re in a moment right now where, for the first time, we’re impossible to ignore,” he said. “We’ve established to Hollywood, to a show business that predominantly cares about profits, that we are profitable.”

“All these people are coming to the forefront,” he said in an interview with The Crimson. “And they’re Asian, but it’s not just Asian people who know them.”

Notably, the actors suggested that Asian-led productions are not only profitable, but also artistically meritorious in their own right.

“It also helped that these productions were excellent to begin with,” Lee said. “‘Crazy Rich Asians,’ if it was not a good movie, wouldn't have done as nearly as well.”

Lee further emphasized that the goal of the show was to achieve realism through archetypes, instead of relying on stereotyping.

“We always get the whole, ‘Do you play the stereotypes?’ And I always argue, it's not a stereotype. We're playing archetypes,” Lee said. “Because with stereotypes, it’s one common trait, and it ends there… But we’re an archetype. You’re starting from that point, and you’re building up these three dimensional real characters.”

“As an Asian male, it extends to more than the career aspect,” Liu, who plays Jung on the show, said. “‘You can’t be athletic, you can’t be desirable, sexy, and attractive.’ These are all stereotypes that are put on us from Western media. And it’s impossible for us, each Asian person growing up, not to at least internalize that to some degree.”

Both in the panel discussion and interview, the actors underscored the importance of being attentive to blind spots within the Asian community, namely mental health, internalized racism, and South Asian identities.

“I think it's very important for our community to have these dialogues about how inclusive we are and how broad that label of ‘Asian’ is, and you know, what isn't included?” Liu said, who cited “Master of None” and “Patriot Act with Hasan Minhaj” as personal favorite shows. “How can we be allies to each other, even when we might not necessarily look exactly alike.”

“I think the conversation starts among ourselves to say, ‘Listen, there are problematic things with our culture, one being the complete neglect or anything to do with mental health,’” he said. “Two, that our parents are actually extremely racist towards certain demographics and ethnicities. We need to be cognizant of that as well. And to able to talk about these things, we separate ourselves from our parents’ generation.”

In addressing Asian identity and diaspora, the panel also took on an added gravitas in light of Harvard’s ongoing lawsuit alleging race-based discrimination against Asian-American applicants, according to Kim.

“In light of the press that Harvard has been getting, considering its affirmative action trial…and the lower personality indexes of Asians that reports have been circulating, I think it’s important for Asians to come together to say, ‘Hey, we’re actually more than just what's on a piece of paper or a number,’” Kim said.

“I feel as if there's been a lot of like having to deflect negative publicity, as opposed to having positive publicity,” he added.

“It’s about owning the space that you're in,” Liu said. “That’s something that I feel like we as Asian people traditionally are not very good at. We're always taught to not cause a ruckus…We come into a room, we try to figure out who’s in charge, and we read it, and try not to make too much of a fuss.”

“What I'm saying is, sometimes, you’ve got to make a fuss,” he said.