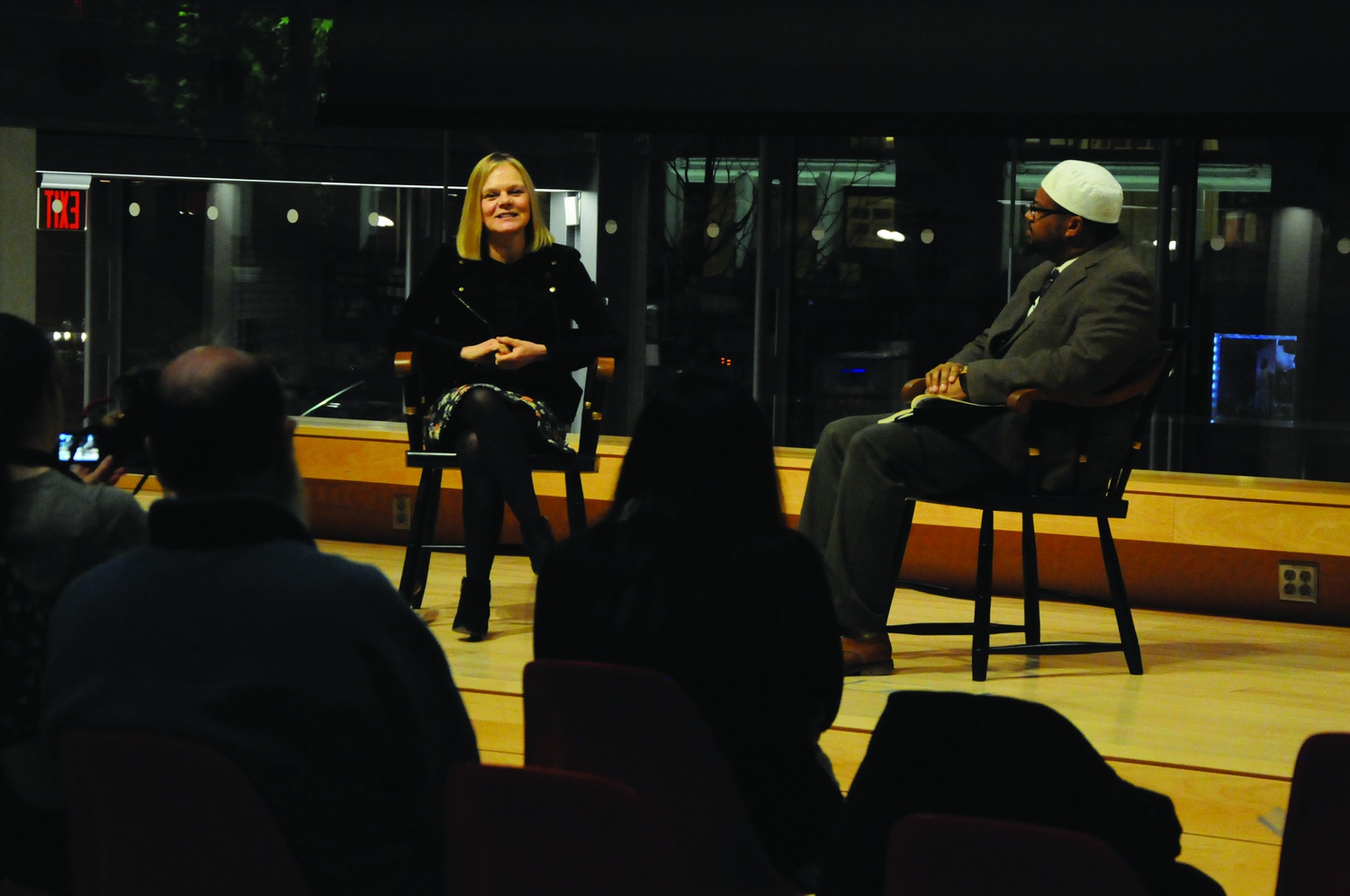 Abdur-Rashid on Wednesday night. The talk is a part of Life Matters, a series that allows students to listen to esteemed Harvard affiliates talk about their life trajectory. By Mariah Ellen D. Dimalaluan
By Ruth Zheng, Crimson Staff Writer

Dean of the Graduate School of Arts and Sciences Emma Dench discussed her current role at Harvard and her career trajectory in an interview at the Smith Campus Center Wednesday evening conducted by Khalil Abdur-Rashid, Harvard’s first full-time Muslim chaplain.

The interview marked the second installment of “Life Matters,” a discussion series hosted by Abdur-Rashid that offers students the opportunity to learn from the insights and life experiences of members of Harvard’s academic community. During the conversation, Dench answered questions about challenges she has faced throughout her academic career and at Harvard.

Dench, who assumed the deanship last year, said her biggest challenge is strategizing about raising the profile of GSAS students at the University.

“It can seem a quite college focused experience and [I’m] just really trying to focus in on the very particular experience and the needs of the graduate students,” Dench said. “That’s something I think about obsessively.”

She said her “big obsession,” however, is bolstering the faculty-student advising relationship at GSAS — a commitment she outlined an interview last year. According to a January 2018 student life survey conducted by GSAS, nearly 10 percent of graduate students have concerns about the quality of their relationship with their primary adviser.

“I’m gearing up in GSAS to launch this hopefully in the fall to look into what is good advising and how can we really up the standard of advising,” Dench said Wednesday.

Dench also described her passion for academics. Throughout her time studying classics at the University of Oxford, however, Dench said she faced both self-imposed and external pressures, which led her to decide to take a year off.

“It was the most rebellious, strangely, that I had been in my life,” Dench said. “I basically walked out of college and it was a really self-determining moment.”

Dench, who is now also a professor of History and Classics, said she was able to rediscover her love for the classics and, more broadly, learning during her year away from school.

“I gave myself permission to pick and choose among philosophies and to work out what life was really about,” Dench said.

“At Harvard, there’s this expectation that your life has to be a certain way to end up in a certain place, but clearly Dench went through a lot of hard times in school which I was really surprised by because she’s so smart,” Marsh said.

GSAS student Ahsen N. “Nimet” Cebeci, who also attended the event, said she appreciated the conversation about advising during the interview.

“I appreciate the idea that when it comes to advising students, there are people at Harvard who have our mental health — not only in mind and in their hearts — but also who are capable of empathizing with and really helping, not just through a kind of sympathetic outlook, but also through shared experience,” Cebeci said.