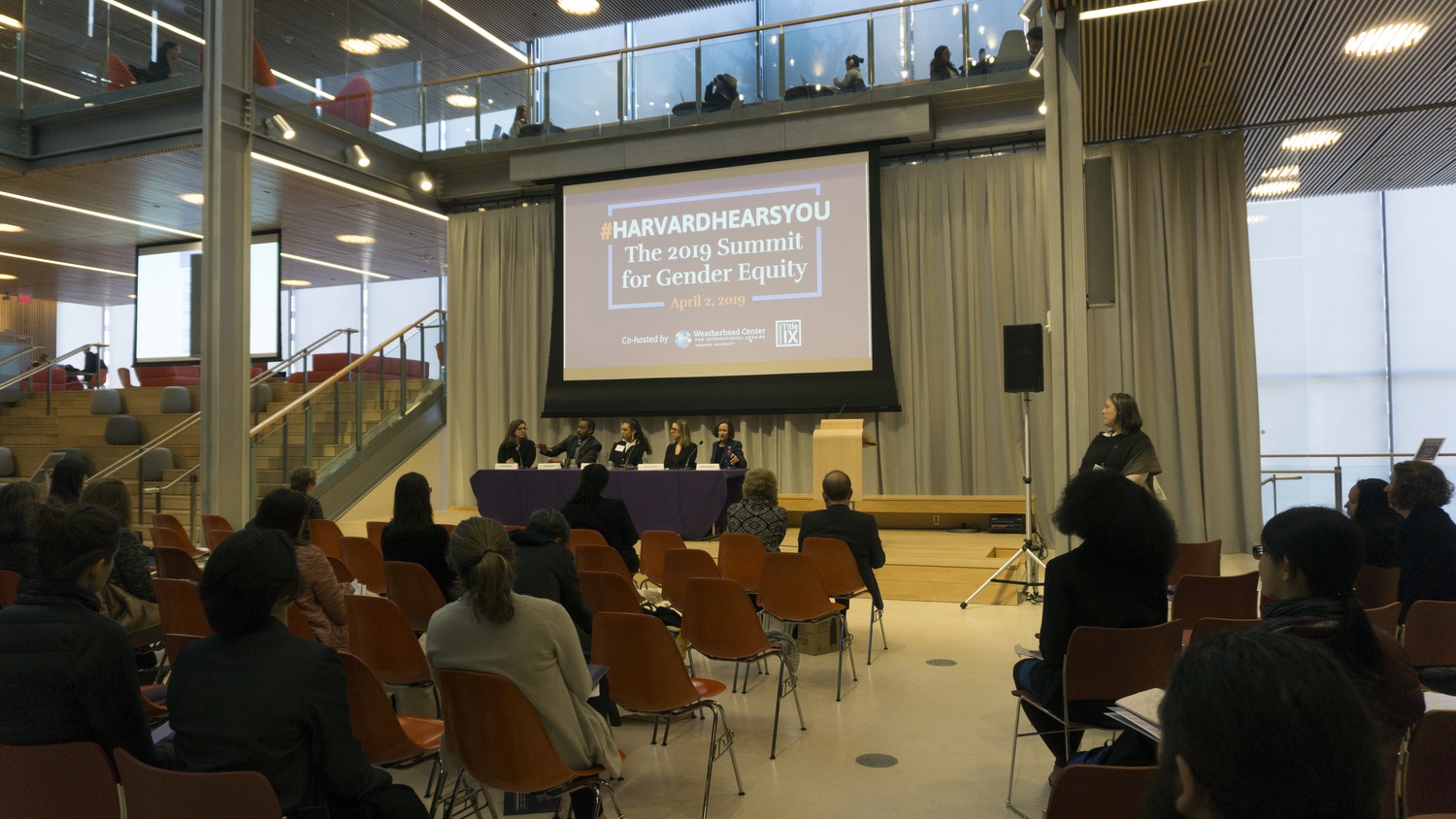 Panelists, performers, and speakers at Harvard’s inaugural gender equity summit — Harvard Hears You — crossed the stage in the Smith Campus Center on Tuesday as onlookers passed through, staying for minutes or hours at the day-long event.

Bacow’s remarks were interrupted by a protest from the Harvard Prison Divestment Campaign, whose members dropped a banner behind Bacow’s head reading “Harvard Profits from Womxn’s Imprisonment” and held up signs from the crowd.

Zoë L. Hopkins ’22, who helped plan the protest, said Bacow did not respond to the banner in his speech.

“Prisoners broadly are sort of denied a basic standard of hygiene, but this becomes particularly harsh with women, in terms of feminine and menstrual care, reproductive healthcare, et cetera,” Hopkins said, explaining the issues the group hoped to highlight.

The group has repeatedly lobbied Bacow in recent months to divest the University’s nearly $40 billion endowment from companies associated with the United States prison system. Bacow has consistently declined to acquiesce to their demands.

University spokesperson Jonathan Swain declined to comment on the protest.

Weiner spoke about her experiences advocating against sexual harassment on campus when she was a college student, as well as the work she did with larger companies to help make more inclusive culture shifts.

“We have got to focus on being leaders instead of just being liked,” Weiner said. “We have to leverage our privilege to amplify those voices that are not heard, and to know when to shut up and listen to people who need to be heard.”

Some summit events also focused on the Student Survey on Sexual Assault & Misconduct, which was released Tuesday. The survey, administered to all students across the University, comes four years after Harvard’s first offered a survey on sexual misconduct climate.

Student performers including spoken word poet Najya A. Williams ’20 and the Kuumba Singers of Harvard College also participated in the day's activities.

Kacey E. Gill ’20, president of the Association of Black Harvard Women, spoke on a panel about the voices that often go unheard during conversations about gender equity.

“People who are going to come to this conference and the summit are certain types of people,” she said. “There’s also a lot of people who are not here, and there needs to be conversations that include those people who chose not to be here for whatever reason.”

Capping off the day’s back-to-back programming was a celebrity panel later in the evening focused on dynamics of gender, power, and inclusion.

Cox, who is the first transgender woman of color to land a starring role on a mainstream scripted television series, reflected on advice she’d accumulated throughout her career. She said she has learned that the phrase “what gets in the way becomes the way” rings true.

“For so many years, I thought the trans thing was keeping me from a career. And that was part of it, let’s be real. But in retrospect, I wasn’t ready for any of this a moment before it happened,” she said.

Siriano, who won Project Runway and is known for advocating for size inclusivity and diversity in fashion, said he believes there is more to fashion than just producing beautiful clothing.

“I’d more want to be recognized as doing something great. Not like, ‘Oh, he made great clothes,’ but that I made people feel good. I think that’s more interesting,” Siriano said of what motivates his work.

Mason noted learning about one’s biases takes self-awareness, and that working to create an environment where people feel comfortable enough to reflect on and learn more about those biases is important.

“Nobody likes to think of themselves as getting these things wrong, but we all do,” she said.