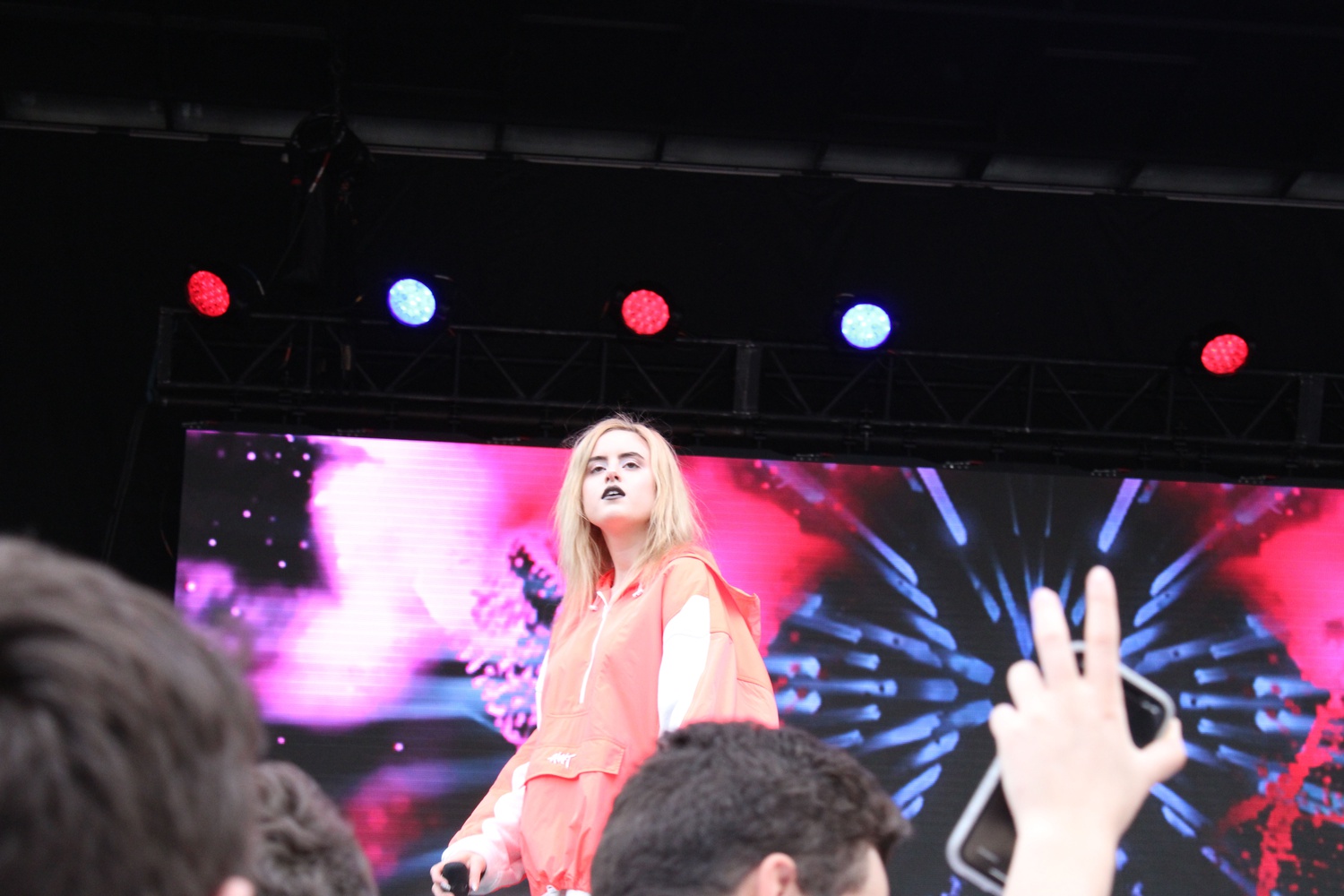 Hundreds of students packed into Tercentenary Theatre Sunday to watch Kiiara and Bazzi perform at Yardfest, the College’s annual spring outdoor concert planned by the College Events Board.

Kiiara took the stage in the late afternoon sunshine, performing a set including her songs “Messy” and “Heavy” while twirling across the stage in a neon windbreaker. While Kiiara performed, students tossed an inflatable beach ball throughout the audience, and repeatedly launched it onto the stage, shouting for Kiiara to toss it back.

A few minutes after Kiiara left the stage, the opening notes of her hit song “Gold” — which peaked at number 13 on Billboard’s Hot 100 chart in 2016 — boomed out of the speakers. She ran back onto the stage to rousing cheers to perform the song for the exuberant crowd.

After a short break, “Mine” singer Bazzi took the stage just as the sun started to set. By the time he walked off, the dark evening was illuminated by giant glow sticks handed out to audience members and flashing lights onstage.

“Are you getting lit on this side tonight?” Bazzi screamed to students on both sides of the stage.

“When I do some stupid shit in like 50 years, hoping one of you guys will bail me out of jail,” he joked, drawing laughs from the crowd.

Bazzi performed a number of his most popular songs, including “Beautiful” and chart-topping “Mine” from his 2018 album “COSMIC.” Students screamed the words to both the songs, jumping up and down and pressing toward the stage. 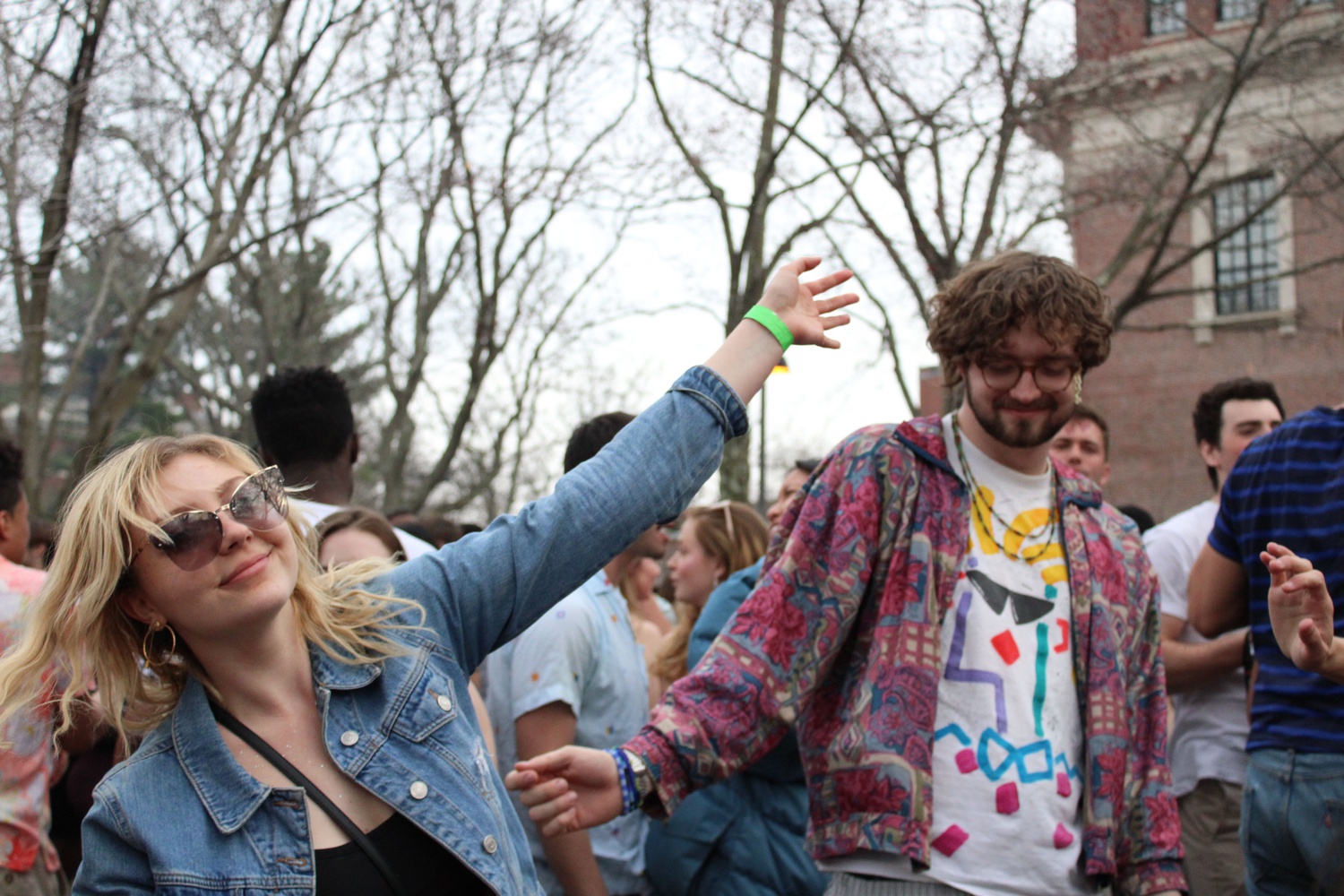 Students dance during the annual Yardfest concert. The College made a series of changes to the event, including moving it from Friday to Sunday afternoon. By Michelle H. Aye

Several students said they enjoyed the performances and that the event was much better than they had expected.

“I thought they did a really good job of getting the entire student body into their act,” Jimmy Lin ’22 said. “I think a lot of the students were really hesitant about how it was going to be, given the changes that Harvard instituted this year to Yardfest, but I think the artists did a really good job of being able to unite the student body and being able to get the energy through the entire crowd.”

Those changes included instituting a no-guest policy, preventing students from re-entering Tercentenary Theatre if they left, and holding the event on a Sunday afternoon. College administrators have previously said the changes stem from recommendations issued by a committee tasked with evaluating Harvard policies after a black Harvard undergraduate was forcibly arrested the night of last year's Yardfest. The incident drew allegations of police brutality and led some students to call on Harvard to improve its policies for the event.

“They were really great, they had a great energy,” Robert E. S. McKenzie ’22 said of Extra Extra. “Better than the actual Yardfest performers.”

“I thought the first act was really good, it was great to hear them play some really classic punk rock at the end,” Cedric H. T. Li ’21 said. “It’s a genre that’s sort of forgotten recently, and it’s great to see an act reviving those classic sounds.”

Though Li said he is not a fan of hip hop, he said he thinks many attendees enjoyed Maybe There’s Life.

“I think it’s great that there’s been a diversity of music available here on campus this Yardfest,” Li said. “I think the CEB did a really good job catering to all different choices.”

Throughout the event, students enjoyed dinner served in the Yard and ate desserts from food trucks including Zinneken's, and played life-size versions of games like jenga, checkers, and chess.

Crimson EMS, Securitas, and Harvard University Police Department were visible throughout the event, tending to students.

“It’s been awesome seeing a lot of people come together, let loose from their classes, and be able to enjoy their time together,” Lin said.
—Staff Writer Camille G. Caldera can be reached at camille.caldera@thecrimson.com. Follow her on Twitter @camille_caldera.