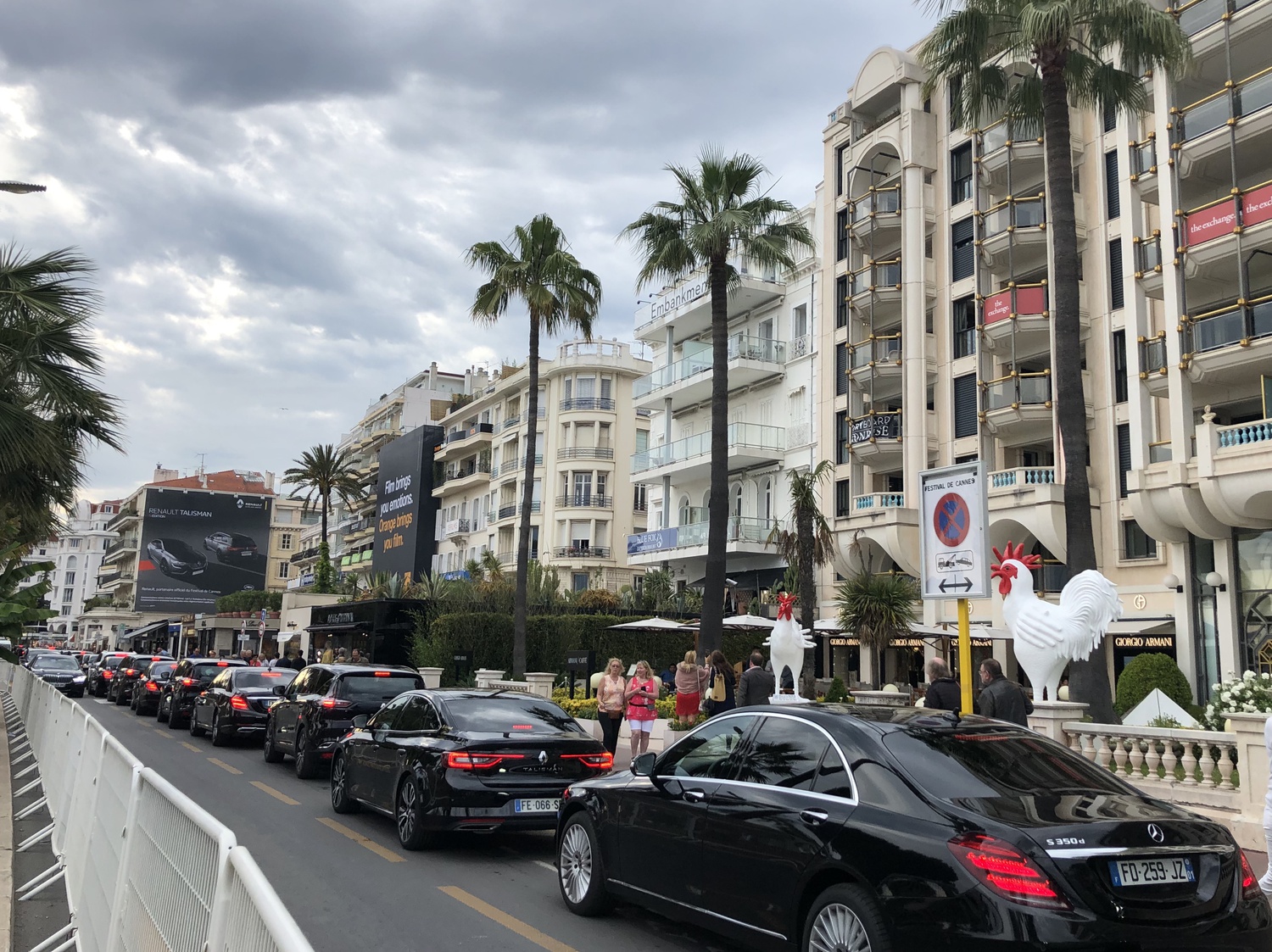 With two incomplete final papers and a shared total of seven hours of sleep from the night before, we embarked on our first journey to Cannes. While we waited for our first flight in Boston Logan, Lucy started to yawn uncontrollably, tears rolling down her cheeks. “I’m not crying,” she claimed. “It’s just a reaction. It’s fine.” Seven hours later and on a different continent, we discovered that Lucy’s luggage was probably still in Boston (or, as the customer agent said, “still tracking”). No tears this time, but it was decidedly not fine.

Our second flight took us to Nice, where things started to look up, especially compared to last year’s start to Cannes. The sun was shining (a rare sight for these two Bostonians), a cute French child alerted Kaylee when she nearly left her luggage at the airport, we made it onto the press shuttle, and our Airbnb was on a quaint (minus the pigeon attempting to eat a cigarette butt) street close to the Palais. After we carried our luggage up five flights of stairs to our Airbnb (good thing Lucy didn’t have any!), our host attempted to figure out the Wi-Fi password in a mix of French, English, and expletives. The jet lag and sleep deprivation made for a whirlwind of fatigue, but we were determined to stay up and set out to get our press passes — a task we thought would be easy, but we were very wrong.

In perhaps the most uncomfortable, chaotic, and straight up horrible 20 minutes of our lives, we were squeezed and compressed by the plebs trying to watch the opening ceremony red carpet as we attempted to walk just three blocks to the Palais. More often than not, we were moving but not walking; our bodies were being pushed forward by the sheer force of those around us. We just wanted our press passes! Stop sneering “Excusez-moi, chinois!” (“I’m Korean!” Kaylee retorted), and let us through! Once in the Palais, we explored what would be our home away from home for the next 10 days: the Wi-fi Cafe (free Pellegrino and Nespresso!), the press theaters, and, of course, the sandwich kiosk that will supply our daily lunches.

Our press passes are color-coded, hierarchical indicators of screening privileges: which lines you get in, who you can talk to. As Rachel Donatio of the New York Times wrote of her experience covering Cannes, the top of the list is the coveted white badge, which is “reserved for full-time critics who have earned their stripes over the years, or have done the journalistic equivalent of rising through the ranks of the military.” As we were stuck in the mosh pit on the Croisette earlier, we noticed “Orange” printed on everyone’s lanyards. Is everyone here a journalist, and did they add another level of press badge? Nope — Orange is actually the French telecom company that’s the “Official Partner” for the Festival. We’ve clearly done our due diligence.

Back at the Airbnb, we divided up the festival films we want to see. Kaylee quickly claimed “The Lighthouse” for “obvious reasons” (i.e. Robert Pattinson), while Lucy started calling directors with vaguely Italian-sounding names by similar sounding pastas. Safe to say we’re off to an eventful start here in Cannes — here’s to hoping for more sleep (but definitely not getting any), downing too many espresso shots, and hoping to catch a glimpse of celebrities but watching them on live TV in the press lounge instead.