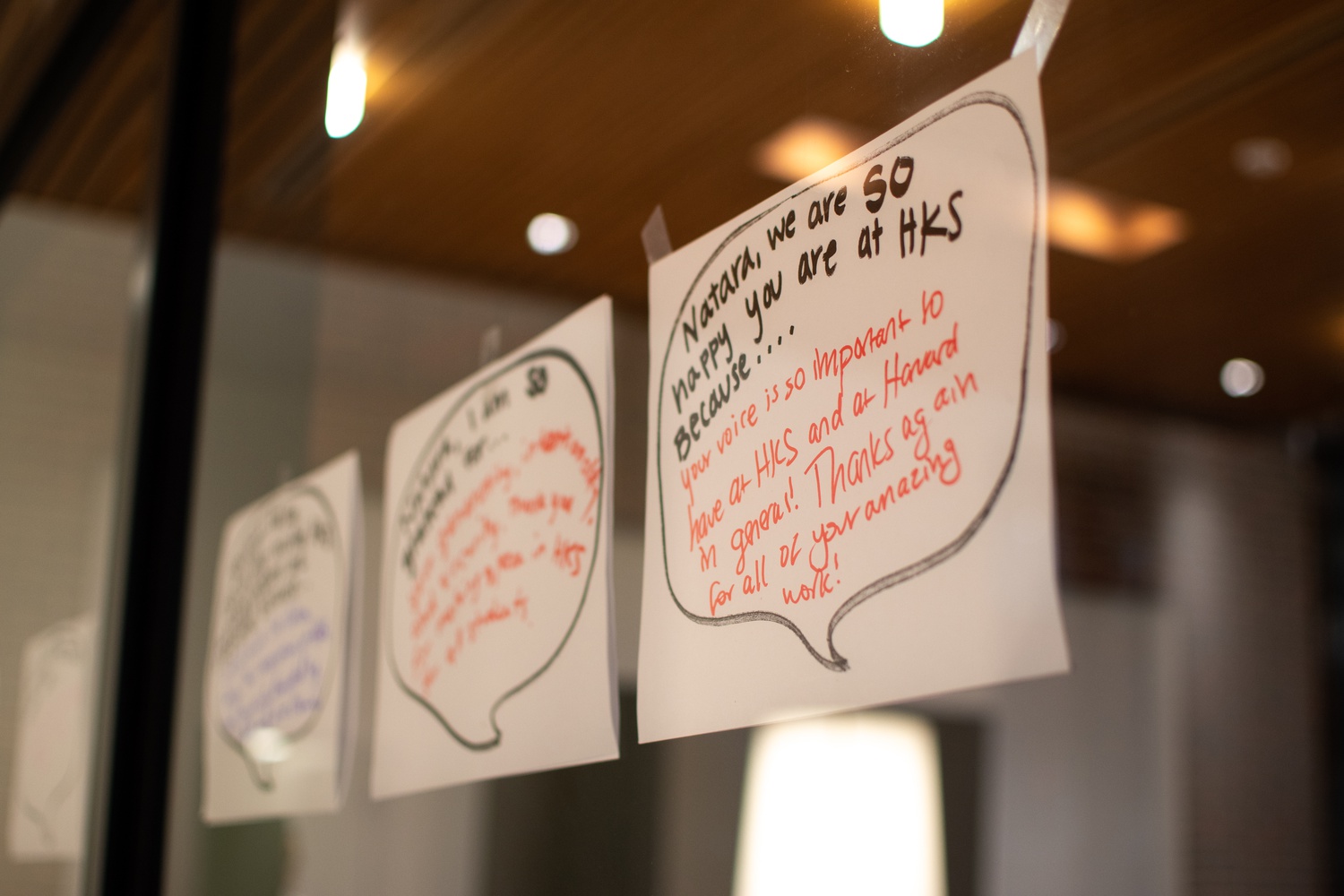 Natara Grey, an Assistant Director for Student Diversity and Inclusion at the Harvard Kennedy School, spoke about diversity and fostering a sense of inclusion in communities at the HKS Diversity Forum. By Quinn G. Perini
By Jania J. Tumey, Crimson Staff Writer

Amid ongoing student activism surrounding diversity and inclusion at the Harvard Kennedy School, Natara Gray – the school’s assistant director for Student Diversity and Inclusion — spoke at a forum Wednesday to discuss her work to bolster diversity since assuming her role in 2016.

The event — which was organized by four Kennedy School students involved in recent activism on the topic — garnered an audience of about 40 students. Before taking questions, Gray opened the discussion with remarks on her work to improve recruitment of students of underrepresented backgrounds.

“I personally think that it’s really important for a place this big who has such a large history to really be centralized when it comes to the inclusion, belonging, and diversity,” Gray said.

Gray also described her work directing the Kennedy School’s annual Public Policy and Leadership Conference — a weekend-long event to improve the school’s reach to undergraduates from historically marginalized backgrounds. Gray said she was able to secure increased funding for this year’s conference, which enabled her to admit 25 more students to the February event.

In addition to speaking about specific initiatives, Gray also answered students’ questions about her career in diversity and inclusion work, which she said is closely tied to her identity as a black woman.

In recent years, the Kennedy School has been the site of ongoing student activism to promote greater diversity and inclusivity in its students, faculty, and course offerings. Student activists launched a petition in April demanding more faculty of color and more attention to issues of race and racism in curriculum. As of last week, the petition had garnered over 300 signatures, according Sophie P. Dover, a Kennedy School students involved in organizing efforts.

Kennedy School student Camilla N. Taufic, who helped organize the event, said she is “grateful” for Gray’s work to improve diversity in an interview after the forum.

“We don’t have very many student-facing diversity positions within the administration at HKS, and it’s really an amazing resource and a wonderful thing,” Taufic said.

Kyle D. Ofori — a Kennedy School student who also helped organize the event — said that though it seems “the administration is trying on certain issues,” he has not yet seen the results of the Kennedy School’s efforts to bolster diversity.

“We imagine there is work being done behind the scenes, but if we can’t see it all, it’s hard to just trust that it’s happening,” he said.