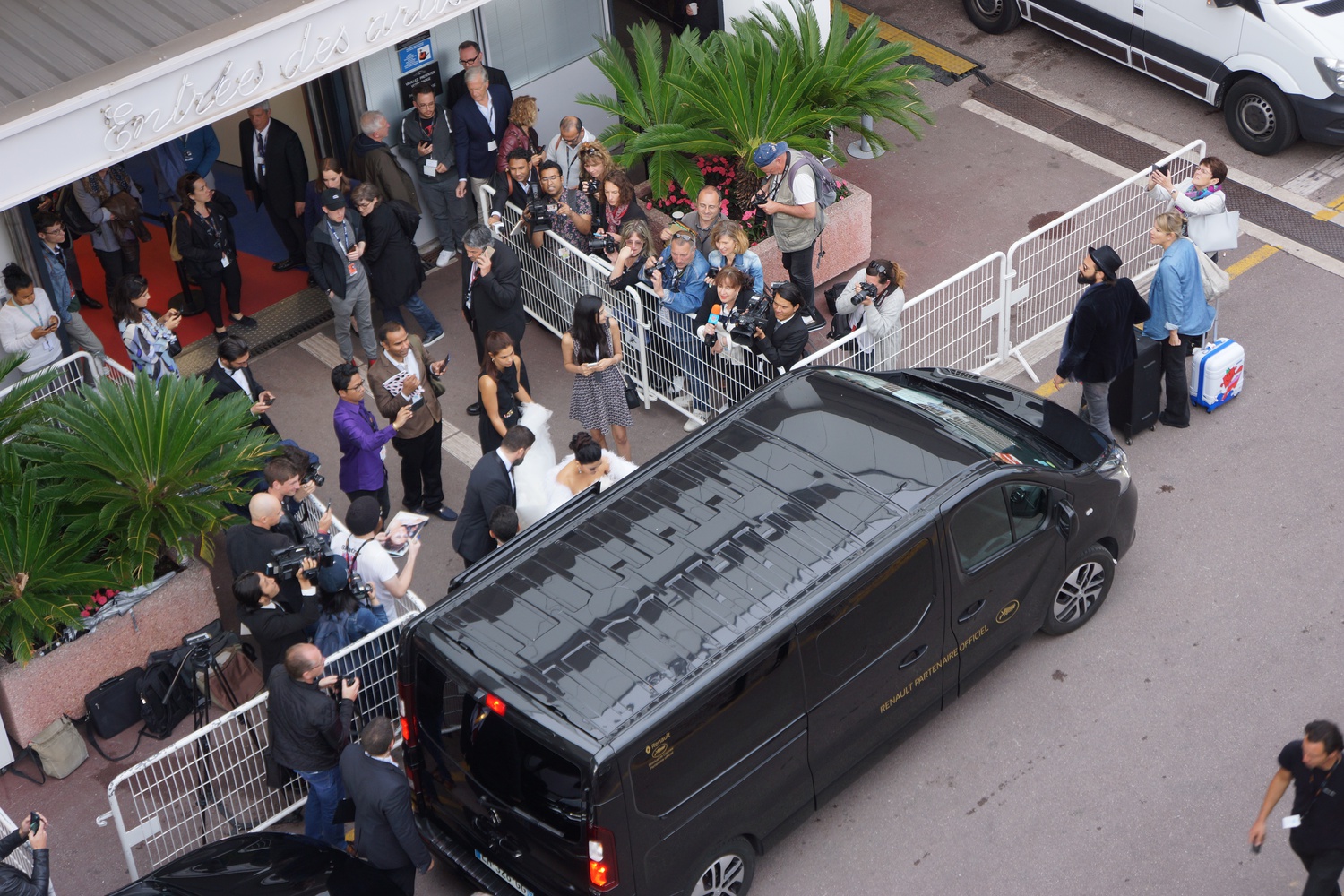 Outside the Artists' Entrance at the Palais de Festivals in Cannes. By Lucy Wang
By Kaylee S. Kim, Caroline A. Tsai, and Lucy Wang, Crimson Staff Writers

The Cannes Film Festival attracts a number of eccentric types of journalists. Here, Crimson Cannes correspondents break them down.

Editor’s Note: The Crimson granted anonymity to the following sources because they all fear retaliation from each other.

SMOKY: Middle-aged man who asks you to save his spot in line so that he can take a smoke break; otherwise, he hot-boxes the entire line in a giant cloud of cigarette smoke.

LES WRINKLÉS: Elderly woman who takes advantage of her age to cut in front of everyone. Do I know you people? GET AWAY FROM ME!

EVERYONE’S “BUDDY:” Cuts in line with: “Hey, man, what’s up? Don’t you remember me? From that one event at that one place that one time?”

Bonus points for a double cheek kiss (we’re in Europe, not Burger King, you uncivilized piece of trash)

JACQUES: French man who sits on the ground and pretends to not understand anyone who confronts him about cutting in line. Quoi le fuck? C’est quoi, un “line”? Je vais plant my ass ici.

S’IL VOUS PLAIT: Young adult in formalwear holding up a sign soliciting an invite to a premiere that not even journalists will get into all the while holding a threatening sign that says something like, “Give me an invite or I will spoil Game of Thrones.”

BONUS if they go for the passive-aggressive guilt-trip and hit you with the “I’M A FILM STUDENT :-(”

PINK BADGE: Shows up 10 minutes before the premiere because fuck you.

WHITE BADGE: Shows up 10 seconds before the premiere because double fuck you.

AMANDA: Exasperated American twentysomething who’s, like, so over this; live-tweets every time someone breathes in her direction

DINNER? Will sneakily try to hit on you via handwritten note in the press room, proposing not one, but two date options: dinner, or perhaps, “a wine?”

OLD FANBOY: He may look like your friend’s dad, but his hands WILL shake when he asks Brad Pitt for an autograph

DRINK MOOCHER: Asks for so many free cans of San Pellegrino from the press lounge that the employees stop giving him any.

TIRED BUT WIRED: Like drink moocher’s insane cousin; has been shotgunning Nespresso since day 1, and we’re not talking “lungo deca / Intensité 2”; has the hot, rancid breath of a literal swamp monster; plants die in his wake

WANNABE PHOTOGRAPHER: Sits in the last row on the balcony of the Grand Théâtre Lumière, yet still whips out their phone to try to catch a blurry ass photo of the director entering the theater

*squinting at intense zoom* “See, Marion Cotillard is… that one, in blue”

I’M TRYING: A few days into the festival, gets so overwhelmed that he reviews three movies in one article #subtweet

ODD FLEXER: Comes to Cannes but doesn’t write a single review; instead live-tweets every party they attend and every celebrity encounter

BIKER GANG: One excessively perky employee in a press-emblazoned T-shirt, handing out free copies of the daily while seated on the handlebars, pedaled around laboriously by an overworked, sweaty counterpart who periodically mutters a morose “Free Daily (subtext I hate my G.D. job)”

GROSS COUGHER: Sputters and coughs violently next to you during the film because he has some anachronistic diagnosis of a disease eradicated in the 1930s; definitely spreading those pathogens faster than free dailies #GetVaccinated

SEAT SAVER: “Yeah, no, sorry, my entire row of co-writers went to the bathroom”

EXCUSEZ-MOI: I have to pee. 67 times. Also get a snack and call my divorce lawyer. Please tuck your legs in or stand up or so help me God I will piss on you

MUNCHIES: Repeatedly forgets that food or drink isn’t allowed in Grand Théâtre Lumière; has to inhale their dinner salads before going through the security check

“Eat VERY quickly over there”

WHERE THE FUCK AM I? Will ask you if this is the press line, then ask the person behind you to make sure — then leaves?

BEEP BEEP: Has 10 watches, some loose change, and a straight-up detached circuit board in his pocket when he goes through the metal detector; security guards frisk him daily like what the fuck not again Georges

I’M ANNOYED: Stop shaking your leg. Crouch down so I can see, tall freak. And for the love of God, if you so much as sneeze or fart at an inopportune time, je téléphone à la police.

PROM QUEEN: Insists on wearing a glittery gown and heels to EVERY press screening *just in case* Leo shows up

Followed by enthusiastic cameraman for no discernible reason

THE TECH GUY: Has like, 10 different wires attached to his computer for some reason?

Can see craters on the moon with that lens, or at least Margot Robbie’s nose pores on a cellular level; definitely compensating for something

DWEEB: When asked to take a picture of someone, puts the camera on selfie mode, then flips the phone so that the screen faces away from him and struggles for a good five minutes to press the right button to take the photo

KEITH: Wearing a neon orange KANYE 2012 shirt; really proactive about line-cutters because “every person counts” which is pretty admirable, but keeps threatening to punch someone, which is decidedly less chivalric

WANNABE-DIRECTOR/ARTISTÉ: Maybe made films that never got produced. Maybe wrote screenplays that no one picked up. Maybe got cut from every audition. Regardless, the wannabe is here writing about the works that he wishes he was making instead. Has that flunking-out-of-art-school look, which is fine and all, except for the fact that he clearly can’t remember the last time he showered, because that shaggy “artsy” hair smells so bad it makes everyone in the vicinity want to vomit.

CHAD: “Ay yo Gaspar, sick movie dude! You do this a lot?” (Inevitably and always American)

IMMA LET YOU FINISH: waits 45 minutes in line to get a seat, then gets up to leave as soon as the Festival credits roll up

CAROLINE: Has “anxiety about crowds” but still gets there two hours in advance to see the faint top of Leonardo DiCaprio’s head, hasn’t eaten in a full year but “I’m not really that hungry”

KAYLEE: Wait stop is that a dog? Can we get candy after this? I’ll only wake up early if Robert Pattinson is there

LUCY: Fan in her laptop constantly on verge of busting, sleeps at 5 a.m. every night and “plans on attending an 8:30 a.m. premiere,” but still gets 7 hours of sleep, ya know what I mean?

DOGGO: Only unproblematic attendee; just here to be a good boy. Probably wearing a tiny beret or scarf. Woof.