'Not Really A Job': Faculty Deans at Harvard

By July 1, Ronald S. Sullivan, Jr. and Stephanie R. Robinson will have moved out of a stately home on Memorial Drive, with glittering chandeliers and a view of the Charles.

But they will also leave their post as the Winthrop House faculty deans and the power that comes with it — power over hundreds of students and dozens of staff.

For nearly a century, scores of Harvard faculty have occupied the post of faculty dean without much scandal. But the controversy over Sullivan and Robinson’s leadership has attracted unprecedented attention to the role. The pair’s critics argue their conduct demonstrates the extent of faculty deans’ influence and the role’s lack of oversight.

On May 11, Dean of the College Rakesh Khurana announced he would not renew Sullivan and Robinson after Sullivan sparked heated arguments following his announcement that he would represent Hollywood producer and accused sexual harasser Harvey Weinstein.

Khurana attributed his decision to let Sullivan and Robinson go to the “untenable” climate they had caused in Winthrop. Khurana said the House had experienced a “noticeable lack of faculty dean presence” and that multiple House affiliates had repeatedly brought concerns about the House’s climate to the College.

Sullivan and Robinson wrote in a May 11 emailed statement that they were “surprised and dismayed” by Khurana’s decision.

“We believed the discussions we were having with high level University representatives were progressing in a positive manner, but Harvard unilaterally ended those talks,” they wrote.

Sullivan and Robinson are one of the College’s 12 pairs of faculty deans. Each pair oversees an undergraduate House, managing between 350 and 450 undergraduates and making decisions that range from the color of house carpets to the contracts of dozens of staff.

The role is unique to Harvard. This semester, though, it has become the focus of national scrutiny because of the Winthrop scandal.

Though many outside commentators have focused solely on Sullivan’s representation of Weinstein, some College affiliates have turned their attention to his performance more broadly as faculty dean. Students have argued that administrators need to make the expectations for faculty deans more transparent to students and said the Winthrop controversy threw into sharp relief why faculty deans are an essential part of residential life.

Some parts of the job are purely administrative, according to current and former faculty deans and House staff. Faculty deans hire tutors, house administrators, and building managers. They dispense their house’s budget and coordinate its formals. They pick out furniture and approve house-wide events.

But some of their responsibilities are less concrete. Administrators, house staff, and tutors said faculty deans set the culture in their houses. They decide when to keep house traditions and when to replace them. They develop relationships with students and occasionally intervene when they face personal or academic crises.

Though some of the finer details of the position are up to interpretation, all of Harvard’s faculty deans wield enormous power.

Candidates for a faculty deanship either have the right personality or they don’t.

“I think it's odd when a faculty dean says, ‘Tell me about this job.’ It's not really a job. It suits certain personalities and doesn't suit others,” said former Dean of Freshmen Thomas A. Dingman ’67, who has surveyed students as part of previous faculty dean searches.

Personality aside, few specific criteria exist for those seeking a job as faculty dean. Candidates tend to be married couples or those in long-term relationships. At least one half of the couple must be a tenured professor or hold some other senior academic position.

While most of the deans who hold professorships are members of the Faculty of Arts and Sciences, some teach at Harvard’s professional schools. Sullivan and Robinson work at Harvard Law School, while Adams House Faculty Dean Judith “Judy” S. Palfrey ’67 is a professor of pediatrics at Harvard Medical School.

When a faculty deanship opens up, Khurana compiles an initial list of candidates — some self-nominated, others suggested by FAS affiliates — and convenes a committee in the house with the vacancy to determine students’ priorities for the search.

Following these meetings, Khurana then narrows the pool of candidates to two or three pairs. He said student input helps ensure that candidates’ priorities align with the priorities of the house and the College. 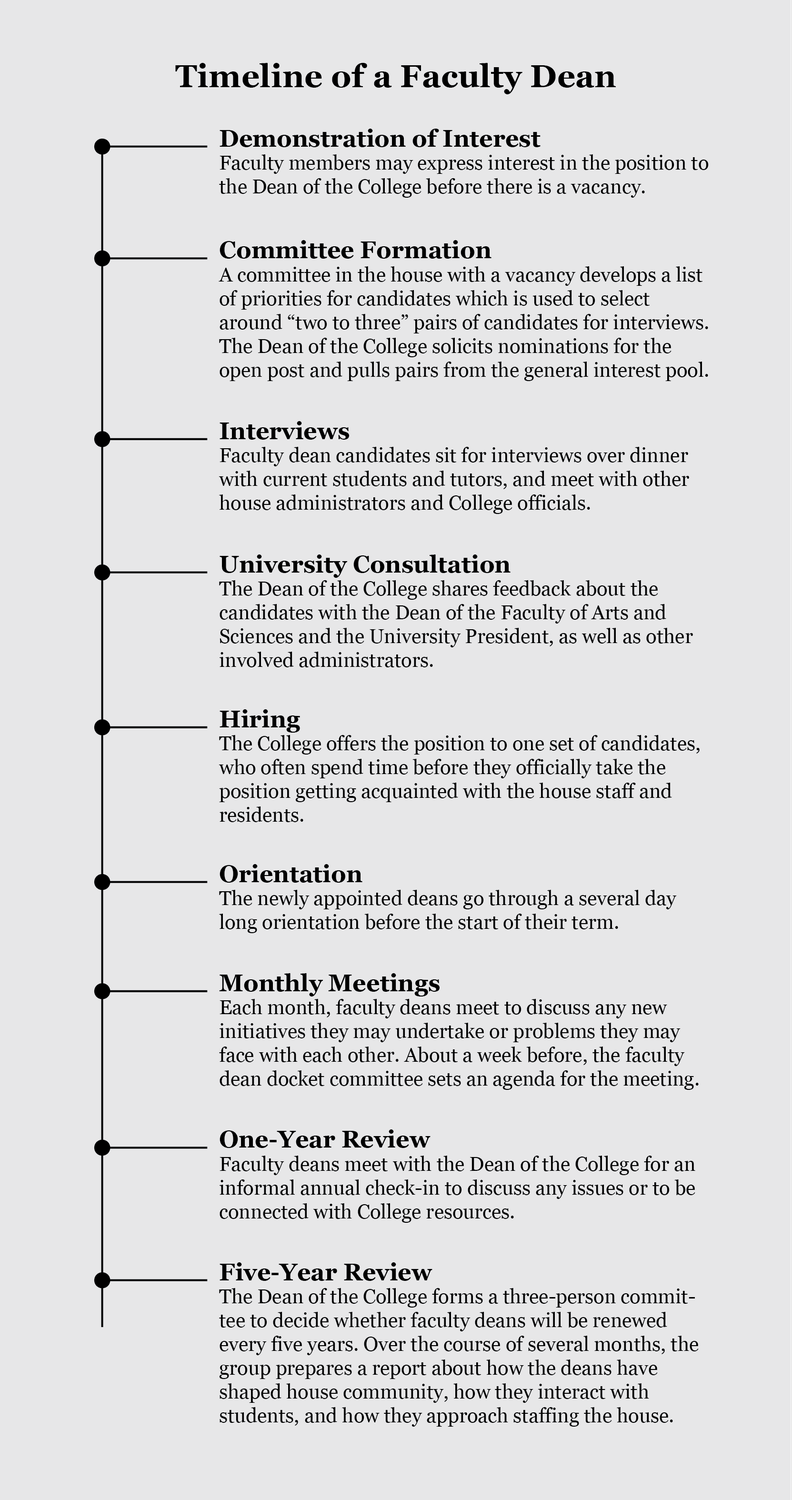 The next stage of the search consists of in-house interviews. Students and tutors meet with prospective faculty deans over meals and send feedback on each one to the dean of the College.

“We spent like 20 to 25 hours visiting all the houses, meeting students, finding out how the culture is,” Rosengarten said. “It was great.”

The emphasis on whether a candidate has the “right” personality continues as they undergo interviews. Residents evaluate how well the candidates fit the house’s character.

“It's a vocational choice, as much as anything. It's something that you feel you'd be good at,” Lowell House Faculty Dean Diana L. Eck said. “It's just a fit of personality. And where it gets in trouble is people who think of it as a plum that they somehow managed to pluck.”

Using feedback from the interviews, Khurana makes his final decision in consultation with the dean of students, the dean of the Faculty of Arts and Sciences, and the University president.