Portrait of An Artist: Rayna Yun Chou, Creator of Concert for One 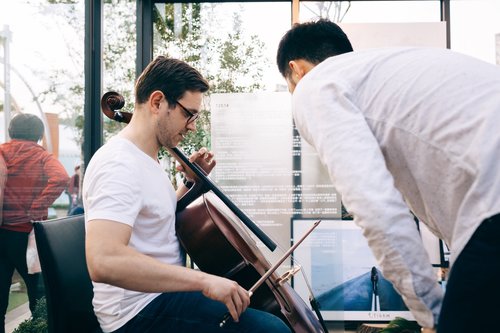 Concert for One, a one-on-one musical experience created by Rayna Yun Chou, debuted in Taiwan in 2016. By Courtesy of Rayna Yun Chou
By Ifeoluwani E. Omidiran, Contributing Writer

Rayna Yun Chou, a classically trained violist, is partnering with Celebrity Series of Boston to produce Concert for One, a series of minute-long concerts that bring together one musician and one listener for an intimate performance. The public program will take place Sept. 20 to 29 in the Harvard Science Center Plaza and Chin Park on the Rose Kennedy Greenway in Boston. Chou first staged Concert for One in Taichung City, Taiwan, in an effort to bridge the divide between classical musicians and everyday listeners, and the project attracted thousands of listeners.

The Harvard Crimson sat down with Chou to talk about the program, her own music practice, and the future of classical music.

The Harvard Crimson: What inspired you to do Concert for One?

Rayna Yun Chou: It came from a quote, actually. Three years ago, I was at the New England Conservatory, and my viola professor Martha Katz shared a quote with us that became the inspiration for and the beginning of everything. The quote was, “Courage is what it takes to stand up and speak. Courage is also what it takes to sit down and listen.” I realized that we never see a music performance that way. When we go to a concert, whether to perform or to listen, we think about ourselves: how nervous we are as musicians, or what our expectations are as listeners. I went home that night, and an idea just came to me. What if we put a nervous musician and a nervous listener together in a room? What happens then?

THC: Are there any lessons that you’ve learned from the first iteration in Taiwan that you’re taking with you to Boston and Cambridge?

RYC: I had a lot of assumptions about what would happen, but none of my assumptions were right.

First of all, I thought no one would come. I remember on the very first day before the opening, we were setting things up and a violinist was just tuning inside the room. People walked by and they went, “Oh, whoa, what’s going on?” We explained that in fifteen minutes we were going to start this project. They were like, “Oh, that sounds so interesting, we can stay here and wait.” People just started lining up, and the line didn’t stop for the next three days. Every minute, someone was waiting outside. It blew our minds.

My second wrong assumption was that I thought people would look away because it was so close. I thought that the musicians wouldn’t feel comfortable, either. With the door closed and just two people face to face, the listeners either looked at our face or at our hands. I realized that they wanted that connection — they wanted it to be special as well. We did interviews with them afterwards, and we asked, “How did you feel? Was it too close?” Everyone said, “No, it was perfect.” They kind of proved that the traditional concert hall setting might not be working.

THC: Can you talk more about where the line between social experiment and performance exists in Concert for One, and where it’s blurred?

RYC: It’s a social experiment because despite our Taiwan experience, the Celebrity Series and I have no idea how this project will work out in Boston. We have no idea how the people here will react, we don’t know what might happen. With each listener and each musician and each minute, it will be completely different.

THC: How have you seen your own music practice influence the direction of Concert For One?

RYC: The idea came from a sense of need. I’d seen a lot of discussions on the future of classical music and how we can really be in touch with the flow of the world and be successful in terms of competing with other genres. As a classical musician, I feel like this is the direction we need to go. We need to be more personal for the sake of the musicians and the listeners. From the reactions I’ve gotten from the musicians and listeners, I believe that this is the beginning of a change in the world of classical music: how we are presenting ourselves and how we are being perceived. Everyone says that the world is getting smaller, but people are getting further away from each other, and I believe that classical music can be the change. It’s not that we need to overturn everything from our training, but I feel like we need to be able to try to experiment, to embrace new opportunities, to create more connections. I’ve always known that there are people that support and adore classical music, and there are others that prefer other genres, but there is also a big group of people who haven’t had the opportunity to connect with these musicians, and they haven't decided yet. That is the group that we have to reach out to.