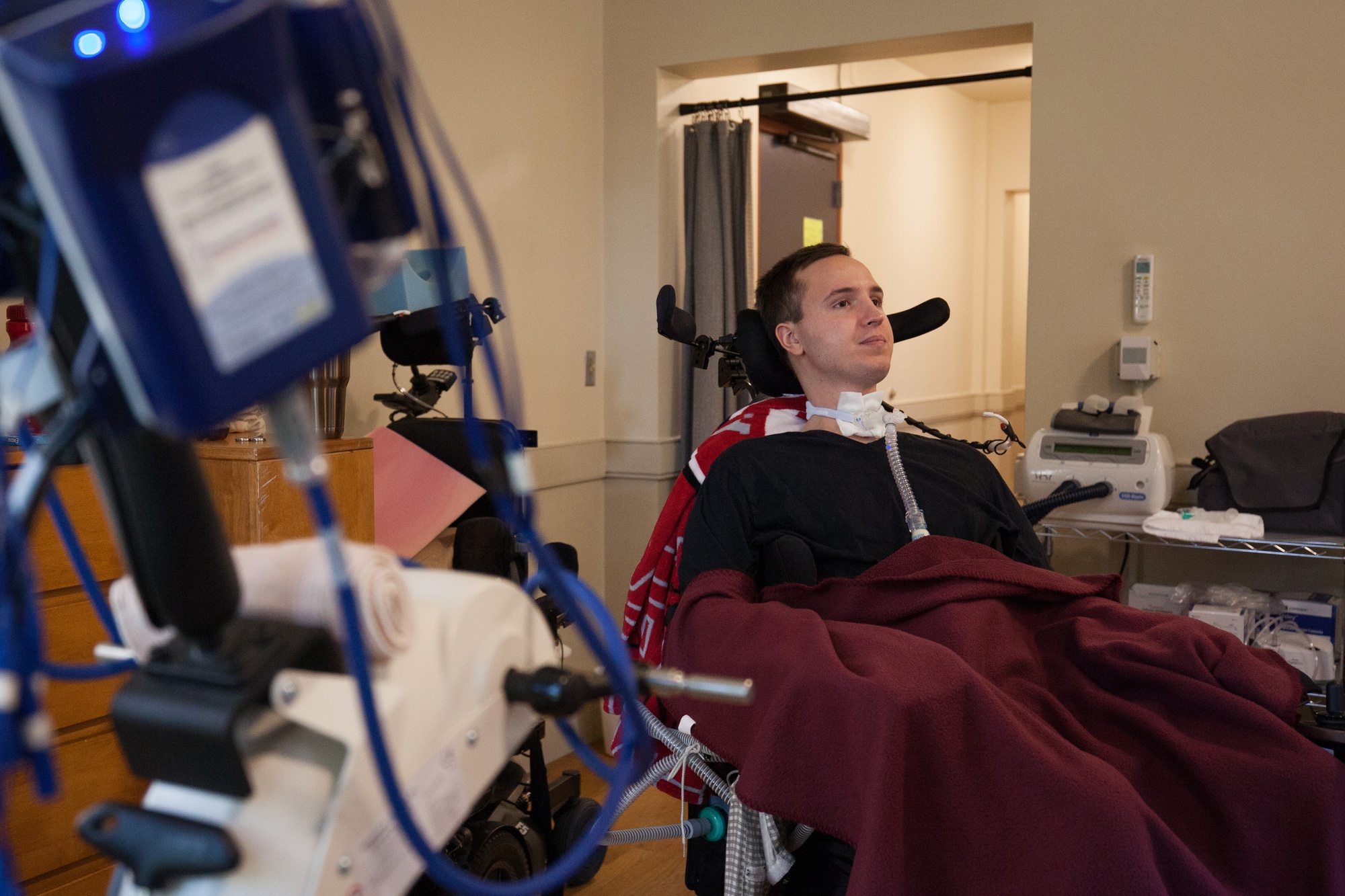 Ben Abercrombie arrives back at campus as a part of the class of 2023 and is greeted with open arms by his peers.
By Devin B. Srivastava, Crimson Staff Writer 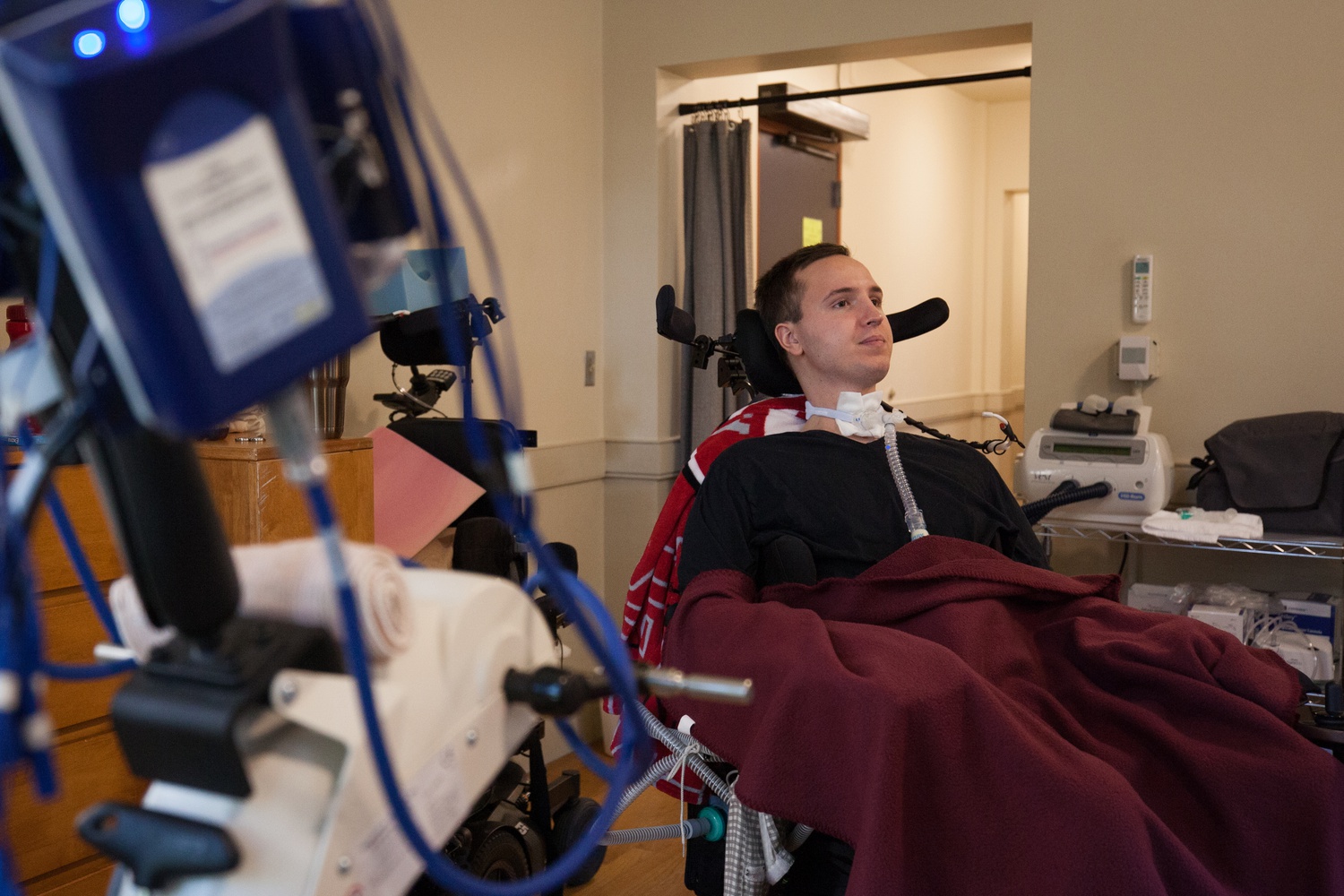 Ben Abercrombie arrives back at campus as a part of the class of 2023 and is greeted with open arms by his peers. By Kai R. McNamee

Abercrombie, an Alabama native recruited by Harvard from high school football powerhouse Hoover High School, originally entered the College as a member of the Class of 2021. He suffered a broken neck and spinal cord injury in the first game of his Harvard career in fall 2017. The past two years, Abercrombie has undergone multiple surgeries and intensive physical rehabilitation to enable his return this fall as a member of the Class of 2023.

“The goal was always to come back. It was just a matter of when I was healthy enough,” Abercrombie said.

After Abercrombie’s injury, he spent four months recovering in a spinal cord specialty center in Atlanta, Ga., before returning to his home in Hoover. There, he worked out almost daily at the University of Alabama’s Spain Rehabilitation Center to keep his muscles from atrophying while he waits for research scientists to find a way to re-allow his spinal cord functionality.

In preparation for his return, Abercrombie worked with Harvard’s Accessible Education Office, which has provided him with classroom accommodations and a modified dorm room. His family has also shifted medical care to Cambridge.

Nekesa C. Straker, the Senior Assistant Dean of Residential Life and First-Year Students, wrote in an email that the College is “delighted” to welcome Abercrombie back to campus.

“Ben's perseverance and determination to continue his studies in the face of enormous adversity is truly an inspiration, and we are happy to be supportive in any way that we can,” Straker wrote.

Abercrombie is living with his mother — who he fondly described as his roommate — in a modified suite in Weld Hall, complete with a 65 inch flatscreen television gifted to Abercrombie by the Harvard football team’s administrative coordinators.

Abercrombie, who received an “A” in an online Harvard class over the summer, will take two classes this term as he readjusts to life on campus. He has previously stated that completing his Harvard degree has been a goal since the initial injury.

“I'm just excited to get everything going again. It's been a while, and I've been waiting forever to start school again here. I'm just ready to go.” 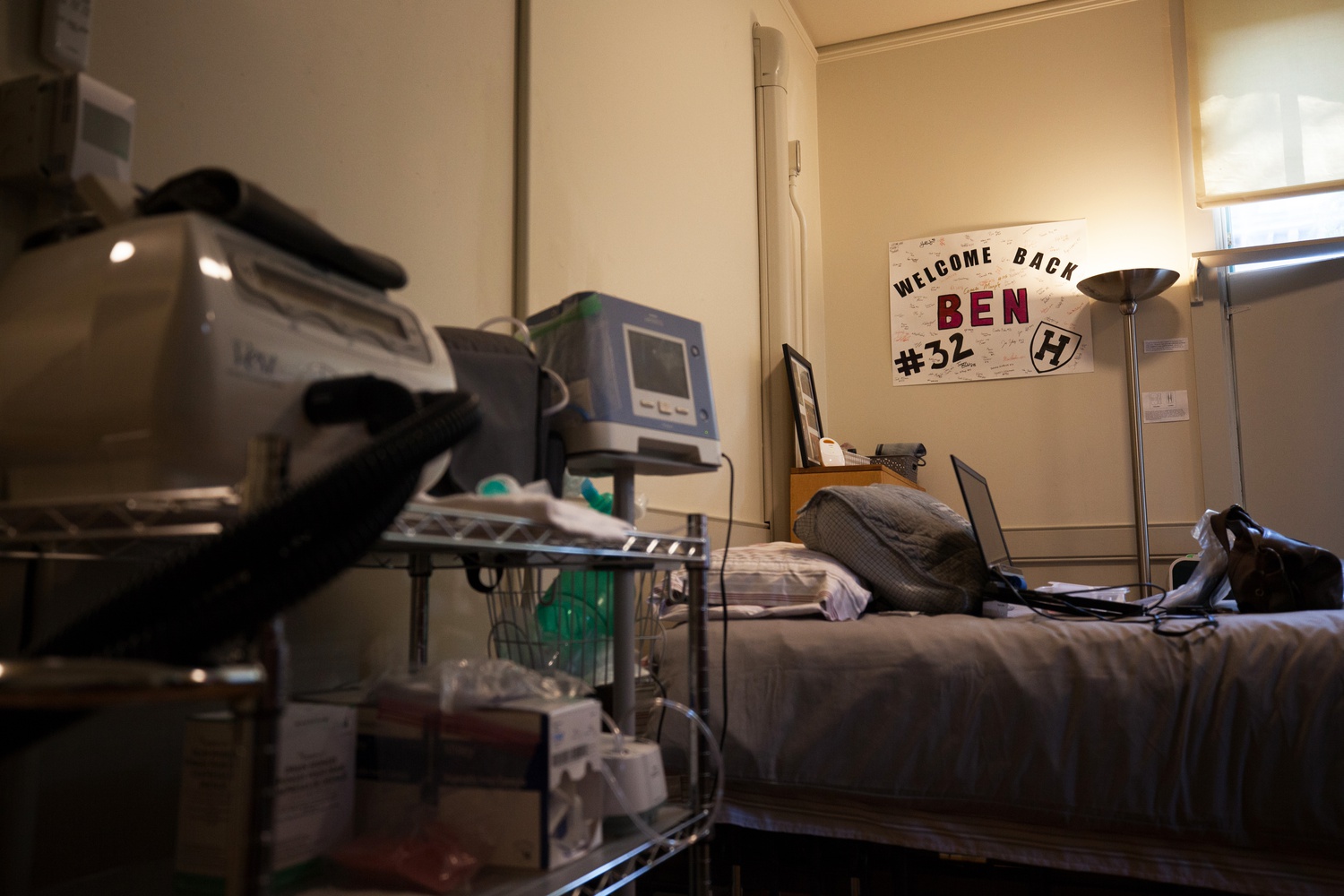 Abercrombie’s return has been marked by constant surgeries and doctor’s visits. Just seven months ago, he underwent a surgery to complete a phrenic nerve graft, which he hopes will eventually help him regain his ability to breathe without the help of a ventilator.

He will continue physical rehabilitation in Cambridge. Currently, Abercrombie works out on a specialized bike three times a week in his dorm room to keep his muscles from atrophying, and he will receive treatments at Journey Forward, a Massachusetts-based non-profit that works to improve the lives of those with spinal cord injuries.

While most freshmen spent Orientation Week learning their way around campus and preparing for upcoming classes, Abercrombie also had to plan for his medical care.

“We have to train the new nurses, go to doctor's visits. We're still really busy in trying to establish a schedule,” Abercrombie said. “The main thing you worry about is having enough time to do everything that you need to do on a daily basis while getting your school work done and being successful in school.”

Abercrombie will take two classes this term instead of the normal course load of four classes, as he readjusts to college life. Over the summer, he learned to use technology to read, write, and even solve math equations in preparation for academic coursework.

In addition to his academic focus, Abercrombie remains committed to a full recovery.

“Right now, obviously the main goal is to be healthy and heal up,” he said.

Abercrombie stays up to date with the most current research into spinal cord injuries and is in contact with a pharmaceutical company called NerveGen, which researches treatments for nerve damage.

“They have a really intriguing study and they plan to go into clinical trials in 2020. They have this enzyme that they inject in the spinal cord that will deplete scar tissue around the injury that will allow your body to heal itself,” Abercrombie said.

Inspiring from the Sidelines

Despite his injury, Abercrombie plans to continue to be a part of the Harvard football family.

“I just like to be around, be a part of the guys,” he said. “I'll maybe help with analyzing film or something. I'll just be there, be around with the guys and everything. Help out with whatever they need.”

The football team and coaching staff welcomed Abercrombie back to campus last month by hosting a college football watch party. Several players have dropped by his room in Weld to say hello, and Head Football Coach Tim Murphy checked in with Abercrombie and his family when they arrived on campus.

“As usual Ben was incredibly upbeat, chatty and gregarious, a profile in courage. And that is the reason he is such an inspiration to our team and program,” Murphy wrote in an email.

“It's just really inspiring — staying so positive, for him to stay so positive and having him joke with us. It meant a lot to the team,” he said.

Wingfield, who will return to the field this fall after tearing his ACL last year, said he wears a “Stand Up for Ben” armband every day in honor of Abercrombie.

“Having him on the sidelines with us, in the locker room with us, is just an extra bonus,” Wingfield said. “Knowing how much of a beast that he was out on that field, knowing that he wants to be out there, and us doing it for him and having him inspire us — it's going to do even more as far as bring this team together and make us play harder.”

In between attending class and Harvard football games, Abercrombie plans to continue to work out daily to keep his body in shape for his ultimate goal — to walk again.

“I'm just keeping my body ready to go for when I'm ready to be healed.”