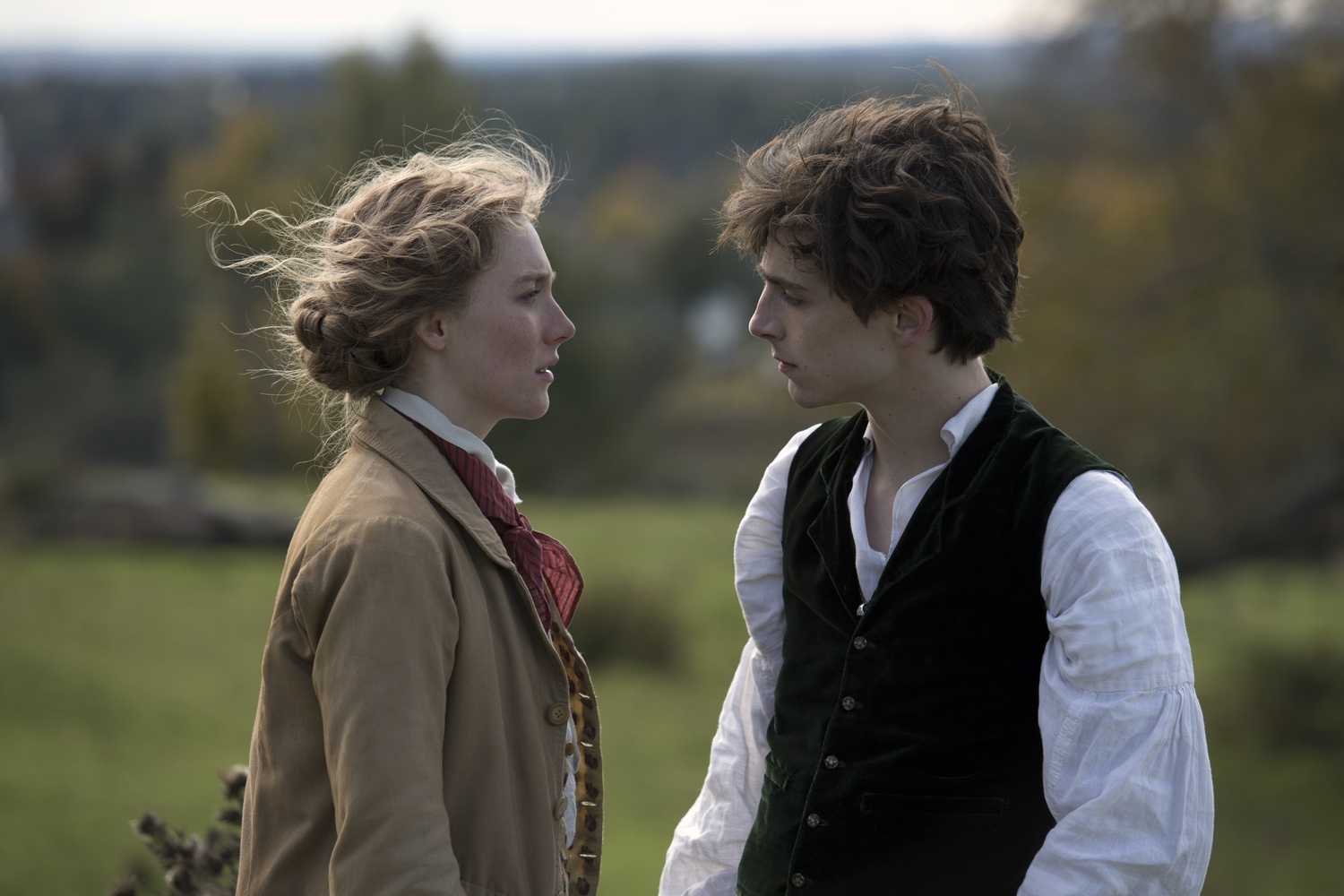 In 1868, “Little Women” was a radical book. Spotlighting the independent, subversive imagination of ordinary teenage girls, it challenged both the absence of women’s voices in literature and what literature itself could look like.

More than 150 years later, Lousia May Alcott’s classic novel is no longer alone in a tiny canon of serious books about women. Has the book, then, become just a reminder of outdated forms of oppression, a nostalgic memory of scarlet fever, and sexist marriage laws? Or is it something more timeless, something beyond its giant dresses and mind-boggling labor laws — a book that can still speak to the challenges of womanhood today? In her glossy and ambitious 2019 update, Greta Gerwig seems determined to prove the latter. But while visually ravishing and brimming with standout performances, Gerwig fatally misses the revolutionary core of the story. A mix of preachy tirades against marriage and cheesy rom-com happy endings, the film trades Alcott’s original radicalism for an Austenian marriage-drama without any of the subtlety or cynicism.

To start off, you cannot understand the disappointment of “Little Women” without understanding its many strengths. From a visual standpoint, the film is a masterpiece. Gerwig spares no expense in bringing each setting — from the March family’s cozy, perfectly decorated home to the worn lace drapes in Aunt March’s empty mansion — to lavish life. Its rosy, afternoon-glow lighting draws viewers into the life of the March family as though they are an intimate part of it. And for a story that’s been adapted into 12 different TV series, Gerwig’s ability to fit the highlights into a satisfying, if rushed, 2 hours and 15 minutes is impressive.

Under Gerwig’s deft hand, many of Alcott’s rich, fascinating characters are brought to life like never before. As Meg March, the oldest of the four titular sisters, Emma Watson appears fully at home in a role in a way she has in few previous performances. Perhaps this is because Watson’s previous roles have been held back by a kind of perfectionism, a heroism and flawlessness that can make her noble Disney princess or Biblical hero feel a little flat. Watson’s understandable tendency to turn the women she plays into faultless role models is finally tempered here — Meg simply cannot satisfy everyone no matter how hard she tries. Watching Watson’s Meg grapple with impossible personal and financial choices not only puts Watson at her best, but allows her to embody and satirize the straightjacket of her own public persona. Herself a victim of a culture that demanded perfect boyfriends and perfect feminism in equal turn, Watson makes the prim and proper Meg more sympathetic and relatable than ever before.

Like Watson, fellow social media darling Timothée Chalamet both fills out and contemporizes a character that can easily be read as one-dimensional. As the March sisters’ brooding, rich neighbor Laurie, Chalamet’s utter physical creativity delights and surprises at every turn. Whether drunk and twirling at a party or serious and bored in Latin class, he manages to be comic and heartbroken, stupid and serious all at the same time. As he grows up and out of conventional masculinity, Chalamet’s Laurie develops a vulnerability and maturity throughout the movie from the women around him that is more rich and thoughtful than any previous incarnation of the character. He doesn’t just model a humbler, more sensitive version of masculinity — he markets the hell out of it.

Unfortunately, Saiorse Ronan, the movie’s third millennial celebrity, leaves far more to be desired. As unbridled, hot-headed Jo, Ronan constantly feels like she’s half-heartedly dressing up as an unconvincing caricature of a tomboy. While Jo’s words in the book on her “disappointment at being a girl” and how she “loves her liberty” come out of Ronan’s mouth, her acting and mannerisms not only fail to embody those words but undermine them. It seems as though the sheer number of times the script finds it necessary to call Ronan’s Jo an “unladylike girl” is compensation for the fact that Ronan barely stands out from her sisters.

The dissonance between Ronan’s performative so-called radicalism and generally unimpressive performance is not the only problem with her Jo, however. Beyond this dichotomy in personality, Ronan constantly tells the audience how much she hates marriage and romance without ever showing it. On the one hand, Gerwig scatters the film — which ricochets between childhood and adulthood in rushed, arbitrary fashion — with scenes that attempt to paint Jo as Alcott’s mirror image. Not only does Gerwig add scenes to the story where Jo writes her own “Little Women” about herself and her sisters, but the struggles Jo faces in negotiating its publication are clearly based off of Alcott’s biography. These original additions skew her character toward Alcott’s likeness, who was famously “committed to never marrying.” She ultimately married her beloved Jo off “out of perversity” — not because she (or Jo, for that matter) really wanted to get married, but because her publisher forced her to do so.

But Jo, in Gerwig’s adaptation, is far from anti-marriage. Gerwig subverts this aversion to marriage by altering the story’s most infamous, radical moment: when Jo rejects Laurie. To many, Jo’s decision is the revolutionary core of “Little Women” — an earth-shattering, genre-defying declaration that a girl could want something more than to marry her rich best friend. But Gerwig’s adaptation utterly dilutes the radicalism of that moment. It flounders, first, in the childish, giggly and flirtatious relationship she has with Professor Bhaer (Louis Garrel), whom Gerwig changes to a less mean, less ugly “heartthrob” and Jo’s fairytale happy-ending.

But the adaptation’s hypocrisy is not just that Jo marrying the 30-year-old hot teacher version of Timothée Chalamet is pawned off as independent and radical. Rather, the biggest hypocrisy is that Ronan’s Jo doesn’t even really reject Laurie in the first place. No longer does she boldly declare she “did not love her boy, and never could.” Rather, she offers Laurie a list of worries that ultimately melt when she changes her mind and sends him a letter begging for another chance. Perhaps, the idea of softening its unbreakable heroine in an ostensible moment of weakness could be viewed as making Jo more relatable or more emblematic of a version of feminism that is not “anti-men.” But this interpretation misses the motivations of Jo’s character in the first place. Jo’s decision was never about being anti-men, but about subverting the male-dependent nature of the entire genre of inevitably romantic stories about women. By finding her fulfillment not in the perfect relationship, but in her writing and her career, Jo as a character championed a new vision of happiness that was just as fulfilling as Austen’s or Brontë’s.

This is not to say that wanting to get married — as Meg’s character has always so beautifully dramatized — is unfeminist. The problem is that marriage in their world was nonnegotiable. A woman could marry happily or unhappily, in life and in literature, but she could not be happy alone. Jo’s entire character arc poses the question: What if a woman who needed the money met a nice, wealthy boy she got along with, but only loved him “like a brother?”

It’s difficult to watch Ronan’s heartsick pining over romantic montages of Laurie in the final scenes of the movie and believe this is the same Jo who told Laurie she was “happy as I am, and love my liberty too well” to marry him. Rather, Gerwig’s Jo feels like a contradiction, a woman who rather than celebrating her fiery independence, ends up ultimately regretting it.

Without question, Greta Gerwig’s “Little Women” is gorgeous and impressive in many ways. But with Ronan’s meandering, unsatisfying Jo at the helm, this beautiful, saccharine update’s wavering heart holds it back from its real potential.