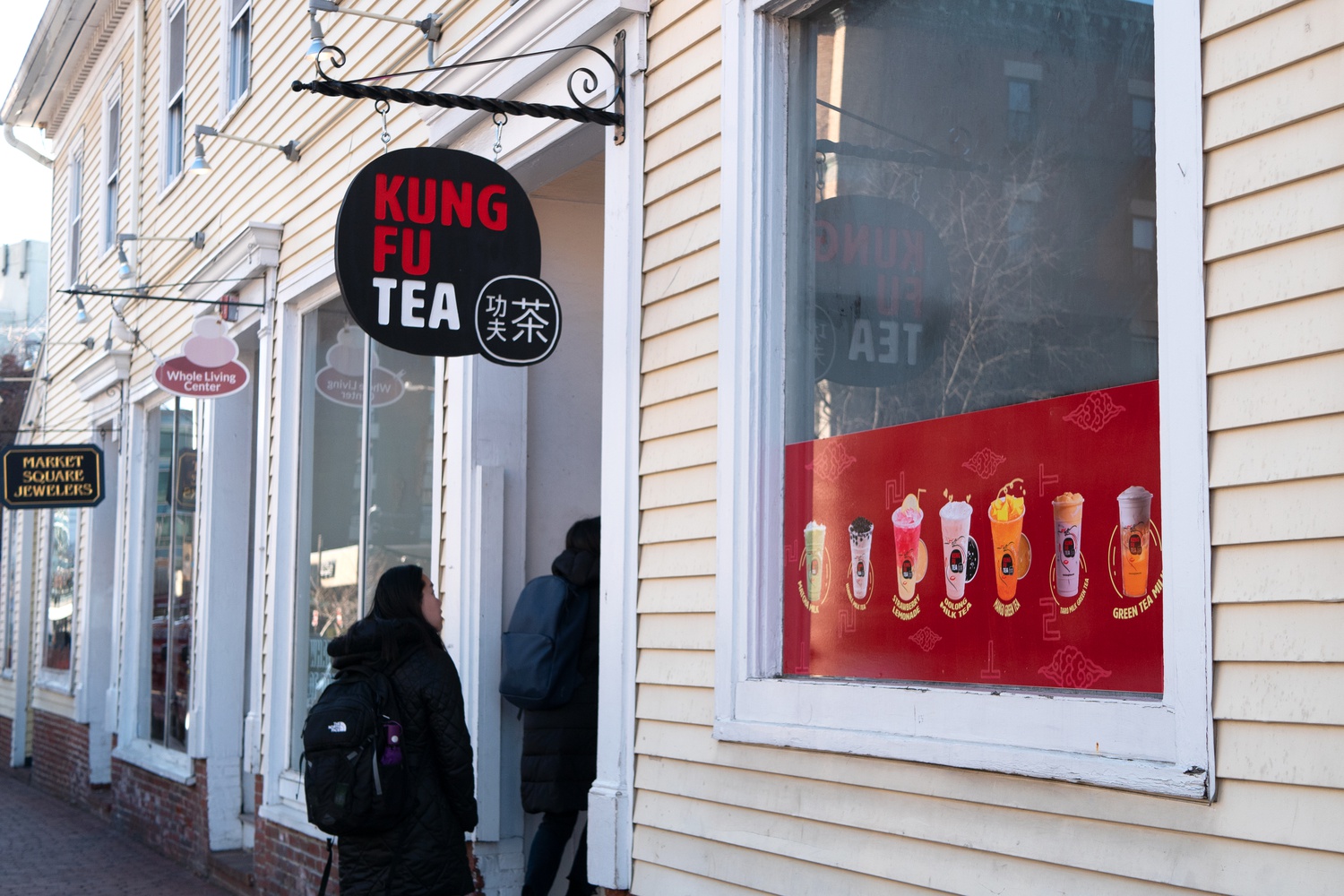 Kung Fu Tea opened this past week with deals up to 50 percent off. By Sara Komatsu
By Taylor C. Peterman, Crimson Staff Writer

Boba tea has popped into Harvard Square with the opening of a new shop and potential for more to come.

“I do think that there’s a huge market for bubble tea in general,” Jahnavi S. Rao ’22, a brand ambassador for Kung Fu Tea, said. “I know like, as apparent by the fact that lines for Kung Fu Tea today were like 30-40 minutes.”

“We are excited for the arrival of Kung Fu Tea,” she wrote in an emailed statement. “They will be a nice addition to the little yellow building at 1156 Mass. Ave.”

Kung Fu Tea is not the only Harvard Square stop where students can get their bubble tea fix. Boston Tea Stop, located on JFK Street, also serves the drink.

Julia M. Shea ’20 said “the more the merrier, for the most part,” with regard to more boba shops.

“Bubble tea shops seem to be a great gathering place for groups of friends,” she said. “One thing that I think makes bubble tea places popular is that they’re sort of liked cross-culturally.”

“Kung Fu Tea, you can have the app, and you can get rewards on it, and, you know, it’s not cash only,” Rao said.

Students may soon be able to choose from a third bubble tea option, according to a Jan. 21 Eater Boston article. Eater reported that Tiger Sugar — a Taiwanese boba chain with stores in New York and around the world — has filed paperwork for locations in Harvard Square and Allston.

Jillson, however, wrote that HSBA is unaware of plans for a Tiger Sugar location in Harvard Square at this time.

“While we don’t have any particulars at this time regarding Tiger Sugar, we look forward to welcoming them to the Square and will reach out to them upon their arrival to assist in any way that we can,” she wrote to the Crimson.

Similarly, Elizabeth Paden, project planner at the Community Development Department for Cambridge, wrote in a statement that she “[does] not have an application or any information on a Tiger Sugar in Harvard Square."

Despite praising the new boba options, some students said they worried about what the arrival of chain stores like Kung Fu Tea and Tiger Sugar could mean for locally owned businesses like Boston Tea Stop. Over the past year, Harvard Square has seen the closing of several stores and restaurants, from local bakery Sweet to national chain Au Bon Pain.

“I think it’s something to consider how the landlords and how pricing in the Square is pushing out local businesses, and we’re having what seems to be a larger percentage of chains and high-end retailers,” Eli D. Troen ’20 said.

“It’s sort of interesting to think that a third boba tea place might come into the Square,” he added.