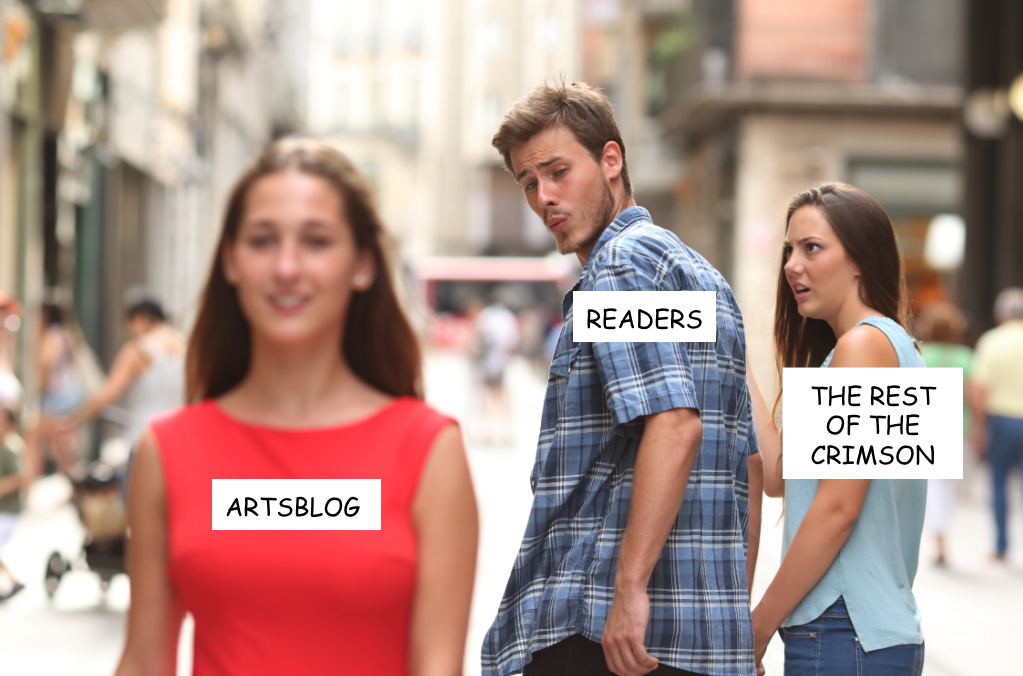 We began our tenure as the Crimson Arts Board’s Blog Executives full of optimism, enthusiasm, and whimsy. The purview of the Arts Blog is so wide that nobody, not even us, could define its limits. We were ready to challenge our writers to produce the most esoteric content they could — as long as it had some connection to “arts” or “popular culture” or, sometimes, “new media.” We even planned to assign writers to “blog shifts,” when they would have to report on breaking news in the pop culture world and beat the News board at their own game. Our ambitious plans soon crumbled, however, when the COVID-19 pandemic changed the state of the world as we knew it.

Without the usual pop culture news cycle that we had anticipated (and also with our eyeballs glazing over in our heads), we had no choice but to adapt quickly and effectively. Plumbing the deepest recesses of our own niche interests and strained creativity, we came together once a week to deliver a series of article pitches so irresistibly compelling that roughly 10% of them were claimed by our adventurous cohort of writers. They wrote about everything from people drawing pictures of fruit on their Instagram stories to the dramatic resurgence of “Twilight”’s popularity. But, you may ask, what about the other 90%? How could the writing staff fail to take full advantage of the journalistic treasure trove at their disposal every week?

Well, to give you a little taste of what you might have missed out on this year, we will rank our top Arts Blog ideas that never saw the light of day.

Pitched on President’s Day (which is, after all, a glorified birthday party), we hoped that this piece would encourage writers to search through the pop culture lexicon to find famous birthday parties, either from the real world or from art. Alas, writers simply showed no interest in giving this time-honored tradition the treatment it deserves. If you’re reading this vanity on your birthday, we apologize; maybe next year our writers will take you seriously.

On Apr. 13, renowned musician Pitbull released “I Believe That We Will Win (World Song),” a veritable masterpiece encouraging unity and perseverance as the world grappled with the COVID-19 pandemic. This song is an incredibly rich text just begging to be analyzed by an enterprising young writer, and yet as you might have guessed, no writer proved to be up to the challenge. How has the self proclaimed “Mr. Worldwide” coped with the decidedly not worldwide experience of lockdowns? We may never find out.

What began as an covert attempt to force somebody to write about Soulja Boy’s seminal classic “Kiss Me Thru the Phone” quickly morphed into a genuine request for a soundtrack to the experience of digital, socially-distanced romance.

Inspired by the Leap Day that fell on Feb. 29, 2020, we proposed that our writers pay homage to the act of leaping itself. When nobody appeared willing, we started brainstorming our own ideas, but found that ranking “leaps” demands a level of devotion and creativity that even we struggled to achieve. Our candidates included the moon landing (a “giant leap for mankind”), the scene in the 2002 Dreamworks movie “Spirit” where the horse protagonist jumps across a canyon, Drake and Future’s hit song “Jumpman,” and of course, the seminal 2010 holiday classic “Leap Day” starring Amy Adams. You’ll note that’s only four leaps. Perhaps in 2024 we will finally be ready to undertake this challenge and complete our list.

When the esteemed New York Times theater critic Ben Brantley announced his retirement, we thought to ourselves, “okay!” Then it occurred to us that this was a breaking-news arts and culture item and that blog could easily expand its malleable purview to address it in some way. So we asked our adroit writers to rank the nation’s theater critics with alacrity and as much viciousness as was required. We then swiftly realized that we ourselves could not name more than one or two theater critics. An awkward silence ensued. Do as we say, not as we do!

This wasn’t even that good of a pitch, but you couldn’t tell us that. For weeks on end, we screamed into the void: Why is every sitcom cast of the last twenty years doing a stilted and low-quality table read for the Democratic Party of Wisconsin? Clearly no one else was as baffled as we were despite our perseverance.

Sometimes, you just need to take journalism in your own hands. Beleaguered blog exec Amelia Roth-Dishy ‘22 has given up and claimed her own most passionate and masochistic pitch. The result is forthcoming.

— Outgoing Arts Blog Executives Connor S. Dowd and Amelia Roth-Dishy have used spite-fueled dark magic to create horcruxes out of all of these unclaimed pitches. They will remain immortal until somebody finally writes about Pitbull’s COVID-19 anthem, ranks every “Glee” performance, and participates in the discourse surrounding sitcom reunions masterminded by the Wisconsin Democratic Party. Contact them at connor.dowd@thecrimson.com and amelia.roth-dishy@thecrimson.com if you believe yourself up to the challenge of helping to destroy their souls piece by piece.