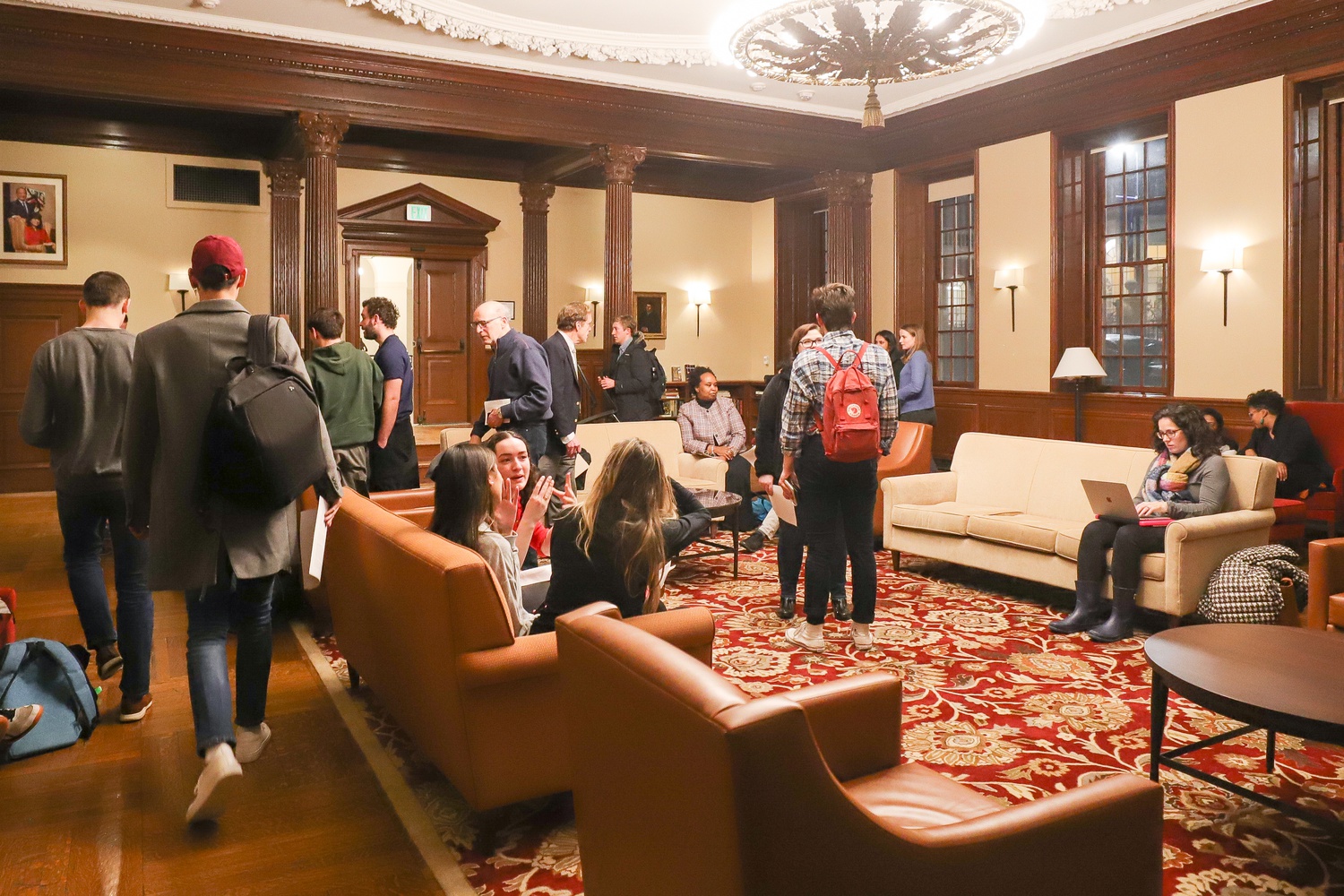 Former Dean of Freshmen Thomas A. Dingman ’67 and College Dean for Administration Sheila C. Thimba hosted Thursday’s event to hear student feedback about factors the College should consider when conducting its faculty dean search. The event came after Dean of the College Rakesh Khurana announced that his office would soon begin accepting nominations for faculty dean candidates in an email to Winthrop residents Tuesday.

Gearan and Herlihy-Gearan have led the House since August, after the College decided not to renew former Winthrop faculty deans Ronald S. Sullivan, Jr. and Stephanie R. Robinson’s contract in May. The decision came amid a semester-long controversy over Sullivan’s decision to represent Hollywood producer and accused sexual abuser Harvey Weinstein.

During the event, students shared some of their positive experiences with Gearan and Herlihy-Gearan. They recalled that, during their time helming Winthrop, Gearan and Herlihy-Gearan hosted Winthrop residents who could not go home during Thanksgiving break, attended students’ performing arts or intramural sports events, and watered a student’s hanging ivy plants.

Nicholas C. Fahy ’22 said Herlihy-Gearan often folded large piles of abandoned laundry during the summer for students to pick up.

Julie R. Hartman ’22 described the relationship between Gearan and Herlihy-Gearan and Winthrop as a “match made in heaven.”

“I can tell so many stories about how they have completely made my year and how they've enriched my life forever,” she said. “It is not an understatement to say that nothing I say is unimportant to them. I really feel that they listen.”

Outside the town hall, some Winthrop students have turned to other forums to advocate for Gearan and Herlihy-Gearan’s selection. A group of Winthrop residents circulated a petition urging the administration to permanently install the pair as permanent faculty deans.

In response to student questions about Gearan and Herlihy-Gearan’s eligibility for the permanent position, Dingman pointed to a College requirement that faculty deans hold a tenured professorship, preferably in the Faculty of Arts and Sciences.

“It's been an understanding that the stronger, more permanent faculty we can attract, then we can have this five-year initial term renewable for another five years. With tenure, you're sure of a role for life,” he said. “Also, it says something about living and learning in that these houses are not retreats from the academic life of institutions but are led by senior faculty members.”

Hartman said the College should prioritize a faculty dean’s ability to make a house feel like “home” over “academic prestige.” She also argued that Gearan’s role as the director of the Institute of Politics — which primarily engages with undergraduates — equips him to connect with Winthrop residents intellectually.

Winthrop tutor Benny Goldman said Gearan and Herlihy-Gearan’s attentiveness to student interests is reflected in the number and diversity of faculty members they have invited to speak with students in the house.

“Mark and Mary have fostered an incredible environment that students who have a variety of interests can thrive in,” Goldman said. “Even though they’re not tenured faculty, they still know what's going on broadly and what the students are interested in and they’ve done a fabulous job facilitating events around that.”

College spokesperson Rachael Dane wrote in an emailed statement that Gearan and Herlihy-Gearan were announced as interim deans who would serve only for the year, referring to an announcement made in the fall about the impending search for new deans.

The College will soon convene a search advisory committee for new deans. Thimba said during the discussion that the College hopes to conclude its search by the end of April and announce the new faculty deans before the summer. In addition to Winthrop, the College will also fill faculty dean posts in Quincy, Kirkland, Cabot, and Eliot before the year is out.