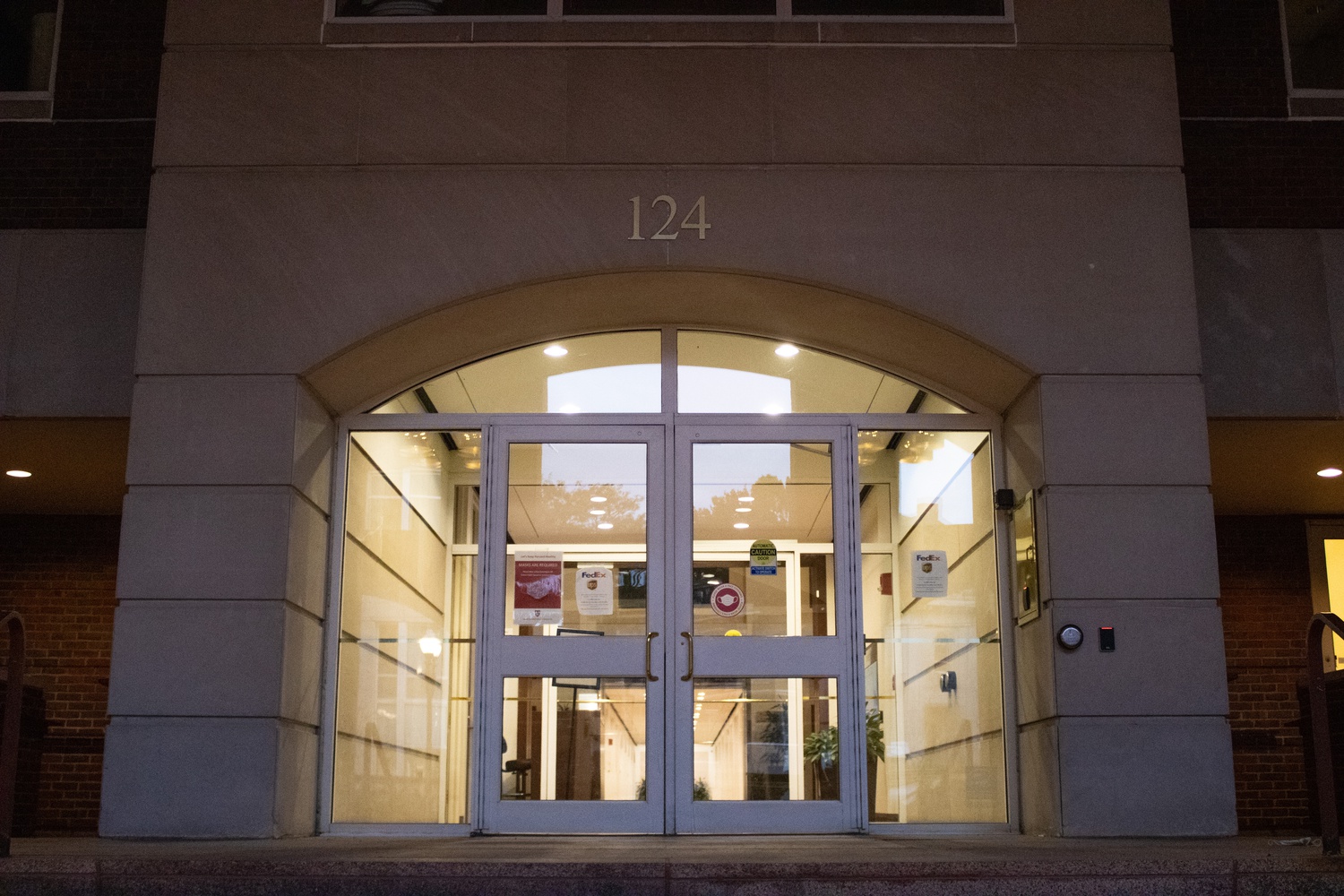 After five months of negotiations, Harvard’s clerical and technical workers union, which represents more than 5,000 workers as the University’s largest union, reached a one-year tentative agreement with Harvard Wednesday.

The new tentative agreement includes percentage raises and increases to funding for member assistance programs, as well as an updated tax reimbursement program for tuition benefits, five extra retroactive Covid-19 paid sick days, a one-time bonus, and a new joint committee for diversity and inclusion. If the Harvard Union of Clerical and Technical Workers membership ratifies the agreement, the new contract will expire on Oct.1, 2022.

In a joint statement Thursday, Harvard and HUCTW highlighted the pay increases and program updates in the tentative agreement.

“We are pleased to announce that Harvard University and the Harvard Union of Clerical and Technical Workers (HUCTW) have reached agreement on a new one-year union contract,” the statement reads. “The Tentative Agreement provides for annual pay increases and bonuses, and includes updates on a number of policy issues of mutual interest to the Union and the University.” 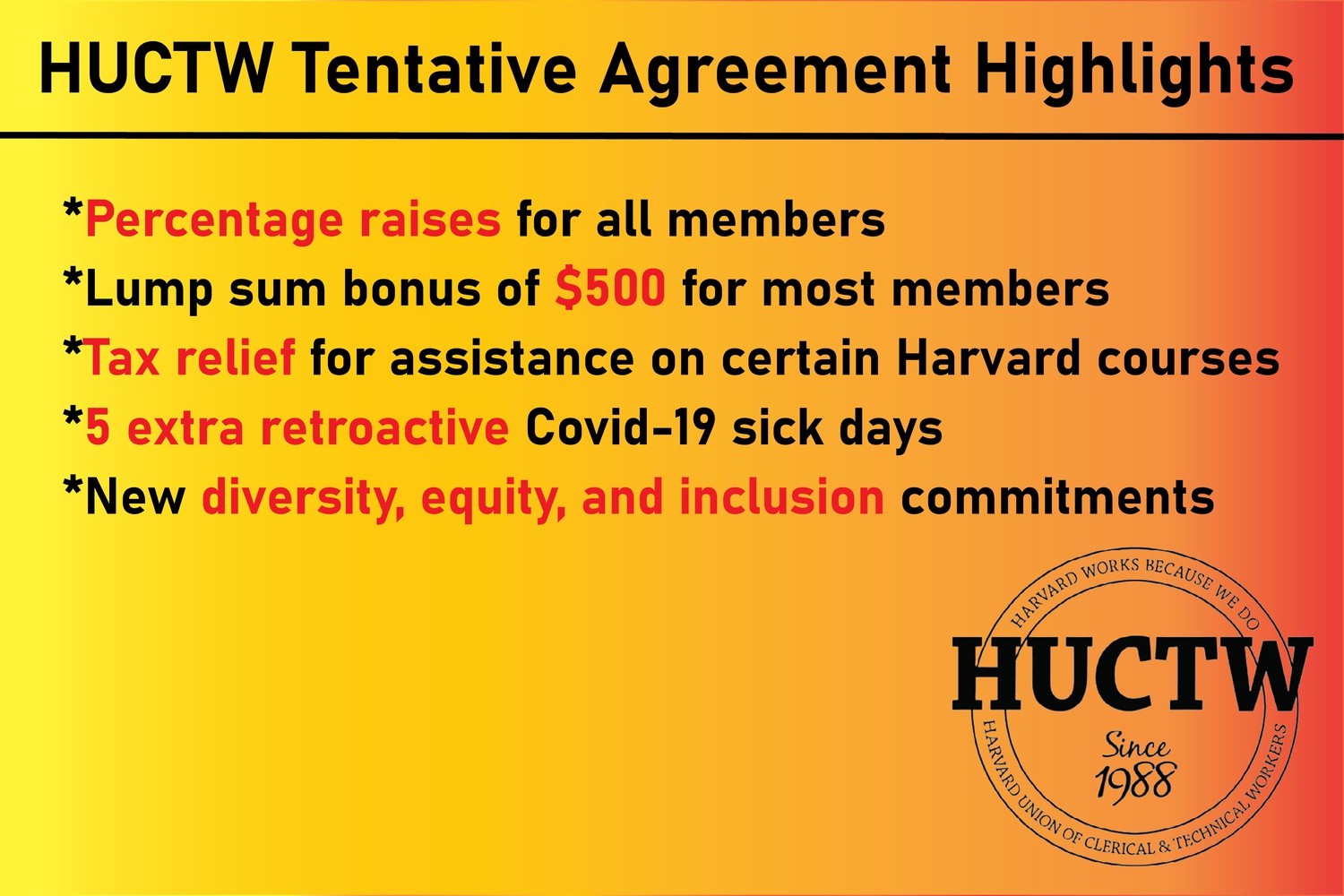 The day before, in a separate email to membership, HUCTW’s negotiating team unanimously endorsed the tentative agreement.

In the survey, approximately a fifth of respondents reported their personal income levels dropped during the pandemic, primarily from a loss in overtime. HUCTW members also reported losing 49 percent of their overtime pay, according to the survey.

HUCTW members also noted the tuition assistance program as an important issue in the survey. The program reduces the cost of taking courses at Harvard for employees, and 44 percent of respondents said it was an important motivator in their choice to work at Harvard.

Two years ago, to comply with IRS guidelines, Harvard began withholding tax on “non-job-related” courses that members took as part of the tuition assistance program, according to an email sent to HUCTW membership in July. Members, however, reported inconsistent standards for determining whether a course is “job-related,” the email stated.

The new tax assistance fund established in the tentative agreement will reimburse taxes for “non-job-related graduate courses,” according to the union’s Wednesday email. For consistency, Harvard will also provide the union and management with new guidelines about what qualifies under “job-related” classes.

The University will also raise funding for HUCTW and Harvard’s joint employee assistance programs, which cover areas such as child care, education, and transportation, to nearly $3 million, a 2.75 percent increase.

In the survey, 20 percent of respondents also reported having used more sick time to care for healthy dependents, mostly due to care or schooling closures related to Covid-19.

The agreement includes five retroactive Covid-19 sick days. Members can use these additional sick days to receive pay for Covid-related absences from April 2020 to the end of May 2021.

While HUCTW contracts are typically three years long, the tentative agreement is for one year. In an August interview, HUCTW president Carrie E. Barbash said a shorter contract would allow both parties to accommodate post-pandemic uncertainties.

“I think we’re both, right now, because of some of the uncertainty of return to total normality, still leaning towards a shorter contract,” she said.

In their announcement to members Wednesday, HUCTW leadership wrote the one-year duration is “the best strategic option.”

The tentative agreement now needs to be ratified by a majority of voters. In an emailed statement Wednesday, Barbash wrote the union’s elections committee will set a ratification vote date “as soon as possible,” likely in the coming weeks. The vote will be held online using a secure voting platform.