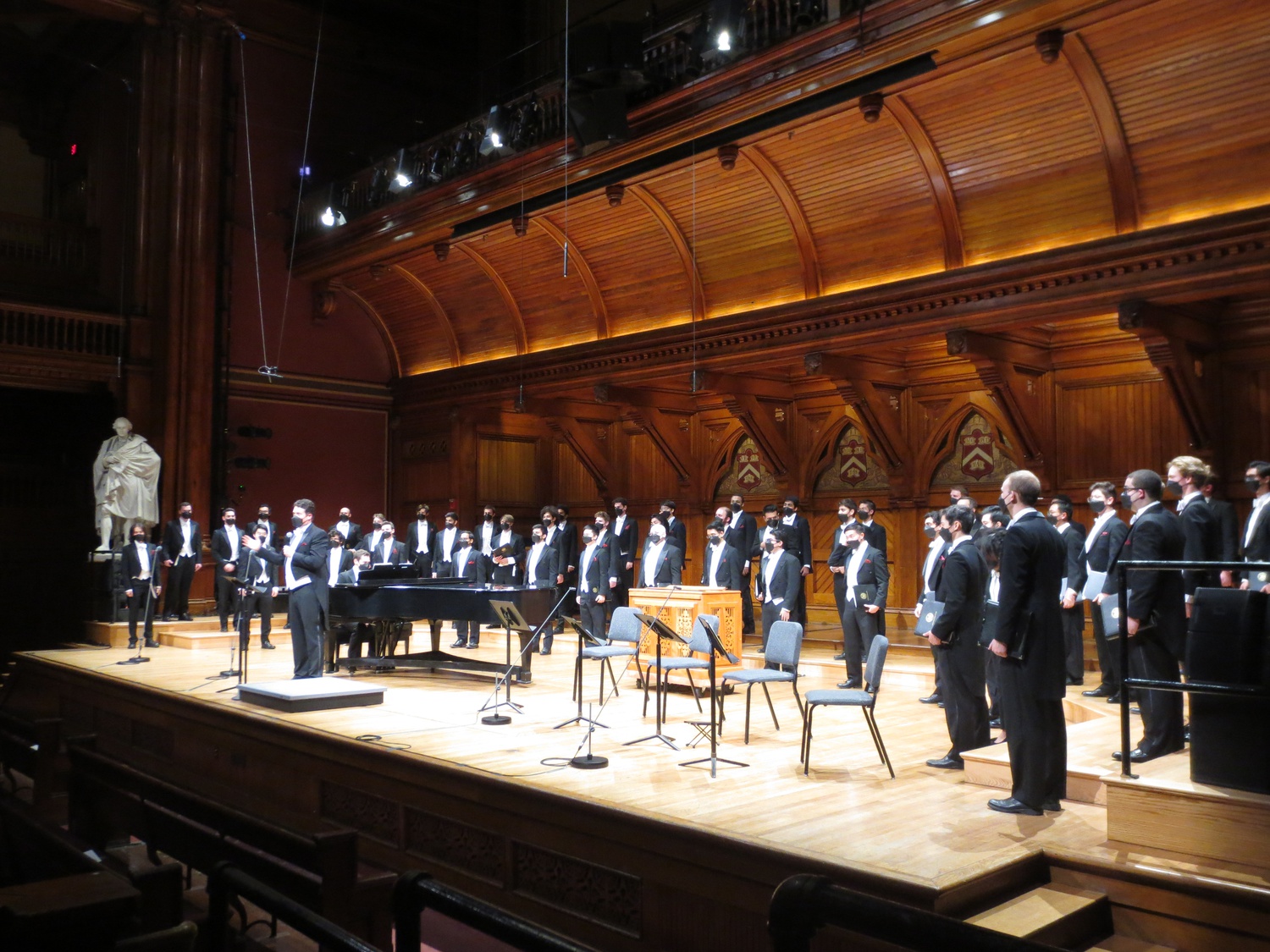 The historic Harvard Glee Club hosted its third annual “Hand in Hand Concert” on Oct. 29. After a year off due to the pandemic, America’s oldest collegiate choir took the stage at Sanders Theatre, as choirs from Princeton and Yale Zoomed in from their respective campuses, for a celebration of global choral music.

Starting out in a sprint, Yale’s 90-voice all gender chorus kicked off the night with their rendition of Nathanel Dett’s “Ave Maria.” The deep bass undertones highlighted the lightness of the tenors and sopranos, building a strong synergy of vocals. “Don't be shy everybody, it's our first concert of 2020!” said Yale’s School of Music’s professor of choral music, Jeffrey Douma, eliciting cheers from Woolsey Hall, Richardson Auditorium, and Sanders Theatre alike. After that brief interlude, they fluidly switched into Church Slavonic for a rendition of Rachmaninoff’s “Ave Maria,” followed by a live premiere of “Meditation,” a composition by post doc poet Joel Thompson. The Yale Glee Club indeed quite literally lifted the atmosphere with their escalating harmonies, offering an unconventional spin on standard choral work. They premiered another piece with Arianne Abela’s lively song “Because You Sang,” then picking up the tempo in “Angel Band,” where “my spirit loudly sings” sounded just as the vocals crescendoed. They rounded out their performance with two school songs, “Football Medley” and “Bright College Years,” which featured digs at John Harvard that elicited snake hissing sounds from the Sanders crowd.

From the first note, the Princeton Glee Club kept the crowd guessing. Under the direction of conductor Gabriel Crouch, the soprano-dominant choir stepped out to form an unconventional setup of singers — unlike a traditional choir where the singers stand in sections according to voice part, there was a scattering of voices throughout. This formation allowed them to keep the men in the center — helpful for choirs with a greater number of women than men. The Tigers chose to focus on a maritime theme in their repertoire. In “The Bermudas,” they combated the technically difficult repertoire of harmonies head on, like the nautical storm that it depicts. Likewise, the three-movement Francis Poulenc piece was indeed a very arduous and strenuous work, missing just a few more baritones and tenors to counterbalance the cacophony of tritones and overpowering sopranos. However, their performance ended on a high note, flying paper planes from the Harvard balcony and garnering more than three rowdy cheers for Old Nassau.

Although the sons of Eli Yale and the Princeton Tigers put up a good fight, the Crimson’s attention to detail made for an unparalleled collegiate choral performance.

Performing last but certainly not least, the Harvard Glee Club took the stage with William Walker’s “Southern Harmony,” transitioning the night into a more calm and romantic territory. “It has been 616 days since we last took this stage,” conductor Andrew Clark noted, before reflecting on the choir’s mournful yet aspirational attitude at a time when other choirs around the globe fell silent. Then, the choir embarked on a global and temporal journey, beginning in Russia with a world premiere arrangement of Pavel Chesnokov’s “Svete tihiy.” Vladimir Morosan’s TTBB arrangement made for an intimate listening experience, where each accent could be detected due to the controlled undertones of piano fortitude. The chorus then traveled back to medieval Italy with Monteverdi's “Nymph’s Lament.” Accompanied by a cello and a trio of lute instruments, the sweet mezzo soprano high notes of soloist Benjamin Wenzelberg ‘22 sounded as delicate as the plucking of the strings. Wenzelberg portrayed the theme of torment so meticulously that the transfixed crowd was compelled into a standing ovation, surely the highlight of the night.

Descending south of the equator to Cape Town, Bongani Magatyana’s interpretation of family and property in South Africa in the world premiere of “Iinkomo” was evident in the valiant layering technique and staccato polyphony. The journey continued on to mainland China in the folk song “Mountain Song,” performed with the help of soloist Andrew Lu ‘24, whose precise intonations stayed true to the linguistic traditions of China's regional choral traditions. Samuel Webbe’s “Glorious Apollo” featured the senior-led semi-chorus that brought the audience back home to Black choral music in America.

Finally, the Harvard Glee Club’s president, Jay Sastry ‘22, offered some light-hearted entertainment in the form of one stolen Princeton Tiger, pictured here, and then proceeded to tear Old Nassau a new one in the “Football Songs” after the controversial loss at the Harvard-Princeton game the previous weekend.

The night didn't escape without flaws, with both the audio and video aspects of the simulcast virtual performances preventing the audience from fully engaging with the beautiful harmonies due to the flattening effect of the speakers. However, these difficulties couldn’t outweigh the benefits. The Princeton Tigers, for instance, compensated for the audio difficulties with skillful camerawork that captured soloists up close and personal, using the virtual setup to their advantage. Despite performing in masks, the Yale Bulldogs sounded clear as a bell, thanks to months of acclimating to performing in them. Meanwhile, the male dominated ensemble of tenors and basses at Harvard blended the microphone gaps so beautifully that their performance merged into an indistinguishable spectrum of unified voices — a true representation of choral excellence — but it is likely that this magic didn’t fully carry over to the virtual listeners.

Whether one came away from the night thinking John Harvard reigned victorious or not, the important cause behind the event was that all proceeds went to Save the Music, a national nonprofit whose grants support music programs in public schools across Massachusetts, Connecticut, and New Jersey. It goes without saying then, that the night succeeded in achieving the true mission of any Glee Club: choral performance in the name of unity, good humor, and joy.