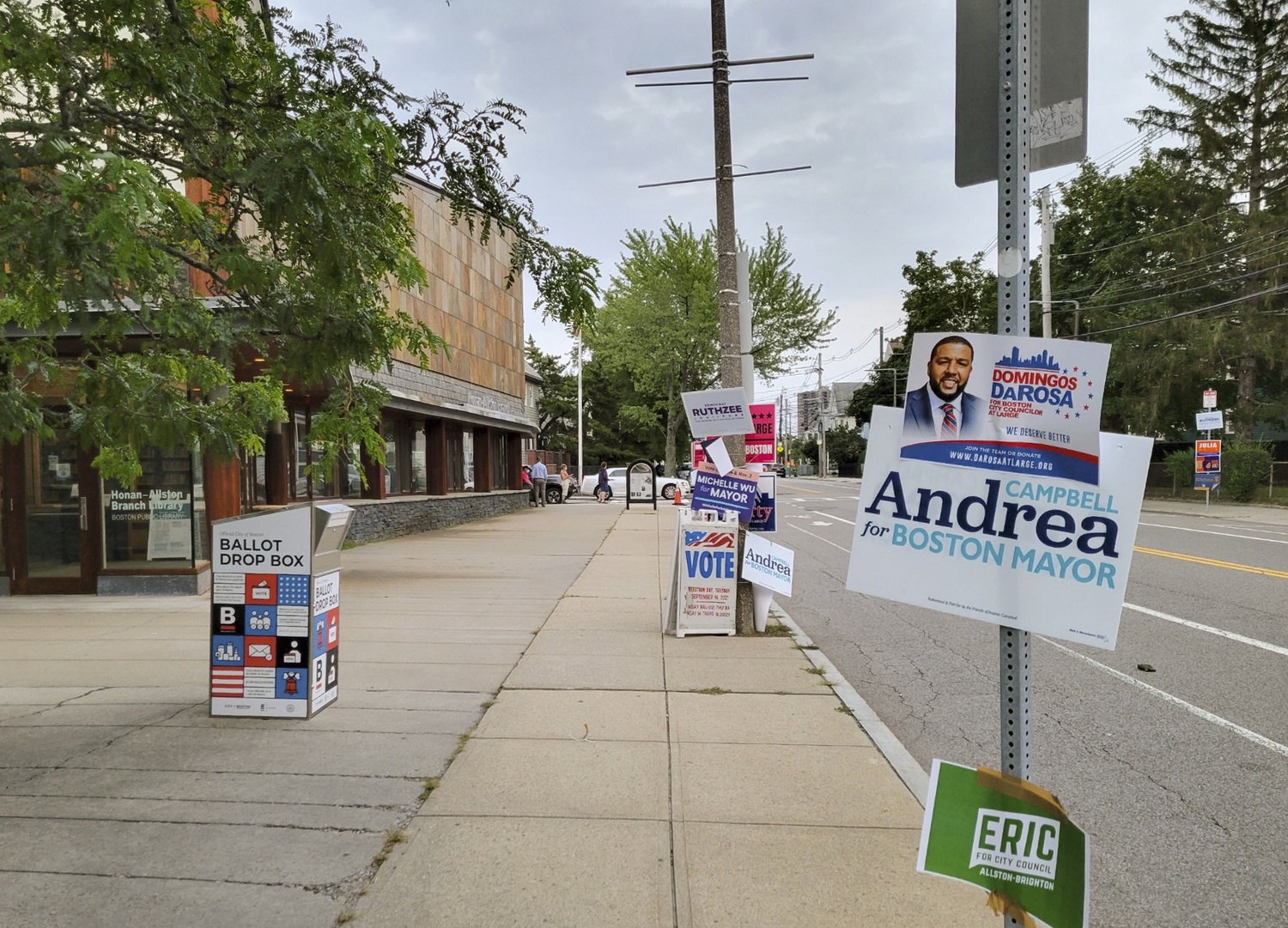 With all precincts reporting, the city’s unofficial tally showed Wu in first with 33.4 percent of the vote and Essaibi George in second with 22.5 percent, as of Wednesday morning. Andrea J. Campbell, also an early frontrunner, failed to advance with 19.7 percent of the vote, as did Acting Mayor Kim M. Janey, with 19.5 percent. 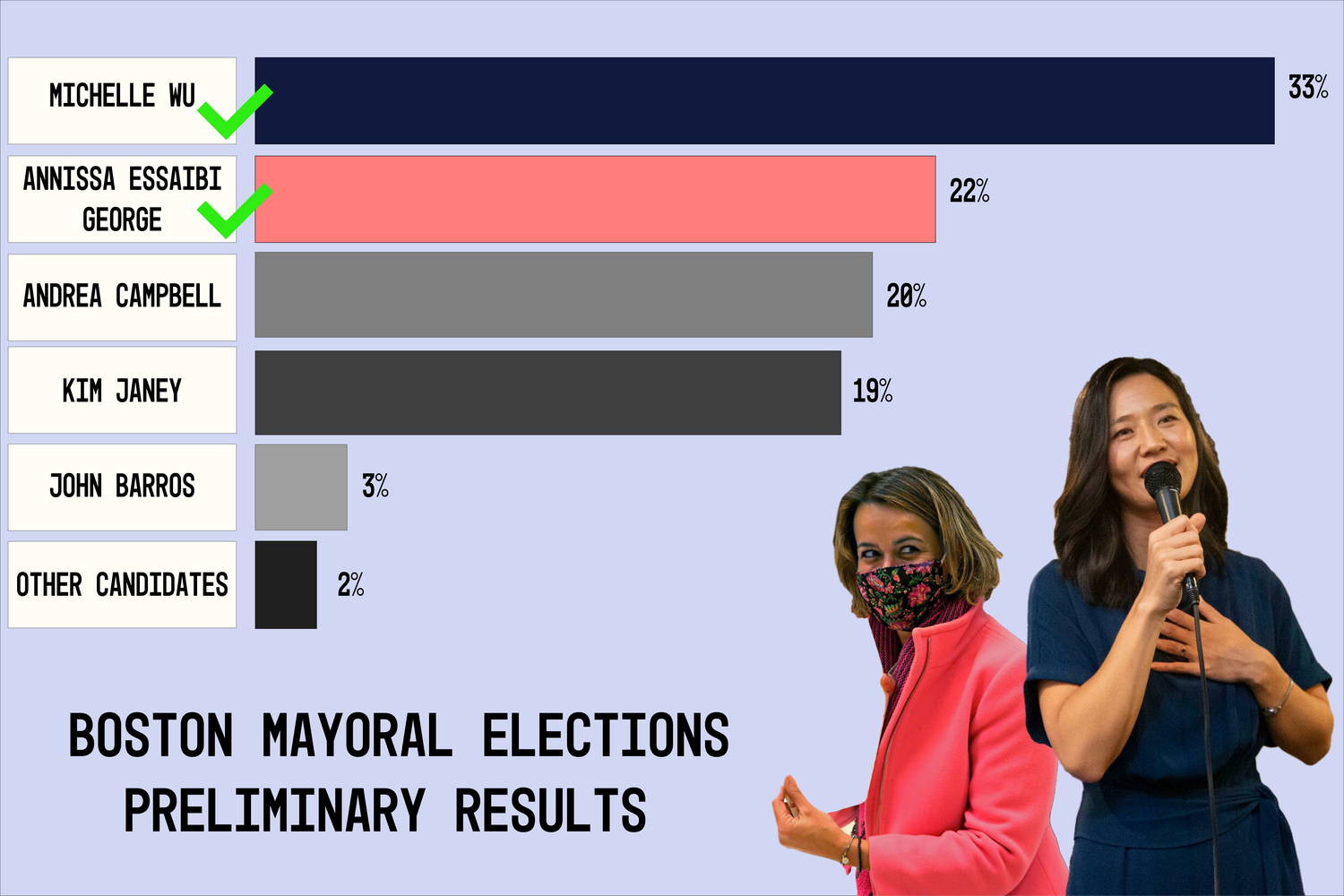 This fall’s contest will determine who will take over Janey’s position as Boston’s mayor, who herself succeeded former Mayor Martin J. “Marty” Walsh following his confirmation as Labor Secretary.

Wu, who polls have consistently shown to be the frontrunner, received strong backing from some in the Democratic Party’s progressive wing — including U.S. Senator Elizabeth Warren (D-Mass.), Wu’s former professor at Harvard Law School. Wu also campaigned on the promise of a Green New Deal, winning her the endorsement of the Boston Sunrise Movement.

Essaibi George, by contrast, campaigned on more moderate positions, such as rebuilding Boston’s economy in the wake of Covid-19 and reforming the Boston Public Schools system. Essaibi George, a former BPS teacher, pledged to “rebuild trust with school communities,” according to the campaign’s website.

The election results were initially delayed, with only a few hundred votes made public on Tuesday night. According to Massachusetts Secretary of State William F. Galvin, this was because of a flood of mail-in and drop box ballots, with 7,000 collected on election night — about 4,000 more than expected.

In a press release following her victory, Wu thanked her opponents for “their long records of incredible work” in the city, and said she looked forward to “continuing our fight for the future of our city.”

“Together, we have and will continue to take on the big challenges we were told would be impossible—from passing paid parental leave to standing up to big corporations to protect rental housing,” Wu said. “Now is the time for all of us to lead.”

In her victory speech, Essaibi George acknowledged the “historical field of candidates” while thanking Janey — Boston’s first female mayor and first mayor of color — who she said “shattered a glass ceiling that was left intact for far too long.”

“Young women and girls everywhere — Black women and girls — have seen a reflection of themselves standing at the mayor’s podium,” Essaibi George said. “Kim, you did that for countless girls.”

Essaibi George also congratulated Wu on her victory, and added that she looked forward to campaigning and working with Wu “for a better Boston.”

Nayleth E. Lopez-Lopez ’23, a Harvard student who voted in the preliminary election, said she was happy to see Wu advance.

“I like her vision,” Lopez-Lopez said of Wu. “I feel like she’s shown a lot of promise on City Council, and I think she’d be a great next mayor.”

Wu and Essaibi George will face off in the general election on Nov. 2 to determine who will become Boston’s 56th mayor.

Regardless of which candidate wins the November general election, the new mayor will be Boston’s first elected woman and person of color to serve as mayor — a prospect Lopez-Lopez said she was “so excited” about.

“It’s so incredible to me, ever since it first started, how the field was dominated by women,” Lopez said of the mayoral election. “It’s very empowering to be able to have our next mayor be a woman.”