‘It’s Just So Different’: Harvard Students Return to the Classroom After 18 Months 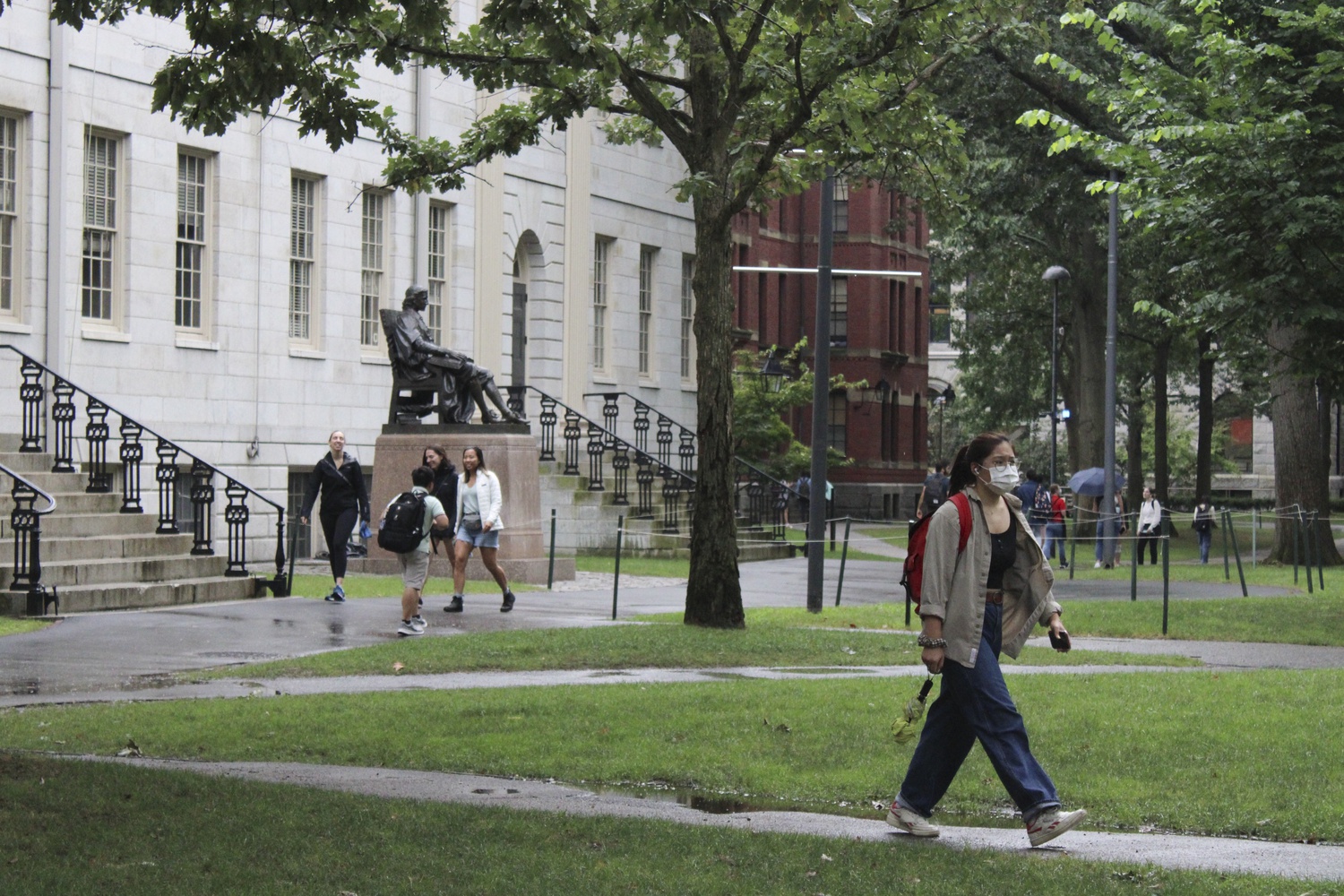 Students walk through Harvard Yard on the first day of classes Wednesday. For many students, the day marked the first time they received in-person instruction in more than a year. By Pei Chao Zhuo
By Emmy M. Cho and Isabella B. Cho, Crimson Staff Writers

After more than a year of Zooming into classes from across the world, Harvard undergraduates walked into classrooms Wednesday to start their fall courses.

“It felt so good to be back in the classroom,” Harini S. Kannan ’24 said. “I have missed that feeling so much.”

For Kannan, who resides in the Quad, one of the challenges was getting to her 9 a.m. class — she took the Allston Loop shuttle to reach the new Science and Engineering Complex in Allston for Engineering Sciences 53: “Quantitative Physiology as a Basis for Bioengineering,” an introductory bioengineering course. Still, it was worth the trip, she said.

“It felt really good to pay attention, and sit in front of someone who’s teaching you — it really honestly brought back the joy of learning,” she said.

Grace J. Kim ’25 said her first course, Art, Film, and Visual Studies 40A: “Introduction to Still Photography,” was initially intimidating because of the large proportion of seniors, but compelling nonetheless.

“The photography one was really exciting,” Kim said.

Despite many students’ excitement about in-person classes, some continued to leverage the benefits of online learning to work around scheduling conflicts. Kim’s photography course conflicted partially with Computer Science 50: “Introduction to Computer Science” — one of the most popular classes at Harvard — and reverted to virtual learning for the latter.

“[AFVS 40A] was a smaller class, and the CS50 one was the complete opposite,” Kim said.

Freshmen also saw their first chance to enroll in historically popular courses. Jonathan D. May ’25 began his first year at the College with Economics 10a: “Principles of Economics” — another course with consistently high enrollment rates — jointly taught by professors Jason Furman ’92 and David I. Laibson ’88.

Despite their formidable academic reputations, May said Furman and Laibson were approachable and made the learning environment comfortable and engaging.

“It was crazy to see how accomplished the Economics professors were, but also how fun they made the class,” he said. “They were super energetic.”

May said he was looking forward to Expository Writing 20 because of its smaller enrollment size, which he hoped would allow for increased interactions between students and stronger relationships.

“Expos 20 was great because it was a smaller class,” he said. “I feel like I’ll be able to get tighter with that community, and it’s really nice to have support in writing because I feel like it’s going to be so different.”

“It was ridiculously crowded this morning because there’s so many freshmen, and everyone was eating breakfast,” she said. “It was really fun to be back because I hadn’t eaten a meal there forever.”

Tu, who is a Peer Advising Fellow, said she also enjoyed getting to know and advise her PAFees in person.

“They’re wonderful, and it’s so exciting to PAF in person,” she said. “Last year, it was virtual — I still loved my students and it was a good experience, but it’s just so different getting to do it in person.”