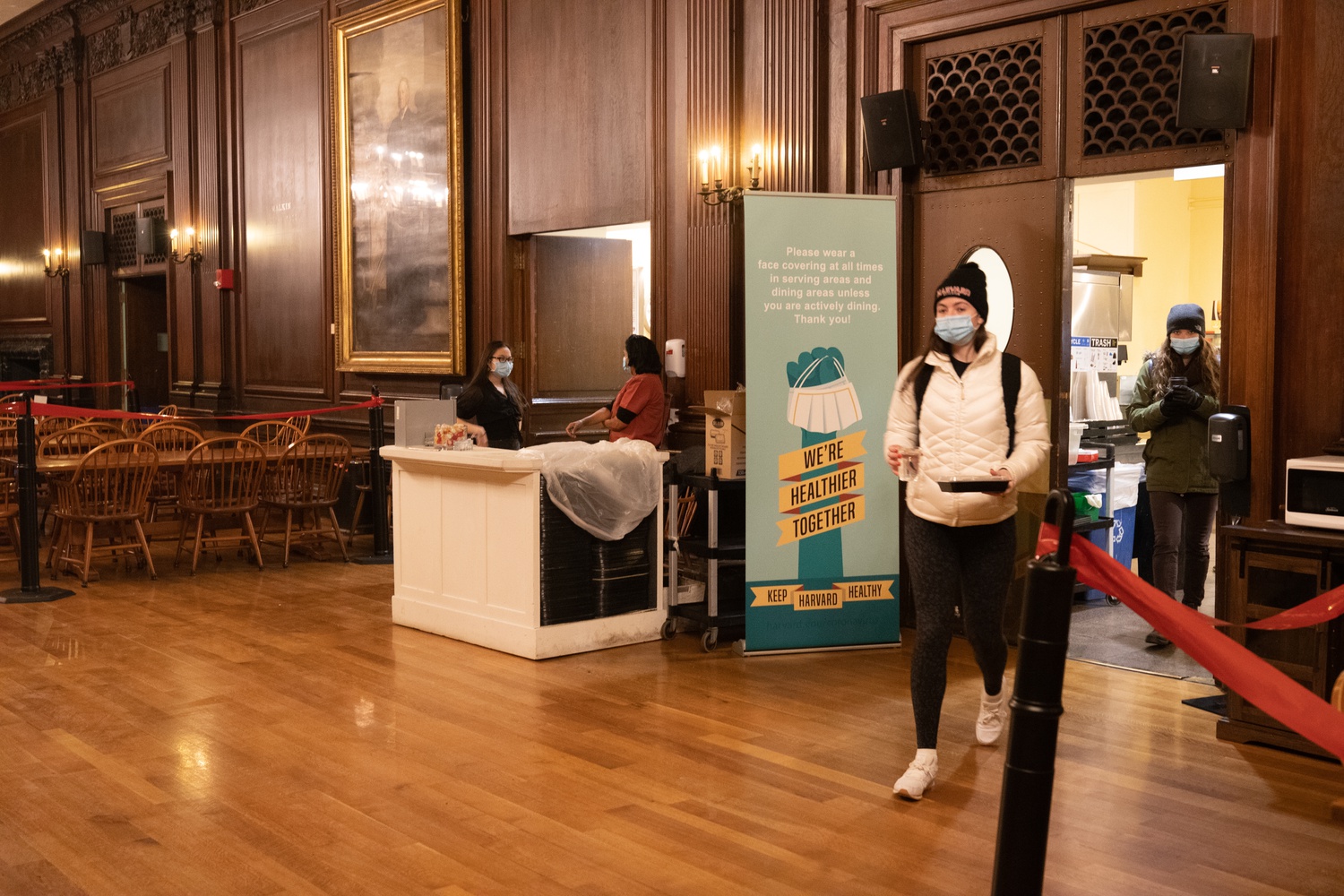 All dining halls switched to strictly takeout options for the first two weeks of the spring semester in an effort to reduce high-density gatherings on campus. Harvard has opened CGIS Café, Ticknor Lounge, and the William James basement dining area to accommodate Quad students who are unable to go to their rooms in between classes.

At each of the three locations, select tables have been marked unavailable with signs or blocked off to comply with social distancing guidelines.

But Currier and Pforzheimer House did not email Quad students, who often are unable to return to their Houses until the evening, about the available indoor dining areas before classes began on Jan. 24.

Pforzheimer resident Sebastian L. Garcia ’24 said he was unaware of the three locations and skipped lunch before his class on Monday.

“I just did not eat lunch because I didn’t know where to get lunch,” Garcia said. “I felt like the administration didn’t really think about the quad students at all, like they had kind of forgotten about our concerns for what we need to do for lunch.”

Garcia added that the decision to allow Quad residents to eat at one of the indoor locations seemed counterintuitive.

“They are saying that we gotta de-densify the campus, but they are still going to put us in these three places together,” Garcia said. “So what’s the difference between that and just eating in the dining halls like we would normally?”

Sophomores Afiya Rahman '24 and Ananda M. Birungi '24 ate in Ticknor Lounge Thursday after getting their to-go lunches from Adams House. Both Pfoho residents said it was their first time going to any of the three locations that week.

“I’ve been going back to Pfoho or eating at the Women’s Center because I work there, but sometimes there’s no option,” Birungi said. “It just sucks that you can’t just sit down and eat in the dhall. You have to figure out, ‘Oh, where am I gonna go eat?’”

Rahman also shared frustration over having to find another location for lunch but said eating in Ticknor Lounge is “generally safer” than in a crowded dhall.

“I feel like it’s kind of redundant for us to be eating unmasked in a public space rather than a dhall,” she said. “But it makes sense because there’s not that many people here versus Adams would be insanely packed.”

Anika Bagaria ’24 said that living in the Quad and the below-freezing winter weather make grab-and-go dining inconvenient, especially now that classes have started.

“It’s definitely a lot harder to do the Quad trips back and forth and just logistically makes no sense — one, because of my class schedule, two, the weather,” Bagaria said. “No one wants to be walking an hour a day.”

Currier resident Emi P. Cummings ’24 said losing the chance to socialize with friends during meal-times was “disappointing” and cast doubt on whether the policy would significantly minimize the virus’s spread.

“It’s something that a lot of students would say they look forward to at the end of classes, to be able to see a familiar face and catch up on something that happened that day,” she said. “I don’t exactly know how effective restricting dining is because I think that students still will find alternatives on ways to see their friends without actually necessarily paying for a meal.”

As a student athlete who leaves early in the morning for practice and returns to the Quad around 11 p.m., Taybah A. Crorie ’24 said she eats almost all her meals outside of the Quad. This week, she started reaching out to a different acquaintance every day to eat in their dorm rooms.

“I’m trying to organize each lunch and dinner with a friend who lives by the river,” she said.

“It’s quite a good opportunity for me to get to know them better,” she added.

Crista Martin, dining services director for strategic initiatives and communications, wrote in an email that HUDS plans to return to in-person dining when it is safe for dining hall staff and Harvard students, but did not specify when that would be.

“HUDS works in close coordination with the College and the University’s Health & Safety experts to monitor current community transmission rates and adjust the services provided accordingly,” Martin wrote. “Like everyone, we are eager to resume more normalized operations as soon as it is safe for our community – including our HUDS team – to do so.”

Bagaria said that while the change is “not ideal,” takeout dining allowed her to spend more quality time with her roommates throughout the day.

“There have been a couple of silver linings like my block mates and I now do lunch and dinners together all the time in our room,” Bagaria said. “But I missed seeing everyone else in Currier.”