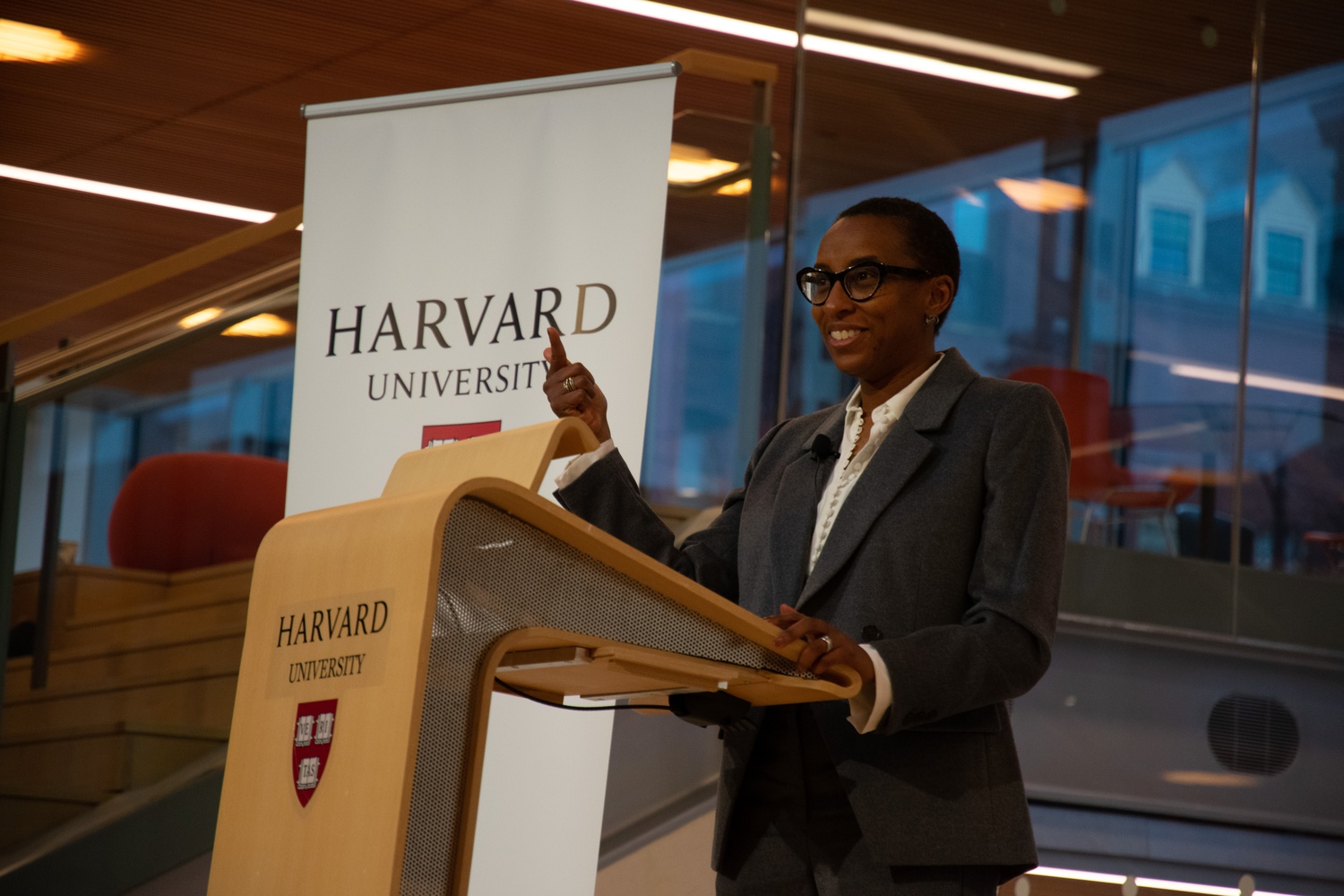 President-elect Claudine Gay addresses an applauding crowd in the Smith Campus Center. By Julian J. Giordano
By The Crimson Editorial Board
This staff editorial solely represents the majority view of The Crimson Editorial Board. It is the product of discussions at regular Editorial Board meetings. In order to ensure the impartiality of our journalism, Crimson editors who choose to opine and vote at these meetings are not involved in the reporting of articles on similar topics.

As the fall 2022 semester faded to a close, a new era of our University came roaring into existence. Just over a week ago, Harvard announced that Dean of the Faculty Claudine Gay would become President Claudine Gay, completing her years-long ascension to the mighty office housed at Massachusetts Hall.

Before engaging the substance of this appointment and how its effects will ripple through this University for years to come, we feel compelled to take a moment to memorialize it — to stop and take a picture as history is made. No matter how you feel about Gay, be you her fiercest critic or loudest cheerleader, it should strike you that she has accomplished something remarkable. As an institution that has crowned political dynasties, cured the incurable, and uncovered some fundamental secrets of the universe, Harvard may well be the world’s most renowned university; it is also one that denied women and Black people admission for centuries.

Starting July 2023, a Black woman will proudly claim Harvard’s highest office — becoming the first Black president and president of color in the history of the University. Her impending tenure provides an unprecedented, deeply resonant model of leadership for millions across the country and the globe; we hope its effect will be equally transformative in sparking change.

When University President Lawrence S. Bacow announced his retirement, this Editorial Board remembered his administration as one marked by the trappings, good and bad, of an age fast passing and perhaps already gone. His was a Harvard of caution, incrementalism, and a pedantic aversion to reform that sometimes verged on condescension. It was also, fortunately, a Harvard that defended free speech, that held fast to its values even when the pressure ran high and the cost was dear. Nevertheless, Bacow’s seeming resistance to deep, structural change perpetuated injustices and left many dissatisfied.

Now, Gay’s ascension to the University Presidency gives us hope for something better — something different. The momentousness of her very appointment feels as though it heralds the start of a more progressive era at Harvard, one that understands representation, diversity, and inclusion as essential to creating the kind of vibrant intellectual community that can in turn create a better world.

Gay’s work as an academic and administrator reflects deep commitment to these tenets. A leading scholar on democracy and political participation, Gay’s research evokes a nuanced appreciation for the power of representation and the policies needed to achieve it. For Gay, these values are not academic abstractions, either: As Dean of Social Sciences and then the entire FAS, she created an expansive initiative on inequality in America, oversaw hires intended to bolster Harvard’s offerings in the areas of climate change and ethnic studies, and sanctioned several well-known professors accused of sexual harassment.

These are the accomplishments of someone with vision: someone who sees the value in pulling together perspectives from a variety of personal and academic backgrounds, who wants to marshal this University’s estimable resources to tackle significant issues, who used some of her first words as President-elect to remind us that academia can no longer be constrained to an ivory tower.

Today, we celebrate Gay’s presidential appointment as a historic moment with potential for immense progress; down the line, we hope to celebrate the decisions Gay makes as president for realizing that potential.

The sordid truth is: Gay has a hard term ahead of her. This world is not kind to Black women in positions of power. Too often, they are dismissed as diversity hires, or handed impossible challenges so that America may point a finger in blame when they fail. Gay has already received criticisms of the former variety for an alleged lack of academic merit and administrative experience. These denouncements are categorically untrue. She has earned accolades for her research at every institute of higher education she has attended: the best senior economics thesis at Stanford as an undergrad, followed by the best dissertation in political science at Harvard as a Ph.D. student. She was appointed as a professor at both Stanford and Harvard. And, really, we need not speculate about how Gay will perform: For years now, she has led the single largest administrative unit at Harvard through tumult, scandal, and a pandemic.

If she is not prepared, who is?

We have seen firsthand Gay’s executive ability. We have no doubts that she is beyond qualified, as both a scholar and an administrator, to serve as Harvard’s 30th president.

Gay’s appointment begins a veritable changing of the guards at Harvard. She will have final say on the successors for four of our current deans — major appointments that will deeply shape our community, given Gay’s own ascension to President from FAS dean. With the looming Supreme Court decision on admissions practices, she will likely lead the University through the end of affirmative action, studded with calls from the student body and this very Editorial Board to rethink Harvard’s admissions policies and preserve its racial diversity.

This Board has appreciated the Bacow administration at an arm’s length — notably imperfect, but the devil we knew. Now, we dare hope that Gay’s presidency will bring something more — that she will leverage her experience and vision to improve this old, complicated University from the inside out.

Further into Gay’s presidency, we will likely express frustration at her handling of policy issues, in another episode of the timeless push and pull between steadfast administrators and idealistic students. Indeed, her prior experience within Harvard’s administrative ranks means we have all the more responsibility to continue holding her accountable. But for now, as the sun prepares to rise on Gay’s presidency and the progress it may foretell, we celebrate her achievement. Any criticisms, no matter how strident, can wait at least a few beats as history is made before us.