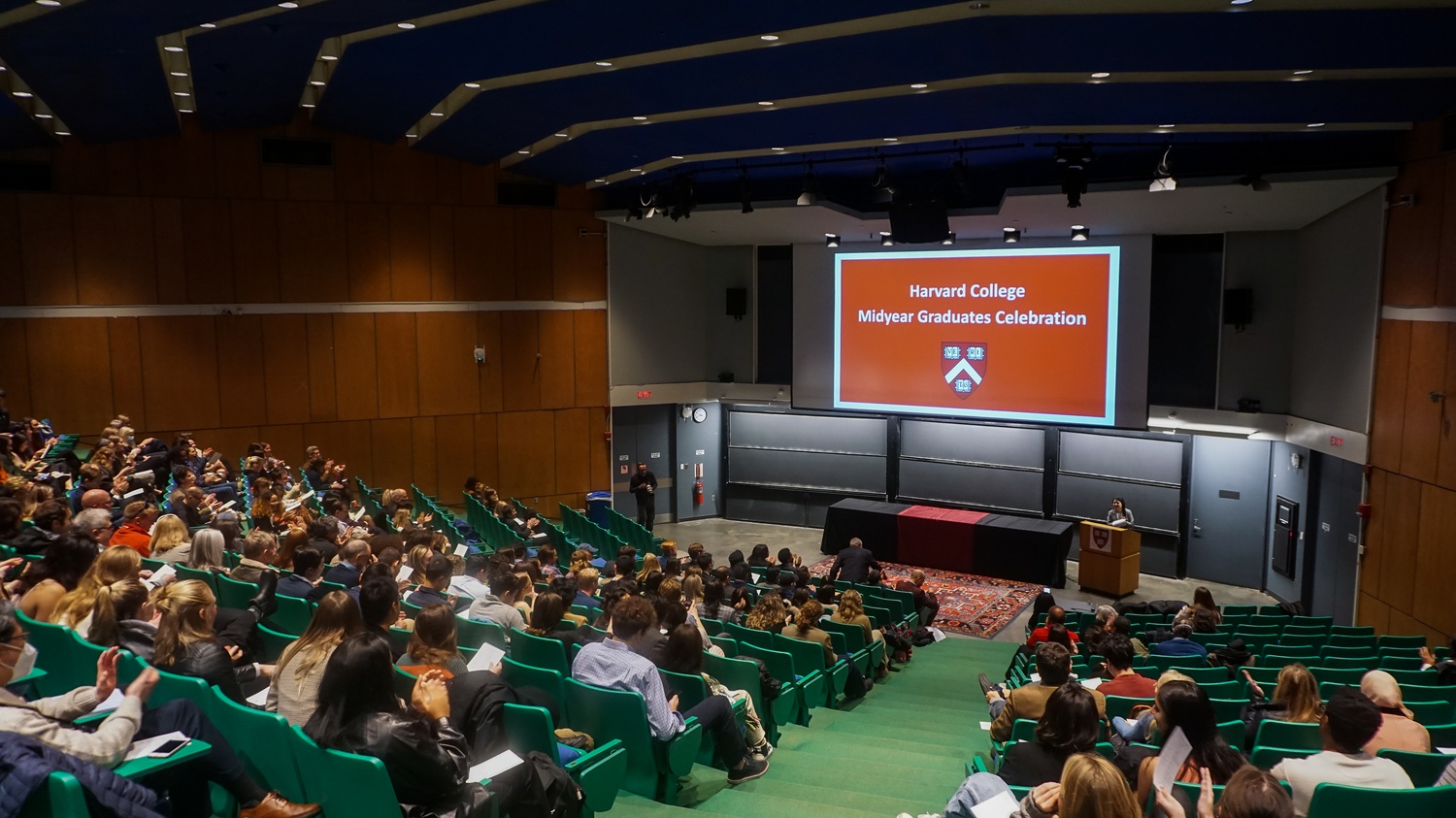 Offcycle Harvard students gather in the Science Center B lecture alongside friends and family for the Midyear Graduation Ceremony and celebration. By Addison Y. Liu
By Vivi E. Lu and Leah J. Teichholtz, Crimson Staff Writers

The celebration recognized November and March degree candidates who finished their coursework over the summer and this term, respectively. Hosted in a Science Center lecture hall, seniors — some clad in graduation garb, others in jeans — gathered with family and friends for the ceremony.

During the Covid-19 pandemic, Harvard College saw an uptick in students who opted to take time off, resulting in a higher number of off-cycle graduates. Roughly 240 seniors graduated off-cycle last year, compared to about 130 in 2020 and around 115 in 2019, according to Harvard spokesperson Jonathan Palumbo.

Dean of the College Rakesh Khurana — himself an off-cycle graduate of Cornell — called on seniors to embrace “serendipity” in their lives in an address during the ceremony.

“As December graduates, you’ve already departed from the script you were following when you arrived here,” Khurana said. “You have had the chance to shape Harvard in uncharted ways through discovery and unexpected decisions. And in doing so, you’ve had to be comfortable with being uncomfortable.”

Philip W. Lovejoy, the outgoing executive director of the Harvard Alumni Association, encouraged the new graduates to connect with alumni and “steward the university into the future.”

Scott V. Edwards ’86, chair and professor in the Department of Organismic and Evolutionary Biology and director of the Faculty of Arts and Sciences’ graduate studies, encouraged seniors to travel and “remain broad and active” in their interests.

In his address, Edwards recalled biking across the country to raise awareness for Black Lives Matter during the summer of 2020.

“On that trip, I really learned — and continued to practice — simply listening to people, hearing them, giving them their space, empathizing, figuring out what’s important to them,” Edwards said. “Hopefully, that’s a skill that your Harvard education has helped you to refine and apply in diverse settings.”

Kate H. Travis ’22, a March degree candidate who took time off during the pandemic, said she enjoyed the ceremony, though it differed from the pomp and circumstance of the University’s Commencement in May.

“It’s definitely not the same as the real graduation ceremony,” Travis said. “But I was glad that they had it, and it was good to hear the stories of people that have also taken time off.”

Hayato Shiotsu ’22 said he appreciated the gap semester he took due to setbacks caused by Covid but was “ready to head out.”

“It was nice that they talked about the benefits of straying off the set path,” Shiotsu said. “I hope that's something we can keep doing.”

“Whatever leaps you made during that time off have contributed to the version of you sitting here today,” Rivera said. “You learn even more from being away from Harvard, coming back to it with a new set of eyes and appreciation for it by adding to your own personal interpretive horizon.”