From Cannes: ‘Coupez !’ is a Hilariously Layered Love Letter to Filmmaking 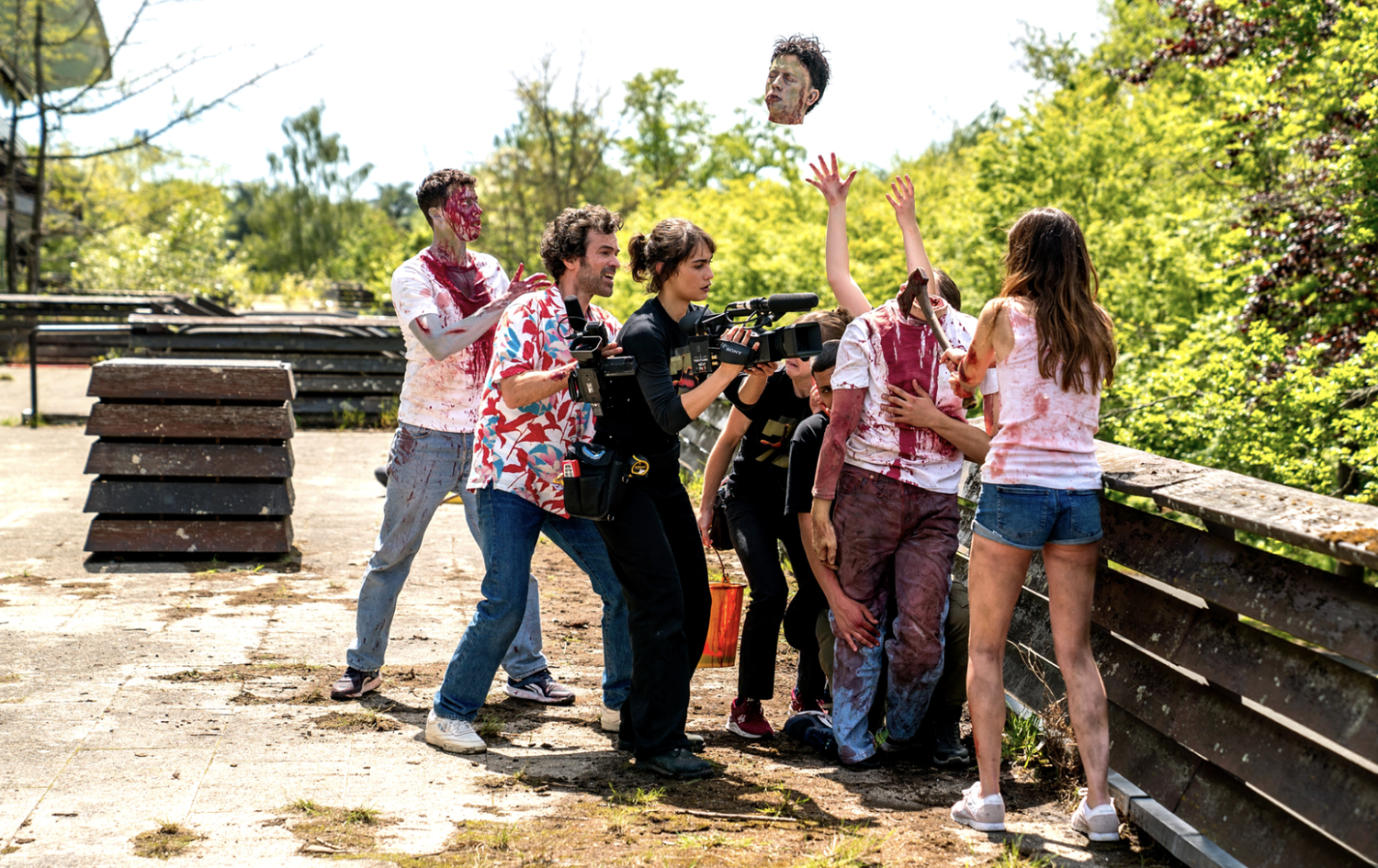 “Coupez !” (or “Final Cut”) opens on a color-drenched, grainy scene familiar to fans of low-budget horror flicks: A man (Finnegan Oldfield) covered in cheap blue body paint and fake blood staggers toward his horrified girlfriend (Matilda Anna Ingrid Lutz) as she realizes, with a cliché scream, that he’s transformed into a zombie. This melodramatic scene is then interrupted by a director (Romain Duris) yelling “Cut!” and bursting into the frame to berate his actors for their subpar performances, revealing the first of many layers to this unique film, which premiered on May 17 at the 2022 Cannes Film Festival.

“Coupez !,” directed by French filmmaker Michel Hazanavicius, is a remake of a 2017 Japanese film called “Don’t Stop the Take,” following the chaotic production of a meta-horror movie about a zombie-flick film crew attacked by real zombies. (Essentially, the film shows a movie within a movie within a movie.) Because of this complicated premise, the structure of “Coupez !” requires audiences to stick with its bizarre first act in order to fully understand its comedic goal — but the wait is well worth it.

The first half hour of the film is a shaky, strangely improvisational one-take horror movie (complete with opening and final credits) about a B-movie crew haunted by the living dead on the set of their film. “Coupez !” then dramatically shifts in tone and style, flashing back in time to show the making of this B-movie. Romain Duris stars as a down-on-his luck commercial director who agrees to remake a popular Japanese horror movie when he discovers that his daughter’s favorite actor — “the French Adam Driver” — is attached to star in it. What ensues is ultimately a hilarious, well-acted, and often touching ode to the painstaking labor and love that goes into filmmaking — a fitting opener for the 75th Festival de Cannes.

The first 30 minutes of “Coupez !” test the audience’s patience, but investing in this first act is integral to appreciating the incisive humor of its latter half. The supersaturated, low-budget zombie movie (called “Z”) shown in the film is a confusingly quirky but nevertheless entertaining portrayal of horror tropes, clearly self-aware of its allusions to classic B-movies. It follows an eccentric director who is so set on infusing authenticity into his film that he conjures a curse that brings real zombies to life.

Bizarre moments throughout “Z” make viewers scratch their heads: Why is the camera framing an empty hallway when the action is happening offscreen? Why does one character say he’s taking a cigarette break then promptly change his mind before reaching the door? When the credits roll on “Z,” viewers are left with countless questions. As the shaky camera and neon color grading are replaced by more fixed takes and a neutral color palette, “Coupez !” begins to answer these questions. It tells the chaotic and captivating story of how “Z” got made in the first place, from the initial pitch to casting, rehearsals, and the shoot.

On the day of filming “Z,” everything must run perfectly for a 30-minute, live-streamed single take — but everything that can go wrong does. In this part of “Coupez !” viewers are taken behind the scenes of the filmmaking process, and thus understand the strange moments of confusion from the first part of the film. The humor in this act is more than gratifying — it’s consistently laugh-out-loud funny. Actors are sick or drunk or missing, and the small crew runs around frantically in order to keep filming.

We realize the character who changed his mind about a cigarette break was really improvising as the crew wasn’t ready for his scene yet; the shot that showed an empty hallway was a result of the director of photography being stuck to a hook on a wall. The quintessential low-budget horror soundtrack is revealed to be composed by the upbeat musician Fatih (Jean-Pascal Zadi), who garners laughs every time he’s shown playing his cheesy synth chords. Beneath the slapstick humor is a tender tribute to the communal nature of filmmaking. Everyone from the director to the actors to the special effects team must step up to keep the production going; their dedication to the guerilla filmmaking process is inspiring to any artist.

As it delves into the fraught ups and downs of the filmmaking process, “Coupez !” subtly and poignantly explores the dynamics that govern movie sets of any size, from Remi’s battles with producers over creative control to his moments of casual racism regarding “Z”’s Japanese source material. Hazanavicius deftly illustrates how difficult it is to make a movie — even and especially on a microscopic budget, when it’s a grassroots effort instead of a juggernaut studio production. As Hanavicius shows, though, a small crew is not immune to the problems of racism and sexism that affect the broader film industry. When Remi makes racist comments toward the film’s Japanese producer Matsuda (Yoshiko Takehara), other characters are quick to critique him and he faces clear consequences.

In another understated but striking moment, the film’s cinematographer (Charlie Dupont) tells the female camera assistant Johanna (Luàna Bajrami) that she can’t hold the camera for the film, because “thirty minute one-takes aren’t for girls.” The cinematographer’s comment speaks to the sexist patterns and preconceptions that prevent women from achieving parity in the cinematography field, where only 8 percent of directors of photography are women. These elements added depth and realism to the movie’s portrayal of the trials of filmmaking, ensuring that it didn’t just valorize the director but instead dove into the social dynamics affecting the whole crew. In “Coupez !,” the joke is always on the people perpetuating antiquated ideas and behaviors.

The film also gains emotional resonance from the family drama underpinning its second half: Remi is motivated to take the less-than-ideal directing gig by his desire to reconnect with his daughter, aspiring director Romy (played by Michel Hazanavicius’s daughter, Simone Hazanavicius), whom he hopes to impress. When one of “Z”’s main actresses gets in a car accident, Remi brings in his wife, the retired actress Nadia (played by Bérénice Bejo, who is married to the real director Hazanvicius), to replace her. He makes the film a true family affair. This domestic subplot gives an emotional core to the film. It shows how the family’s shared creativity and passion for filmmaking brings them together, gives Remi fulfillment in his stunted career, and makes their work better. Their family dynamics are grounded by moving performances from Duris, Bejo, and Hazanavicius, and the naturalistic writing of the second and third act.

Though the first act may throw audiences for a loop, “Coupez !” is more than worthwhile to see through — it’s a moving, creative, and witty story of how a family becomes a film crew, and a film crew becomes a family.