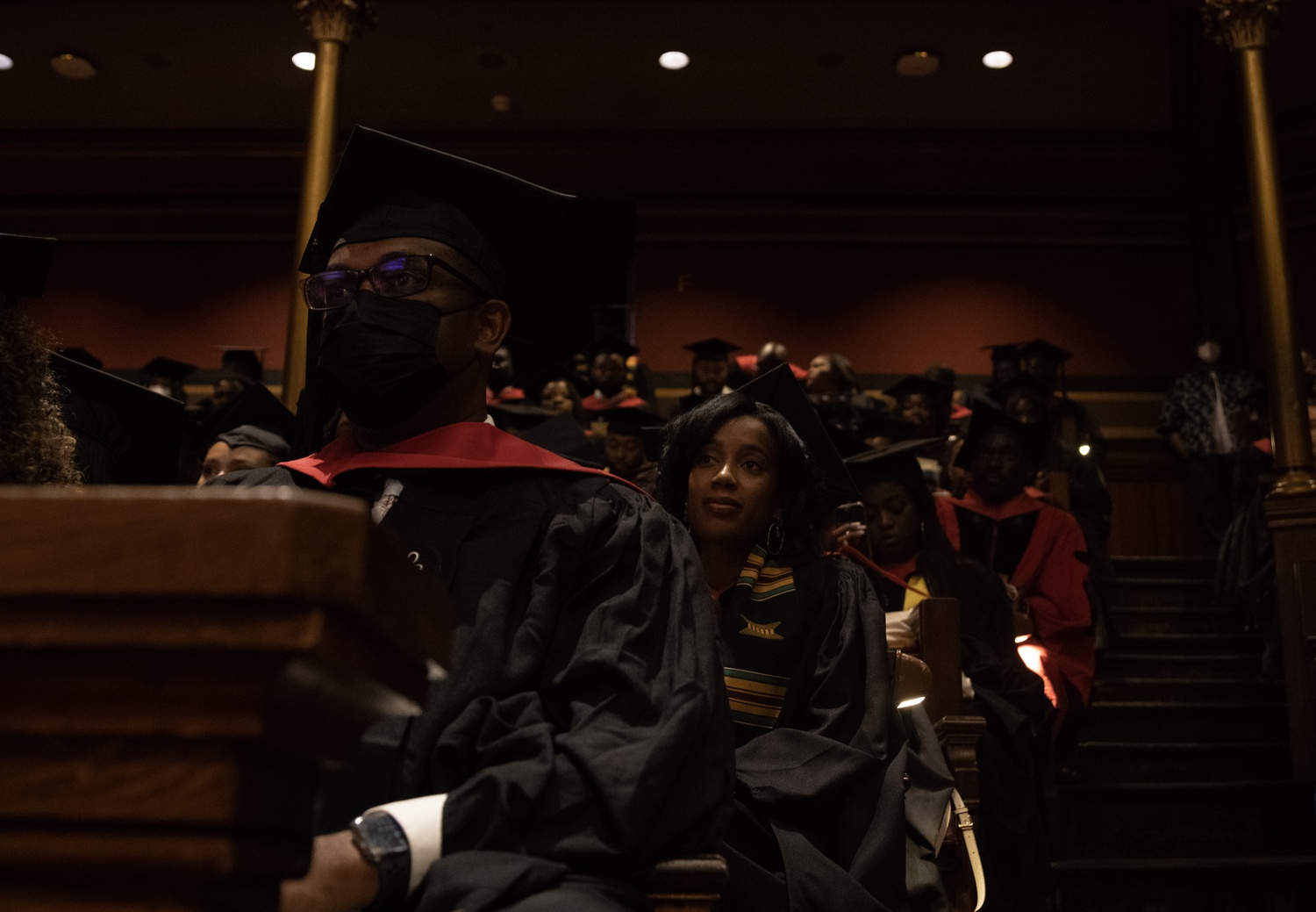 Students from across the University celebrated in the fifth annual Black Graduation ceremony. By Cara J. Chang
By Meimei Xu, Crimson Staff Writer

With staff support from Harvard’s Office of Equity, Diversity, Inclusion, and Belonging, affinity student groups hosted ceremonies for graduates from first-generation, BGLTQ, Black, and Latinx backgrounds on Tuesday ahead of the University’s first in-person Commencement ceremony in three years Thursday. A ceremony for Asian-American, Pacific Islander, and Desi-American graduates occurred Monday, and one for Native-American graduates occurred Thursday.

In her speech, Nguyên recounted anecdotes about her time at the nail salon where her mother worked, comparing the application of nail polish to the collection of new experiences and adventures throughout college. She encouraged graduates to connect with people from different backgrounds and come together to combat inequality.

“Let us paint lines so thick that there is no room for injustice or hatred to spew in,” she said. “Let us use so many sparkles and bedazzles that we are emboldened to make change.”

“They basically took us to church,” said Chidi D. Akusobi, who received an M.D.-Ph.D. from Harvard Medical School.

Following a rendition of “Lift Every Voice and Sing” by HGSE graduate Gabriel O. Montague, Law School graduate Courtney J. Brunson delivered the student speech, highlighting moments in history in which individuals precipitated a major change throughout the country. She pointed to the efforts of small groups of parents whose advocacy for the desegregation of schools culminated in Brown vs. Board of Education, the Supreme Court case that ended racial segregation in public schools.

Brunson called upon the graduates to focus on making an impact in the lives of people they interact with every day.

“I encourage you to not, upon graduating from Harvard, set out to change the world,” she said. “Rather, I ask that you improve the lives of the people right next to you. Many of your patients, constituents, and clients will be better off because you dedicate your moments to improving their circumstances and bettering their outcomes.”

The ceremony also featured speeches from Harvard Kennedy School professor Cornell William Brooks, who received a faculty award for diversity, equity, and inclusion during the ceremony. LaTosha Brown, a 2o19 HKS Institute of Politics fellow and the co-founder of the civic engagement organization Black Voters Matter Fund, served as the keynote speaker.

Brown urged the graduates to recognize the opportunities created by generations of Black trailblazers throughout history.

“There were many firsts that laid the path, created the foundation, opened up the way for us to get here, for us to be here,” she said. “There was a sister that was scrubbing a washboard so that her child could have her child that one day could come to Harvard.”

Akusobi said he appreciated the chance for celebration between people from the University’s different schools.

“We’re all so siloed,” Akusobi said. “Events like these are really great reminders of we are part of larger communities — that we’re not only alone, and that when we are together there is this sense of joy and purpose and responsibility and happiness.”

After attendees filed out of Sanders Theatre, a second wave of families, students, and friends filled the wood-paneled auditorium for the Latinx Graduation ceremony that evening. 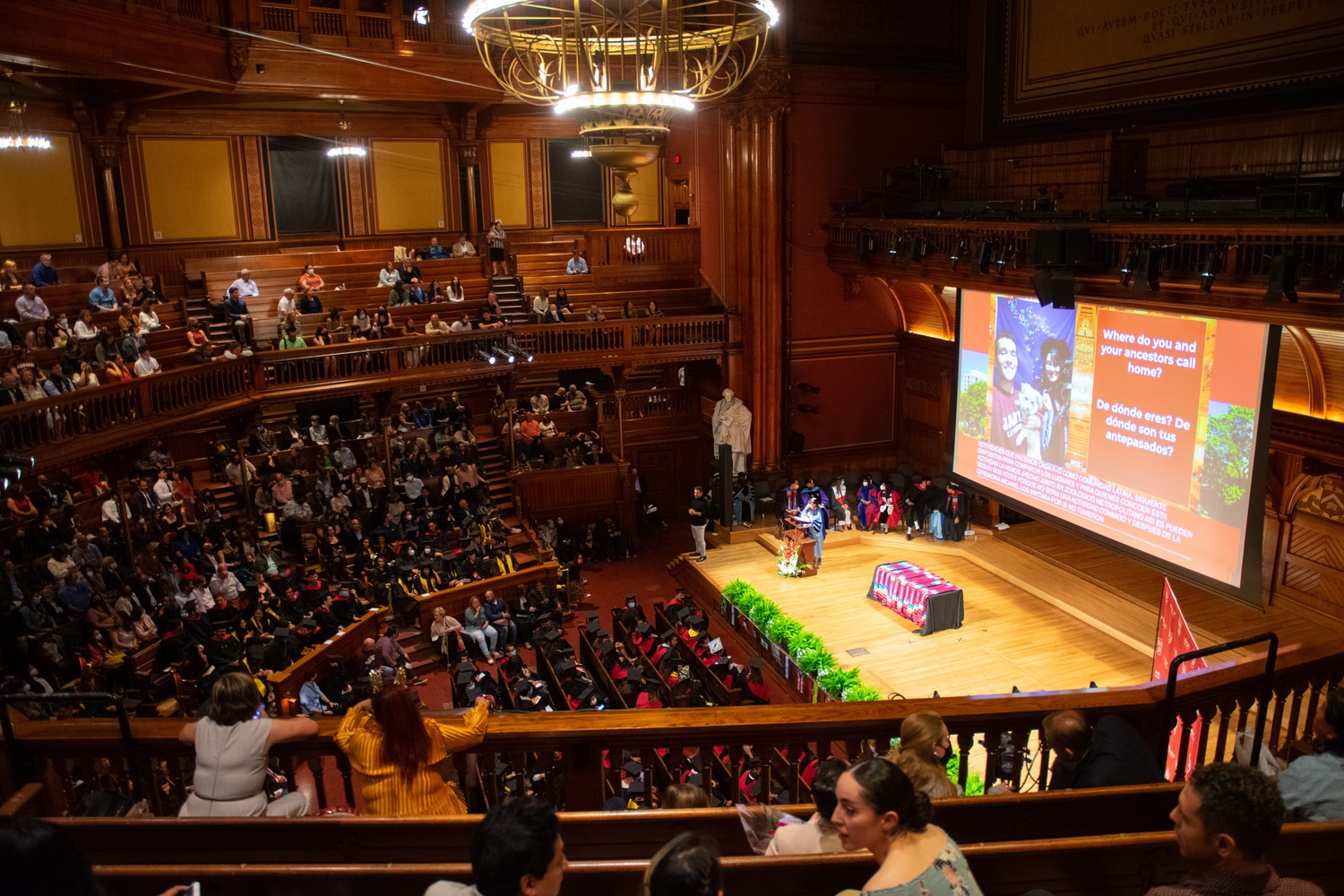 An affinity graduation ceremony for LatinX students was held in Sanders Theatre on Thursday. By Julian J. Giordano

Faculty speaker Christina Shiao-Mei “V” Villarreal, a lecturer at the Graduate School of Education, thanked the families present for the role they played in supporting their graduates’ education.

“So many of you crossed borders, you left your homelands, you sacrificed your time, your own well-being to ensure that these graduates could be here one day to walk this stage at Harvard,” she said.