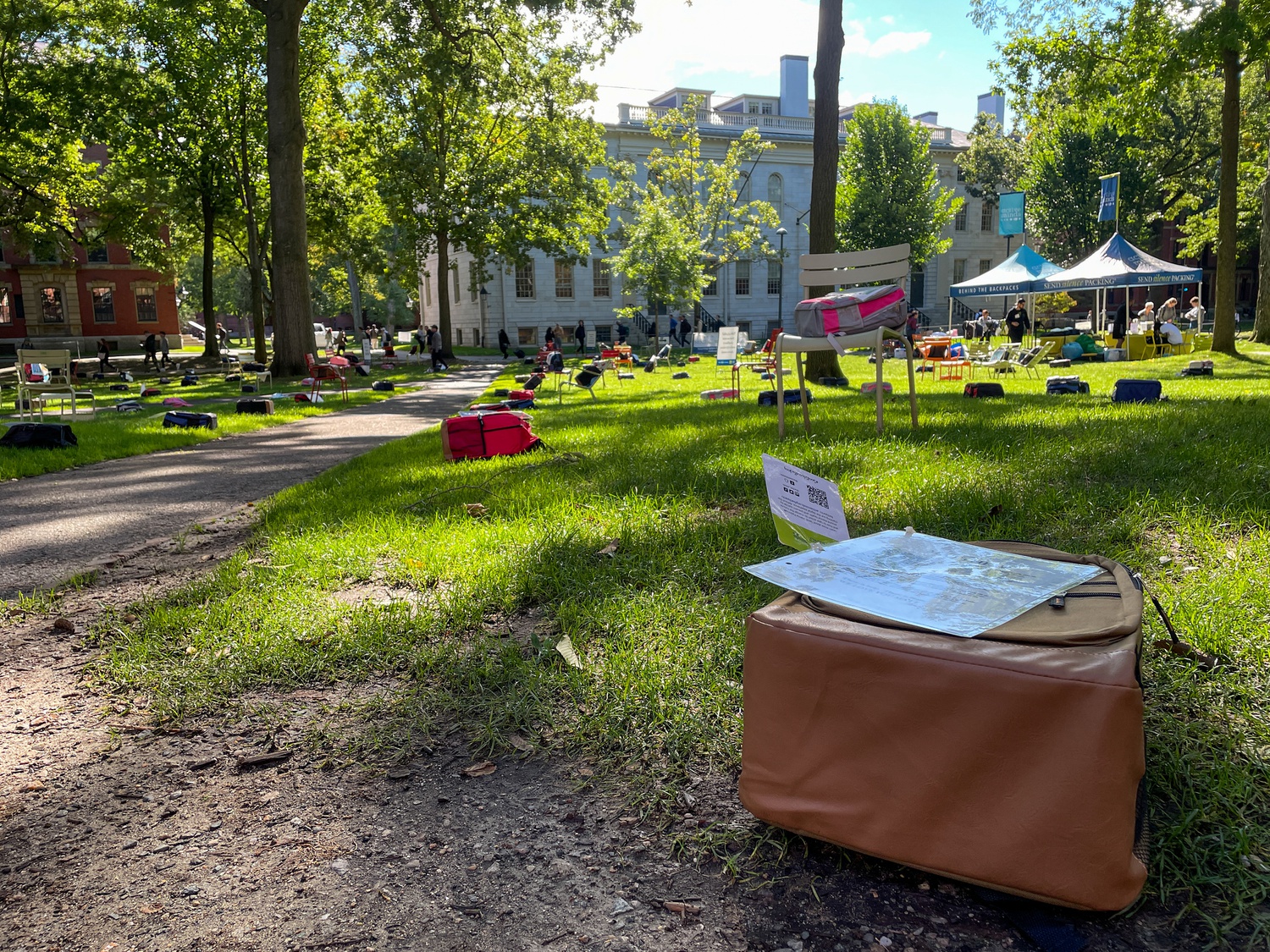 Roughly 1,000 backpacks symbolizing the annual toll of college student suicide in the United States were spread throughout Harvard Yard on Friday in a display seeking to raise awareness about student mental health.

The display, called “Send Silence Packing,” was put together by the Harvard chapter of Active Minds, an organization focused on addressing the mental health struggles of young adults. It was the second year in a row the group organized the display in Harvard Yard.

The backpacks, some of which belonged to students who died by suicide, were donated by people who have lost loved ones. Many backpacks were accompanied by a laminated sheet of paper telling the story of the student who once wore it.

The display was first put on by an Active Minds chapter in Washington, D.C., in 2008. Since then, “Send Silence Packing” has been shown more than 200 times, reaching over 1 million visitors.

“We’re just trying to provide support for individuals on many levels,” said Kathryn S. Boit ’23, co-president of the Harvard chapter of Active Minds.

Members of the organization were positioned throughout the Yard on Friday to answer questions from passersby and provide resources if necessary. Several clinicians from Harvard University Health Services’ Counseling and Mental Health Services also staffed the event.

“I’m really struck by how honest and vulnerable the conversations are with people who are visiting the display,” Boit said. “Nobody’s immune to suicidal thoughts or behavior, and it’s just something that hits home for me.”

Planning for the event started in March, Boit said.

Michelle Y. Canas-Garcia ’26, who passed through the Yard while the display was up, said she thought the demonstration was an important way to raise awareness for suicide prevention.

“It’s a little less triggering than fully speaking on it because it’s almost like you’re reading it, and you’re kind of able to differentiate yourself and empathize more,” Canas-Garcia said of the display. 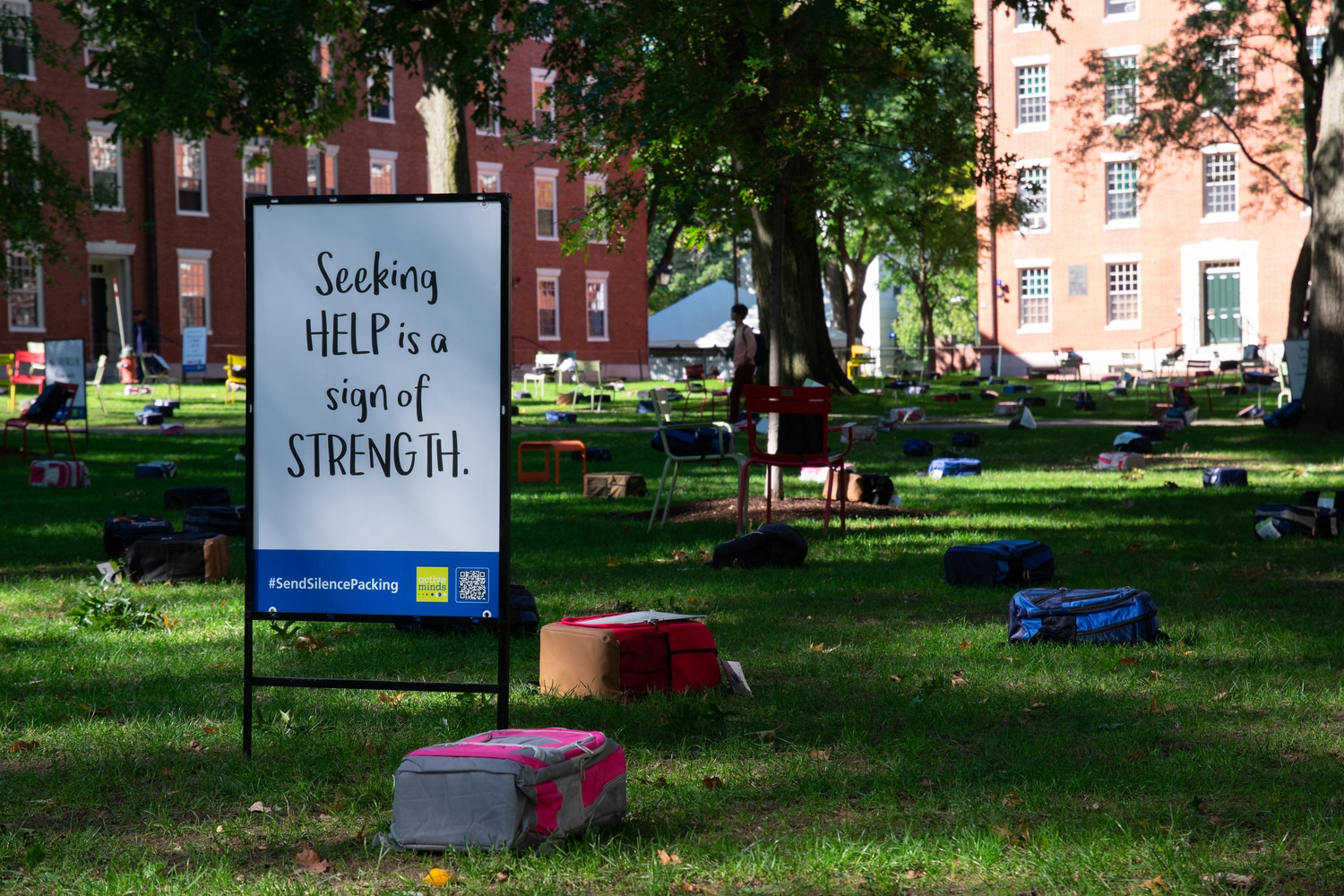 The backpacks displayed in Harvard Yard on Friday included some that belonged to students who died by suicide. By Julian J. Giordano

Claire Yang ’26, who perused the exhibit on Friday afternoon, said the display was “very moving.”

“I really appreciate that people put together the time to organize something like this,” she said. “As someone who has had friends that struggled with mental health and depression, I think it’s something very important that should be talked about.”

Santiago Salazar ’26, an Active Minds member who worked a shift in the Yard on Friday, said the display created a sense of solidarity around an important topic.

“The most important part of this display is knowing that you are not alone in case you need to reach out for help,” Salazar said.

Boit said she hoped the event would help encourage students to point their friends toward getting help when they need it.

Brammy Rajakumar ’23, co-president of Active Minds, said it is important to have open discussions about mental health at Harvard given the high-pressure environment at the school, adding that it can be challenging for students to give themselves a break.

“There’s a range of needs,” she said. “These all deserve to be met, and they all deserve access to resources.”