'Darkness on the Edge of Town': The Sound of Authenticity 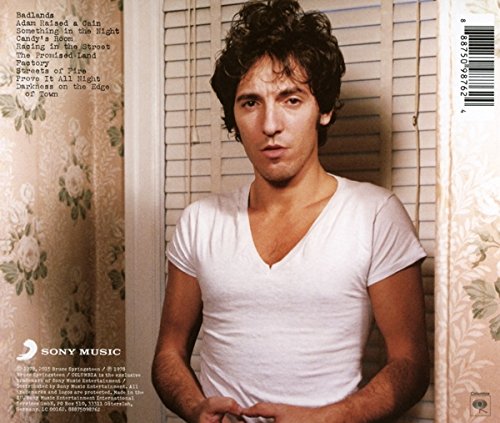 Back album cover of "Darkness on the Edge of Town." By Courtesy of Frank Stefanko
By Trevor J. Levin and Edward M. Litwin, Crimson Staff Writers

In 2006, The Killers were mad. They were fresh off touring in support of their debut album, “Hot Fuss,” and everyone still thought they were British. They decided that they needed to show how American they were in their next album. To show off their roots, The Killers wrote an album designed to emulate a certain sound—Bruce Springsteen’s “Darkness on the Edge of Town.”

In the 1970s, Springsteen was a star on the rise. While his first two albums weren’t hits, Springsteen’s reputation was stellar. Not only did critics embrace him, but celebrities like David Bowie did as well. More than anything else, Springsteen’s early music could be characterized by a love of New Jersey and an embrace of the downtrodden there. With his third album, the breakout hit “Born to Run,” Springsteen outgrew his hometown of Asbury Park in an instant. “Born to Run” was a masterful album that loved its subjects just as much as it pitied them. It reshaped the face of rock music, creating the heartland rock genre.

But before Springsteen could continue his success, he became embroiled in a lawsuit against Mike Appel, his former manager, who had signed him to an unfair contract. By the time the legal battle had ended, the musical landscape had changed entirely. With punk ascending, songs had shrunk in length and in narrative ambition. And Springsteen wasn’t special anymore either. Other musicians had bought into “Born to Run”’s vision and the radio was flooded with artists like Bob Seger and Tom Petty. But when Springsteen came back, he changed the narrative entirely—again.

The recording process for “Darkness on the Edge of Town” was intense and the process of cutting the 70 songs Springsteen wrote down to a more reasonable amount proved challenging, but the net result was worth the effort. “Darkness on the Edge of Town” is not a happy album. Gone are the big solos and the empowering stories of hope and success against all odds. All that’s left is a building sense of desolation. Failed by their country, the subjects of “Darkness” are in dead-end lives. Their drives to escape their woes at the beginning of each side of the album quickly change to emptiness and abandonment. This is signified not only lyrically, but also by a much tighter structure than Springsteen had ever used. Gone is the jamming on “Born to Run” and “The Wild, the Innocent.” What remains is a concise set of songs reaching in and drawing on these feelings of abandonment.

Springsteen was a master of character creation—maybe even more so than his primary influence, Bob Dylan. While we might see (or wish to see) certain angles of ourselves in the addled, self-hating, or misadventuring lovers or poetic heroes that populated Dylan’s fantastical classics, Springsteen’s protagonists appear in flesh and blood—ordinary people, overflowing with passions, crippled by fear, sometimes driven by desperation to do extraordinary things. Not until “Darkness” did he fully realize this vision, stripping away the romantic optimism and widening his scope to an ambitious, universalist portrait of America. “Darkness” includes snapshots from New Jersey to Nevada to Kentucky, and seems to reflect the whole country, creating an inescapable sense of desperation and desolation.

Repeating a trick from “Born to Run,” Springsteen magnifies the fall from hope with brilliant sequencing. Each side of the record begins with a burst of (relative) optimism: Tom-tom fills kick off the upbeat anthemic classics “Badlands” and “The Promised Land.” But both halves get slower and darker in parallel until their devastating finales, “Racing in the Street” and “Darkness on the Edge of Town.” The title track revisits the characters in “Racing,” seemingly after years of heartbreak and disillusionment. It’s bleak enough that they risked their lives for the adrenaline rush—just to escape relationship trouble or to avoid the fate of the guys who “just give up living / And start dying little by little, piece by piece.” By the finale, they’ve learned that the solution was painfully temporary.

Despite the pessimism, the tightness and the universality of “Darkness” make it an accessible album. Even though the album didn’t have a real hit, its legacy and influence only grew over time. “Darkness” perfected the heartland rock genre—a genre meant to embrace working class American life through its depiction of such a life as joyless and cursed. The “Darkness on the Edge of Town” era was when Springsteen reached his creative and vocal zenith. His writing was succinct and his voice took on a rugged, haunted quality that sounded both impossibly human and otherworldly. His energy at the time was inexhaustible. It was in this period that the mythology of Springsteen came into its own.

Today, Springsteen codes for many things: masculinity, classic rock, and working class American life, all of which are rooted in “Darkness on the Edge of Town.” Nowadays, when artists like The Killers, Counting Crows, Arcade Fire, Japandroids, and even Ed Sheeran want to play up their roots, they borrow heavily from the sweeping, urgent sound Springsteen crafted on “Darkness” to show who they “really are.” It’s ironic to the point of absurdity that the defining sound of authenticity since the ’90s comes from a man who wrote an album about mostly fictional characters.

In many ways, “Darkness on the Edge of Town” is Springsteen’s most powerful album. Beyond the bleakness, “Darkness” signaled a vulnerability that brought people in and made them care. This connection prepared Springsteen for subsequent forays into bigger and brighter pop, but it also helped cement his legacy as the symbol of the American working class. Springsteen appeared to speak for all the disenfranchised and the downtrodden, memorializing their lives in his music.

That’s precisely what The Killers had in mind when they recorded their follow-up album. “Sam’s Town” proved that The Killers were American. Simultaneously, it demonstrated that the best way to tell the world who you are is by ripping off “Darkness on the Edge of Town.”

—Staff writers Edward M. Litwin's and Trevor J. Levin's column, "Sound and Vision," evaluates the cultural legacy of the late 1970s, one album at a time.