War of the Words

The politics and power struggles of language preservation 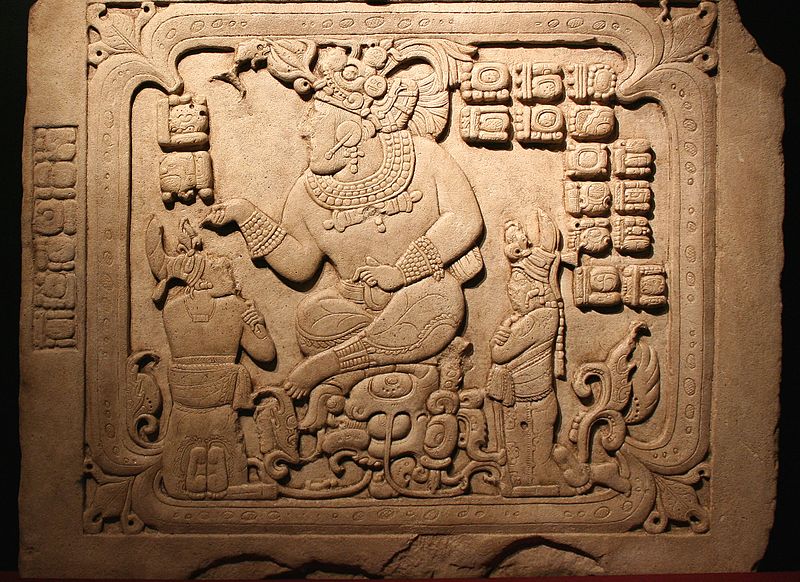 Panel from the Mayan city of Cancuén, which includes an example of ancient Maya script.
By Matthew J. Watson, Crimson Staff Writer

This past April, Daniel Pedro Mateo went missing from the small Guatemalan village of El Quetzal. His kidnappers demanded a ransom of 150,000 quetzals, about $19,000, from Mateo’s family. Nine days later, his mangled body was found near his home village of Santa Eulalia.

Mateo was an outspoken activist on behalf of his native Q’anjob’al people, a Maya group that lives in western Guatemala. In addition to campaigning against various acts of what activists termed environmental exploitation—such as a massive dam that would have displaced numerous Maya people from their homeland—Mateo’s activism also extended to preserving his native tongue. He was one of the founders of Snuq Jolom Konob, a bilingual radio station with broadcasts in both Spanish and Q’anjob’al—a subversive act in a country where indigenous languages are said to represent a threat to the hegemony of the hispanohablante.

For Annie Gagliardi, a postdoctoral fellow in Harvard’s Linguistics Department, Mateo’s death hit close to home. Much of her work focuses on languages of the Caucasus and Guatemala, and she had previously done research in Guatemala with Mateo's cousin, another linguistics postdoc at Harvard. Mateo was murdered a few weeks before Gagliardi was scheduled to return to Guatemala and meet him. “It’s a frightening pattern,” Gagliardi says. “Here are these languages you care about, these communities you care about, and the people fighting for them—they’re targets.”

For speakers of minority languages like Q’anjob’al, their language isn’t just a means of communication, but also a way to preserve their culture. For Gagliardi and other linguists at Harvard and beyond, these languages provide critical insight into the nature of language itself. Studying minority languages validates their existence, scholars say, and speaking them represents a defiant continuance of their speakers’ oral and written traditions and the unique worldview that these languages express.

Mateo’s story is just one of many in the region’s long string of violence toward cultural activists. While it is unknown why Mateo was murdered and what role his efforts to revitalize Q’anjob’al may have played, his story still speaks to the political potency minority languages can have. Speaking such languages is often an act of resistance in and of itself, and official efforts by governments and majority groups to discourage or prohibit their use is a testament to the role these languages play as strongholds against assimilation.

According to Erin D. Boon, a graduate student in the Celtic Languages and Literatures Department, Welsh is another language whose current precarious situation has much to do with politics. Welsh’s decline, Boon says had much to do with institutionalized efforts to shame its speakers. “Kids wore ‘Welsh nots’—if you were caught speaking Welsh, you had to wear this around your neck,” Boon says. The “nots,” wooden pendants often with the letters “WN” carved into them, were passed on when another student spoke Welsh; at the end of the day, the student wearing the “not” was beaten. Welsh posed a problem for proponents of Britain’s homogenization not just because they couldn’t understand the language—the simple act of speaking a non-majority language represented a rejection of English rule.

In the extreme, says Alexandre A. Tokovinine, languages have been removed from any literal meaning and repurposed to serve purely symbolic ends. Tokovinine, a lecturer in Harvard’s Anthropology Department who focuses on classic Mesoamerican languages and civilizations, teaches the undergraduate course “Anthropology 1170: Mesoamerican Writing Systems,” and he has also conducted research on the history of Mayan languages and their contemporary descendants. The ancient Mayan writing system, which comprises hundreds of hieroglyphs, has fallen out of practical use today largely due to displacement by Latin-based scripts at the hands of colonists. But classic Maya script has taken on new significance—present-day Maya cultural activists emblazon the hieroglyphs onto books and signs. These characters, Tokovinine says, serve not to convey any literal meaning but rather to symbolically subvert prevailing stereotypes of Maya people as dumb, cultureless savages. “They use [the hieroglyphs] as a symbol of this broad indigenous tradition that in many ways equals or eclipses Spanish medieval traditions,” Tokovinine says.

The political dimension of Maya script is nothing new. Five hundred years ago, according to Tokovinine, the Mayan hieroglyphic writing system posed a serious challenge to Spanish officials seeking to impose a colonial order. The script played a vital role in the rituals and transference of the Mayan religious tradition—so in 1562, Bishop Diego de Landa Calderón burned over 40 Maya codices and spearheaded attempts to render the Mayan script using the Roman alphabet. “[The Spaniards] singled out writing as a tradition they had to eliminate because it was the main obstacle to converting natives to Christianity,” Tokovinine says. “It wasn’t enough to target the priesthood—they also had to target the books.”

To native speakers, minority languages represent a powerful tool of social protest. To linguists at Harvard, they represent an invaluable resource that can provide groundbreaking insight into how languages work. As professor of linguistics Maria Polinsky puts it, “Every language gives you something to test and to challenge your theory.”

Linguists’ approach is inductive rather than deductive—that is, they derive theories about what language is and how it works based on findings that are universally applicable. “[Linguists] have to whittle it down to what languages have in common to know what language is,” Boon says. If even a single language doesn’t fit with their theories, it’s a problem with the theory, not the language.

Research on minority languages benefits speakers as well as researchers. In addition to spending time in Guatemala, Gagliardi has conducted field research on Tsez, a language spoken by about 13,000 people in a conflict-torn area of the Caucasus Mountains. Though the communities in which Tsez is spoken are frequently remote and isolated mountain villages, Gagliardi has been met with warmth rather than suspicion. “It made [Tsez people] feel good that an American would go all the way there just to study their language,” she says.

Enthusiasm for Gagliardi’s research has meant a surplus of data from her experiments. “I’ve already learned about the language beforehand and designed an experiment—really, all I actually need from the participants is that they participate in my task and behave however they behave,” Gagliardi says. “But people, even adults, want to talk about their language, they want to talk to you about their sentences, and they get really interested in it—I think because you’re interested in it.”

This willingness to open up makes sense coming from communities whose language is constantly jeopardized by the encroachment of more widely spoken languages—in Tsez’s case, Russian and Avar. “By coming into these small communities and doing research on any aspect of that language, you’re essentially validating the importance of that language and giving speakers some external sign of approval,” Polinsky says. “And very often, they don’t get this validation from neighboring communities, especially in places like Guatemala and the Caucasus.”

Furthermore, minority status itself can have an influence on a language’s syntax and vocabulary, which is a point of interest for many linguists. “If you’re in a small community where everybody knows everybody, I don’t have to refer to things by name—I can refer to he, she, or it,” Polinsky says. “You find that sometimes simple things…are expressed very differently because of the tight-knit culture.”

Polinsky’s point is borne out by the experiences of Kenard G. Dillon ’17, who grew up on a Navajo reservation in Arizona. His grandfather was a World War II Navajo code talker, and though his parents do not know the language, he took it up during his primary education. He found that Navajo's geographic isolation meant that it lacked the vocabulary to describe the new ideas and technologies brought by globalization. “Because [Navajo] were all so confined to this one little corner of the southwest, we didn’t know what an ocean was, or what a whale was,” he says. Instead of wholesale borrowing of words from English to describe these new things, Navajo instead uses metaphors that reimagine everyday objects. “The word for octopus is ‘eight-arms,’ and a whale is just ‘big fish,’” Dillon says. “The word for metal is ‘besh,’ so technology is just ‘besh so-and-so’—phone is ‘metal that talks’ and a computer is ‘metal that thinks.’”

When a language dies, linguists say, it diminishes the potential for these kinds of insights, whether linguistic or cultural. “For a linguist, you lose a particular system that’s as complex as the next one,” Polinsky says. “And all that ambient culture that language creates will also get lost.”

Despite their precarious political position, many endangered languages are being preserved and even revived thanks to both their continual study by outside researchers and successful activism by native speakers.

Welsh is somewhat of a poster child for successful language revitalization. It’s currently spoken by about 20 percent of the population of Wales. While still a relatively small proportion, the modest growth experienced in the 21st century represents the halt of a long decline, with the percentage of Welsh speakers in Wales bottoming out in 1991 at 18.7 percent according to census data. The days of the Welsh not are over, and the Welsh language is a strong source of pride for its speakers.

But the survival of a language cannot be taken for granted—education and language transference must continue to occur if a language has any hope of survival. “One of the most effective ways of killing a language is to stop transmitting it to children,” Polinsky says.

This lack of transmission was an issue for Navajo—in the mid-1900s, students like Dillon's grandparents were discouraged from both speaking their native tongue in school and passing it on to their future children. “My grandparents on my mom’s side both went to boarding school,” Dillon says. “Boarding school meant to Americanize Native Americans—the way the language was approached was, ‘You need to speak English, and when you start families, you’re not going to teach your kids this language, because this language isn’t American.’”

However, the use of Navajo code-talkers in World War II—considered integral to the Allies’ success—renewed interest in teaching and speaking the language. Even so, Dillon’s mother, like many in her generation, does not speak any Navajo at all. It’s standard for students on the Navajo reservation to take classes in the language, but Dillon says its teaching is hampered by inconsistent curricula as well as what he describes as Arizona’s fiercely conservative political environment.

“The law says that we can’t instruct students in any language other than English,” Dillon says. “So to get past that, tribes have to classify their own languages as foreign languages so that they’re able to teach it legally.”

At the end of our interview, Dillon introduces himself to me once again, this time in Navajo. As he speaks, my Anglophone ears pick up the breathiness of French, the musicality of Mandarin, and the cadence of Arabic—but the content of what he says is uniquely Navajo.

This is the standard Navajo introduction, according to Dillon, akin to the way you’d introduce yourself in English to an audience or a formal group. Dillon’s introduction illustrates the particular importance of family and history to the Navajo people. For Dillon and other speakers of minority languages, their native tongues are just as much a part of this history as the words they speak.

—Staff writer Matthew J. Watson can be reached at matthew.watson@thecrimson.com.