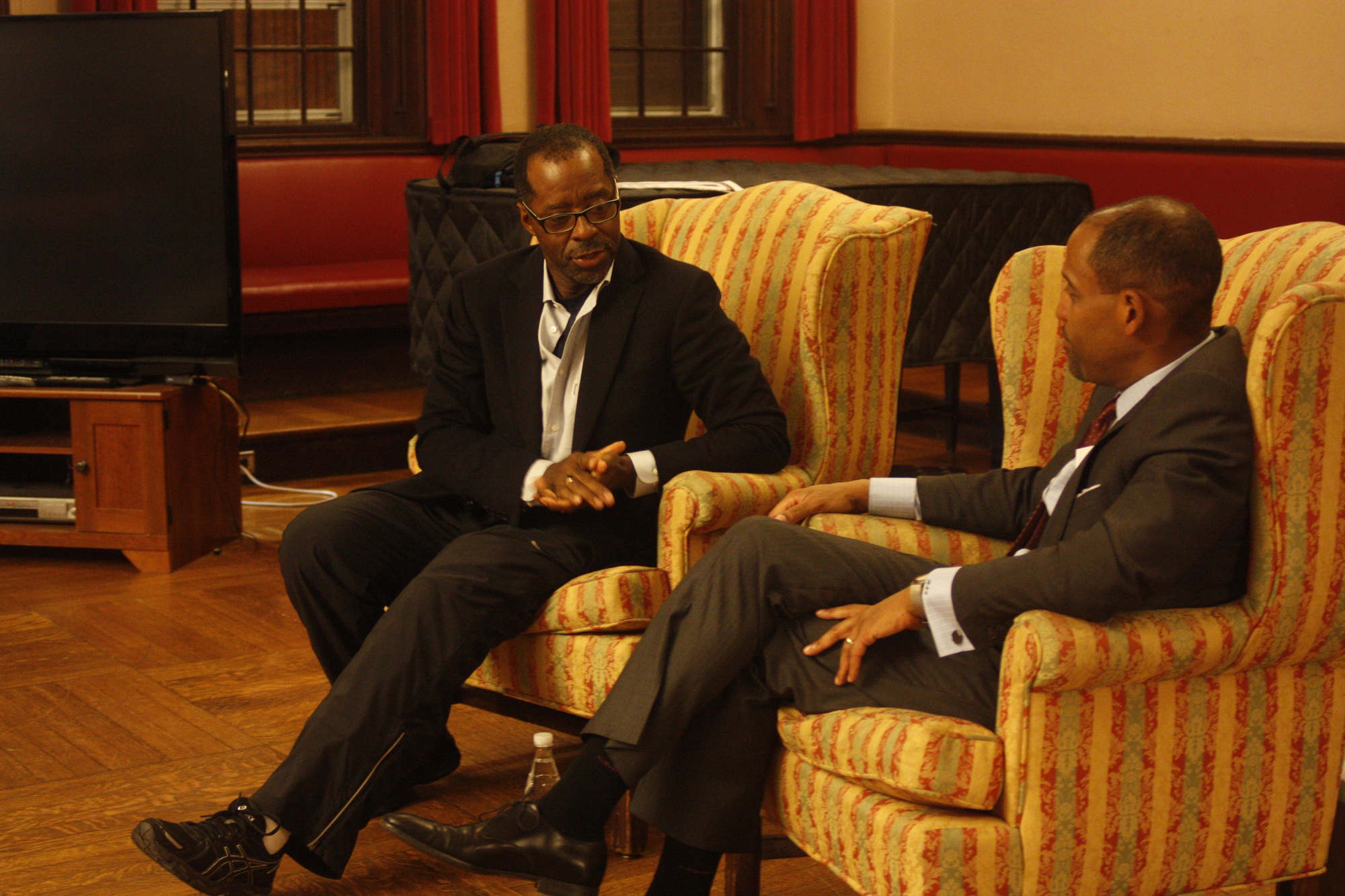 Tony Award-winning actor Courtney B. Vance ’82 revealed on Wednesday that he wasn’t always certain of his career path. Vance spoke frankly at an intimate lecture in Winthrop House’s Junior Common Room as part of the Perini-Woods Memorial SCR Speaker Series. In a talk entitled “From Harvard to Hollywood,” Vance retraced his career trajectory to roles in “The Preacher’s Wife” and as Assistant District Attorney Ron Carver on the TV series “Law and Order: Criminal Intent.”

“When I arrived, everyone else knew what they wanted to do, and I felt completely alone and incompetent,” Vance said of his freshman year at Harvard. “It was a really rough first semester because I was running track and not enjoying it.”

It wasn’t until his sophomore year that Vance decided to give acting a try.  “At first it was just a way to meet new people,” he said. “After my fifth show my family said, ‘you might want to consider this as a career.’” Vance starred in the 1980 Harvard-Radcliffe Drama Club production, “Spring’s Awakening,” as the Man in the Mask. In an interview with The Crimson, Vance said he remembers forgetting his lines at one point during the show. “I don’t remember anything about the character…. We were talking about something, and I went blank. I mean, I dried up like Arizona.”

Despite this momentary lapse in memory, Vance’s performance was well received. During his time at Harvard, Vance appeared in a number of shows, including the 1981 production of “Doctor Faustus” and the 1980 adaptation of “Story Theatre.” He continued to pursue theater seriously in the Boston area while in college as an actor for the Boston Shakespeare Company. After graduating Harvard, Vance studied at the Yale School of Drama, where he earned a Master of Fine Arts.Vance has since played many historically important African American characters, including Corey in “Fences,” Jim in “The Adventures of Huck Finn,” and a lieutenant in the movie “The Tuskegee Airmen.”  He says he intentionally sought out the role of Jim to dispel doubt of his ability to convincingly portray an uneducated character given his Harvard background. Vance also appeared in the film “The Hunt for Red October.”

Vance’s 1996 performance as the leader of a struggling Baptist church in New York City in “The Preacher’s Wife,” opposite Whitney Houston and Denzel Washington, was a memorable experience for him. Vance says that witnessing Houston’s deterioration and struggle with substance abuse was extremely painful. “She had the voice of an angel and [was] the voice of a generation,” Vance says. Speaking of the media coverage of celebrities, he says, “the tragedy for artists is losing your private life.”

This year, Vance received a Tony Award for his work as “Hap” Hairston in “Lucky Guy,” a drama about journalist Mike McAlary, played by Tom Hanks. Vance’s success in the role was the surprising result of a professional gamble: his decision to return to Broadway after being away from it for over two decades. “It was nothing short of miraculous,” Vance says. “[My wife] Angela said, ‘you’re not going to make any money doing this,’ and it was a major family decision that involved moving to New York for six months,” Vance says. After the talk, a student actor in the audience asked Vance for his advice on training for an acting career. “In theater, you have to go back to kindergarden. Acting is problem solving,” Vance said, referring to the actor’s need to develop his or her techniques and continually  refine the basics of the craft. He encouraged audience members to seek inspiration in their daily life. “Life happens on the way to the theater—you have to use that.”