A Harvard committee's decision recommending a ban on membership in social groups was far from unanimous. 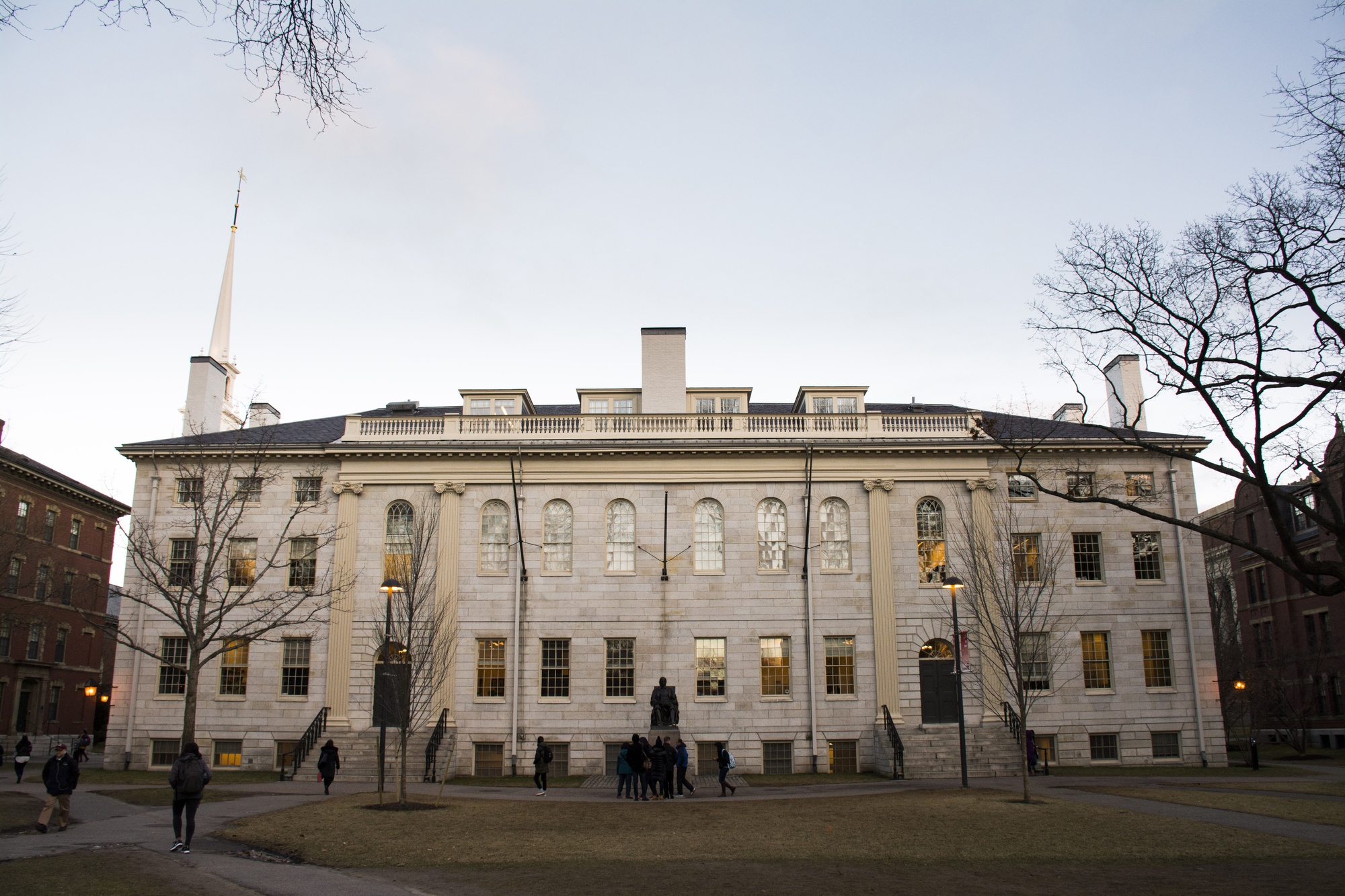 University Hall houses many administrative offices of the Faculty of Arts and Sciences. By Charles K. Michael

A Harvard committee's decision recommending a ban on membership in social groups was far from unanimous.
By Hannah Natanson and Derek G. Xiao

Editor's Note: In its final report issued Sept. 2017, roughly two months after the publication of this article, the faculty committee watered down its proposed social group ban, instead suggesting Harvard consider the ban as one of multiple ways to reshape the school's social scene. Committee members admitted in the final report that "we did not reach consensus about the path forward."

At 9 a.m. on Friday, May 12, a handful of students, faculty, and administrators filed into the cream-colored McFadden Room in the basement of the Barker Center to vote on the future of undergraduate social life at Harvard.

One option read simply: “Do something else?”

The most severe option, barring student membership in “fraternities, sororities, and similar organizations,” would eventually become the committee’s official recommendation and the capstone of Harvard administrators’ year-long effort to curtail the influence of the groups. The faculty committee’s work was intended to incorporate the views of students and professors, who argued they had not been properly consulted on the formulation of Harvard’s original policy.

In its 22-page report, released July 12, the committee indicated that students and faculty had finally had their say — only a “small minority” of committee members heavily disputed the proposed social group ban, according to the document.

According to documents reviewed by The Crimson, the decision to outlaw membership in social groups at Harvard — some over two centuries old — received only seven votes from the 27-person committee.

By contrast, two other options — one suggesting a new committee to oversee the social groups, another proposing a ban of all organizations that discriminate on the basis of sex, race, or socioeconomic status — gained 12 and 11 votes, respectively. Not every member of the committee was present at the vote.

The committee never conducted another vote after May 12. At the body’s last meeting 14 days later, the decision to ban membership in the groups had become a fait accompli: Committee members spent most of the meeting debating the finer points of the proposed social group prohibition, according to two members of the committee. No student members were in attendance.

This account of the faculty committee’s deliberations is based on interviews with four members of the committee — granted anonymity to discuss confidential proceedings — and on internal committee documents and correspondence obtained by The Crimson. They paint a portrait of a process the members say was marked by confusion, disagreement, and opacity, resulting in a report that did not necessarily capture the full committee’s views.

Dean of the College Rakesh Khurana and music professor Suzannah E. Clark, who co-chaired the committee, declined to comment for this article through spokesperson Rachael Dane.

“The co-chairs of the USGSO Faculty Committee decline to comment on the leaked information provided to the Harvard Crimson, citing the need to uphold the important confidential nature of the faculty committee process,” Dane wrote in an emailed statement.

‘A STATE OF UNCERTAINTY’

Long before the vote, committee members had spent months debating the path forward for Harvard social groups, meeting quietly — usually on Friday mornings — in different buildings across campus. The committee took precautions to keep its deliberations private: no phones were allowed in the meetings, and members received instructions not to speak with the press, except to describe their own comments.

Over the course of the semester and into the beginning of the summer, the committee reviewed a variety of materials and invited a host of different guests to speak at meetings, according to internal committee correspondence obtained by The Crimson.

Once, Clark asked that members read a Crimson article detailing how members of the all-male Delphic Club hired strippers for a 2010 punch event.

During at least two meetings, the committee planned to host guest speakers, including professors and “representatives from clubs.” Committee members invited Lewis and Engell to answer prepared questions at the April 28 meeting from 9:45 a.m. to 10:05 a.m. in the Lamont Forum Room.

In advance of his visit, Lewis wrote a more-than-1,000-word essay — which Clark emailed to all committee members — arguing that “single-gender-ness” is not the “real problem” with the final clubs. He urged the committee to publicly denounce “the tangible problems”: the “drunken carousing” and the “queues of women waiting to gain entrance” to certain all-male final clubs.

“Identify the dangerous places and the behaviors,” Lewis wrote in the essay, obtained by The Crimson. “Get the message out, and hit it hard.”

At the close of that April 28 meeting, with the end of the semester rapidly approaching, committee members took advantage of a planned ten-minute “comments” period to pose questions and express concerns about the body’s future plans. At least one committee member asked whether the committee might be able to extend its deliberations into the fall semester.

That request prompted Clark to seek a conversation with Dean of the Faculty of Arts and Sciences Michael D. Smith, who proved unenthusiastic about the proposal.

“Without wishing to put undue pressure on us, he urged us to try to come up with our recommendations this semester so as not to leave students in a state of uncertainty for too long about what will happen,” Clark wrote in a May 2 email to committee members obtained by The Crimson.

In that conversation, Smith also confirmed that the committee’s final report would go through “various channels for further consultation,” including the Standing Committee on Athletics, the Standing Committee on Student Life, as well as various forms of faculty feedback “culminating in a discussion at a Faculty Meeting,” according to Clark’s email.

The final report assigns ultimate responsibility to University President Drew G. Faust, though some faculty have already charged that this path to approval encroaches on faculty authority and violates Harvard statutes.

Smith reassured Clark on one more point: the faculty committee would not be responsible for implementing its own recommendations.

“If our committee comes up with a recommendation other than the current policy, there will likely be implications for its implementation,” Clark wrote in the same May 2 email to committee members. “It will not be our committee’s role to address the details on how an alternative is implemented.”

The day before the faculty committee held its vote in the McFadden Room, co-chair Clark was up late. At 2:24 a.m. on May 11, she sent an email to committee members outlining the meeting’s location and schedule and listing the options to be considered.

In that email, obtained by The Crimson, Clark framed the event as a “straw vote,” designed to broadly gauge members’ opinions. She did not write whether the vote would be considered binding in any way.

After a “welcome” period from roughly 9 a.m. to 9:05 a.m., and after discussing their options from roughly 9:05 a.m. to 10:15 a.m., members made up their minds and cast their votes. Individuals were permitted to vote for as many options as they wished.

Six of 10 total options drew votes. Of the two options that received the highest and second-highest number of votes, respectively, neither was directly mentioned in the committee’s final report.

The option that received the most votes — 12 in total — suggested Harvard form a new committee, composed of students and faculty, that would monitor Harvard’s final clubs and push them to become more inclusive over time.

The next most popular option involved banning all Harvard organizations that selected their members based on race, sex, or socioeconomic status. That option received 11 votes.

The strategy eventually adopted by the committee in its final report — that Harvard enact a social group ban similar to those enforced at Williams and Bowdoin — earned seven votes.

A proposal that Harvard keep the social group penalties announced in May 2016, albeit with possible amendments, received five votes. A two-part option that involved requiring all social groups to go co-ed and forming a new committee to oversee that process garnered three votes.

Other options suggesting Harvard restrict social group membership to upperclassmen, embrace single-gender social organizations, or institute a one-year phased transition to a potential social group ban did not draw any votes. The proposal that Harvard “do something else” also received zero votes. 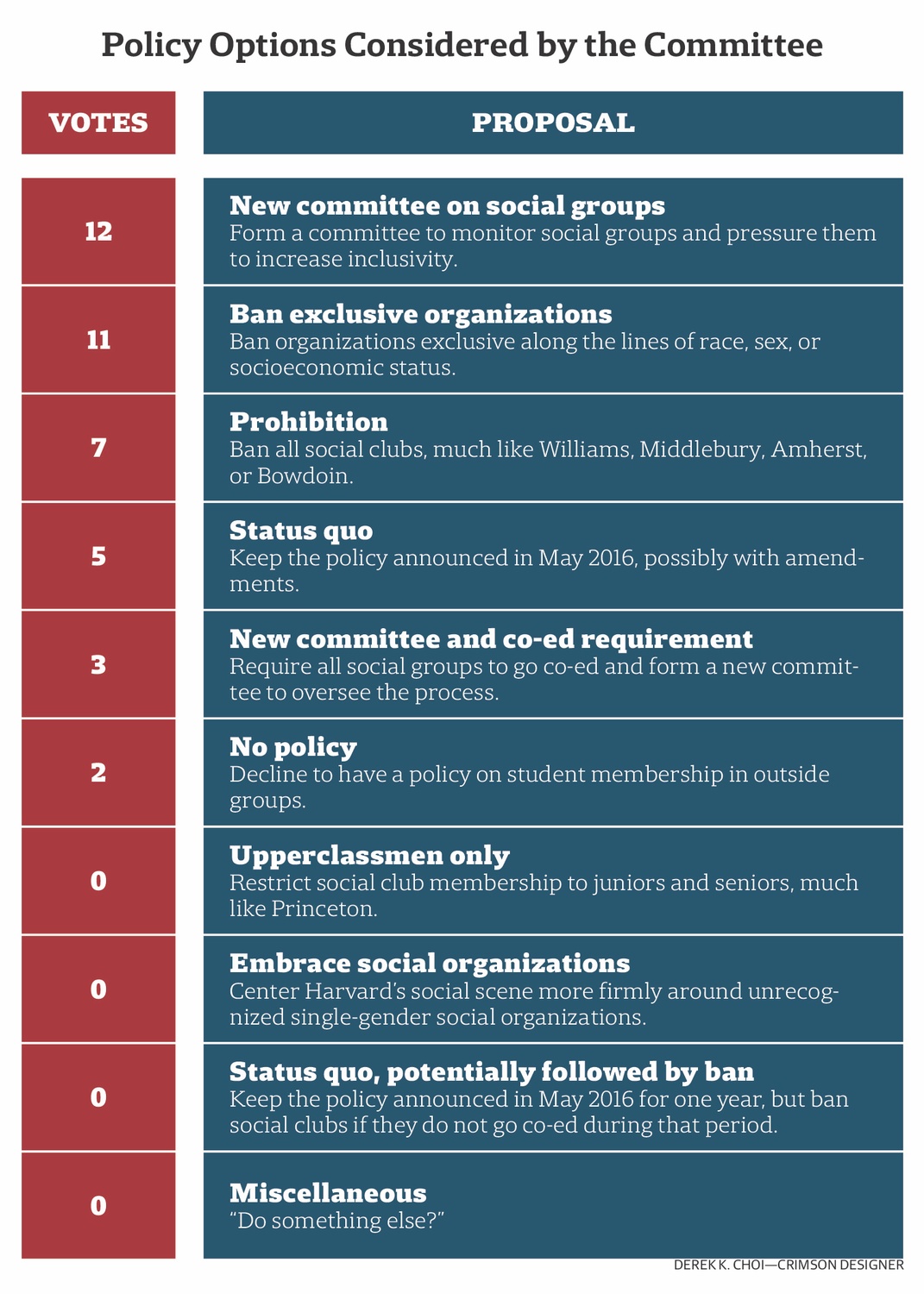 This tally is based on documents reviewed by The Crimson and was verified by two members of the committee.

The results of the May 12 vote were inconclusive — but the committee moved forward to officially recommend the third most popular proposal. Committee leaders closed the subsequent meeting, on May 26, by declaring they would send members a first draft of a final report.

On June 25, almost exactly a month after the committee’s last meeting, members received an email with a final draft of the report attached, according to three members. Committee members were informed they had five days to review the document and submit feedback.

Some members were unable to finalize their comments by the end of the feedback period. Others did not finish reading the approximately 20-page report in the five days allotted.

The report was slated to be given to Smith on July 5. Roughly a week afterwards on July 12, once Smith had had a chance to review the document, committee co-chairs Khurana and Clark emailed the report to the entire student body.

The report was supposed to be delivered to faculty the same day. But due to a “technical issue,” faculty did not receive the report until two days later.