PREVIEW: Men's Hockey to Host No. 16 Cornell One Week After MSG Victory

The Crimson will first turn its attention to Colgate, who will come to the Bright-Landry Hockey Center on Friday 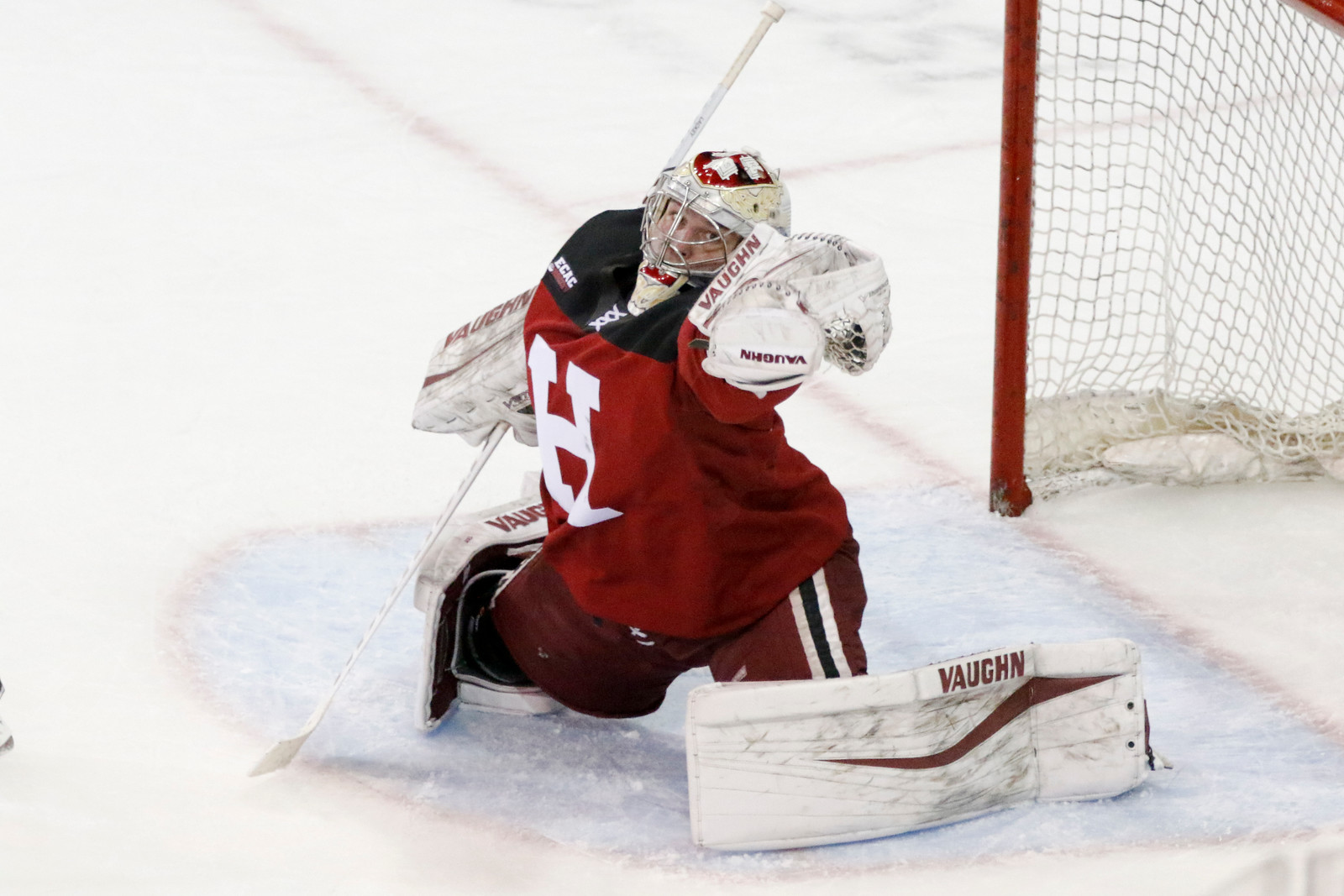 Senior net-minder Michael Lackey will look to follow up his confident performance at MSG with another sturdy effort (or two) this weekend. By Timothy R. O'Meara
By Spencer R. Morris, Crimson Staff Writer

The Harvard men’s hockey team will not have to wait long before it sees No. 16 Cornell again. After defeating the Big Red (5-4-0, 3-1-0 ECAC) last week in front of a Madison Square Garden crowd, the Crimson (3-3-2, 1-2-2) plays host to the Ivy League rival this Saturday, only now with conference points up for grabs.

Before turning its attention to Cornell, Harvard will battle the Big Red’s Upstate New York travel partner, Colgate, on Friday evening looking to avenge last year’s series sweep at the hands of the Raiders (3-7-1, 1-2-1).

In 2017-2018, the Crimson’s January homestand against the two ECAC foes marked the most frustrating weekend of the campaign. On the backs of stellar goaltending — and a bit of bad puck-luck for the hosts — Cornell and Colgate both held Harvard off the scoresheet, halting an eight-game point streak for the Crimson.

It’s a new year, however, and Harvard will ride its MSG-born momentum into a crucial opportunity to earn its first four-point weekend of the season.

“We know that we’re going to have to start really bearing down in those [conference] games,” said Crimson co-captain Lewis Zerter-Gossage. “This weekend, in particular, with Colgate and Cornell coming in, we know that it’s a huge opportunity for us.”

Last Saturday at the Garden, the Crimson’s strengths were on display against the favored Big Red. The team’s cohort of young, skilled forwards penetrated the esteemed Cornell defense and prevented the Big Red from gaining the advantage through its characteristic physicality and aggressive forecheck. 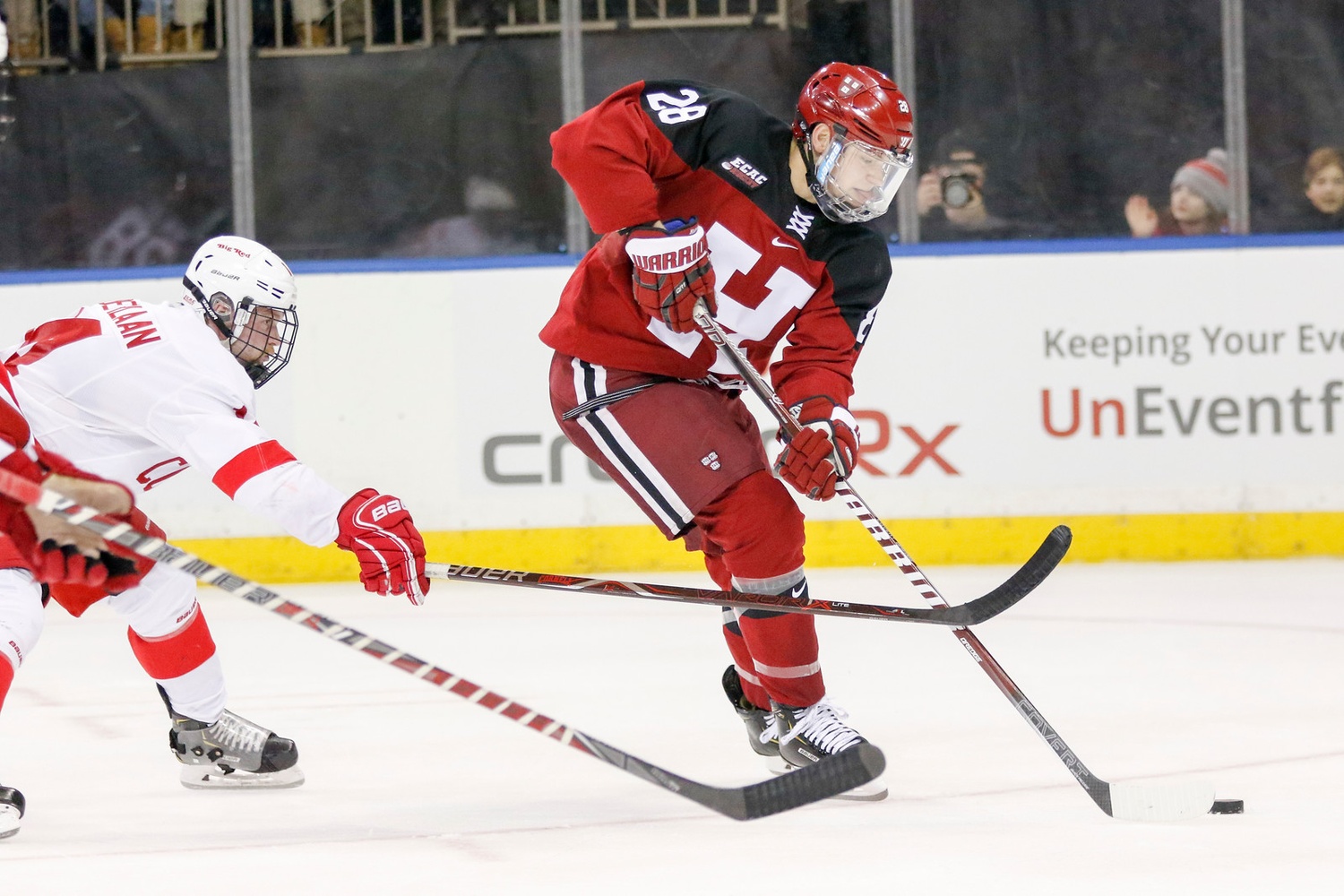 Sophomore Henry Bowlby, pictured here slipping a puck through Matthew Galajda's five-hole last weekend at MSG, has been part of the most effective forward line for the Crimson this season. By Timothy R. O'Meara

Both the success of Dornbach’s line — which includes Bowlby and freshman Jack Drury (2–7—9) — and the potency of the powerplay are forces that Harvard will look to leverage in its bouts this weekend.

The squad’s young second line has combined for 25 points early on this season, setting the tone up front for the Crimson, which leads the ECAC and sits fourth in the nation in goals per game (3.88). In part, the early chemistry seen between the linemates began well before their respective collegiate careers.

Bowlby and Dornbach, both hailing from Edina, Minn., skated together in their youth hockey days. They continued to build their relationship as high school teammates before overlapping for a season in junior hockey, too.

“We did have the same path,” Dornbach said. “It’s kind of fun being able to play together again…. I honestly didn’t think about it much, and then once [I was placed on a line with Bowlby], I was like, ‘Alright, I remember why we were playing together.’” 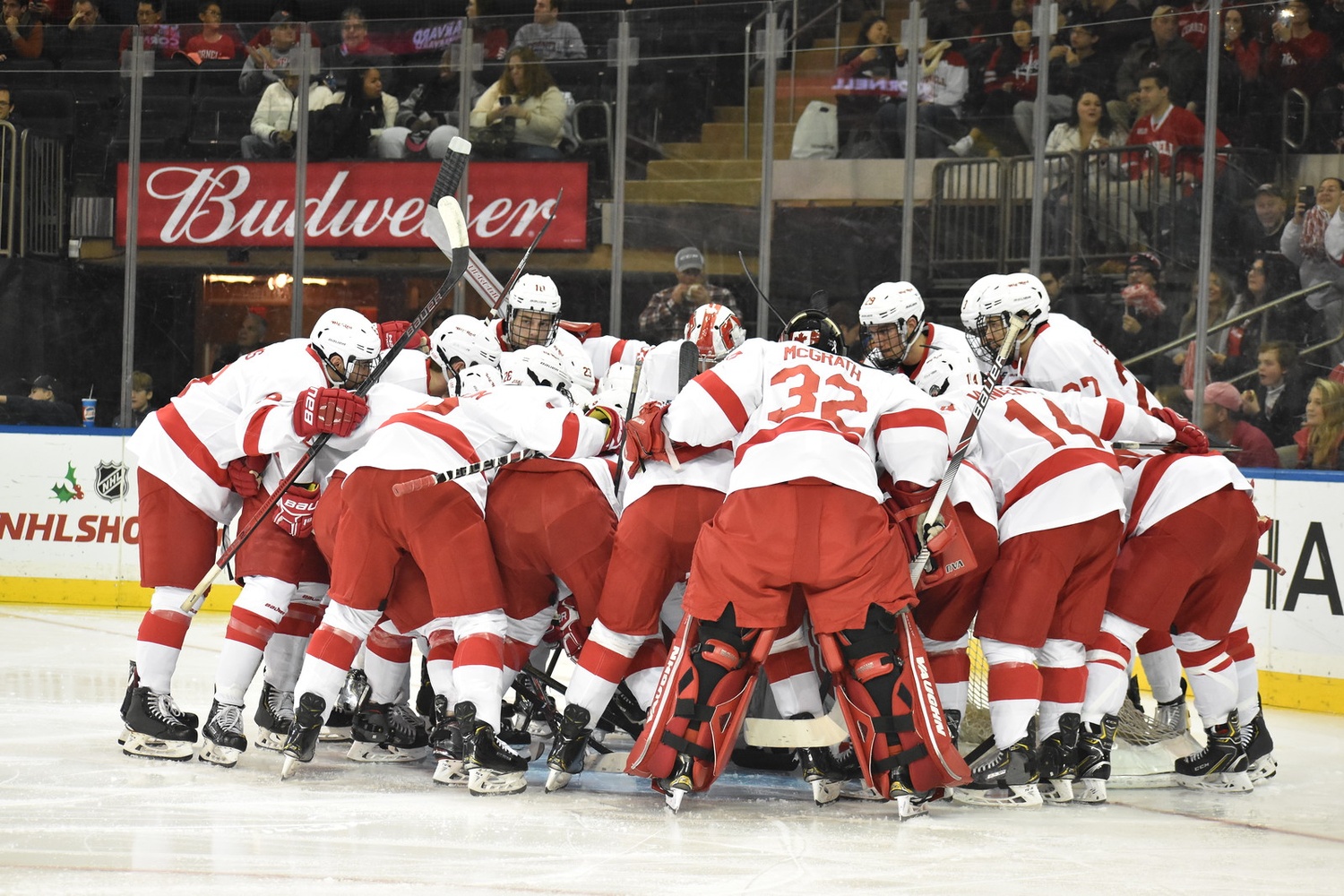 Harvard expects Cornell to bring a stronger, more physical performance into its barn on Saturday. By Amanda M. DiMartini

Harvard’s powerplay, which leads the NCAA at a 35.1% clip, went 1-for-4 last weekend against Cornell, capitalizing on a struggling Big Red penalty kill unit. After finishing top-15 last season in man-down efficiency (83.2%), Cornell is currently tied for eighth-worst in the country at 75.7%.

Junior defenseman Adam Fox (4–13—17) is a primary reason why the Crimson’s man-advantage has been so effective. The two-time CCM/AHCH All-America First Team selection facilitates the power play from the left point and has done so since arriving at Harvard.

As a freshman, Fox finished second in the NCAA in powerplay assists per game (0.63); as a sophomore, the rearguard sat atop the nation (0.55). Through eight games this season, Fox is setting the pace nationally in assists per game and points per game.

Zerter-Gossage (6–2—8) has also been an effective piece in Harvard’s attack. The senior heads into the weekend on a three-game goal streak (4–1—5 during that span) and provides a larger presence at the net-front as well as more veteran experience amid a young forward corps.

Zerter-Gossage saw improvements in his team’s play in its recent victory over the Big Red.

“We managed the situation well, played well after goals, and did all the small things well,” the co-captain said. “That’s what we are starting to learn, is how you win games in this league, especially against teams like Cornell…that try to play a physical defensive style.” 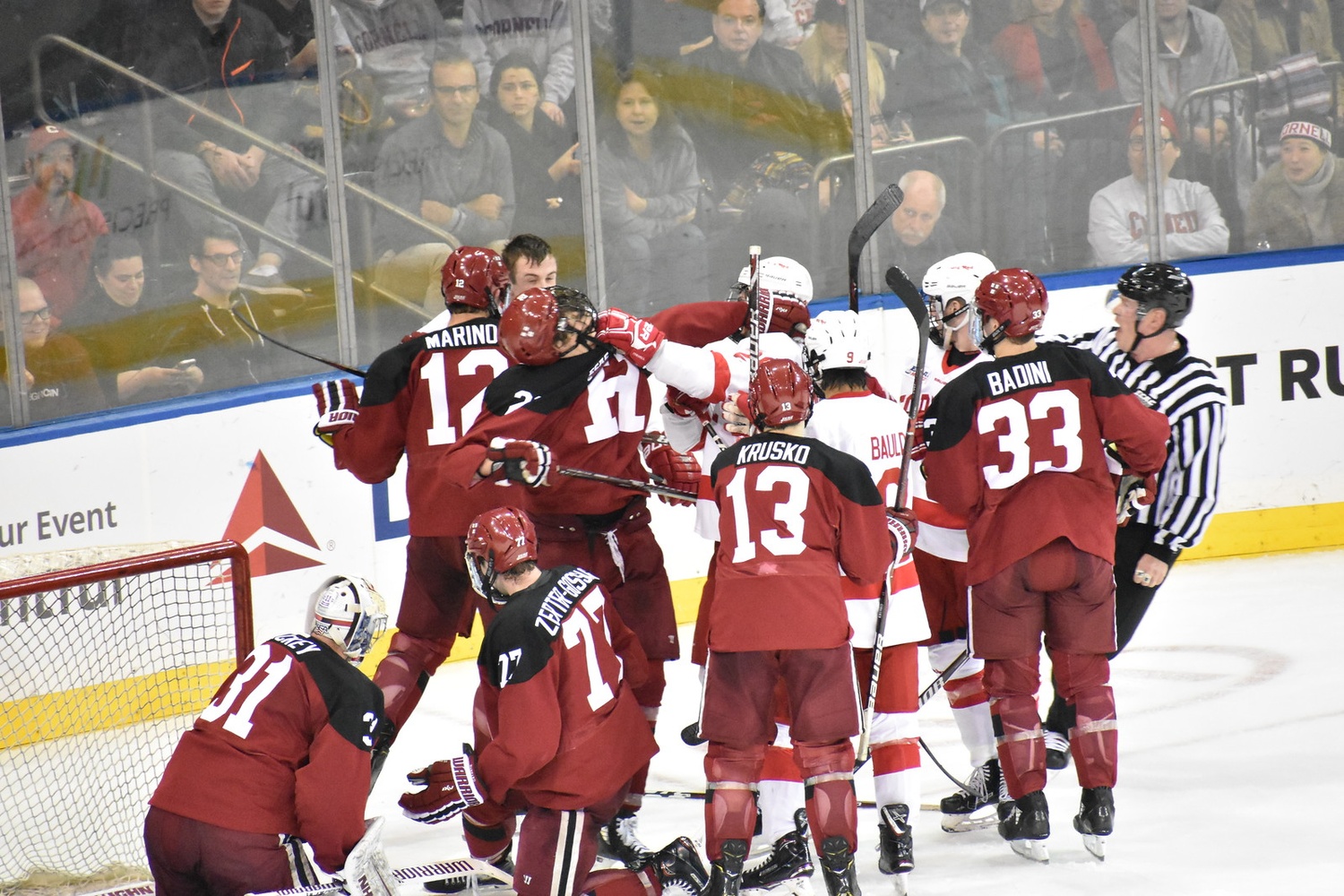 Despite the success at the Garden, Zerter-Gossage knows that another win against the Ithaca rival will be more difficult.

“I’m sure they won’t be happy with how the result went on the weekend,” he said. “It’s going to be a completely different game, they’ll be gunning at us, and we’re going to have to be ready to weather the storm.”

Saturday’s contest will likely see a rematch between two goalies whose play is crucial to their respective teams’ destinies. In net for the Crimson, senior Michael Lackey (3-2-2, 2.92 GAA, .893 SV%) posted his best performance of the season at MSG (1 GA, .968 SV%).

Staring down at Lackey will be sophomore Matthew Galajda (5-4-0, 2.59 GAA, .885 SV%), whose numbers thus far have not lived up to expectations after he led the nation in goals against average (1.51), sat third in save percentage (.939), and posted a freshman-best 21 victories in 2017-2018. Galajda dominated the Crimson last season and will be looking to return to form against Harvard on Saturday.

Cornell also suffered from the injury bug last weekend, missing four regulars in the lineup including two top-four defensemen. Regardless of these banged-up skaters’ statuses come Saturday, the Big Red will prove a formidable opponent for the Crimson — a pair of victories over Cornell in the 2018 portion of the schedule would solidify Harvard as a contender for the ECAC this season.

Of course, the Crimson must first direct its attention to Colgate, its Friday night foe and deliverer of a season sweep last year for the first time since 2009-2010.

The lynchpin of the Raiders’ success last year was former net-minder Colton Point (16-12-5, 1.74 GAA, .944 SV% last season), who has since embarked on his professional career with the Dallas Stars organization. In two meetings last season, Point stymied Harvard, allowing just a single goal and posting a 51-save shutout at the Bright-Landry Hockey Center. 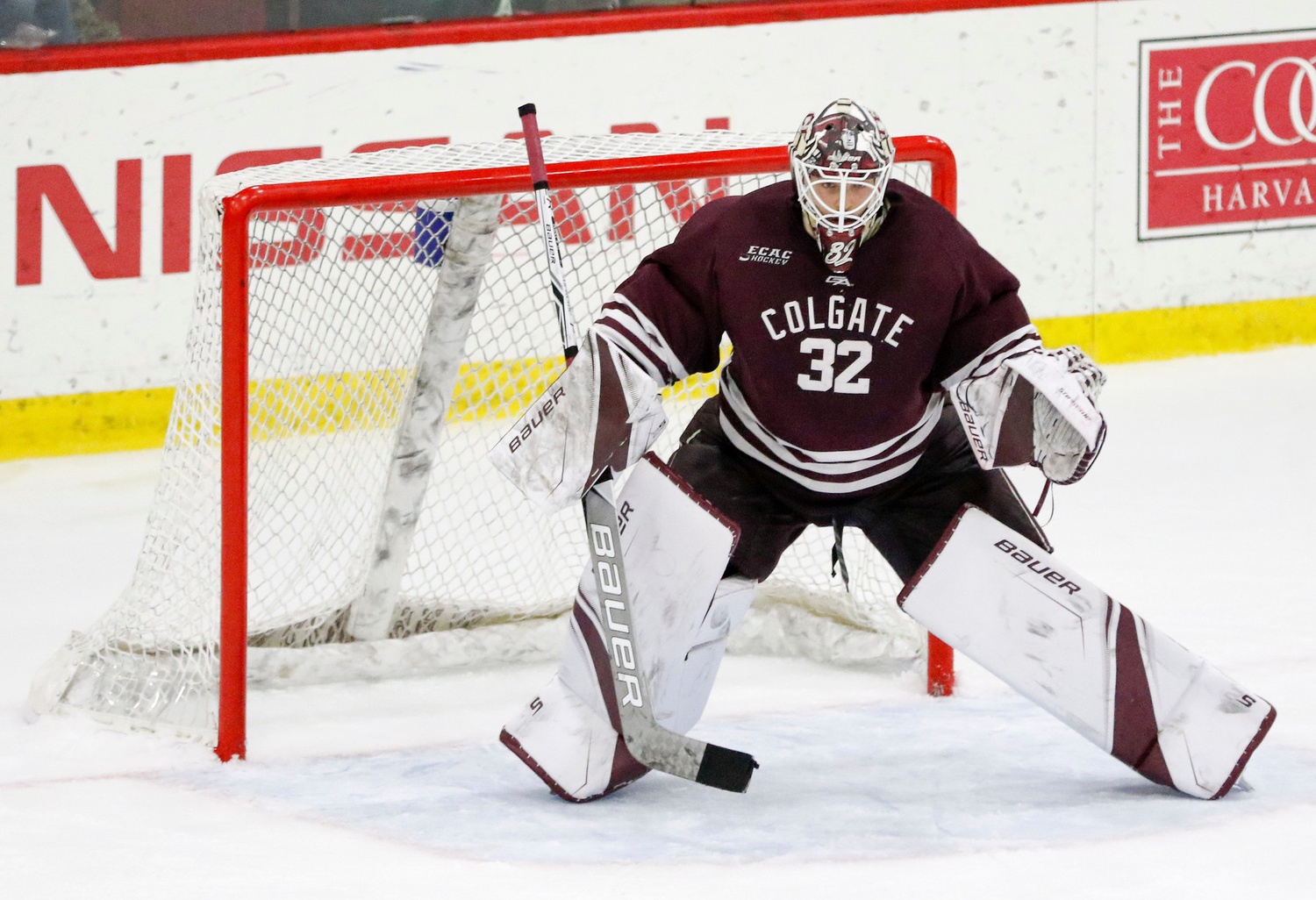 Former Colgate net-minder Colton Point shut the Crimson down last season, ceding a single goal over two games and notching a 51-save shutout in the process. By Timothy R. O'Meara

With Point no longer fielding pucks, Colgate lacks a sturdy last line of defense and has struggled due to its anemic offense. The Raiders own the second-worst goals per game average in college hockey (1.09) and suffer from a bottom-five powerplay (9.5%).

Nevertheless, Colgate earned an impressive victory over ranked conference opponent Princeton, a team the Crimson tied, 4-4, earlier in the campaign. So parity, especially in the ECAC, is a very real phenomenon, and one that causes Harvard to take every game seriously.

“These games have the same standing for us at the end of the year in terms of ECAC points,” Zerter-Gossage said. “They’re both important games. If we lose to Colgate, we’ll feel that as much as if we beat Cornell the next day.”

Each week, the Crimson continues to hone its game and work toward the goals it failed to attain last season. A victory against a ranked Cornell squad under the bright lights of MSG was a start, but a pair of wins this weekend would put Harvard back in the ECAC conversation.

“I think we’ve grown a lot closer,” said Dornbach, reflecting on the strides the team has made since pre-season. “[We have] a lot more trust in each other now from top to bottom of our lineup and our goaltending. We’re starting to believe in each other and hopefully this weekend we can get above .500, and I think we’re really taking off from there.”