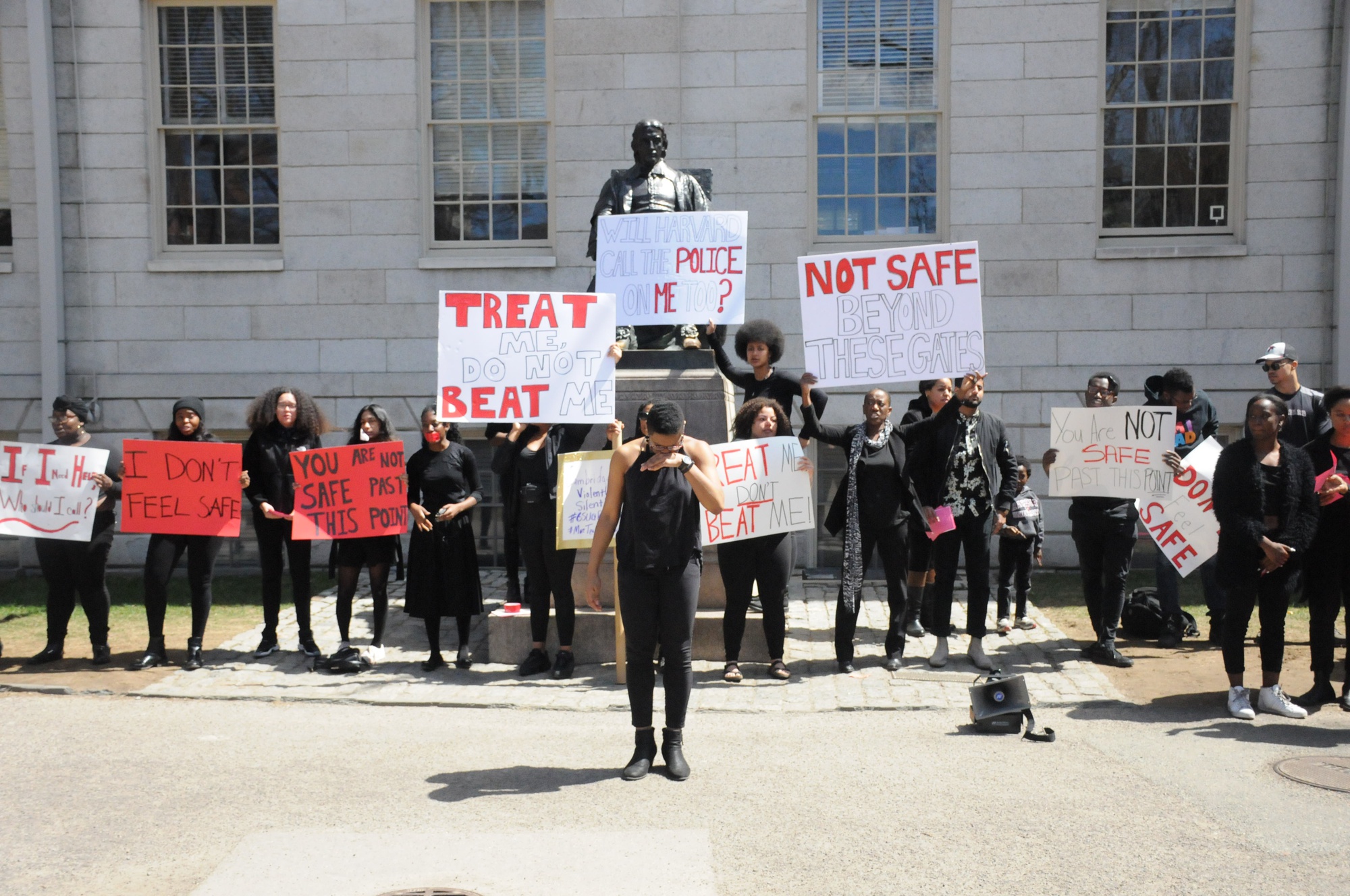 Over 200 students gathered Saturday to protest the April 13 forcible arrest of a black College student that has sparked allegations of police brutality.
By Shera S. Avi-Yonah and Ellen M. Burstein, Crimson Staff Writers

Cambridge police officers forcibly arrested a black undergraduate the night of Yardfest, the College’s annual concert, in mid-April. The confrontation sparked allegations of police brutality and made national headlines.

Before Cambridge Police Department officers arrived at the scene, the student stood on Massachusetts Avenue feet from Pound Hall, the Law School building where Harvard University Health Services operated after hours earlier this year. His exact location, though, meant CPD — instead of the Harvard University Police Department — responded to a call from HUHS about his behavior.

Different accounts emerged from CPD officials and campus groups about what happened next.

A video published by CPD showed police surrounding the student, who raised his arms to chest-level before an officer tackled him from behind. Officers then punched the student five times in an attempt to restrain him, according a CPD report.

Hours later, the Black Law Students Association called the incident “a brutal instance of police violence.” In a statement, they argued the account CPD released was “incorrect” and wrote that some of their members saw the student naked, unarmed, and surrounded by police officers.

The CPD officers charged the student on multiple accounts including indecent exposure, disorderly conduct, assault, and resisting arrest. Police later dropped the charges in May after significant public outcry.

At the College, some students responded to the arrest by forming the group Black Students Organizing for Change. The students protested in the Yard, holding signs that read “Not Safe Beyond These Gates” and “Treat Me, Don’t Beat Me.” They also circulated a letter calling administrators’ response to the incident insufficient.

In the months since the student’s arrest, both Harvard and CPD officials have conducted reviews of the night’s events.

In late April, then-University President Drew G. Faust formed a committee and tasked it with undertaking a “systematic examination” of a series of Harvard policies related to the arrest. The committee — chaired by Law School professor Annette Gordon-Reed — released its report in November.

The group recommended that Harvard administrators explore a number of policy changes to respond to the arrest. The committee wrote that heavy drinking and drug use among undergraduates during Yardfest strained HUPD’s resources that night. HUPD Chief of Police Francis “Bud” D. Riley was also quoted in the report saying he would have preferred that Harvard police respond to the call.

CPD conducted an internal review mandated by internal policies surrounding officers’ use of force. The department will also add a new office to monitor use of force and racial bias in officers’ interaction with citizens. Separately, department officials tapped former Chief Justice of the Massachusetts Supreme Judicial Court Roderick L. Ireland to lead an independent inquiry, but have yet to disclose when investigators will complete it.