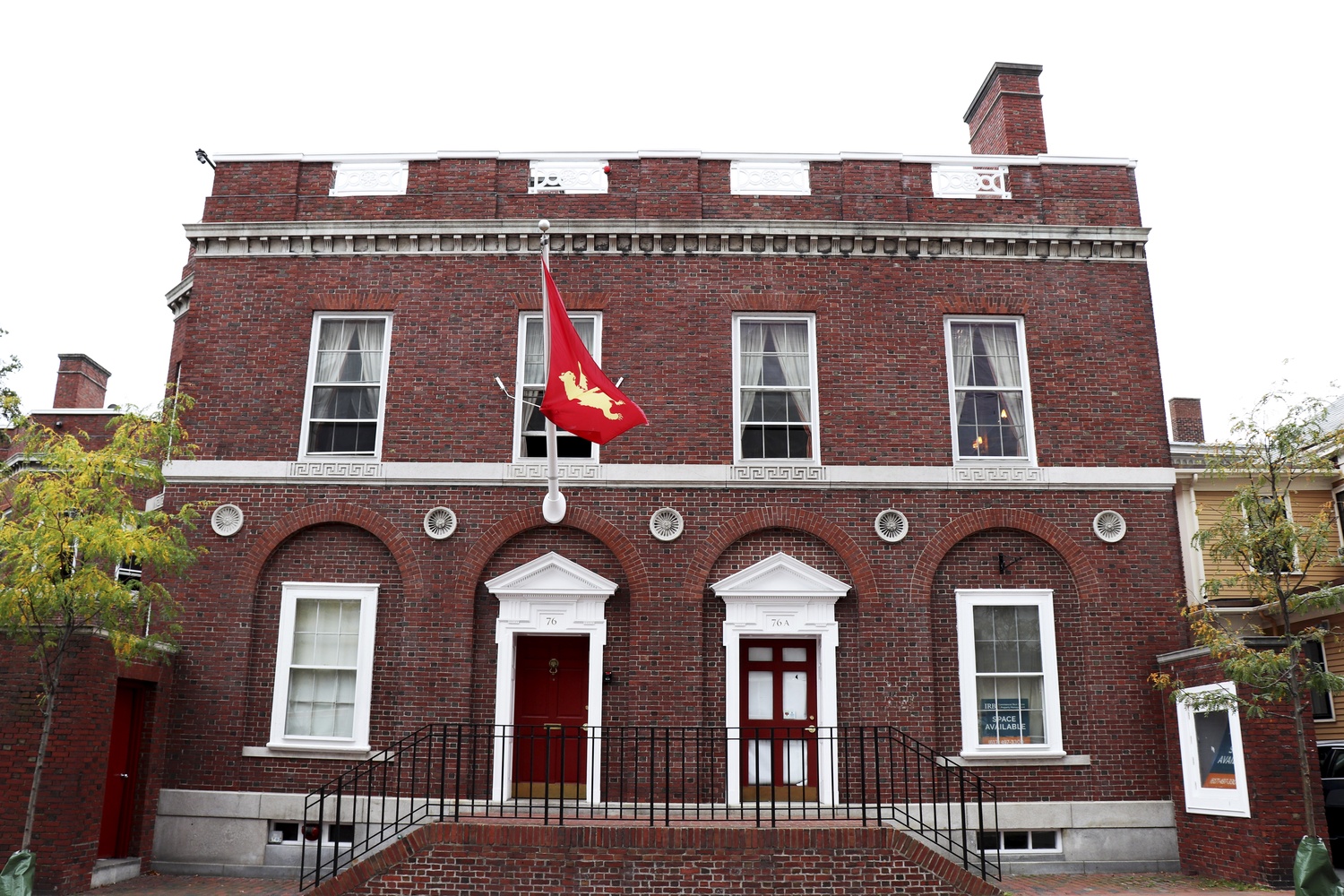 Harvard is considering requiring gender-neutral student social groups to disclose anonymized gender breakdowns to the College in order to avoid Harvard’s sanctions, per an email sent March 25 to the leaders of some social organizations by a College administrator.

The proposal, if implemented, may add a hurdle for social groups seeking to evade the penalties—some members of social organizations previously thought adopting gender-neutral membership practices would be sufficient to elude the sanctions.

The College is also considering tying funding and use of Harvard-owned spaces to how well social organizations foster “an inclusive social atmosphere,” according to the email, obtained by The Crimson. Under the proposed “framework” outlined in the email, only social groups that “substantially contribute” to creating an inclusive environment would be eligible for both these benefits.

Director of Special Projects Christopher M. Gilbert, who works with social groups interested in going gender-neutral, sent the email. Administrators previously announced the College would develop a “new framework for governing primarily social organizations” as part of its implementation of the sanctions; Gilbert’s email outlines what appears to be a draft of that framework, though it applies only to gender-neutral groups.

In the email, Gilbert specifically requested that recipients keep the message “confidential” and asked for feedback. He repeatedly emphasized the framework is not final and is still being workshopped.

“These are not finalized plans, these details are being shared as a brainstorming process to receive your feedback,” Gilbert wrote. “This process will be ongoing and the final plans may therefore change substantially as part of our work together.”

In the months following the policy’s announcement in May 2016, a wave of formerly single-gender social organizations have gone co-ed. At least seven have done so, including the Fleur-de-Lis, the KS, the Aleph, the Oak Club, the Sab, the Seneca, and the Spee Club.

Under the suggested framework, these groups would be forced to submit a gender breakdown of their membership to the College in order to become recognized, avoid the sanctions, and qualify for the lowest tier of a new three-level system, per the email.

The lowest tier is titled the “Minimum Standard”; the other two, higher tiers are titled the “Standard for Recognition” and the “Standard of Excellence.” Though each level of the system confers College recognition and exemption from the sanctions, each would carry different “sets of responsibilities and privileges,” Gilbert wrote. 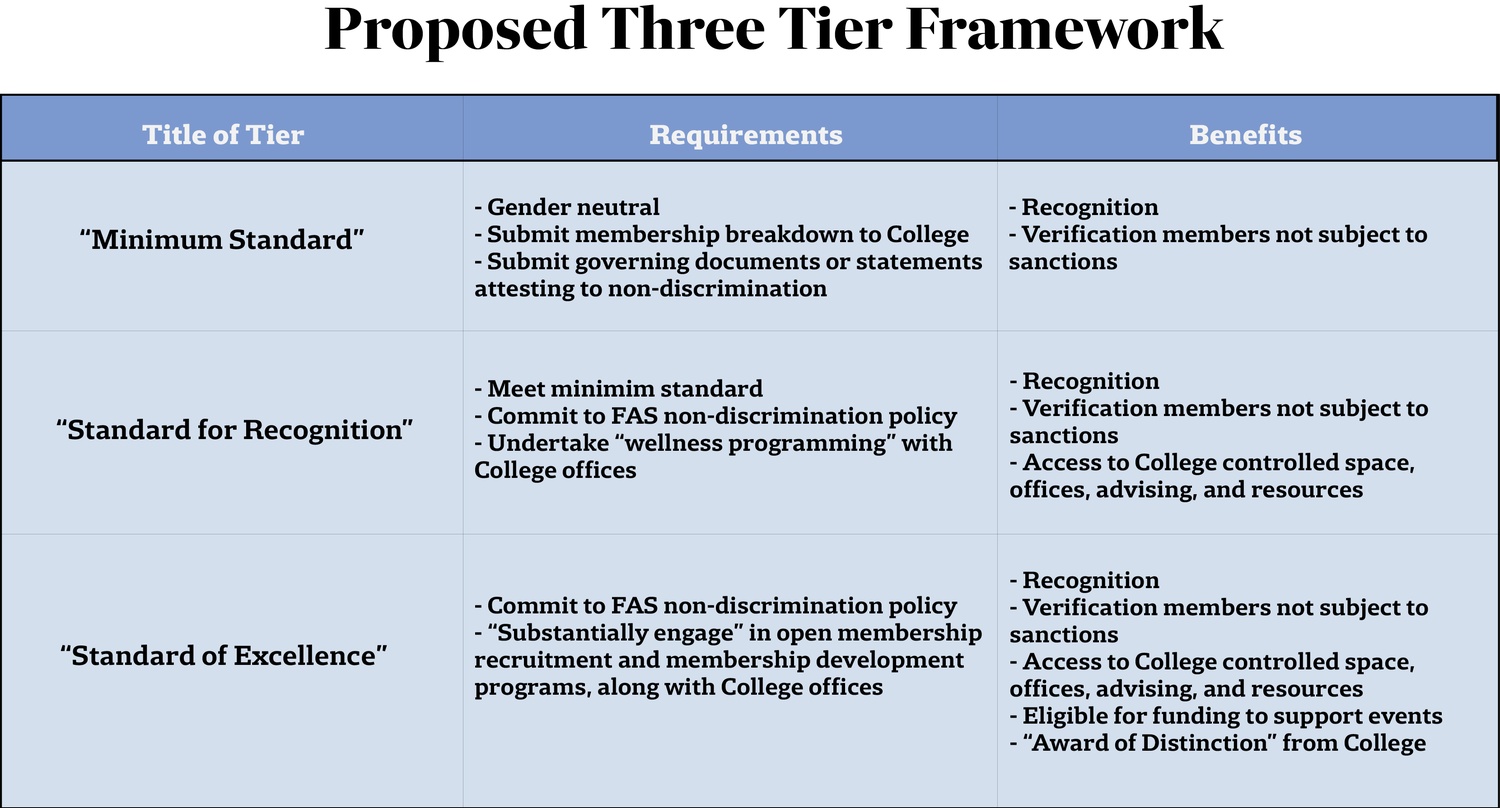 “The Minimum Standard is a requirement for groups not to be subject to the social organization policy sanctions,” Gilbert wrote. “This is because if the College is to acknowledge that a group is non-discriminatory in its membership policies, we must attest to that fact.”

Gilbert noted the submitted breakdown “should not include member names.”

Other administrators previously shied away from the suggestion that social groups furnish demographic data. In a Feb. 2018 interview, Associate Dean of Student Engagement Alexander R. Miller—asked whether the College would require social organizations to release membership lists or demographic breakdowns—said Harvard does not plan to do so. The question did not ask whether the release would be public or private.

Groups would face one additional requirement for earning “Minimum Standard” status—the organizations would also need to provide “governing documents or public statements” that “attest” to non-discrimination policies, according to the email. In exchange, the College would “verify the group’s members” are not subject to the sanctions, Gilbert wrote.

In a section of the email titled “RECAP,” Gilbert also outlined the requirements for the other two tiers.

To achieve the “Standard for Recognition”—the second-highest tier in the system—groups must fulfill the requirements for the Minimum Standard and must also “commit to [Faculty of Arts and Sciences] non-discrimination policy,” per Gilbert’s email. Groups in this tier would also have to “undertake some wellness programming with College offices,” he wrote.

In return, the College would “provide access” to “College controlled space, offices, advising, and resources” to these groups, Gilbert wrote.

The top tier—called the “Standard of Excellence”—is accessible only to “those groups which substantially contribute to creating an inclusive social atmosphere,” per the email. In addition to complying with FAS non-discrimination policy, these organizations would need to “substantially engage in open membership recruitment and membership development programs,” Gilbert wrote.

Groups in the “Standard of Excellence” tier would “be eligible for additional funding to support events and will be recognized” by the College with an “award of distinction,” per the email.

“As announced in March of this year, the Office of Student Life is currently engaged in a process of developing a new framework for governing primarily social organizations and is developing this new framework in active partnership with social groups already committed to becoming gender-inclusive or ones that have expressed interest in doing so,” Dane wrote in an emailed statement. “As we shared with the community in March, OSL hopes to present such a framework to the College community, with the goal of making it operational in the fall of 2018.”

The College held a retreat with the leaders of some social groups April 27 to “workshop details of what we hope will become the final framework for recognition,” Gilbert wrote in the email.

Dane did not answer a question asking what administrators and social group leaders discussed at this retreat.

Near the close of the email, Gilbert noted that—in previous meetings with student leaders of certain social groups—some attendees had raised concerns over “the powerful role that physical space, endowments, and access to resources play” in helping decide “relevance on-campus.” He solicited recipients’ thoughts on how the College could best provide “capital” to help students “advance an inclusive social scene” at Harvard.

“You are building something new and exciting that will shape our campus in ways that may seem difficult to imagine today, but will have lasting impact on students in the future,” Gilbert wrote. “Our role is to help unleash your creativity and support this work over the coming months and years.”