“It is a victory for the diversity … that, I think, contributes significantly to our excellence,” Faculty of Arts and Sciences Dean Gay said at a faculty meeting, to thunderous applause. “If it was a cloudy day to start, hopefully it's ending with a few more bits of sun.”
By Shera S. Avi-Yonah and Amanda Y. Su 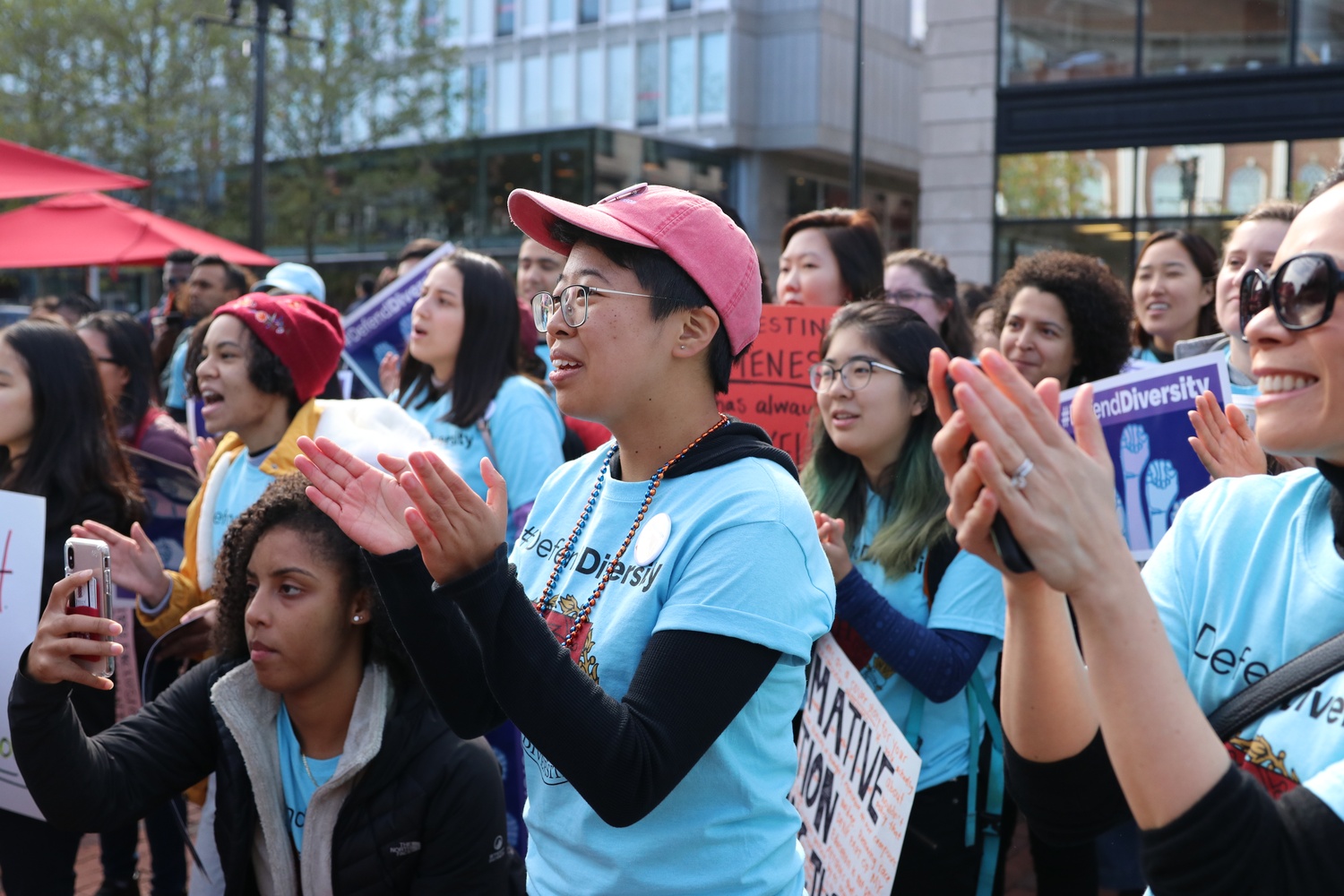 Sally Chen '19 came up with the name for the #DefendDiversity rally, held at the Harvard Square Pit on Oct. 14, 2018, the day before the admissions trial began. By Allison G. Lee

As Catherine H. Ho ’21 sat in a lab on Tuesday, her mind was far from the federal courthouse where she had testified in the Harvard admissions trial nearly a year ago.

Then her phone lit up with a news alert. Judge Allison D. Burroughs had ruled in Harvard’s favor. Ho said the news immediately brought back memories of her time on the stand and her work last year to defend affirmative action alongside other undergraduates and alumni.

“Within the next 10 minutes I got a bunch of texts from different people asking for it to be confirmed or not confirmed,” she said. “We kind of had hopes or expectations that the decision would come out in September, October, but obviously you live day to day.”

“Removing considerations of race and ethnicity from Harvard’s admissions process entirely would deprive applicants, including Asian American applicants, of their right to advocate the value of their unique background, heritage, and perspective and would likely also deprive Harvard of exceptional students who would be less likely to be admitted without a comprehensive understanding of their background,” Burroughs wrote.

The lawsuit — and its three-week trial last fall — galvanized Harvard’s campus. Student groups and administrators held workshops, circulated emails, and spoke out in favor of diversity. A group of undergraduates trekked to the John Joseph Moakley United States Courthouse to watch their peers testify, donning t-shirts that read “#DefendDiversity.”

Though Burroughs has deemed Harvard’s admissions policies constitutional, the case is far from over — SFFA President Edward Blum announced almost immediately that the organization will appeal her decision.

“It is a victory for the diversity … that, I think, contributes significantly to our excellence,” Gay said. “If it was a cloudy day to start, hopefully it's ending with a few more bits of sun.”

Dean of the College Rakesh Khurana, who took to the stand during the trial’s second week, wrote in an email to The Crimson that he is “profoundly grateful” for the decision.

“Each day I am privileged to witness the education of our students through exposure to novel ideas and interactions with people whose backgrounds, points of view, and life experiences are profoundly different from their own,” he wrote. “A Harvard education extends far beyond our classrooms and lecture halls to our dining halls, residences, and the many formal and informal opportunities for our students to learn from each other.”

Students and alumni — including Ho and the other student witnesses — said the decision is a welcome capstone to more than a year of activism on their part. They said they saw the decision not as a sign that Harvard’s admissions processes are perfect, but rather that affirmative action has a strong legal basis.

Several months before the trial began in October 2018, 25 Harvard student and alumni organizations signed an amicus brief filed by the National Association for the Advancement of Colored People Legal Defense Fund supporting Harvard. In the week before the lawsuit went to trial, various student groups hosted a series of panels and teach-ins, as well as a rally in Harvard Square defending affirmative action.

The NAACP LDF also helped Ho and the other four student witnesses prepare for their day on the stand.

Student witnesses Thang Q. Diep ’19 and Madison A. Trice ’21 both said that — like Ho — the decision caught them by surprise. Trice said she got an email from the LDF about the verdict during a Harvard Divinity School lecture and immediately called her mother. Diep heard about the decision via text messages from friends while he was in a meeting with the Boston Public Schools’ superintendent.

“I was so happy. Holistic admissions has been something that has been on my heart for a really long time, honestly, since I was a little girl,” Trice said. “I always dreamed of the place I would get to study and dreamed about college. I would talk to my parents a lot and I think I came to the conclusion at a very early age that without holistic admissions, that wouldn't happen.”

In Burroughs’s decision, she referenced the alumni and student testimonies multiple times. She wrote that their testimonies showed how race played a critical role in their experiences before and during their time at Harvard.

Jeannie Park ’83, president of the Harvard Asian American Alumni Alliance and Coalition for a Diverse Harvard co-founder and board member, said she found Burroughs’s use of the alumni and student testimonies to be the most “gratifying” part of the verdict.

Michael G. Williams ’81, a Coalition for a Diverse Harvard co-founder and board member, praised both Burroughs’s decision and coalition-building among diverse student and alumni groups.

“All these different organizations with different experiences, different backgrounds, different commitments, different ideas were able to come together in support of diversity and race conscious admissions,” Williams said. “I think that all of those efforts reflect what happened in the decision today.”

In statements and interviews, leaders of several student organizations that signed on to the NAACP brief said they would continue pro-affirmative action activism.

Black Students Association President Aba A. Sam ’21 said her organization will continue to be “active and engaged.” She added that the trial caused her and BSA members to reflect upon personal experiences and their commitment to diversity.

“Thinking about admissions inadvertently kind of brings your own admission to the forefront of your mind, at least for me,” she said. “I think that it's been a very reflective year in that sense. When you get into talking about what value does a student bring, how do you measure value, that kind of thing, it's sort of a really meta conversation.”

“I think it sort of reminded us about exactly why we love diversity on campus,” Sam added.

Not all students reacted to Burroughs’s ruling happily, though. Kelley A. Babphavong ’20 — who spoke at an SFFA rally the weekend before the trial — said that while she is not surprised by the ruling, she hopes the verdict changes upon appeal.

“I really hope the case is appealed, and I want this to make its way all the way to the Supreme Court,” she said. “I do not believe in affirmative action in the way it currently stands today.”

Former Asian American Association Co-President Jonathan T. Paek ’20 said that many of the student activists involved in last year’s trial will graduate before the appeal begins in earnest. He added that he believes a future trial will see similar levels of undergraduate engagement.

“I have the utmost faith in the next generation of Harvard’s leaders to take on that mantle and really do a good job,” he said.

Trice agreed, adding that she expects to do more work to defend affirmative action in the future.

“Today is a day of celebrating. Then tomorrow, I'll be back to try to think about ways to push forward,” she said.