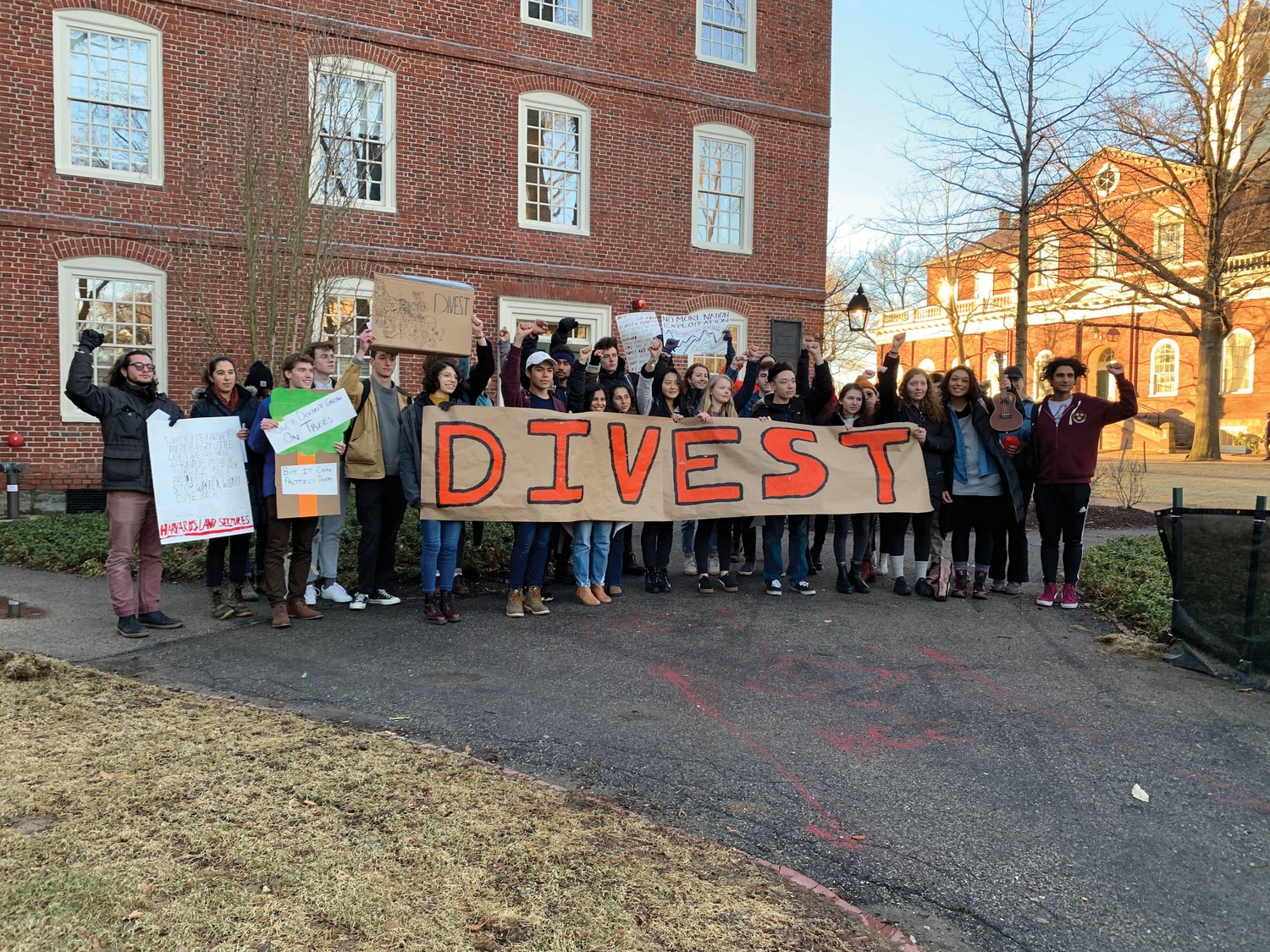 A group of University affiliates call for divestment from fossil fuels in front of Massachusetts Hall in February. By Alexandra A. Chaidez
By Jonah S. Berger and Molly C. McCafferty, Crimson Staff Writers

Members of the Faculty of Arts and Sciences called on University President Lawrence S. Bacow to lead a Faculty discussion on Harvard’s fossil fuel investments, citing “widespread, deep, and reasonable disagreement” with Bacow’s response to the issue.

Philosophy Professor Edward J. Hall raised the issue on behalf of nine professors during the Faculty’s monthly meeting Tuesday. The group asked Bacow to host an open forum or dedicate a portion of a Faculty meeting to the issue, and to include members of the Harvard Corporation — the University’s highest governing body — in the discussion.

“We are not in the first instance a mere corporation, where all substantive decisions are taken by managers,” Hall said. “We are a college, committed to open intellectual debate even on issues that might directly affect our own future.”

“It would, in our view, be ethically and intellectually irresponsible not to let Harvard’s response to this crisis be guided by serious and sustained community-wide discussion,” he added.

Bacow responded that he would be “happy” to fulfill the professors’ request and would see if he could include a member of the Corporation in the discussions. He did not commit to any changes in investment decisions.

The Faculty members’ demand comes amid renewed student-led calls for Bacow and the University’s investment arm, the Harvard Management Company, to withdraw controversial investments, including those in the fossil fuel industry and in companies tied to prisons. In recent months, students have delivered multiple petitions to Massachusetts Hall regarding divestment.

Faculty members across the University most recently organized around the issue in December when the group Harvard Faculty for Divestment issued an open letter to Bacow arguing that the fossil fuel industry’s aims are “discordant with our mission and with the purposes of the endowment.” Since the letter’s publication on Dec. 11, more than 230 faculty have signed on to the statement.

Faculty members have argued for divestment in the past with some success. In the 1980s, professors spoke out against Harvard’s investment in firms that conducted business with the apartheid government in South Africa. The University eventually divested from some of the firms.

Bacow has repeatedly spoken out against divestment, citing a variety of explanations for why he believes divestment would be misguided, including “practical issues” associated with divestment and the importance of research and scholarship when addressing ethical concerns.

Hall said he and the other faculty decided to ask for such a meeting in part because of “widespread, deep, and reasonable disagreement” with Bacow’s stance across the University.

“Maybe those reasons are right, maybe not,” Hall said. “That does not matter to the question we are posing.”

A report released by the United Nations Intergovernmental Panel on Climate Change in 2018 warned that without significant action, the world will face the calamitous effects of climate change by 2040, including more severe wildfires and food shortages. University leaders have set a goal of becoming fossil-fuel neutral by 2026 and completely fossil-fuel free by 2050, building on Harvard’s previous emissions reduction of 30 percent between 2006 and 2016.

In May 2018, a member of one of Harvard’s governing bodies took a stance against fossil fuel investment for the first time. Kathryn “Kat” A. Taylor ’80, a former member of the University’s Board of Overseers, resigned over what she called the University’s failure to “adopt ethical commitments” in its investments, citing fossil fuels specifically.