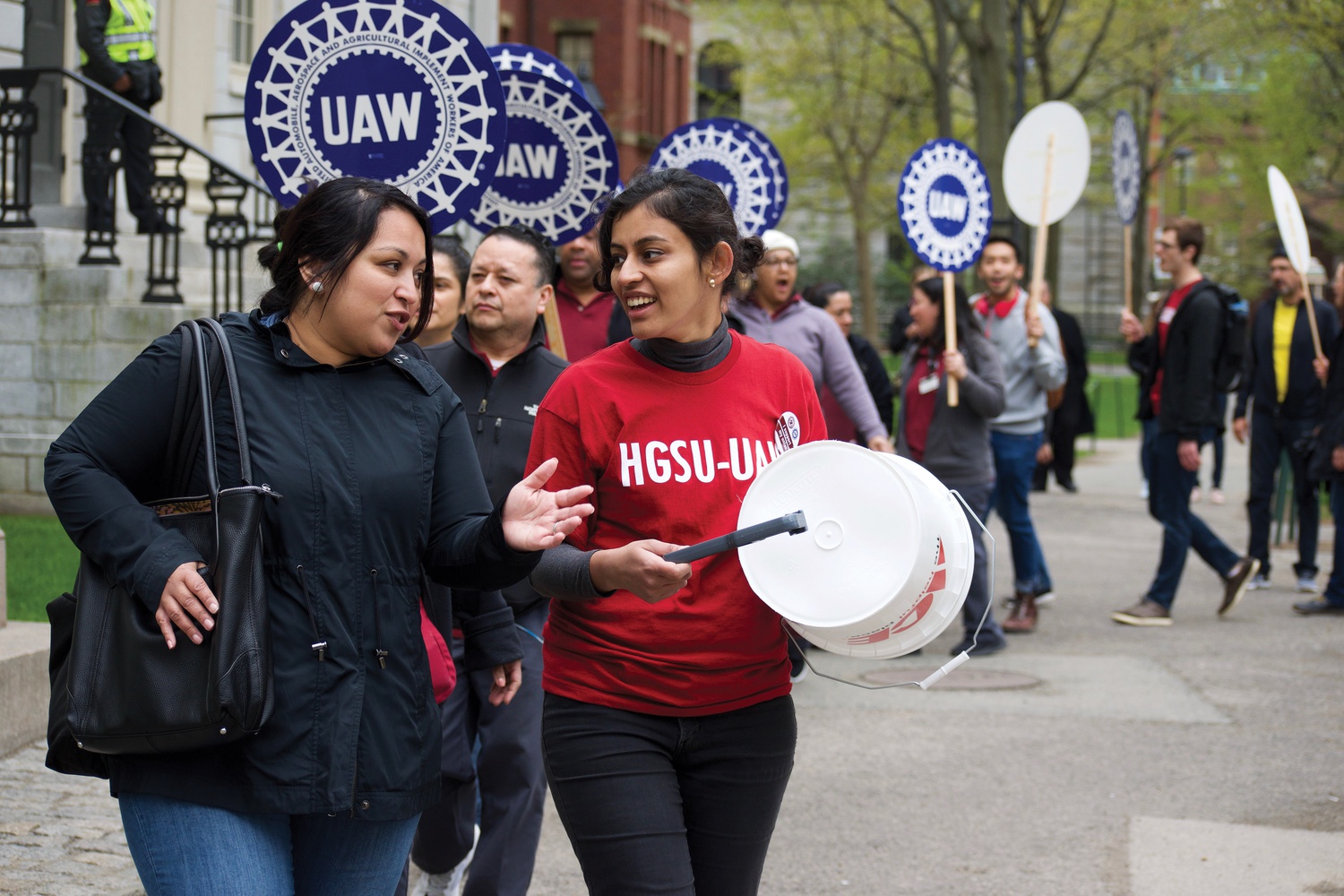 Niharika N. Singh chats to another participant as they march in the Union March in front of the John Harvard statue. Singh is on the bargaining committee for the graduate students. By Amanda Y. Su
By James S. Bikales and Ruoqi Zhang, Crimson Staff Writers

As roughly 30 members of the graduate student union marched through Harvard Yard shouting "no contract, no peace," approximately 30 others huddled inside University Hall, echoing back their chants.

Over the course of more than 10 hours, members of the Harvard Graduate Students Union–United Automobile Workers and their supporters protested, calling on the University to include third party grievance procedures, pay raises, and wider ranging health insurance benefits in their contract. At the same time, union organizers staged a five-hour sit-in at University Hall, an administrative building.

The protests marked the first anniversary of the union's official certification by the National Labor Relations Board — which officially fell April 30. It also coincided with International Workers’ Day, celebrated May 1.

Union supporters and organizers started gathering around Massachusetts Hall at 8 a.m., while another group of HGSU organizers entered University Hall for the sit-in.

Inside University Hall, Harvard University Police Department officers stood in front of the entrance to the restroom, blocking students’ access to the bathroom, according to Patricia N. Manos, a student in the Graduate School of Arts and Sciences who participated in the sit-in.

“It definitely made people uncomfortable,” Saul A. Glist ’22, an organizer for the Student Labor Action Movement who participated in the sit-in, said of the bathroom situation. “And definitely, if we had stayed longer, people would have had to leave for that.”

HUPD spokesperson Steven G. Catalano did not respond to multiple requests for comment.

This is not the first time HUPD has blocked entrances to bathrooms during sit-ins at University Hall. When fossil fuels divestment activists occupied the building in 2015, HUPD took similar measures.

Up to seven HUPD officers monitored the protesters outside throughout the day, but did not otherwise engage with the demonstration.

Several individuals participated in a sit-in at University Hall in support of the Union March happing right outside the building. By Ryan N. Gajarawala

Once the protesters emerged from the building, Caleb S. Weinreb, a Ph.D. candidate in Systems Biology who participated in the sit-in, told the group outside that they occupied the building because “we can’t wait any longer.”

He said that none of the participants “withheld” their work today, but he said that if the University fails to adequately address the union’s concerns, the union will authorize a strike.

“We will organize for a strike if they don’t take us seriously,” Weinreb said. “We’re here because it’s been too long and time’s up.”

Nearly 500 people participated over the course of the day, according to longtime union organizer Niharika N. Singh. At any given time, there were between 30 and 40 people marching in circles around the Yard and John Harvard statue.

The union’s sit-in was an “unusual tactic” to put pressure on Harvard, according to former Chairman of the National Labor Relations Board William B. Gould IV.

“It's not unheard of. It has happened in recent years as well as during the Great Depression,” Gould said. “But it doesn't usually happen in the course of negotiations.”

Gould added that the sit-in will likely not have legal repercussions for the bargaining process itself, according to Gould. 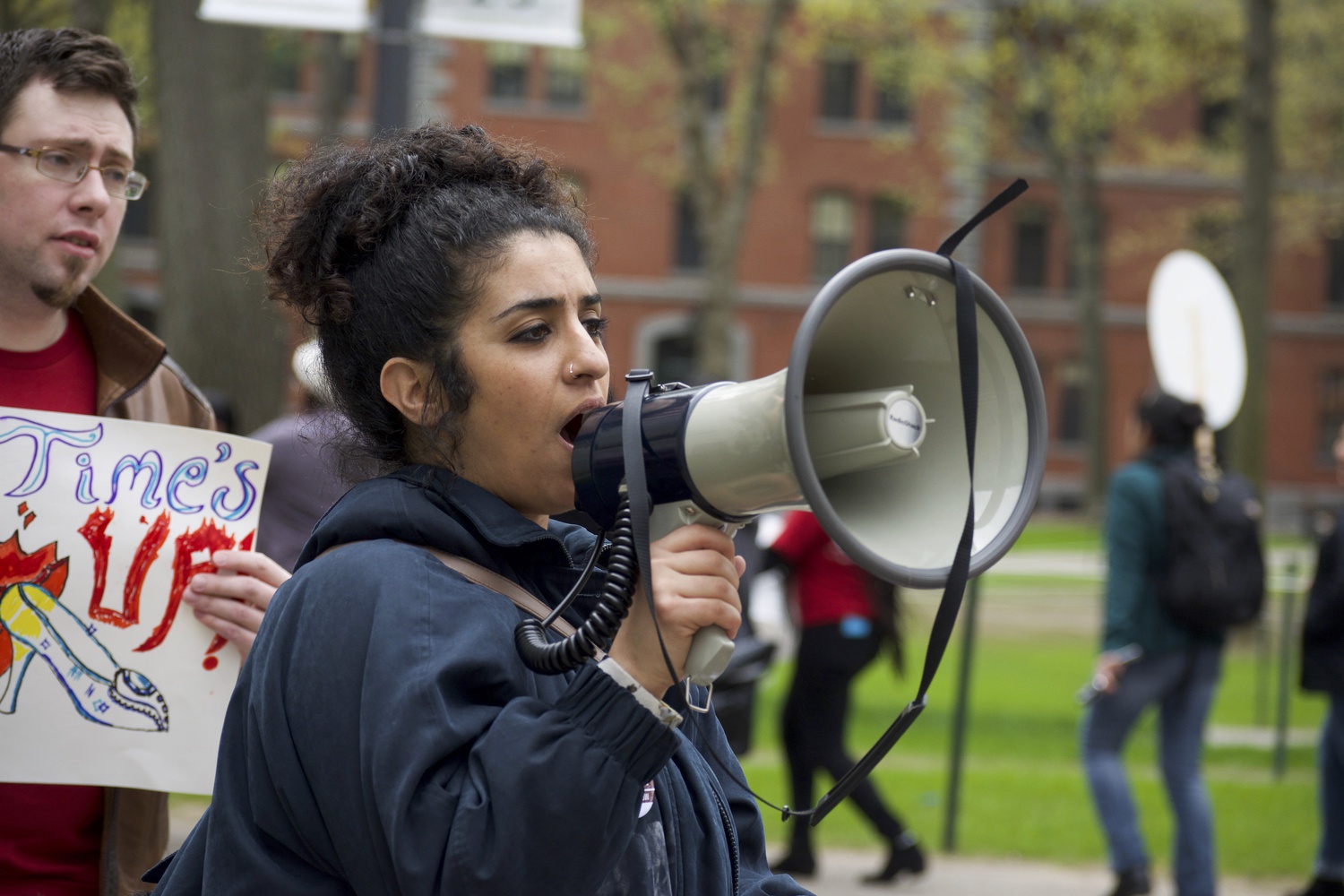 A protester speaks to the crowd as she leads the crowd on their march in Harvard Yard. Protestors sang organized chants during the march. By Amanda Y. Su

State Representative Marjorie Decker spoke before the marchers around 11 a.m. Members of campus activist groups including Divest Harvard — an organization pressuring Harvard to divest from its holdings in fossil fuels — also gave short speeches in support of the marchers throughout the day.

The march drew support from other labor groups at Harvard and around the Boston area. Members of the Harvard Union of Clerical and Technical Workers, Service Employees’ International Union Local 32BJ, and UNITE HERE Local 26 joined the march.

“We had very little interaction with anyone inside the building,” Modak said.

Modak said HUPD officers did not try to remove the group, and that the officers were generally “very respectful.”

Glist said that once the group was inside, some of them studied, took naps, and even “played catch with a little foam ball.”

Bargaining committee member Cole M. Meisenhelder said that in the wake of the march, the union expects “serious responses” from the University in their next bargaining session Tuesday.

Swain wrote in an emailed statement that the University remains “fully engaged” in negotiations.

“The University feels both sides are bargaining in good faith and remains committed to achieving a contract that is good for HGSU-UAW and the University as a whole,” Swain wrote.