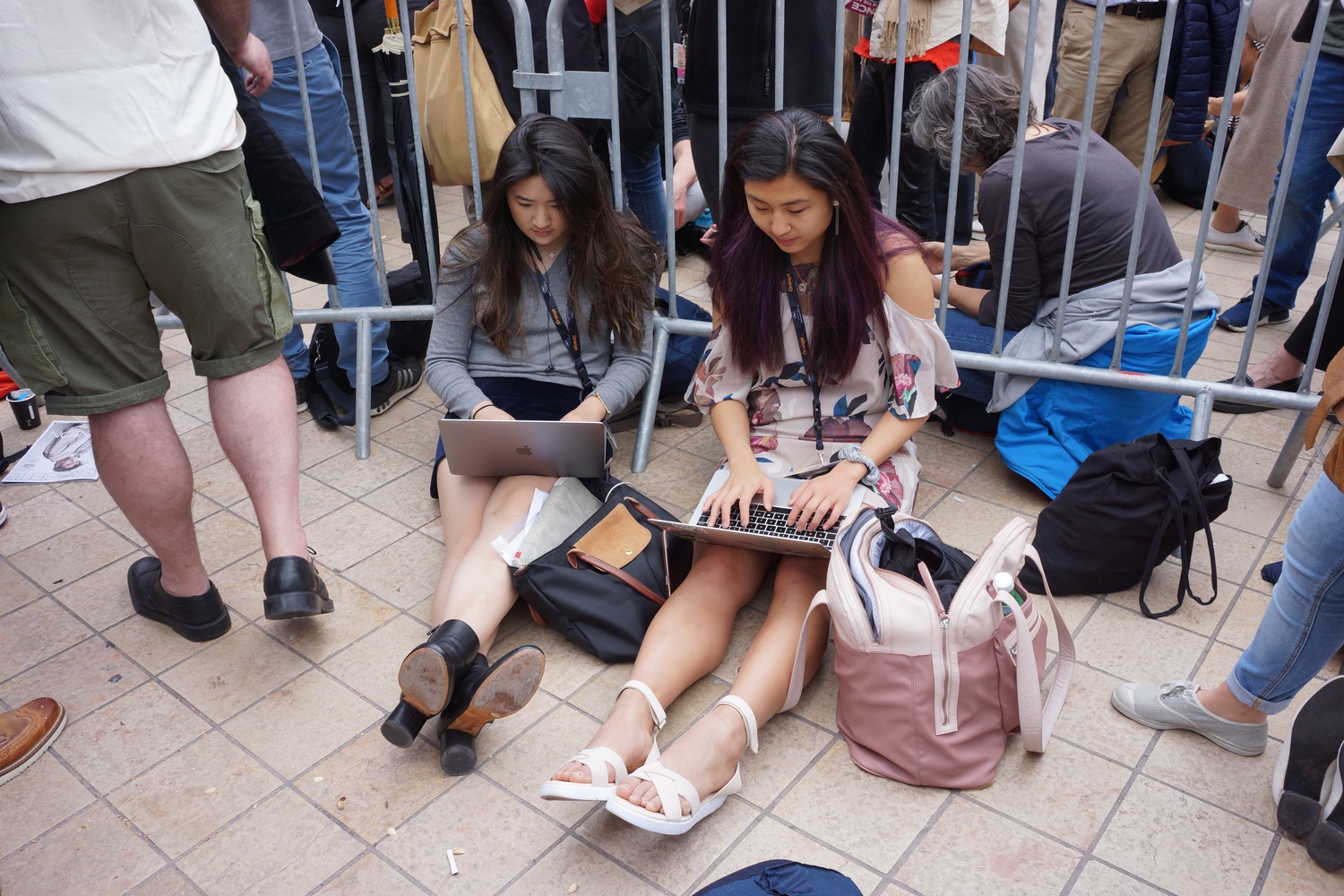 Waiting outside the Palais for "Once Upon a Time...in Hollywood." Spoiler alert: We didn't get in. By Caroline A. Tsai
By Kaylee S. Kim, Crimson Staff Writer

As I was sitting on the ground outside of the Palais (in a skirt), waiting for the pre-screening of Quentin Tarantino’s “Once Upon a Time...in Hollywood,” I took in the sheer homogeneity of journalists: Almost everyone was white and/or male (and smoking a cigarette). And almost as soon as I had noticed, an elderly French journalist asked where I “came from.” I responded, “The United States,” to which she clarified, “No, before that.” (Before... I was born?) I’ll give her brownie points for her original choice of words, I suppose, but more than personally attacked I just felt disillusioned: These are the people who are reviewing films made by Asian directors at Cannes. I’m not sure why people were particularly interested in my ethnicity today, but this exchange happened two more times — a record I could definitely do without.

Two hours later, Lucy and I were told that we’re not good enough to get into the screening — okay, not really, but that’s essentially the experience of someone with a yellow press badge — so we moved inside to wait for a later screening. Another two hours later, and surprise! We don’t get into this one either. The people love Tarantino, but Tarantino, why don’t you love us back?

By then it was already 6 p.m., and neither of us had seen a film because we devoted all day trying to get into this one. Later that night Lucy saw Ira Sachs’ “Frankie,” while I watched Bong Joon Ho’s “Parasite,” which I had been waiting all week to see. It lived up to my expectations in the weirdest of ways, and I returned back to our Airbnb past midnight to start writing my review.

Two things have somewhat made up for today’s bumps: the pups and the celebrities (and the films, of course, but that’s a given). The dogs here are so small, so cute, and so French — as Kyle Buchanan from the New York Times tweeted, “These dogs don’t woof... they woeuf.” I’m also happy to report a spike in celebrity sightings: I saw Robert Pattinson and Willem Dafoe after the premiere of “The Lighthouse” on Sunday, and it’s really a shame that it isn’t up for any awards because Rob definitely would’ve had a chance at Best Actor. The next day I ran into the infamous Gaspar Noé, who surprisingly decided to show up to the press screening of his “Lux Aeterna” but unsurprisingly was nonchalantly smoking a cigarette while being attacked by journalists. (A particularly shameless American yelled, "Hey Gaspar! Thanks for making the best film at Cannes, man.” Why do Americans have to fulfill the stereotype of being loud and tactless?) And today when Tilda Swinton walked past me, I took in all of her ice queen beauty.

Now that we’re over halfway through the festival, I’m feeling a mix of sadness and relief. I don’t want to leave, but I also desperately need to be brought out of my cycle of sleep deprivation. There’s no moment like the present, though, so I’ll definitely be cherishing my last few days in the south of France. Here’s to seeing more dogs, finally seeing “Once Upon a Time...in Hollywood,” and asserting that I am, indeed, from the United States.