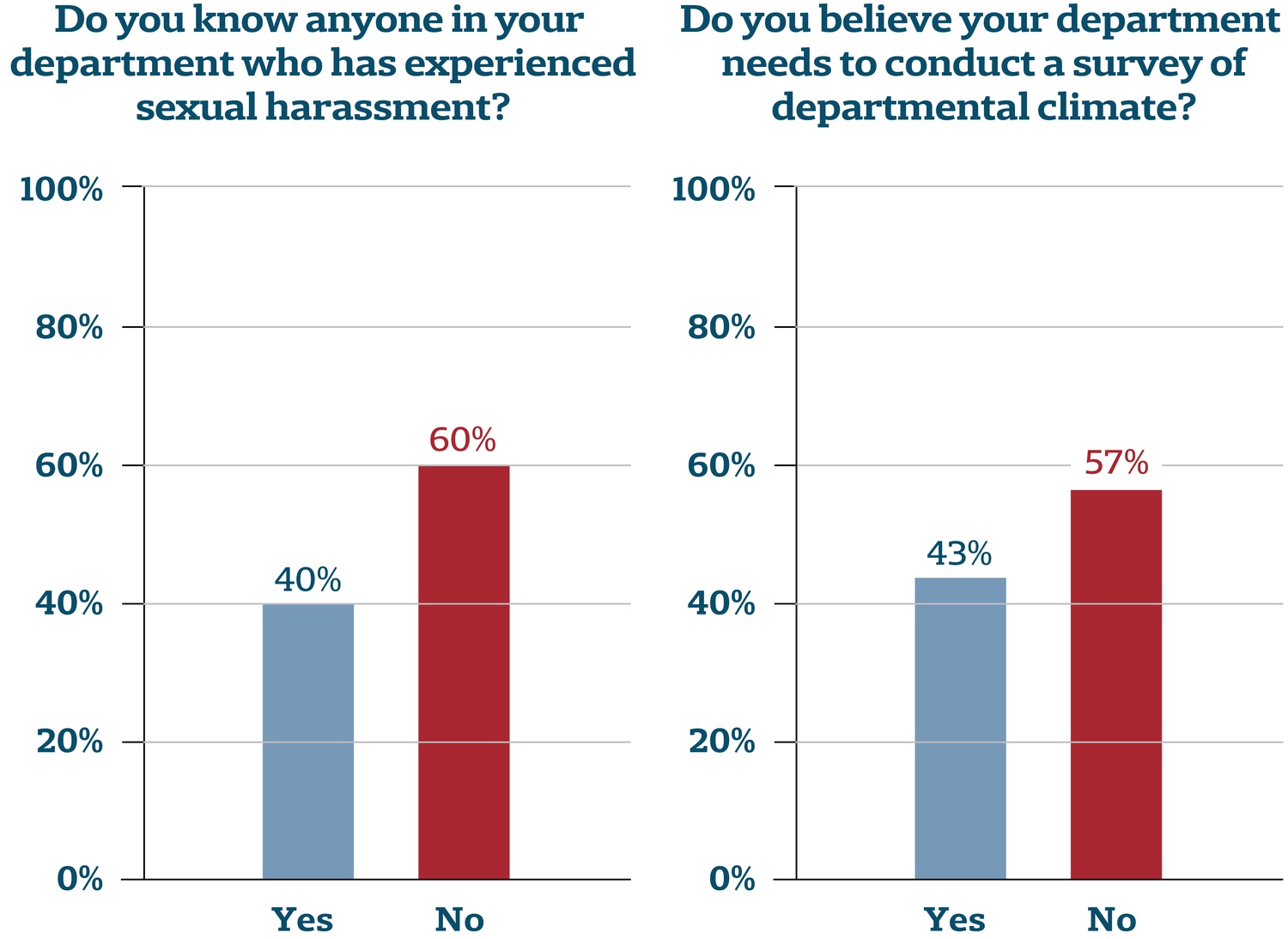 Roughly forty percent of surveyed faculty who replied to a Crimson questionnaire said they know someone in their department who has experience sexual harassment. By Camille G. Caldera
By James S. Bikales, Crimson Staff Writer

Forty percent of respondents to a Crimson survey of Harvard’s Faculty of Arts and Sciences indicated that they know someone in their department who has experienced sexual harassment.

At the same time, just 32 percent of survey-takers felt the University’s Title IX office and Office for Dispute Resolution are “adequately equipped” to deal with sex- and gender-based discrimination at the University. Harvard maintains a University Title IX Office to provide education and resources on Harvard’s gender and sex-based misconduct policies, and the Office for Dispute Resolution to adjudicate formal complaints.

A significantly higher percentage of female survey respondents than male respondents indicated that their work at Harvard has been limited by their gender. While 47 percent of women reported encountering obstacles because of their gender, only seven percent of men said the same.

Harvard saw a jump in sexual harassment complaints after the #MeToo movement began in late 2017 — including some against its faculty members. The University has launched a number of institutional efforts to combat sexual misconduct on campus in recent years, but The Crimson’s survey results indicate that faculty’s experience with such issues remains mixed.

The Crimson distributed its faculty survey to more than 1,000 members of the FAS in late February, polling Harvard’s flagship faculty on key University policy decisions, pressing issues on campus, and challenges they face as academics. Emeritus, tenured, tenure-track, and non-tenure-track faculty all received the survey.

The 74-question survey garnered more than 400 responses, though not all respondents answered each question. The anonymous survey, a link to which was emailed to nearly every member of the FAS, was open from Feb. 20 to 27. The Crimson did not adjust the data for possible selection bias.

The first and second installments of The Crimson’s 2020 faculty survey series explored faculty perspectives on national politics and the University administration, respectively. This third installment examines the views of the faculty on Harvard’s climate and culture, and on Title IX issues within the FAS.

The majority of faculty who responded to the survey — 58 percent — felt their department creates an environment where students, faculty, and staff feel “comfortable coming forward” about sexual harassment. Fifty-four percent of women and 61 percent of men agreed with the statement.

Still, 43 percent of respondents indicated that they believed their department needs to conduct a survey of departmental climate.

Twenty-four percent of respondents indicated that their work has been limited by gender. Only 11 percent said that they faced barriers at Harvard because of their “racial or ethnic background.”

Answers to the questions on diversity also varied between FAS members of different ranks. A slight majority of tenured faculty — 52 percent — felt the FAS administration’s efforts to support diversity were sufficient — but less than 26 percent of lecturers, associate professors and preceptors agreed.

Sixty-nine percent of tenured respondents felt that their department was doing enough, but only 32 percent of preceptors agreed.

In response to The Crimson’s survey results, University spokesperson Jonathan L. Swain pointed to a question Harvard’s 2019 Pulse Survey, in which 65 percent of academics and faculty members “somewhat agreed, agreed or strongly agreed” that Harvard’s leaders would take “appropriate action in response to incidents of harassment and discrimination.”

Additionally, a write-in question on The Crimson’s survey asked respondents to identify “specific aspects” of their department or division’s culture that they believed needed to change. The most common answer was improving working conditions for non-tenure-track faculty — in particular, reconsidering placing time caps on their employment contracts. In addition, several respondents called for increased faculty diversity and a wider variety of pedagogical perspectives.

In May 2019, after a year-long investigation into Title IX complaints against Dominguez, Faculty of Arts and Sciences Dean Claudine Gay stripped him of his emeritus status and barred him from campus.

After the allegations became public, graduate students, faculty and some of the women who accused Dominguez repeatedly called on Harvard to initiate an independent, external review of the circumstances that allowed Dominguez to perpetrate misconduct. University President Lawrence S. Bacow ultimately agreed to the demand in May, and the review began in September 2019.

Three percent of respondents indicated that they had been contacted by the external review committee.

A slightly smaller majority of survey-takers, meanwhile, supported the sanctions against star Economics professor Roland G. Fryer, Jr., who Harvard and the Commonwealth of Massachusetts began investigating in 2018 for verbal sexual harassment towards employees at his lab.

Sixty-six percent of respondents agreed with Gay’s sanctions against Fryer, including 33 percent who “strongly agreed.” Five percent disagreed, and 29 percent neither agreed nor disagreed.

The majority of survey respondents — 62 percent — agreed that the Harvard Corporation should revoke tenure if a faculty member is found guilty of sexual misconduct by the Office for Dispute Resolution. Opinions diverged, however, along lines of gender and position.

Responses between the youngest and oldest age groups surveyed starkly differed. Among respondents who were 25 to 35 years old, 81 percent agreed with the sanctions. Among faculty 65 and older, meanwhile, only 36 percent agreed.

For its 2020 Faculty Survey, The Crimson collected electronic responses through Qualtrics, an online survey platform, from Feb. 20 to 27, 2020. A link to the anonymous survey was sent to 1,341 FAS and SEAS faculty members through emails sourced in October 2019 from Harvard directory information. The pool included individuals on Harvard’s Connections database with FAS titles, including emeritus, tenured, tenure-track, and non-tenure-track faculty.

Of those faculty, 476 accessed the link to the survey. A total of 416 participants answered at least one question, while 263 participants completed every question in the survey.

Of faculty who were sent the link to the survey, 127 — or 9 percent — are affiliated with SEAS. In comparison, of respondents who indicated their divisional affiliation on the survey, 7 percent reported an affiliation with SEAS.