Everyone Needs to Watch the 'Frozen 2' Documentary 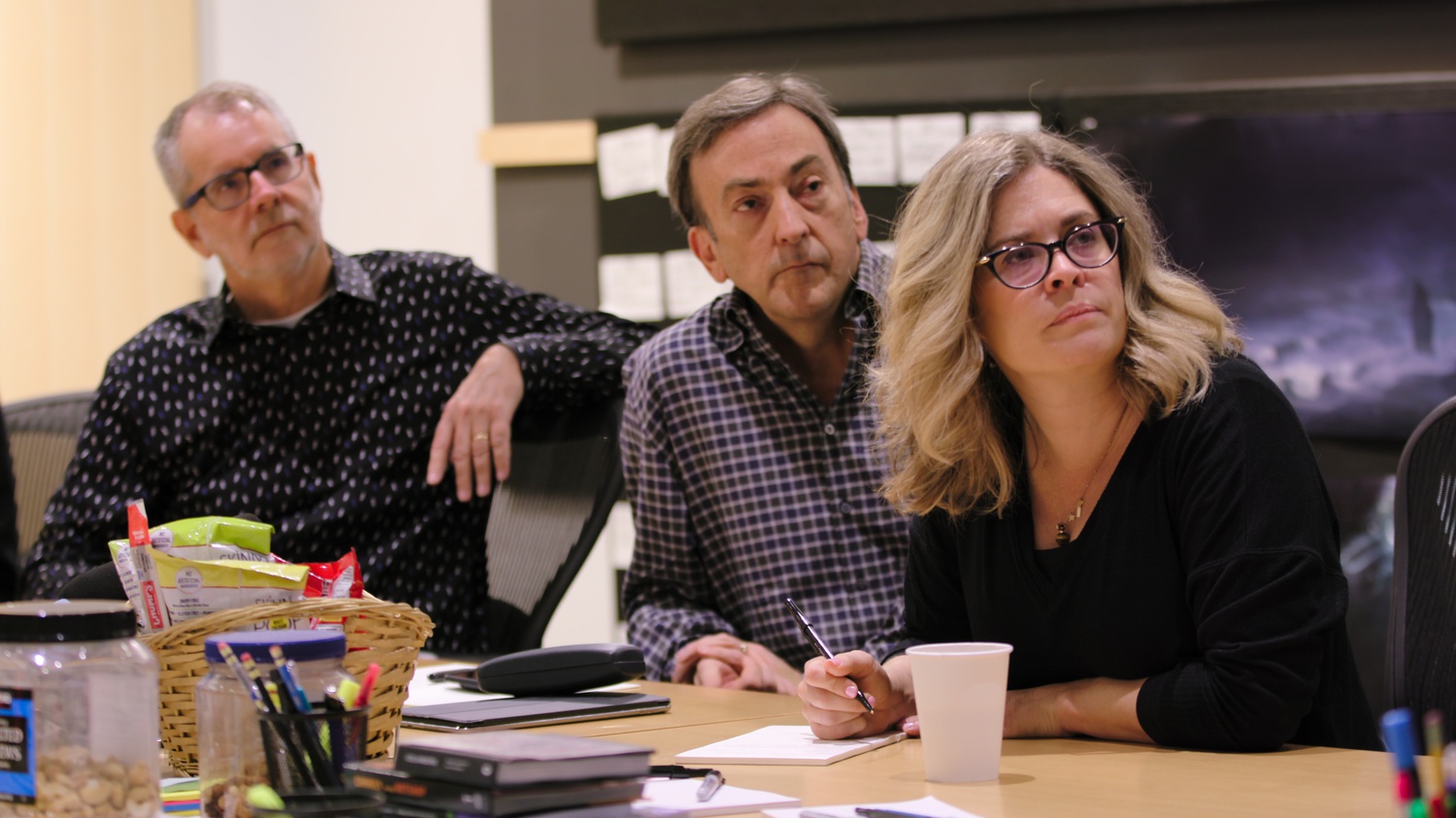 At the center of the documentary are (from left to right) "Frozen 2" co-director Chris Buck, producer Peter Del Vecho, and co-director and writer Jennifer Lee. By Courtesy of Disney
By Kalos K. Chu, Crimson Staff Writer

It could be argued that this review does not need to exist. The audience for a six-episode docu-series about the making of "Frozen 2" is probably already pretty small (both in numbers and actual physical size) and the subsection looking for a critic’s take, smaller still.

But why is that?

"Frozen 2" is the highest grossing animated film of all time, yes, but it was also the third-highest grossing film of 2019 and is the tenth-highest grossing film ever. It outsold saga-concluding blockbusters like “Star Wars: The Rise of Skywalker” and Marvel juggernauts like “Captain Marvel” — yet, it is seldom treated with the same seriousness and acclaim as its live-action companions.

This is understandable. There’s a tacit understanding among moviegoers that an animated movie — no matter how spectacular — is still “just a kids movie.”

Now, in the most objective opinion of this reviewer (for whom, in the spirit of full transparency, this will be the third “Frozen 2”-related piece he’s written for The Crimson), this is misguided. Animation is serious business. And this seems to be the implicit thesis of “Into the Unknown: Making Frozen 2”: that “Frozen 2” is more than just magical snowmen and ice puns, that it’s a complex and thoughtful film about love, grief, and spirituality, and — most importantly — that it was created by unbelievably talented people who care so, so much.

The docu-series begins one year before the movie’s November 2019 premiere and follows the cast and crew of “Frozen 2” through the final leg of the movie’s production. Director and writer Jennifer Lee and her co-director Chris Buck are at the heart of the documentary, and surrounding them are the 400-plus people at Walt Disney Animation Studios who made the film possible — among them, story director Marc Smith, producer Peter Del Vecho, and songwriting duo Kristen Anderson-Lopez and Robert Lopez.

It’s interesting to see the process through the lens of Lee and Buck who, through frequent interview clips, serve as the de facto narrators for the documentary. Seeing them crack up when Josh Gad riffs on an Olaf joke or get teary-eyed as the orchestra hits the crescendo on “Into the Unknown” is humanizing; it reaffirms that yes, they may be Oscar-winning directors, but they’re also real people.

They also provide a layer of analysis on the movie, an English-professor-style close reading on how Anna’s act two solo is an allegory for depression or how Elsa’s dress transformation symbolizes her newfound connection with nature. It’s the type of analysis that is needed not because the film is exceptionally complex, but because viewers don’t think of a Disney movie as needing analysis, as being thoughtful enough to have a deeper meaning — hence, this documentary.

There’s never any actual tension, no points at which the viewer is on the edge of their seat waiting for some big bombshell setback. There are moments when the documentary ventures into suspenseful territory: Episode three, for example, depicts a tense meeting about “Show Yourself,” Elsa’s big cathartic solo number that they just can’t get quite right. But the issues are never major and the viewer is never left nervous for long. Disney, it seems, can’t shake its signature tendency to present only the clean, polished version of a story.

This isn’t necessarily a bad thing. What we get, instead, is a smorgasbord of behind-the-scenes footage. Animators tinkering with half-rendered models of Olaf. A full 80-piece live orchestra playing the score for “Into the Unknown.” Kristen Bell and Idina Menzel and Josh Gad and Jonathan Groff recording take after take after take — all in high-definition 1080p. For “Frozen 2” fans, it’s four hours of straight visual dopamine.

But these clips are more than just pretty pictures, they’re windows — glimpses into the countless man-hours that go into making a film like “Frozen 2” beyond those of the directors and actors. “It’s actually crazy that, you know, we work on these movies for like a year or two years,” says Malerie Walters, animator, “and we finish the movie with only about a minute to two minutes of the actual film to show for it.” That’s insane! And the documentary is filled with Maleries! Sound designers and technical animators and visual effects artists who spend years working on the pattern on Elsa’s dress or Olaf’s right foot. It’s a testament to the fact that there are real people — so many people — behind every frame, and a wake-up call to anyone who underestimates the thought and effort put into Disney animated films.

There’s this scene where a production supervisor lugs this big stack of papers to the workroom and begins feeding them into a shredder. “Goodbye, ‘Show Yourself’ version 2,041. Goodbye ‘Show Yourself’ 3,062,” she says as she shreds hundreds of pages of old storyboards. “It’s really a testament to how much blood, sweat, and tears it takes.” It’s a testament, too, to all the work that’s never seen, all the shots that can’t fit into a 1.75-hour movie, all the names in the credits that scroll by before you can read them.

That’s what this documentary is — an attempt to illuminate that work, to give all of those shredded names and drawings and people their time in the spotlight and, ultimately, to remind us that “Frozen 2” is far more than “just a kids movie.”