For Some Low-Income Students, Harvard Plan Presents a Fall Semester They Can ‘Barely Afford’ 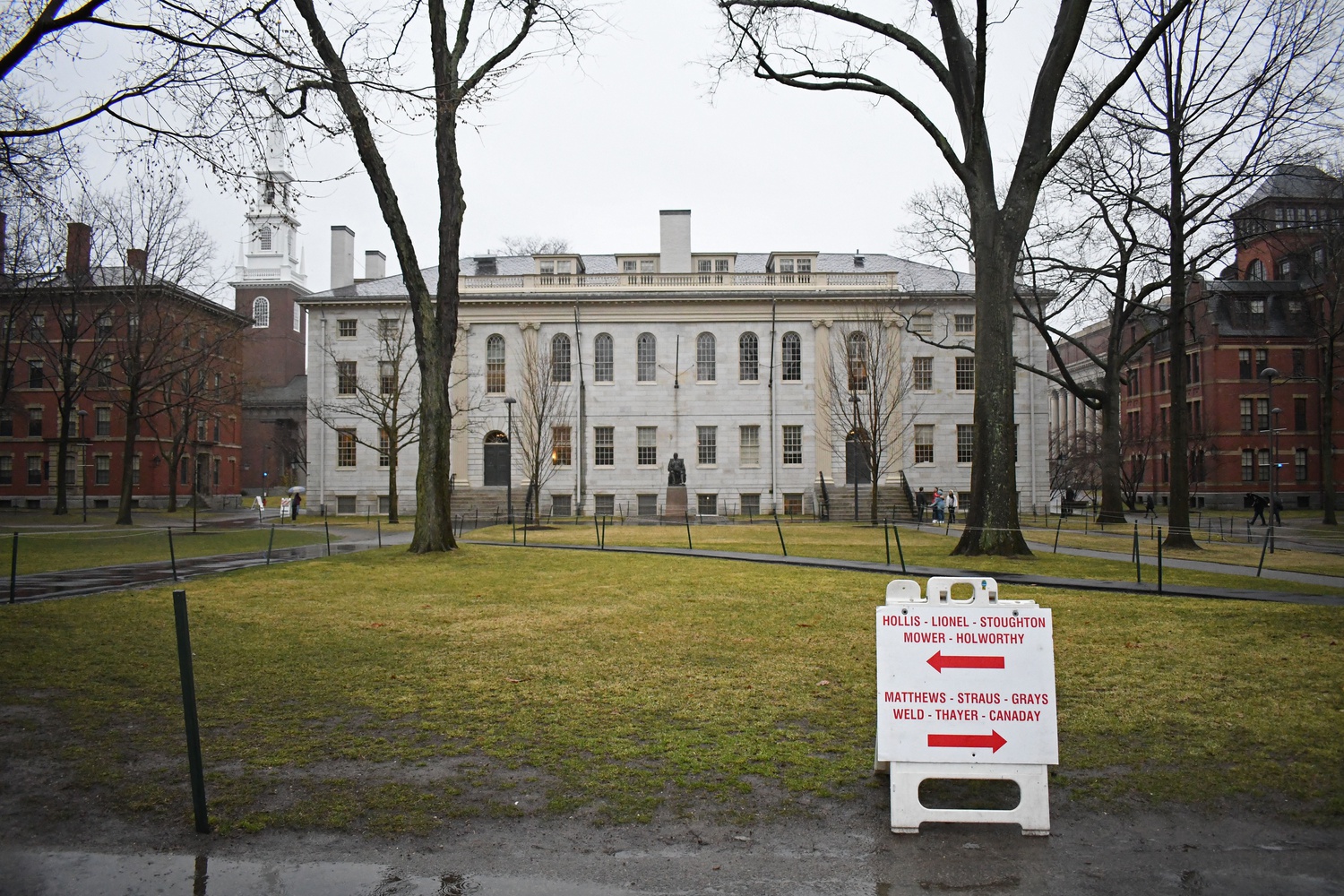 In the aftermath of Harvard College’s fall planning announcement, undergraduates have agitated against Harvard’s decision to maintain tuition rates for its now entirely remote course offerings and have charged the College with failing to support low-income students.

Administrators announced Monday that Harvard would house no more than 40 percent of undergraduates — including freshmen and upperclassmen who successfully petition for residency — in Cambridge for the fall semester. Regardless of whether they reside on campus or not, all enrolled students will take virtual classes.

Students immediately took to Twitter, Facebook, and other platforms to scoff at the nearly $50,000 price tag on their virtual Harvard experience, questioning the high costs without on-campus perks and resources. Tuition for the full 2020-2021 academic year is set at $49,653, marking a four percent increase over last year’s $47,730, not including room, board, and other fees.

Undergraduates on financial aid further decried what they characterized as limited institutional support, as well as confusion over storage and leave of absence policies.

“So we're off campus — the majority of us — without the campus resources, and we're still paying 50-plus thousand dollars,” Miller said. “Oh, and you also increase tuition $2,000 a year. Please make it make sense.”

“Sure, there's probably some value in learning public speaking via Zoom, but is that going to be the same as learning how to publicly speak to a group of people? Or taking a Theater, Dance, Media class or a film class?” Kumar said. “Sure, they can ship you a camera, but without being able to go out into campus and work with the professor, I just don't see how you can gain any concrete knowledge just based on reading a textbook or watching a video online.”

Kumar created a petition shortly after Harvard’s announcement on Monday calling on the College to reduce its tuition fees for the fall semester. The petition had garnered more than 600 signatures as of Tuesday evening.

Several undergraduates further questioned why tuition rates per class should be greater for College students than at the Harvard Extension School, which provided many courses online prior to the pandemic.

Several other students referenced additional financial concerns about Harvard’s approach to reopening in the fall that could disproportionately disadvantage low-income students.

Though Harvard has committed to calculating students’ financial aid award with a “COVID-19 Remote Room and Board” allowance of $5,000 per semester and relieving them of their term-time work expectation this fall, many low-income undergraduates said they felt these measures insufficiently addressed their needs.

Prior to learning that Harvard would only welcome freshmen and some upperclassmen back to campus in the fall, Abrar Trabulsi ’22 said she assumed Harvard would offer students receiving financial aid a stipend of around $10,000 a semester to supplant the usual costs of room and board.

Trabulsi, who said she is a low-income student, said she was considering renting an apartment using that allowance during the fall, but was shocked when she learned Harvard would grant only half that amount.

“There are some people who again don't have great housing situations and have very toxic and unstable home lives who were probably counting on this money to find a way to leave their homes,” Trabulsi said. “$5,000 is not enough in the United States anywhere to rent, pay for food and utilities. And with the COVID situation, it's not like you could get a part-time job because there are none. Millions of people are unemployed.”

Treasure F. Brooks ’21, who said she is on full financial aid, also said Harvard’s blanket allowance of $5,000 for all undergraduates receiving aid from the College fails to account for those students’ varying degrees of financial need.

“For some students on aid, this means you get 5,000 extra dollars, whereas the rest of us who deal with real world financial independence everyday will have to stretch that to cover their rent, groceries, internet for a full semester,” Brooks said.

“It's hard to believe that it was a thoughtful decision truly meant to support students who are facing financial hardship and not just used to quiet us,” she added.

Administrators wrote in their Monday email that the College will accommodate as many students who “must be on campus to progress academically” this fall as it can without going beyond the 40 percent threshold. It defined this cohort as students lacking adequate technology and internet, quiet work spaces, uninterrupted time to commit to their studies, and food and housing security, in addition to those with fraught family circumstances, among others.

Shavonna E. Jackson ’22, who also said she is on full financial aid, echoed the criticism that the $5,000 grant is insufficient to cover off-campus living expenses for low-income students who cannot live at home. Since her home environment is not conducive to focused study, she said she plans to petition Harvard to allow her back on campus — though she is wary of taking one of the limited spots from peers who might need it even more.

“It's really, really messed up that someone in a low-income position, in a place that is not really suitable for learning has to think about ‘Oh, people might have it worse than me. So maybe I should not apply for the housing,’” she said. “I know people who are completely homeless.”

Jackson suggested the College pledge to subsidize off-campus housing for students it cannot accommodate in its residential buildings.

“Giving them room is not enough,” she added. “How are people going to eat? Do you want people to just starve and take classes? I don't understand how they expect someone who's not functioning with a fully fed stomach to do well in classes. It's all intertwined.”

In the months spent anticipating Monday’s announcement, many College students mulled whether they would prefer to take a leave of absence rather than complete a full semester of classes online. For many students, the confirmation that Harvard would not permit most upperclassmen to return to campus in the fall solidified these plans.

While administrators have repeatedly assured students that Harvard would not change its leave of absence policies to deter leaves, they noted that the College could not necessarily guarantee students housing upon their return.

Trabulsi said she felt Harvard’s failure to promise students who take a leave of absence next semester housing when they return unfairly “coerces” low-income students to enroll in a semester of online classes while higher-income students can opt to take time off to avoid remote learning.

“For the low-income student who might not be able to adequately, successfully take classes online due to varying home situations and home instability, you're basically backing them into a corner,” Trabulsi said. “They’re going to have to choose to take the online classes knowing that if they take time off, when they try to return, they’re not going to be guaranteed housing.”

Jacob A. Heberle ’22 — who said he is partly responsible for providing for his family in Hawaii — similarly said a gap year is off the table for him, though time zone differences might undermine his academic experience. He said he knows he won’t be guaranteed housing upon his return should he take a leave and wouldn’t have the “energy or the time or the resources” to find his own place off-campus.

Heberle added that he has been working, cooking, and caring for his retired father since he returned home this spring.

“I think one of the things that sucks about this announcement is that it really just exposes socioeconomic disparities at Harvard. I mean, a lot of my friends are planning on maybe getting an apartment together,” he said. “It’s just an option that I can't even consider.”

“I have to be back here if Harvard's not going to take me in their dorm,” Heberle explained, citing tight finances and tuition he can “barely afford” otherwise. “Some students are going to be able to deal with this easier than others. The fact that the University isn't doing anything to give extra aid is just making this disparity worse.”

“I'm just gonna try to power through it,” Heberle added.

Another issue low-income students cited was that of shipping and storage. Students on financial aid said that they will incur prohibitive costs trying to get their belongings back and that Harvard’s pledged $175 subsidy would only make a small dent in the charge.

“[Storage is] like $100 a month and you want me to pay that for the next 10 months?” Jackson asked. “That's another thousand dollars.”

She added that shipping her heavy boxes of winter clothes home to California will likewise prove unbearably expensive.

“That is a major concern of mine, which is the reason why I would want to go back to campus or somewhere nearby,” she explained. “Storage is a big, big issue that a lot of people and a lot of schools just overlook.”

Immediately following Harvard’s release of its fall plans, a contingent of undergraduates mobilized to identify student concerns about the fall semester and draft petitions to administrators. Madison A. Trice ’21 created a group chat — now populated by over 200 — for students across grade levels to collaborate on advocating for disadvantaged students.

“I'm hoping we can get Harvard to do better by our community because everyone deserves to have their basic needs provided for,” Trice said. “It's a really special community and it deserves better.”

Students have lambasted Harvard’s efforts to support low-income students throughout its entire management of the coronavirus crisis and especially spring, when the College mandated that all undergraduates vacate campus within five days. Undergraduates argued that the administration effectively evicted its most vulnerable cohort, neglecting to ensure that they had food and housing stability, or internet connection and quiet study spaces, after they stepped off campus.

Brooks emphasized that her low-income peers’ woes surrounding the College’s policies were far from a problem that exists only at Harvard.

Brooks also said the challenges facing low-income students extend beyond Harvard’s responses to the COVID-19 pandemic. She urged students to identify and mitigate the existing inequalities that the coronavirus has only exacerbated.

“If this decision is framed in the context of COVID alone, then when COVID relief efforts hopefully succeed, this will end at some point,” she said. “But what does our community look like afterwards and what has changed?”