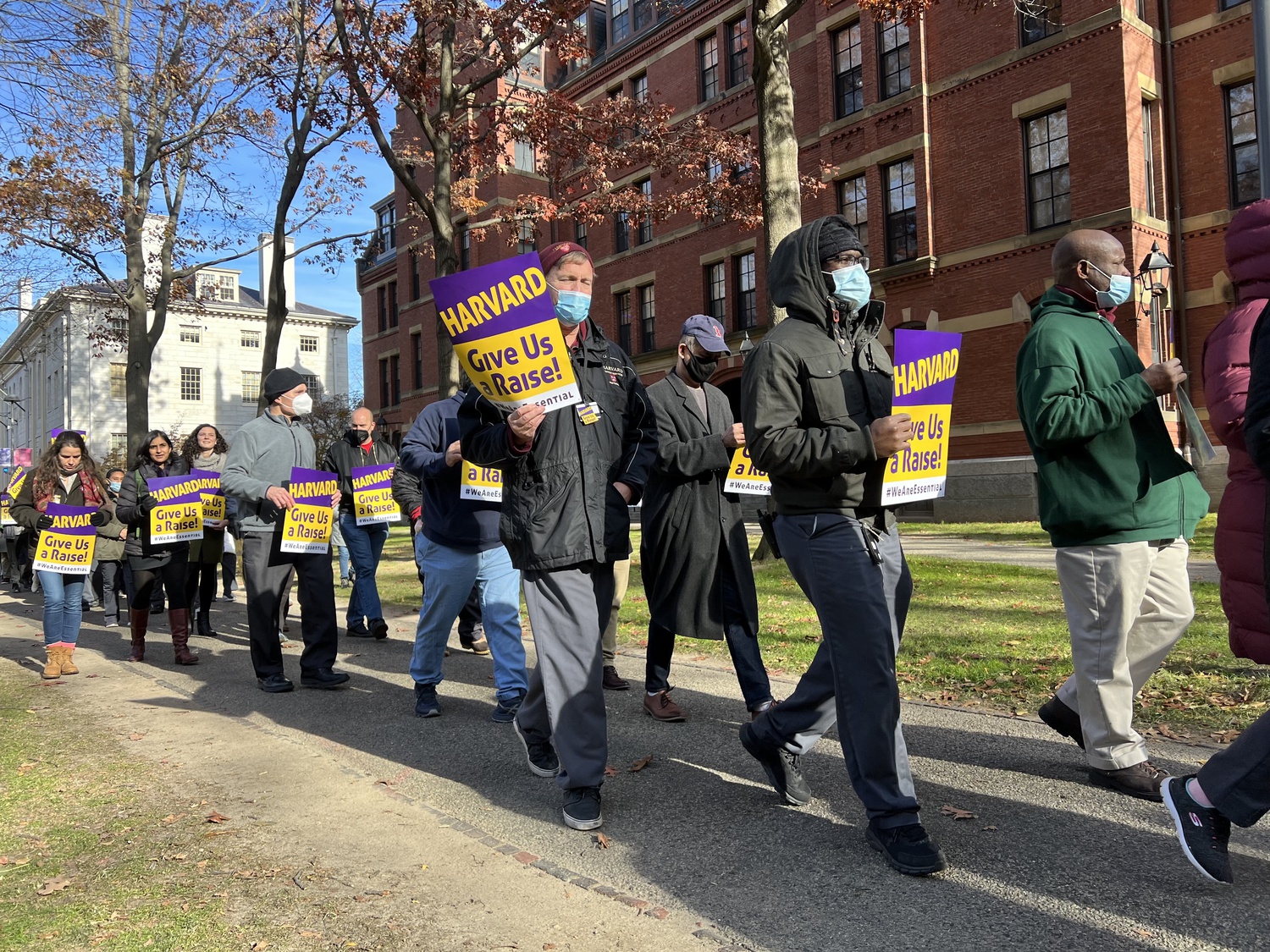 Harvard custodians and security guards held a rally on Nov. 30 to demand higher wage increases from the University. The custodians reached a tentative agreement with Harvard on Friday. By Meimei Xu
By Cara J. Chang and Meimei Xu, Crimson Staff Writers

If ratified, the contract will be in effect from Nov. 16 of this year to Nov. 15, 2025. The ratification vote will likely open the week of Dec. 13, according to Amanda Torres-Price, the spokesperson for the 32BJ Service Employees International Union, which represents Harvard’s custodians and security guards.

Under the agreement, Harvard will also continue to cover health care premiums for employees with the “Union Building 32BJ Health Fund,” contributing $1,402 per custodian in the new year.

Employees will also receive new or increased benefits, such as a MBTA transportation subsidy for third-party contract workers equal to the one directly-hired custodians receive, a $1.75 per hour increase to pay during less desirable shifts, and a $1.75 per h\our premium on shifts removing snow and a $1.25 per hour premium on shifts moving furniture.

The tentative agreement comes days after custodians, security guards, and 32BJ supporters rallied in Harvard Yard Nov. 30, calling for higher wage increases from the University. The union is still negotiating a contract for security guards at Harvard, who are employed by third-party contractor Securitas.

Last year, the custodians agreed to a one-year extension of their 2016 contract, which expired November 2020 and included a 12.5 percent wage increase over four years and “employer-paid healthcare.”

The 2020 extension included one-time bonuses and guaranteed that Harvard and third-party contractors would continue covering health care costs for custodians. Although 97 percent of voters agreed to ratify the extension, the contract did not include wage increases or provisions for contracted workers idled by the pandemic.

Harvard spokesperson Jason A. Newton wrote in an emailed statement Monday that the University is “pleased” with the new tentative agreement with 32BJ.

“This is a four-year deal that demonstrates Harvard’s commitment to a workforce that is crucial in the University’s mission of teaching, education and research,” Newton wrote.

In the past few months, several campus unions — the dining employees union, the clerical and technical workers union, and the graduate student union — have each ratified contracts with the University.