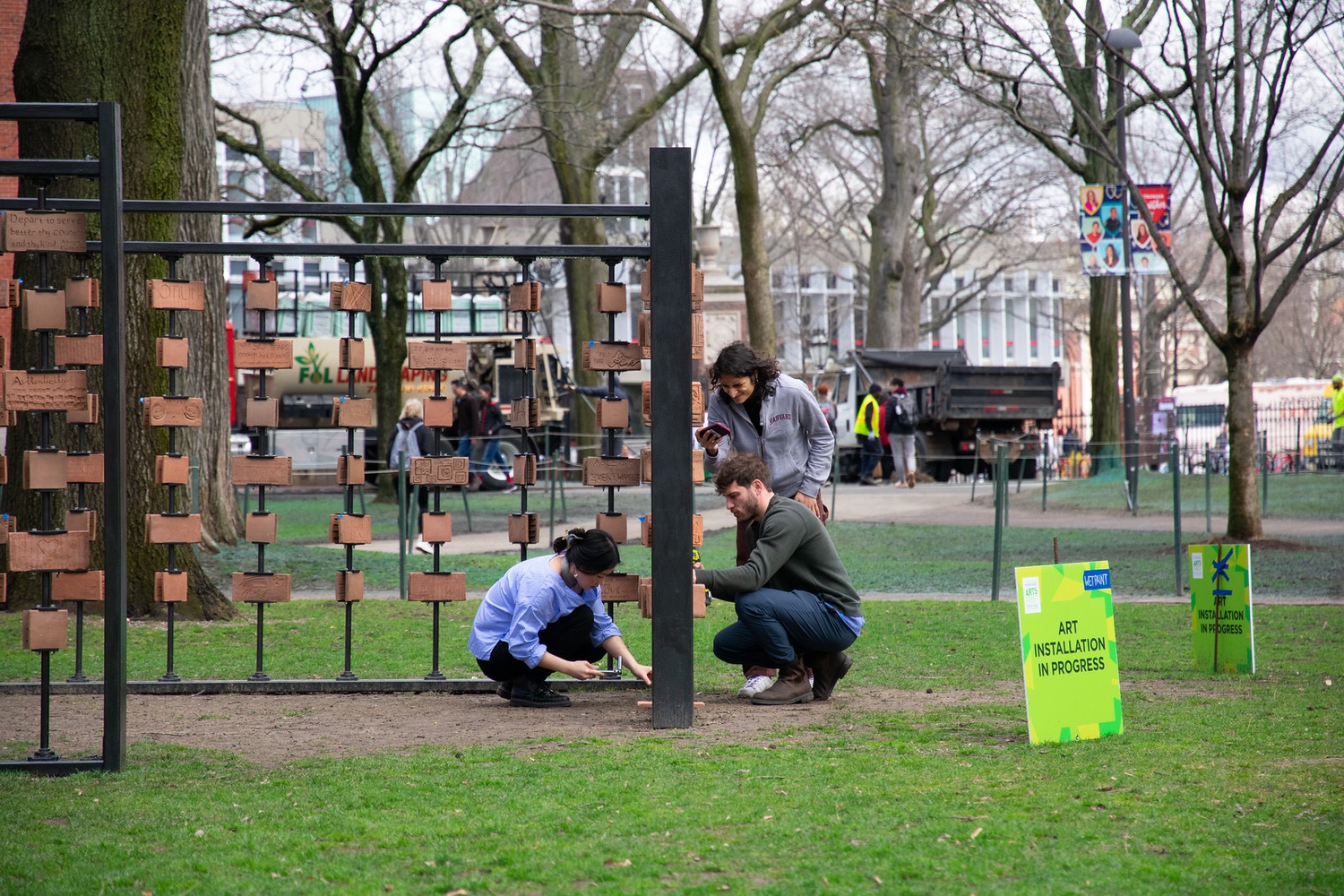 Throughout the month of April, student-carved bricks will sit in Harvard Yard as part of an art installation aiming to represent the role students play in shaping the University — from its physical campus to its academics, social life, and culture.

Juniors Kiana N. Rawji ’23 and Cecilia Y. Zhou ’23, who created the installation, discussed the display alongside professor Tracy K. Smith at a Tuesday event entitled “Inclusions: Envisioning Justice on Harvard’s Campus.” Organized as a part of the Presidential Initiative on Harvard and the Legacy of Slavery, the talk focused on the role of monuments as expressions of art and visual culture.

From fall 2021 to February 2022, Rawji and Zhou provided Harvard students with bricks on which they could write messages in response to the prompt, “If these bricks could speak, what would they say, about Harvard, about you?”

“We eventually settled on the idea of bricks as our foundational visual metaphor because it occurred to us that it is a built environment at Harvard that really kind of transcends the tenure of any particular student,” Zhou said Tuesday at the event.

Rawji and Zhou said they wanted to highlight diverse and varied responses to the prompt, encouraging students to express their genuine feelings.

“It was important to us to not pick and choose,” Rawji said. “We didn't censor any of the bricks. Every brick that was made is up on our wall.”

Zhou said they wanted their project to overcome “various shortcomings” in current monuments, which she said are often “vetted and determined by an authoritative body.”

“We were thinking about turning the idea of the public monument on its head and decentering it,” Zhou said at the event. “We wanted to give students the ability to speak for themselves and represent themselves as they want to be remembered.”

The project is the first of five public art installations that will be put on display next week as a part of the annual Arts First festival, which showcases hundreds of student performances and exhibitions over a period of four days.

“We were really interested in this idea of interrogating public memory, but also in cultivating public imagination,” Rawji said. “And we wondered what it would look like if you put student minds together to create something that stood for what we believe, what we found out as an institution, what we have valued, and where it has brought us — and that's brought us to bricks.”