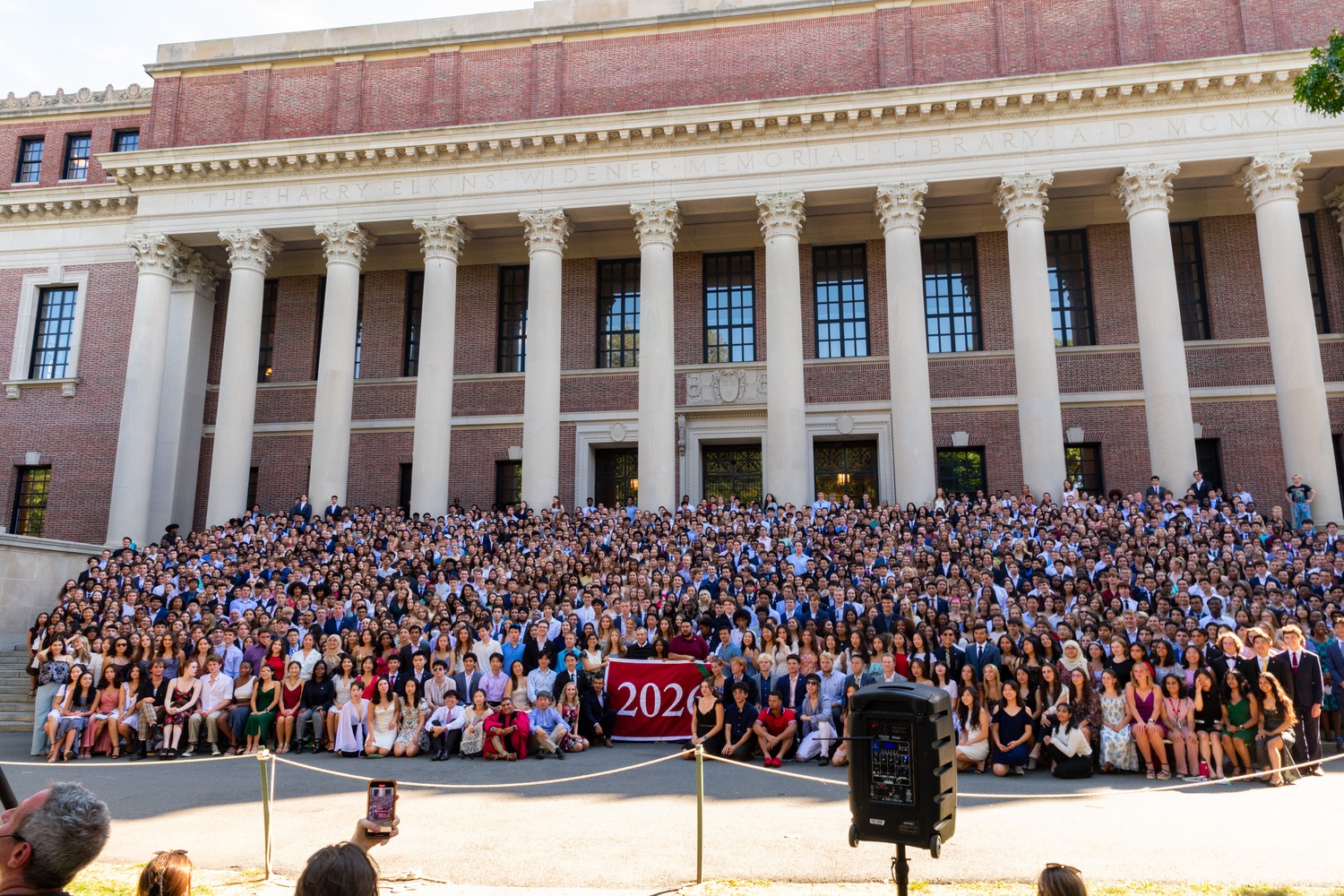 The Class of 2026 gathers for a photo on the steps of Widener library. By Julian J. Giordano
By Vivi E. Lu and Leah J. Teichholtz, Crimson Staff Writers

Hundreds of Harvard freshmen crowded into Tercentenary Theatre Tuesday afternoon for the College’s annual Convocation, which featured an address by University President Lawrence S. Bacow and a protest by the Palestine Solidarity Committee.

The ceremony, which welcomed 1,649 freshmen to the College, also included remarks from College Dean Rakesh Khurana and other top Harvard administrators. During the program, musical performances by the Kuumba Singers, Harvard choruses, and the Harvard University Band resonated through the Yard.

In his speech, Bacow — who will step down in June 2023 — advised freshmen to pursue truth by engaging with different perspectives.

“Our motto is ‘veritas,’ and it’s more than a motto. It’s the reason we exist, to seek the truth. But truth needs to be tested, needs to be revealed. And that can only happen on the anvil of competing ideas,” Bacow said. “It’s really, really important to engage with people who think differently from you.” 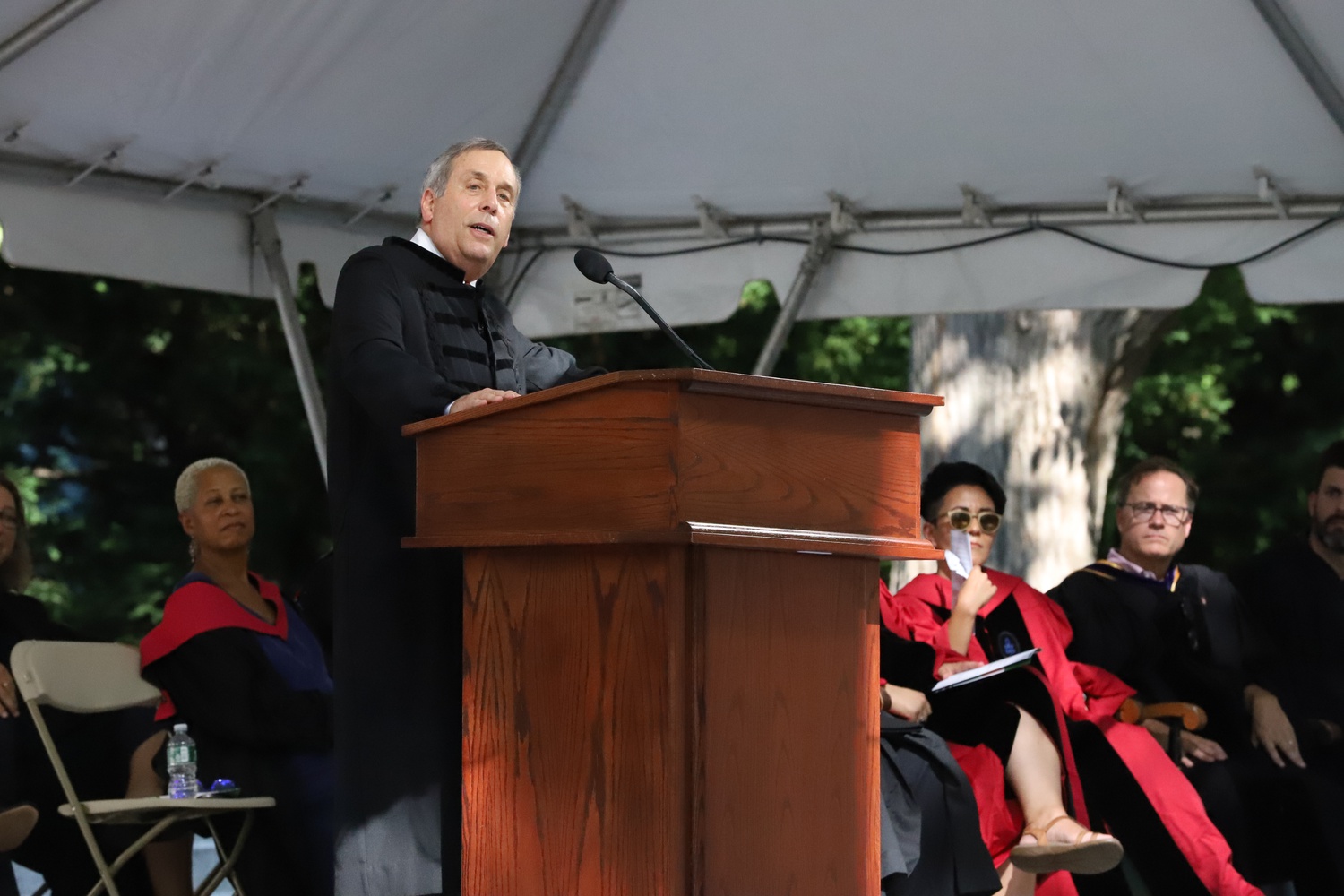 Khurana called on students in his address to take up the challenge of seeking truth even when it is difficult.

“Some of the most powerful obstacles to searching for the truth actually come from within us. One of these obstacles is the temptation to conform,” Khurana said. “The forces of conformity can be strong and work against our ability to seek answers to tough questions.”

“We need to ask those questions,” he added.

Following Khurana’s address, a group of student protesters from the Palestine Solidarity Committee chanted and displayed a poster that read, “Veritas? Here’s the real truth: Harvard Supports Israeli Apartheid.” Several protesters were stationed next to the freshmen throughout the ceremony. 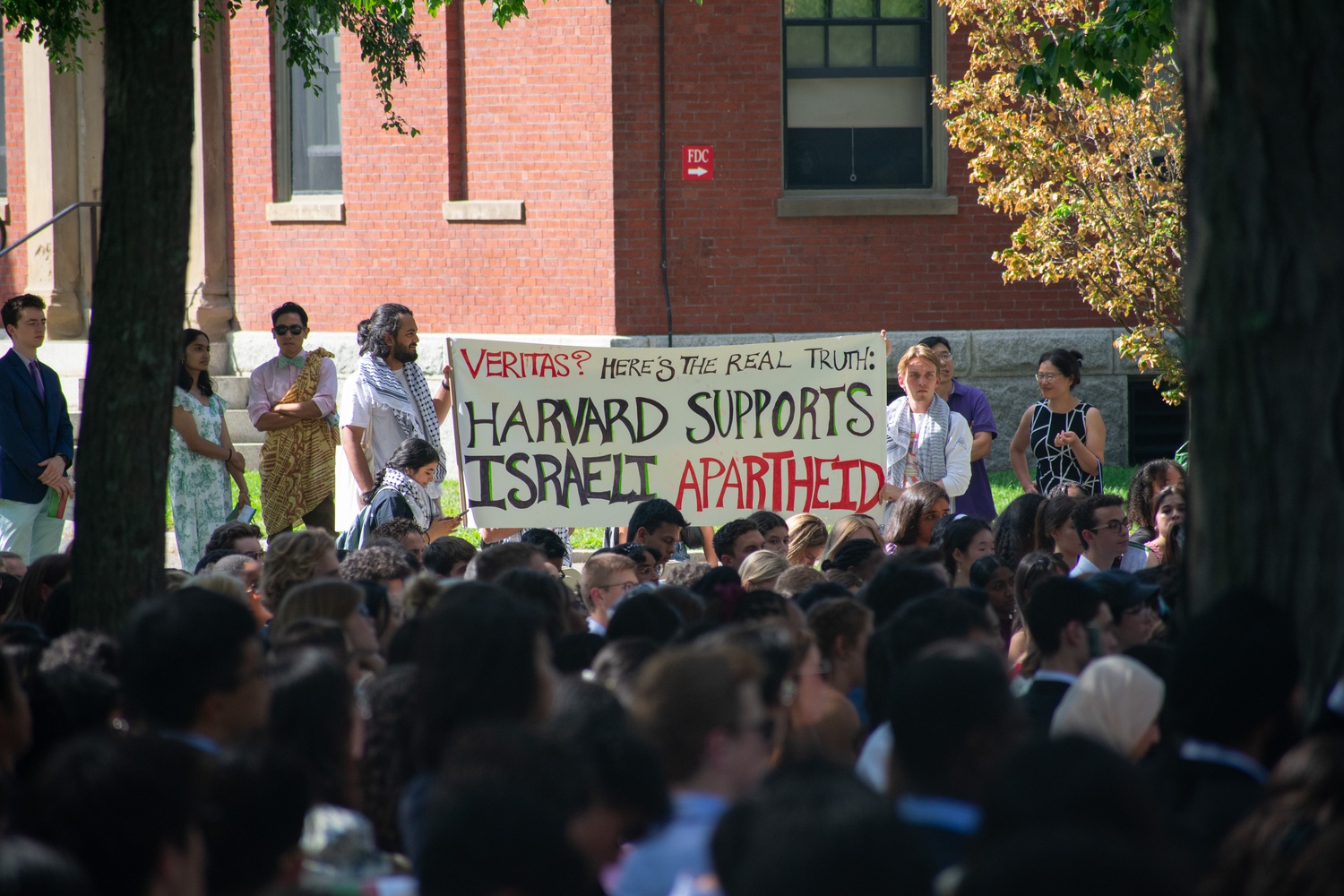 College spokesperson Jonathan Palumbo declined to comment on the protest.

“Beyond being unfortunate, such a display is also inadvertently ironic and terribly counterproductive,” Steinberg wrote. “Perhaps the best use one may make of such a moment is to lift up — by contrast to what we have just seen in the Yard — the nuance and the depth available to Harvard students through the programs of Harvard Hillel.”

In a statement to The Crimson following the protest and Hillel’s email, PSC member Joshua D. Willcox ’24 wrote that there is “no right time and place” to protest.

“We believe that we have the responsibility to leverage our education to hold Harvard accountable and condemn the oppression that it is actively involved in, especially when these actions are so contradictory to the values that the administration purports,” the statement read.

The ceremony also included an address from Dean of Students Katherine G. O’Dair, who used viral online game Wordle as an analogy for students’ transition to life at Harvard.

“I am not embarrassed to say that most of the time I am perfectly average at Wordle. But just like in life, I have my days of excellence and my days of frustration,” O’Dair said. “I ask that you grant yourself some grace when you don’t get everything absolutely right the first time.” 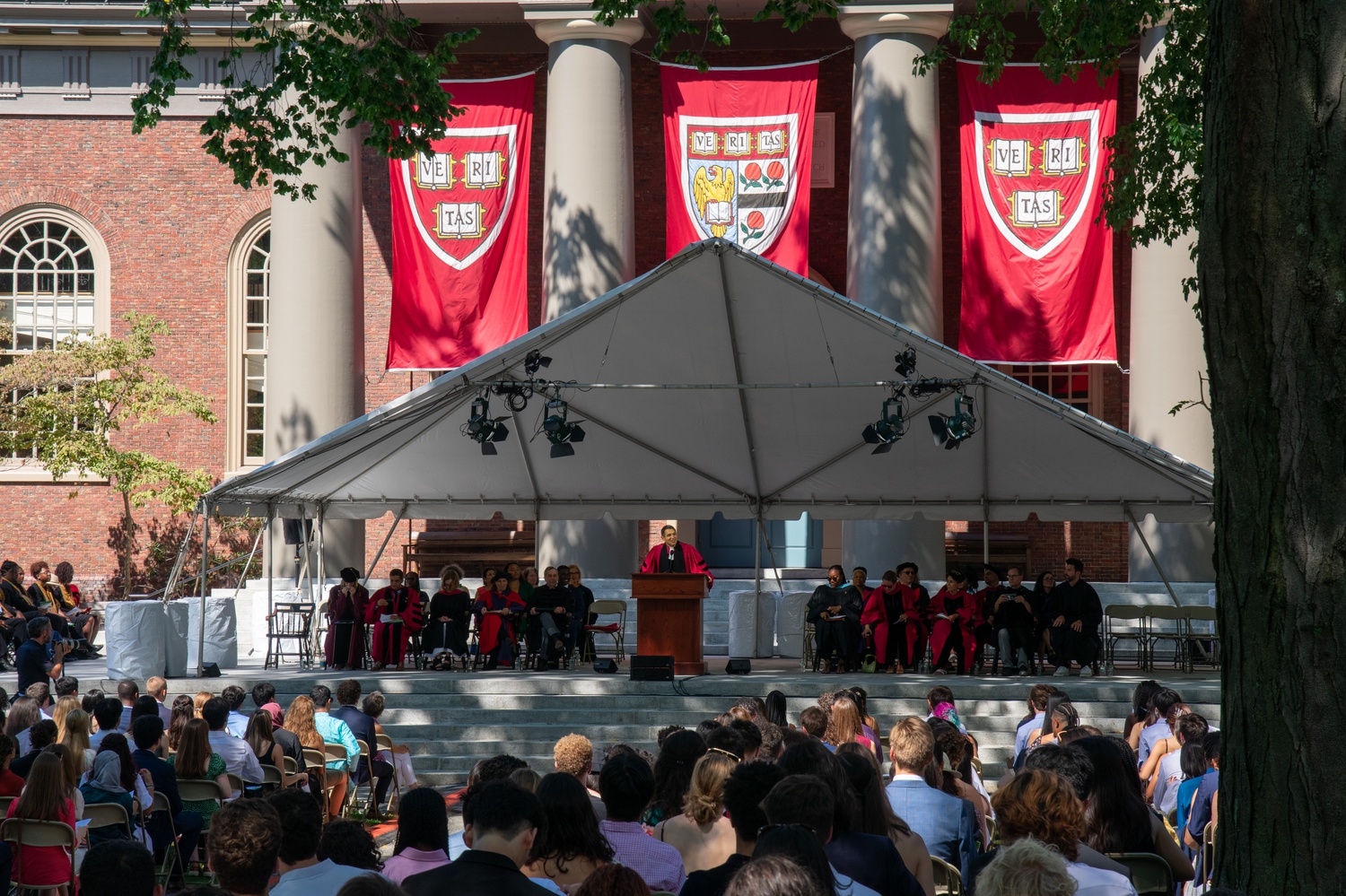 Rev. Matthew I. Potts concludes the Convocation ceremony with a blessing for the Class of 2026. By Julian J. Giordano

Many students in the College’s Class of 2026 said they enjoyed their Convocation, which marks their official start as Harvard undergraduates.

“Hearing the band for the first time, seeing all the choruses — I didn’t realize a lot of how amazing the organizations here are,” Eileen K. Ye ’26 said. “It’s really sinking in that we’re here.”