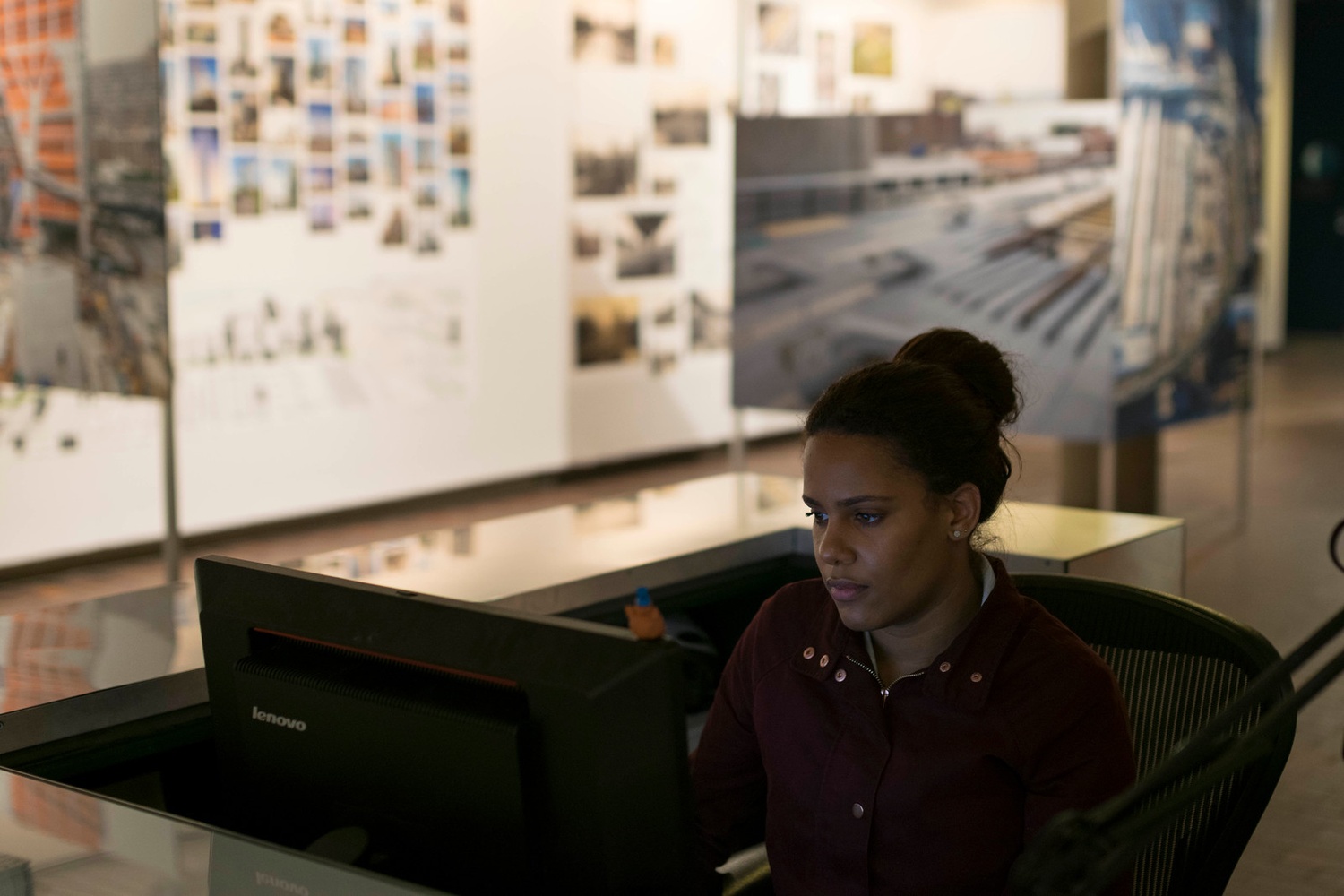 Yuleyca Ortiz, the security supervisor at the Graduate School of Design and one of the subjects of the series. By Grace Z. Li
By Grace Z. Li and Ruth Zheng, Crimson Staff Writers

Sometimes Doris Reina-Landaverde wanted to ask artist Annie J. Liang why she wasn’t painting a professor, or a famous person. Why her, a custodian working at the Extension School?

The goal of “Harvard Works 2.0,” an eight-part portrait series on exhibition in the Science Center, is to challenge the premise of this question.

Each painting is a stencil of a Harvard worker superimposed over different textures of Harvard walls.

Liang, who graduated from the Graduate School of Design this past spring, developed the idea for the exhibition in VIS2448: “Painting for Designers,” a class she took with Professor Ewa Harabasz in the fall of 2016.

For one assignment, the students were asked to draw on top of concrete, a ubiquitous texture in the Design School’s Gund Hall. Liang said she was inspired to capture the social landscape of the school — that is, “the workers, and the people who support the institution in all its activities.”

Despite their work being as foundational to the University as its physical structures themselves, the hours they dedicate to supporting the institution often go unnoticed, Liang said. She said “Harvard Works 2.0” integrates those who do maintenance work into the layers of the painting — reimagining Harvard’s history with Harvard’s workers at the forefront.

“We exist,” Reina-Landaverde said. “And we are here.”

“All the things, all the meetings, all the emails I have to be sending, talking, and doing to make this place run smoothly — a lot of people don’t see it because it is on the inside,” said Yuleyca Ortiz, the security supervisor at the GSD and one of the subjects of the series. “But it is very difficult to run a place.” 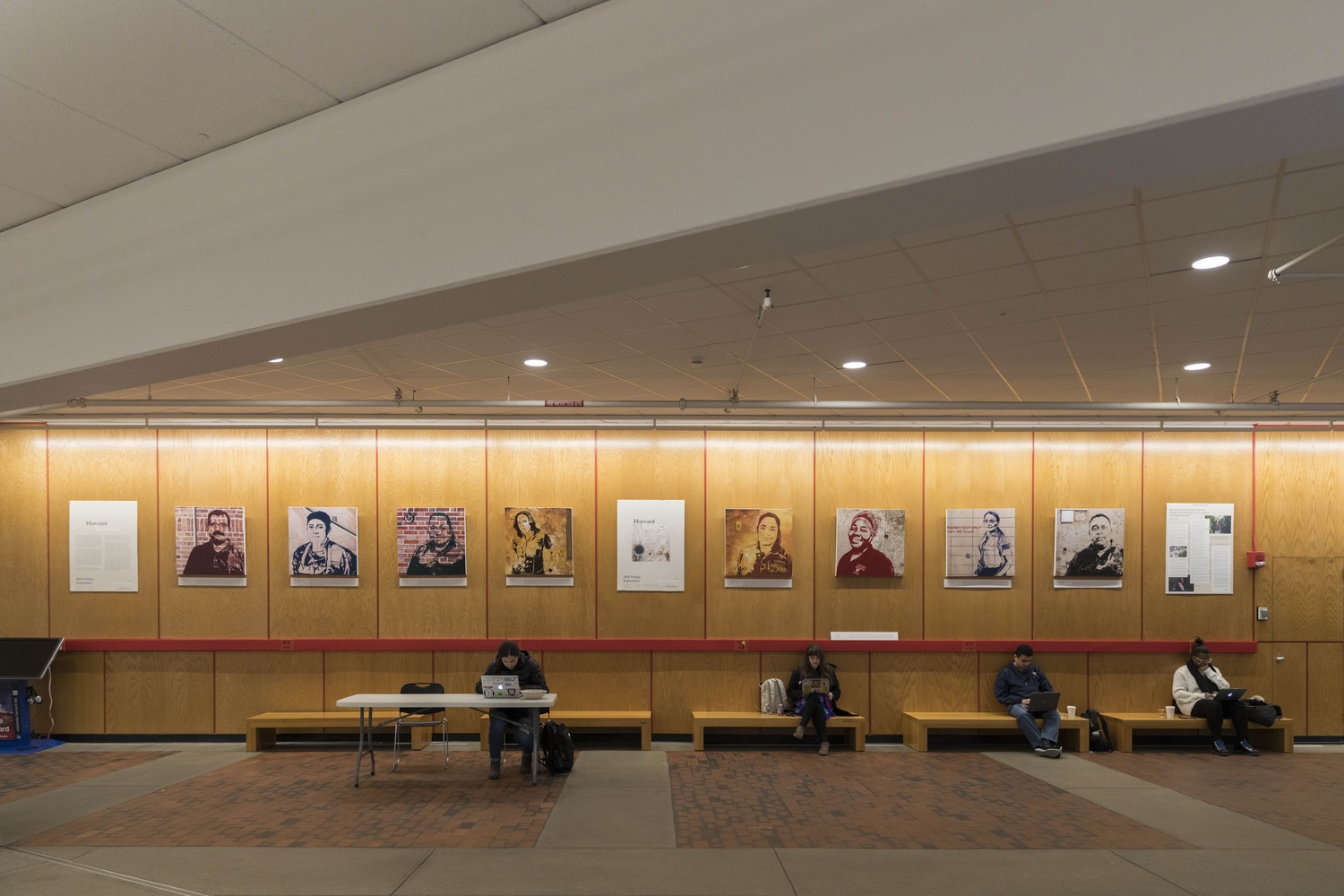 In addition to highlighting the work done by Harvard’s custodial and security staff, “Harvard Works 2.0” also raises awareness about the struggles Harvard’s workers may be facing.

Reina-Landaverde arrived in the United States from El Salvador in 2000 and is a recipient of Temporary Protected Status, a designation the U.S. Department of Homeland Security grants to certain foreign nationals who are unable to return to their country of citizenship due to unsafe circumstances like armed conflict or natural disaster.

TPS recipients can legally live and work in the U.S. and are immune from deportation. The status is temporary, but previous presidential administrations have largely left the program alone, allowing recipients to continue residing legally in the US.

The Trump administration, though, has moved to end the designation for foreign nationals from certain countries. Following the Trump administration’s efforts to repeal TPS, workers at Harvard have taken part in activism to defend TPS, holding multiple rallies, appealing to former University President Drew G. Faust to take action to protect workers from deportation, and calling on the University for greater legal aid.

The Dean’s Diversity Initiative — a standing committee at the Design School tasked with advancing inclusion — and John S. Wilson Jr., senior advisor and strategist to the President on diversity and inclusion, co-sponsored the show.

Wilson wrote in an emailed statement that he found Liang’s portrait project to align well with the values Harvard’s Task Force on Inclusion and Belonging outlined last year — especially since the project aims to increase visual representation of those who work at Harvard beyond the white academics and administrators who have historically occupied space on the University’s walls.

“That has become awkward, at least, because it is not entirely reflective of how Harvard has been evolving.” Wilson wrote, referring to the University's traditional decor. Organizers wanted to “exhibit the new and diverse images of some of the other key people who help make Harvard University the prestigious institution it is today,” Wilson wrote.

“We are [the] Harvard community,” Reina-Landaverde said. “We know we have to stick together.”

For Ortiz, her inclusion in “Harvard Works 2.0” was above all a reminder to herself that the work she puts in at Harvard has been paying off.

“It doesn’t matter that sometimes I feel like a failure, that I’m not doing my very best,” Ortiz said. Seeing that picture and the caption accompanying it, she said, confirms that “I am doing okay.”