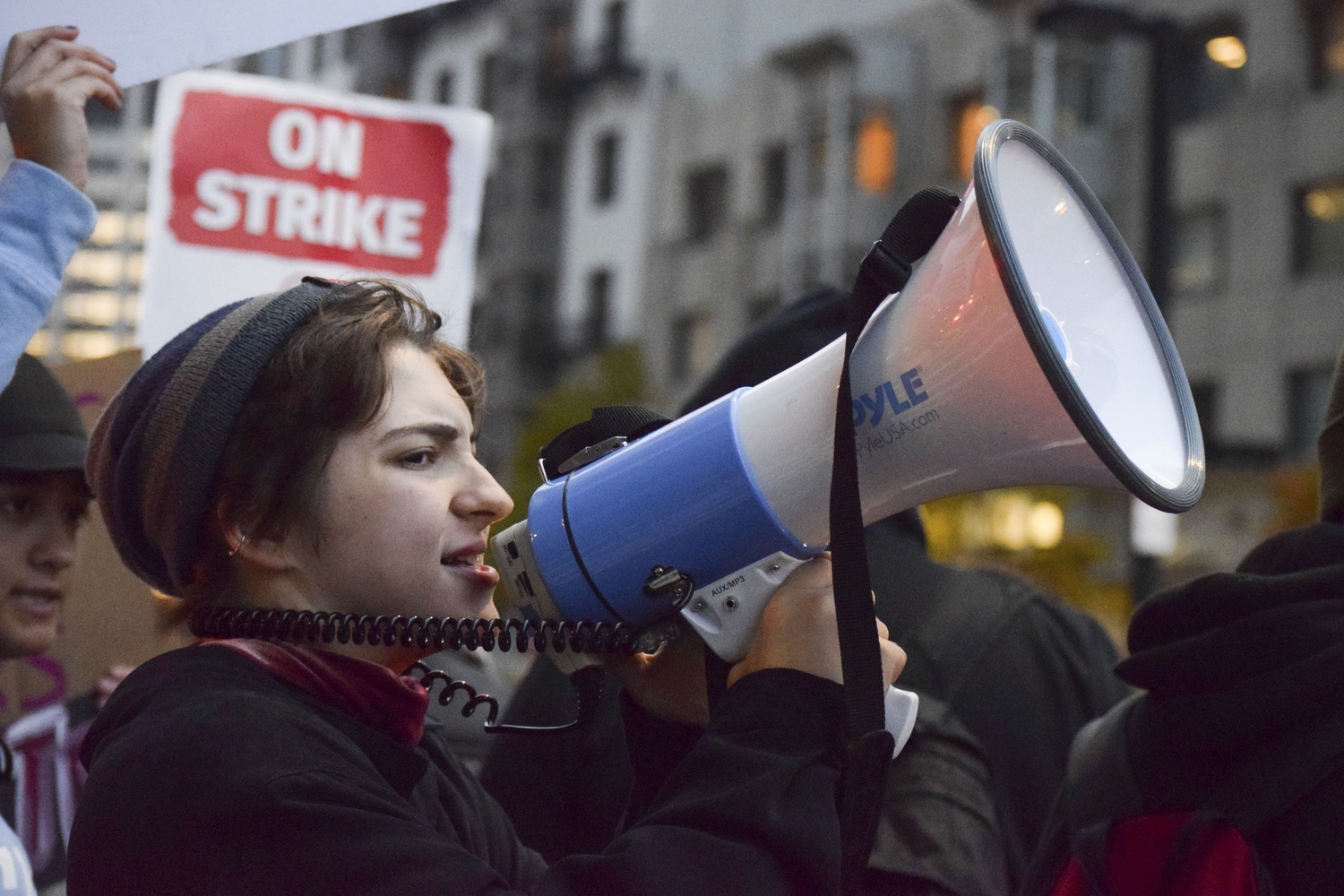 A protestor participates in a recent rally in downtown Boston that forms part of an ongoing strike by Marriott workers. By Amanda Y. Su
By James S. Bikales and Ruoqi Zhang, Contributing Writers

Members of the Student Labor Action Movement held a silent protest during a series of speeches delivered by top Harvard administrators Friday, urging them to boycott seven Marriott Hotels in Boston whose workers have been striking for over a month.

The protesters hoisted a sign that read “Check out of Marriott” in hopes of forcing administrators to take a position on whether the school will patronize Marriott hotels in Boston.

“Our eventual goal is to have Harvard eventually take a stand on the strike while it’s still going on,” said Saul A. Glist ’22, a member of SLAM who coordinated the protest.

The students’ protest comes as a strike at seven Marriott-operated hotels in Boston enters its fifth week — and amid a nationwide walkout at 23 Marriott-affiliated hotels in seven cities across the United States. Unite Here Local 26, the union representing the Boston hotel workers, is seeking higher wages, increased job security, and more comprehensive workplace sexual harassment protections in its ongoing negotiations with Marriott.

This is not the first time Unite Here Local 26 has earned Harvard students' support. In fall 2016, SLAM backed Harvard University Dining Services workers — who are also represented by Local 26 — during the workers' historic 22-day strike that rocked campus.

Though SLAM’s Friday demonstration was short-lived — Sanders staffers escorted the students out after about three minutes — the protest marked just one of bouts of student activism meant to convince University officials to signal their support for the striking workers.

SLAM members said they have reached out to University administrators including O’Dair and Dean of the Faculty of Arts and Sciences Claudine Gay over the past two weeks. Students hoped to schedule meetings with the officials and to persuade them to sign a “One Job Should be Enough” pledge promising they will not eat, sleep, or meet at any of hotels whose workers are on strike. The group has also urged student organizations not to hold meetings at the hotels; and SLAM members participated in another protest Thursday. 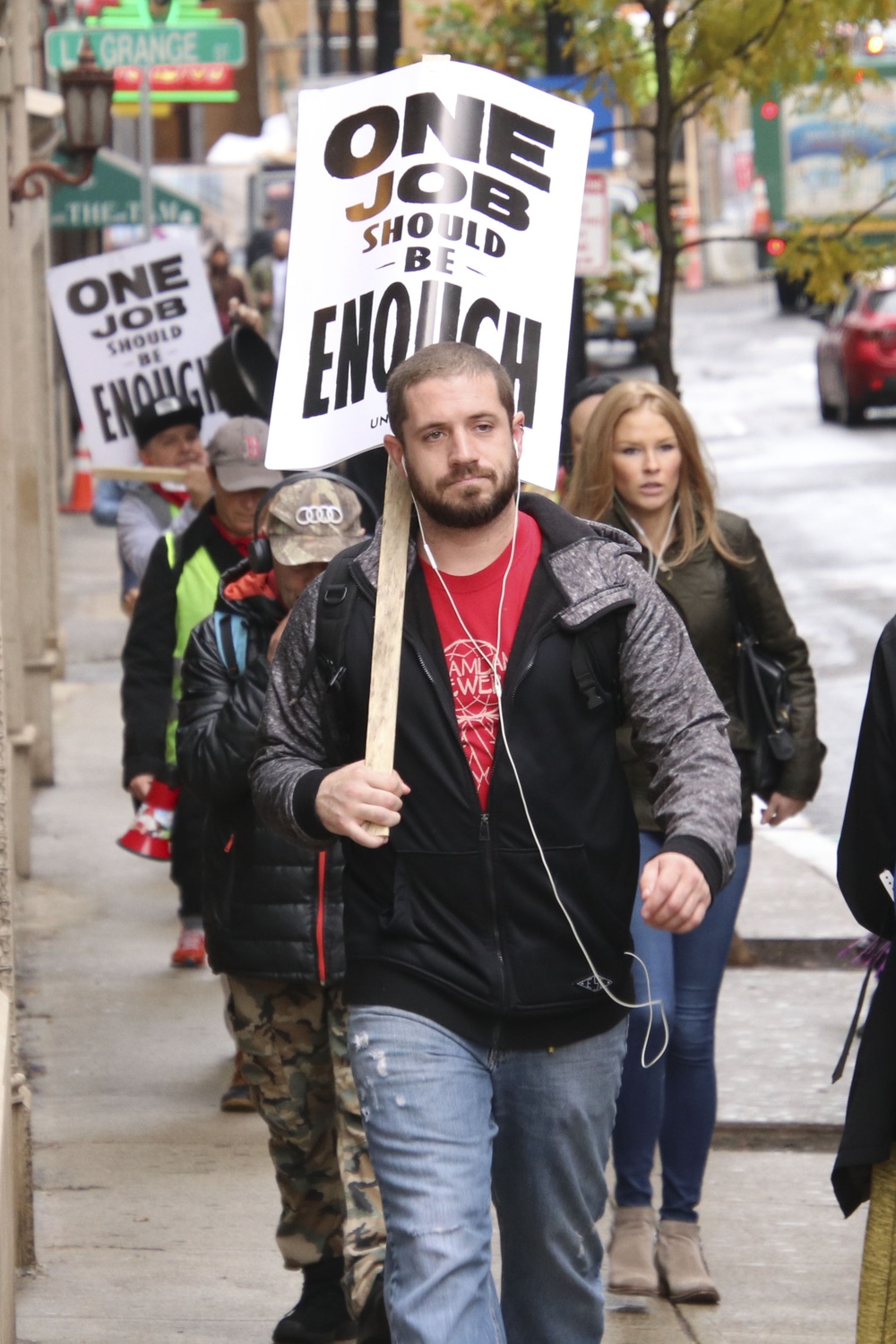 University administrators, however, have declined to sign SLAM’s pledges.

“Harvard supports fair labor management practices and it respects the legal process that calls for labor issues to be resolved between a union and an employer,” University spokesperson Jonathan Swain wrote in an emailed statement Sunday. “As such, the University is not taking a position on the current labor dispute between Unite Here Local 26 and Marriott International.”

“This was one of the more visible ways that we could get [Bacow] to see that Harvard students are invested in the strike,” said Ria Modak ’22, one of the students who unveiled the banner Friday.

She said she felt the protest was successful because it may make it easier for SLAM to get face time with administrators.

SLAM has already succeeded in getting at least one Harvard-affiliated group to cancel an event slated to take place in a Marriott-operated hotel. Harvard Undergraduate Women in Business relocated its Intercollegiate Business Convention from the Sheraton Boston Hotel, whose workers are currently on strike, to the Science Center on Harvard's campus.

IBC Co-Chair Charlotte E. Kim ’20 said holding the event at the hotel would have been “very wrong and “very hypocritical to our mission,” though changing the venue at the last minute created significant logistical and financial challenges for the group.

IBC invited two of the striking workers to speak at the conference. Their speeches “brought a lot of the audience members to tears,” Kim said. 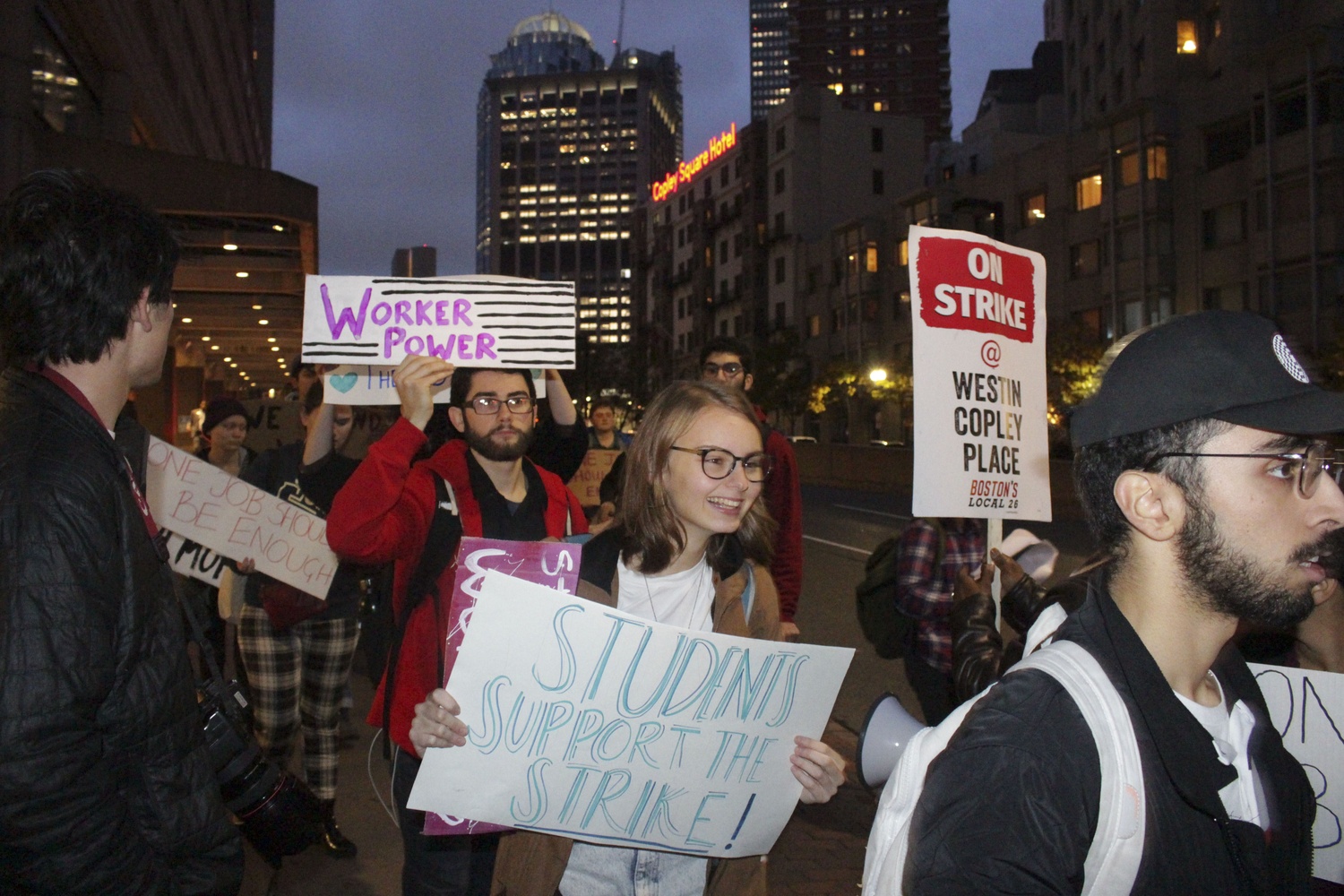 SLAM has not just focused its efforts on Harvard’s campus, though. Group members rode the T into Boston Thursday to join the picket line of striking Marriott hotel workers in Copley Square before marching towards another striking hotel while chanting, “One job should be enough.”

The workers are “striking from 7 a.m. to 7 p.m. everyday,” Glist said. “And the more people that we bring, the less time they’re on their feet.”

Some members of other Harvard unions — including SEIU and the Harvard Graduate Student Union-United Automobile Workers, which is currently engaged in collective bargaining with the University — joined SLAM on the picket line.

Some participants, from Harvard and other Boston-area schools, said they chose to join the protest because they felt a responsibility as students to support the strike and labor movements.

“Showing solidarity for other members of the union that represents workers on our own campuses was an important reason in this, too,” said Jesse L. Ryan, a student organizer from Tufts University who attended the protest.

Glist said he was happy with how the protest went.

“Our goal was to be in solidarity with workers, and let them take a break, and bring different people together, and we were very successful with that,” he said. “The numbers were large and visible, and we got a lot of attention.”

Union workers on the picket line said they were thankful for the student support.

“We are very grateful young people take our struggle seriously. They show a lot of courage,” said Henrique G. Fernandes, a picket captain and board member of Unite Here Local 26.

“We appreciate the students coming out to support,” she said. “It’s definitely encouraging to know the students in Boston along with the greater Boston community support us in the strike, and are standing up for workers in their community.”

In an emailed statement, a Marriott International spokesperson wrote the company is a “competitive employer that pays significantly above the minimum wage in most markets and provides generous benefits" and that “we remain committed to negotiating in good faith to reach a fair contract for all parties."

Though SLAM members ended Thursday’s protest by shouting “We’ll be back,” Glist and Modak said the group has not yet planned any definite future events.